Pituitary tumours: why are they so often missed?
By James F (Barry) Cullen

For ophthalmologists there are four types of pituitary tumour to be considered, three of which are named according to the hormone secreted, along with one non- secreting tumour which is the most frequent variety presenting to an ophthalmology clinic.

The tumours are as follows:

Prolactinomas or lactotrophic adenomas comprise 40% of all pituitary tumours. Ninety-five percent of these are microadenomas confined to the pituitary fossa and are often discovered on neuroimaging performed for other reasons. In women they produce the infertility amenorrhoea-galactorrhoea syndrome and in men may cause gynaecomastia and sex hormone deficiencies. They are usually referred to the eye clinic from the obstetrics and gynaecology or endocrine departments for routine evaluation, but because most of such referred prolactinomas do not reach sufficient size to compress the visual pathway a yearly review in the eye clinic is adequate.

Prolactinomas are treated medically with the dopamine agonists bromocriptine or cabergoline, usually lifelong and thus are best supervised in an endocrinology clinic. 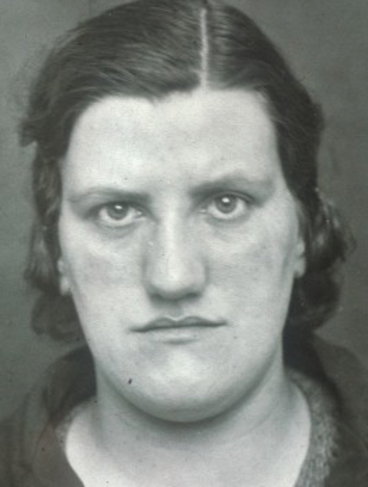 Figure 1: Photograph of patient with the classical facial appearance of acromegaly.

GH secreting or somatotrophic tumours cause acromegaly in adults and giantism in children. They are slow growing, tending to present late with visual symptoms and the adults are often missed because of other presenting problems such as hypertension and the early clinical features of acromegaly are often overlooked (Figure 1). These tumours are treated medically with somatostatin analogues such as octreotide and with supplementary hormones supervised in endocrinology. They require regular ophthalmological review usually six monthly with particular reference to their visual fields and may need surgery in the event of progressive field loss.

ACTH secreting or corticotrophic tumours cause Cushing disease and Cushing’s syndrome. They are usually of small size, confined to the pituitary fossa, treated medically and very rarely cause visual problems thus are seldom seen or referred to the eye clinic.

Non-secreting adenomas are often still known as chromophobe adenomas. Patients with these tumours commonly present in the first instance to an eye clinic and are often misdiagnosed with normal tension glaucoma, “unexplained visual loss” or, in younger patients, with optic neuritis. Unless the ophthalmologist keeps in mind that pituitary tumours are common, can occur at all ages including children and can present with minimal visual symptoms they will be missed. They are most often missed because many ophthalmologists do not perform a routine visual field examination not even by confrontation! These tumours will grow over a period of years, expand out of the pituitary fossa to impinge on the visual pathway above and produce visual problems.

Because patients harbouring such tumours are hypopituitary, having vague malaise, headache and other systemic symptoms, they have often attended other clinics before the presence of pituitary tumour is suspected and only then referred for visual assessment.

It is essential in the case of all pituitary tumours, including those diagnosed for the first time in the eye clinic, for the prolactin level to be obtained before making a decision on further referral, either to an endocrinologist or neurosurgeon. Furthermore, because all tumours as they enlarge will destroy pituitary function causing hypopituitarism, appropriate supplementary hormonal treatment is required and where surgery is planned this has to be arranged both pre and post operation. Postoperative patients also require long-term follow up in the eye clinic because of the significant incidence of recurrence but once stable six to twelve monthly review is sufficent. 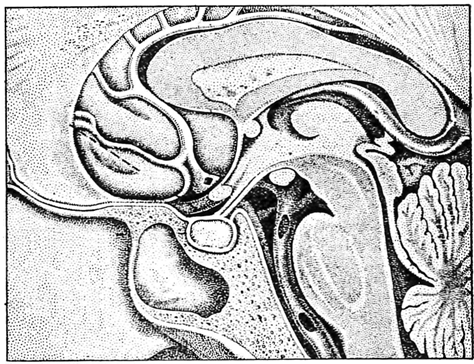 Figure 2: Lateral view of the anatomy of the pituitary fossa, visual pathway and third ventricle [2].

Figure 2 shows the anatomy of the pituitary fossa and gland and their relation to the visual pathway above. The fossa is covered by the diaphragma sellae which is perforated by the pituitary stalk which along with the optic nerve and chiasma above are surrounded by cerebrospinal fluid (CSF) in the chiasmatic cistern. The chiasma is usually situated directly above the centre of the fossa in the floor of the third ventricle and is 5-10mm above the fossa so that a pituitary tumour has to expand out of the fossa, fill up the CSF space above and thus be of substantial size before it impinges upon the visual system. Because of the partial decussation of the visual axons in the chiasma (Figure 3) the crossing nasal fibres are first involved, producing the classical bitemporal visual field defects of compression from a pituitary tumour. 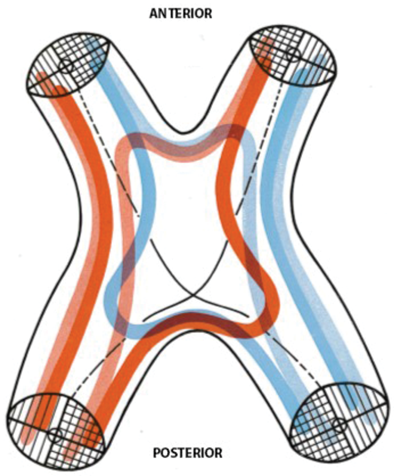 The reader will note that the correct name ‘chiasma’ is used here, not ‘chiasm’ as is now the version seen in most American and other non UK texts. The name chiasma is derived from the Greek word Xiasma or Xίασμα, meaning a crossing. Chiasma is also used throughout Duke Elder’s system [1] and by Traquair [2].

Figure 4: The different positions of the optic chiasma in relation to the sella turcica.
A = normal situation. B = prefixed chiasma. C = post fixed chiasma [2].

In about 20% percent of persons, however, the chiasma is not situated above the centre of the fossa but is either pre or post fixed (10% each) as shown in Figure 4. If post fixed, an expanding tumour may first come into contact with an optic nerve and present as an optic neuropathy with a central scotoma, thus be mistaken for optic neuritis. If the chaisma is prefixed, an expanding tumour will come into contact with its posterior part where the crossing macular fibres are situated, thus producing scotomatous defects. In some instances with post fixation an optic tract may be compressed with subsequent production of a homonymous visual field defect.

The relation of the chiasma to the adjacent blood vessels is also important. The internal carotid arteries (Figure 4), after emerging from the cavernous sinus, are below and lateral. The anterior cerebral arteries are also lateral at their origin then above the chiasma, connected more anteriorly by the anterior communicating artery. The posterior communicating arteries are more posteriorly situated below and behind, thus more in relation to the optic tracts. The nearest cranial nerves are the third and sixth inferiorly in the lateral wall and within the cavernous sinus respectively.

The following case report illustrates how a pituitary tumour can remain undiagnosed over a long period of time with consequent problems for the patient and his medical attendants.

A 26-year-old primary school teacher with 10 diopters of myopia was referred to the laser centre for evaluation prior to possible treatment. He had been seen since his school days by a number of different optometrists because of his high myopia and appropriate spectacles were prescribed and later contact lenses. In the laser centre he was noted to have a significant degree of exo deviation (exophoria / exotropia) so the opinion of a motility specialist was arranged, who advised surgical treatment. On further questioning he admitted to having intermittent headache and even though the optic discs were considered to be normal for his degree of myopia fortunately a brain scan was advised prior to the proposed surgery. The result of MRI scan is shown in Figure 5. 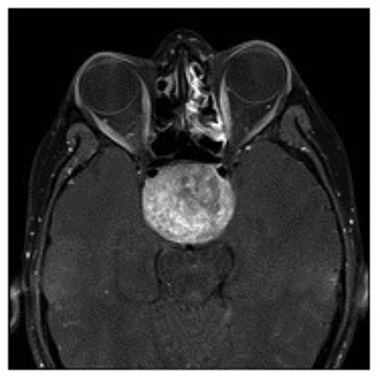 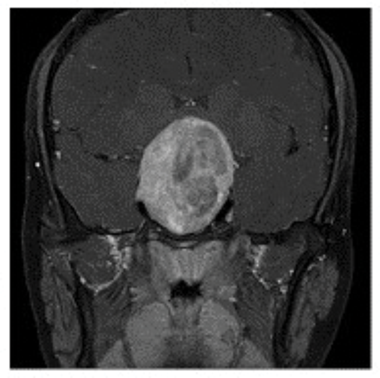 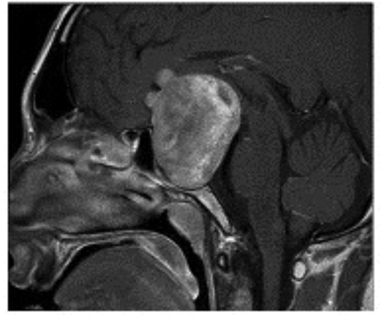 In the neuro-ophthalmology clinic he again denied any subjective visual problems apart from those associated with his high myopia. His acuity was confirmed as 6/6 N5 in each eye with normal colour vision, and the optic discs again could have been considered within normal limits for his degree of myopia. Now at last at this, his 16th eye examination, a confrontation visual field was performed and a complete bitemporal hemianopia easily elicited. Formal visual fields confirmed the bitemporal hemianopia with contraction of the residual nasal fields (Figure 6). His prolactin level was normal so he was referred urgently to neurosurgery. His trans-sphenoidal hypopysectomy extended to over three hours as a solid type tumour was encountered which was not possible to remove completely. At follow-up there was no improvement in his visual field defect but, as expected post-operation, the optic discs were now pathologically pale. He is on replacement hormonal treatment and requires long-term follow-up in endocrine, neurosurgical and neuro-ophthalmology clinics. 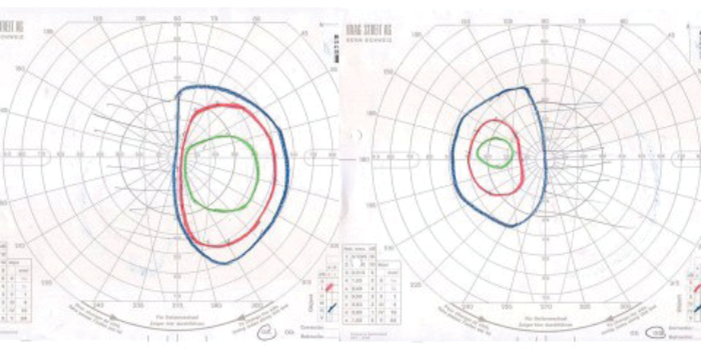 Note: This case report demonstrates the absolute necessity of routine visual field testing at least by confrontation by ALL ophthalmic practitioners including optometrists, general and subspeciality ophthalmologists as a routine part of every eye examination including those in children. 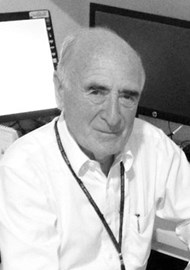