Pituitary tumours: why are they so often missed?
By James F (Barry) Cullen

As previously mentioned in this treatise [1] pituitary tumours are common, occur in all age groups and can present with anything from minimal visual symptoms to complete blindness in one or even both eyes. In a recent report from one neuro-ophthalmology clinic in Singapore 90 cases were seen over a period of nine months [2]. The relevant clinical features and investigation will now be discussed: 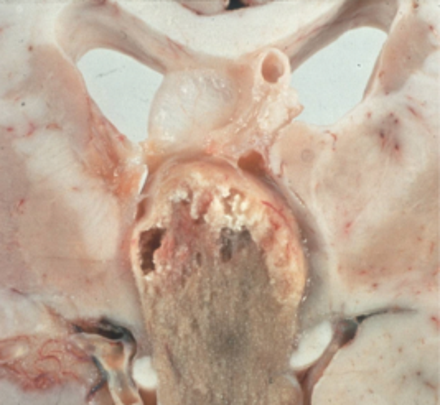 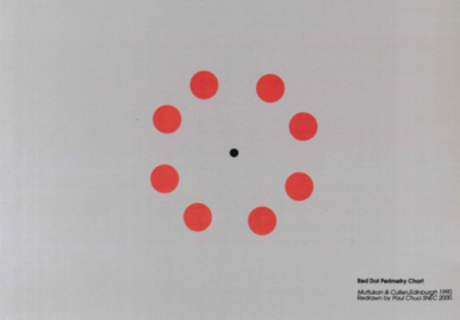 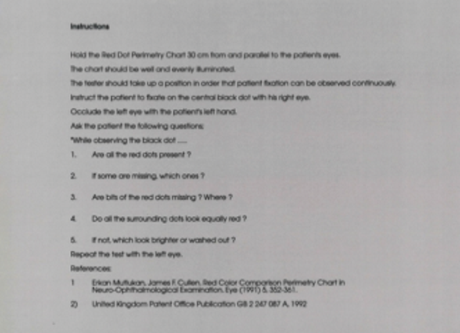 Figure 2: Red dot perimetry chart (top) with instructions for use on reverse (bottom).

In the eye clinic where non-secreting tumours are most likely to be seen the vital hormonal evaluation is the prolactin level and if this is normal the ophthalmologist has to make a decision on neuroimaging. A CT or MRI scan of the brain with contrast will reveal the presence of a pituitary tumour but is in essence only a diagnostic / screening investigation. A MRI of the pituitary area (not of the brain) with contrast is required by the neurosurgeon if surgery is being considered, and this investigation is best left to him / her along with arrangements for full pre-operation endocrine evaluation.

“If untreated a pituitary tumour will continue to expand slowly over months or years, most commonly upwards causing further compression of the visual pathway and eventually blindness.” 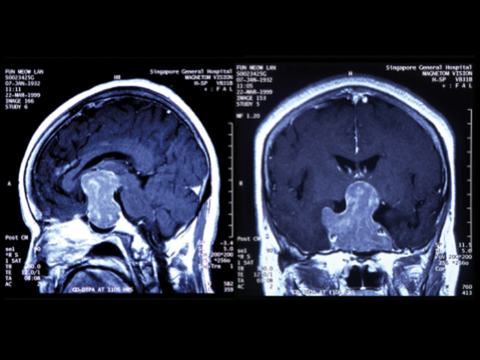 If untreated a pituitary tumour will continue to expand slowly over months or years, most commonly upwards (Figure 3, left) causing further compression of the visual pathway and eventually blindness. Lateral spread is into the cavernous sinus (Figure 3, right) when an ocularmotor palsy, usually the sixth, will develop. Once the cavernous sinus is invaded, a tumour in this area cannot be safely removed. Rarely a tumour can extend even further into the temporal or parietal lobe of the brain (Figure 4). 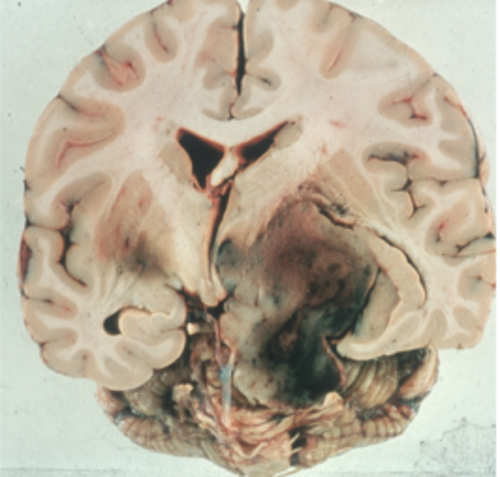 Figure 4: Pathological specimen of a large pituitary tumour extending laterally into
the temporal and parietal lobes of the brain with intra tumour haemorrhage.

Pituitary apoplexy is correctly defined as acute haemorrhagic necrosis of a pituitary adenoma leading to rapid tumour expansion accompanied by headache, lethargy, coma and increased intracranial pressure (Figure 5). Development of a cranial nerve palsy associated with tumour expansion is not apoplexy nor is a localised haemorrhage into a tumour (Figure 6) although these may result in an acute exacerbation of symptoms. 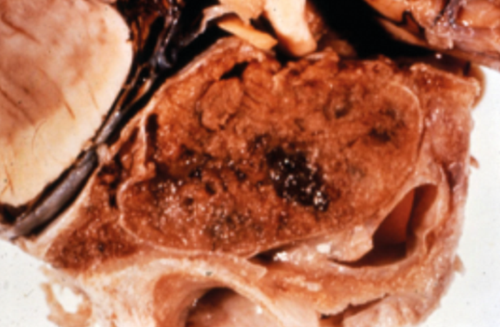 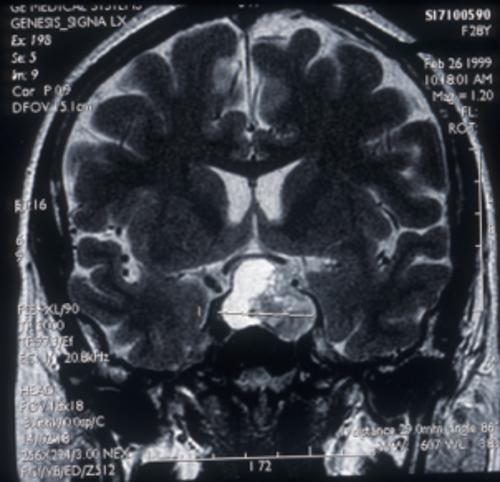 Trans-sphenoidal surgery is now the standard operation for pituitary tumours although some large tumours may require a transcranial approach. In many cases, improvement of visual function can occur within 24 hours of surgery. Overall 75-95% of patients improve in respect of visual acuity and or visual fields. Sometimes with longstanding tumours visual fields may improve after months or rarely after years.

In some centres routine postoperative radiotherapy is advised but this will result in severe hypopituitarism requiring long-term and expensive hormone replacement treatment.

The optic disc will always become pale after operation even if not so beforehand.

Pituitary tumours have a significant recurrence tendency following treatment, either medical or surgical, so patients require lifelong follow-up. Reported recurrence after five years following surgery alone is 7-35% but with additional radiotherapy the recurrence rate is reduced to 7-13% over five years [6].