The Last House Officer
Reviewed by Nicola B Aslam

The Last House Officer by Gwyn Williams takes us on a hilarious journey from first surgical house job to (accidental) ophthalmology trainee.

Things don't always seem to work out too well for Owen Morgan. Blindsided into a hasty marriage to the feisty Padma, he clings to his master plan to return home to his native Wales and continue training in general surgery. His timing, unfortunately but comically, coincides with the Medical Training Application Service (MTAS) fiasco and all does not fit into place as Owen had hoped.

His path is littered with competitive colleagues, unsympathetic consultants, obstructive secretaries, parochial parents and a volatile wife who seems to like the idea of being married to a surgeon a lot more than the reality of being married to Owen.

Gwyn Williams’ characters and dialogue are well observed, sometimes deadpan and eminently readable. I laughed out loud several times and think most readers, on either side of the scalpel, will find something with which to identify.

After reading The Last House Officer I feel a debt of gratitude to Patricia Hewitt "without whom this book would have been simply impossible." Read it and you'll feel the same. 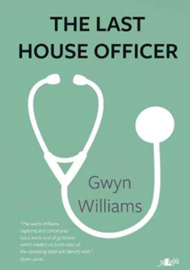 Reviewed by: Nicola B Aslam, Manchester.