As a specialist registrar training in Aberdeen there were two important lessons I learned which have proved to be invaluable over the years for two very different reasons. The first lesson learned was to never underestimate the wind chill factor of a stiff North Sea breeze whistling through Pittodrie stadium while sitting motionless watching Aberdeen FC. Two jackets were a prerequisite and for those unfortunate souls arriving in the winter from tropical climes there was an argument for upping the jacket count to three or even four.

The second important lesson was that timely systemic immunosuppression was fundamental in the effective management of sight-threatening uveitis. Prof John Forrester and Prof Andrew Dick were early pioneers of these treatments during my time in Aberdeen in the 1990s. Their dedication and unwavering conviction that this was the most effective way of preventing irreversible sight loss in uveitis patients inspired many trainees; myself included.

The systemic treatment of uveitis has evolved dramatically over the past decade and continues to do so. A book which reviews some of the current practices and looks toward novel therapies in the future is arguably long overdue. As with other books in this series the editorial board have commissioned authors from major centres in Europe and the USA. The result is a well balanced text which takes the reader on a logical and interesting journey from the earliest documentation of uveitis through to emerging biologics such as voclosporin and gevokizumab.

The opening chapter gives a short history of uveitis and the evolution of treatment over the years. Subsequent chapters discuss the use of corticosteroids and steroid sparing agents such as cyclosporin and azathioprine. A full chapter is devoted to mycophenolate mofetil on its own. Anti-TNF agents are discussed in detail and newer agents targeting interleukin are also presented. I found the chapter on intravitreal steroid implants to be particularly informative.

Overall I find it difficult to find any criticism of this excellent book. It reads well and is concise. Each chapter is well referenced and the illustrations are in the right context and well presented. It would make an excellent addition to any departmental library and I would thoroughly recommend it to any ophthalmologist who is involved in the care of patients with uveitis requiring systemic immunosuppression. Those who do not have an interest in medical retina may find it heavy going.

I left Aberdeen in 2002 to take up a consultant post in Paisley. Now, where did I put that spare jacket? 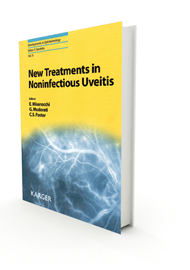