Radiation was discovered by Wilhelm Roentgen in 1895, and since then has been used to treat a variety of cancers. Its therapeutic properties have been widely used for ocular and periocular tumours and inflammatory disease, but the present era is also witnessing the evolution of a new application of radiotherapy in the management of age-related macular degeneration (AMD).

This book is a comprehensive work on ocular and adnexal radiation therapy. The first three chapters clarify concepts pertaining to the optical physics of radiation. They explain the principles of external beam teletherapy and plaque brachytherapy, and discuss the radiation parameters and treatment planning. The next section encompasses principles of curative and palliative modalities of uveal, retinal, adnexal and orbital neoplastic and non-neoplastic pathologies.

The chapter dedicated to radiation and AMD highlights that even though randomised controlled trials using radiotherapy have so far shown a limited benefit, the fact is that radiotherapy is antiangiogenic and remains a potential adjunctive candidate in the therapeutic armamentarium of neovascular AMD. I Ray, a robotic stereotactic radiation device is currently being investigated, and newer and safer devices have yet to make a debut.

The last two chapters discuss the complications associated with radiotherapy. It provides management guidelines, which may prove useful to clinicians who are often involved in advice after care and follow-up of patients who have received radiation.

The information is well laid out. Abstracts at the beginning of each chapter summarise the contents and these, accompanied by charts and photographs, complement learning.

This book is written by a panel of specialists. Although the target audience of this book is primarily the ocular oncologists, radiation physicists and therapists, nevertheless general ophthalmologists and multidisciplinary team personnel involved in the process of ocular and adnexal tumour therapy will also benefit from the book. This book could also serve as a useful source of reference and information for libraries. 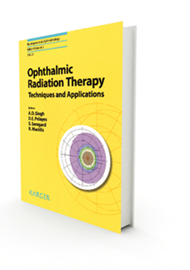