The Arclight: A ‘pocket’ ophthalmoscope to revitalise undergraduate teaching?
By Sahib Y Tuteja

Ophthalmoscopy should be a core skill for every doctor and should be firmly embedded in the undergraduate curriculum similar to the unquestioned position of the stethoscope. The simplicity of the Arclight means it is easy to useand, importantly, to learn to use.

Ophthalmoscopy is considered one of the more difficult clinical skills taught to medical students. When I picked up a direct ophthalmoscope for the first time, I had no idea how anyone could truthfully see anything with it. It took many hours of practice during my ophthalmology placement before I began to feel comfortable. My medical school had to organise extra practical classes as most struggled to make sense of what they were supposed to be viewing. Given the brief undergraduate ophthalmology training provided in most UK medical schools [1], many students fail to gain any real confidence in ophthalmoscopy, which has slowly led to some medical school deans and even ophthalmologists wondering if it is worth teaching this skill anymore. The mindset seems to have become that ‘eyes’ are just too hard. With the increasing availability and affordability of digital fundal imaging devices the value of continuing to teach ophthalmoscopy is being questioned, as highlighted in a recent debate published in Eye [2,3]: ‘Direct ophthalmoscopy should be taught to medical students – Yes/No’.

Most UK students now only spend five to ten days in compulsory ophthalmology training [1]. It is a challenging to acquire the skill of direct ophthalmoscopy in this short time, with many becoming disillusioned with their limited progress. Combined with the intimidating price (anywhere from £96 to well over £500 [4]) to purchase an ophthalmoscope, few see the worth of buying and owning their own device. It is deemed a low priority. A stethoscope, however, is superficially easier to use and initially more rewarding, and at around £60 [5] is more affordable and consequently a ubiquitous piece of diagnostic kit around the necks of students and junior doctors; it would be unthinkable not to own one.

I believe, however, that ophthalmoscopy should be a core skill for every doctor and should be firmly embedded in the undergraduate curriculum similar to the unquestioned position of the stethoscope.

Arclight Medical, a Liverpool based company, has addressed these challenges in an imaginative way by developing a new ophthalmoscope called the Arclight that may help to revitalise undergraduate ophthalmoscopy teaching.

After initial forays into visualising the retina by Babbage in 1847, Helmholtz created the first practical working ophthalmoscope in 1851 [6] using an oil lamp as the light source. It took more than half a century of further refinement to achieve the appearance of the self-contained instrument we use today, with its internal electric filament light bulb powered by a battery in the hand grip [6]. The electric light source then evolved from the early incandescent filament bulbs to brighter and whiter halogen varieties. As hands, eyes and heads are a constant, the ergonomics and design appearance hardly changed over a hundred years; an instrument bought in 2016 doesn’t look so different to one that could be bought a century before. Modern devices are designed to last a career, crammed with features and expensive optics.

The configuration of ophthalmoscopes has been a presumed design orthodoxy and combined with the historical physical limitations of large batteries and filament bulbs has led to stagnation in the format of devices, bringing to a near standstill any fundamental changes towards adoption of new technology and miniaturisation.

Many instruments come as diagnostic eye and ear sets where ‘heads’ can be removed from the body and swapped. While this provides flexibility, the mechanical complexity and duplication of connections adds unnecessary volume and weight. In addition, the handles are typically still designed for large AA cylindrical batteries. The reflecting mirror or prism, filter and stop options and disc of correcting lenses all contribute to a relatively large and cumbersome device, such that even so-called basic or ‘pocket’ ophthalmoscopes are not in reality that intuitive to use or even very pocketable. 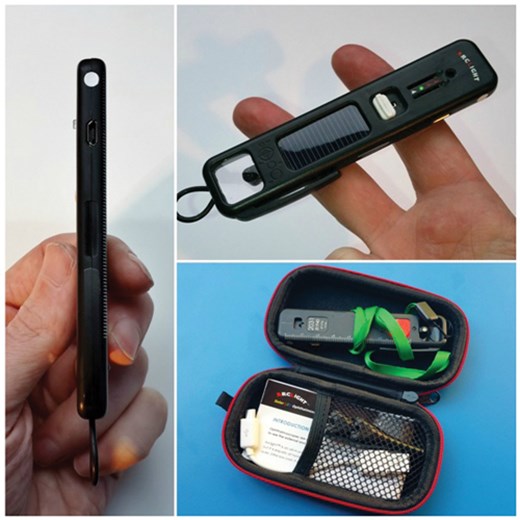 Figure 1: The Arclight: (clockwise from left); side view; rear view illustrating the ophthalmoscope-end, the loupe-end and the solar panel; the complete kit includes a carrying case, charging cable, instructions, two disposable speculae (4.5mm and 2mm) and a lanyard.

The ‘Arclight’ (Figure 1) is a new miniature, very low-cost, all-in-one ophthalmoscope-loupe-otoscope born from the need for affordable diagnostic eye care tools in low-income countries and a desire for ophthalmoscopy to regain its place in the toolkit of doctors in any resource setting.

Ophthalmoscopes are key to diagnosing many of the most common blinding conditions in resource poor settings, yet in some cases there is only one functioning device for every five million people [7]. A recent study from Tanzania demonstrated that The Arclight worked just as well (and possibly even better) than a conventional and more expensive device [8]. The Arclight has proven to be such a reliable and practical screening tool in the field that it is now on the International Agency for Prevention of Blindness (IAPB) Standard List of recommended devices for use in emerging markets [9].

Closer to home, the Arclight, if backed by the people that matter, has the potential to reignite interest in undergraduate ophthalmoscopy once again. As well as its breakthrough cost (Likely to cost £35 per unit for medical students in the UK and £50 for other healthcare professionals), the Arclight is undoubtedly the smallest and lightest ophthalmoscope ever made. 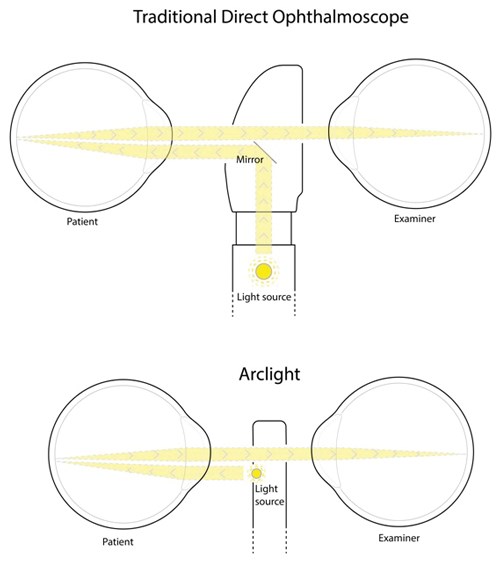 Figure 2: Simplified light paths from an Arclight compared with a conventional direct ophthalmoscope.

It employs some simple yet ingenious design strategies: the light source is an LED (a patented feature) and being small, bright and cool allows it to be mounted directly below the sight hole, facing the patient. This eliminates the need to reflect the light source within the body of the device, creating a much slimmer profile (Figure 2). This also leads to a more efficient use of the available light, and with LEDs only requiring a small fraction of the power needed to drive a filament bulb, standard chunky batteries can be substituted for small flat rechargeable lithium ones, again allowing miniaturisation of the device. The lower power battery can then be charged by an integrated solar panel on the surface of the device, negating the need for replacement batteries or mains driven recharging pods: a genuine ‘off grid’ device.

Being purposely stripped of rarely used features simplifies the design and further reduces size and cost. This makes it attractive to medical students as it is more affordable and, importantly, incredibly easy to use and to learn to use. Despite being the size of a marker pen and weighing only 18g, the device also includes a X4 magnification loupe which doubles as an otoscope when a speculum is added. The end result is a multi-function device that is sleeker and lighter than your average smartphone. You switch it on, and use it. 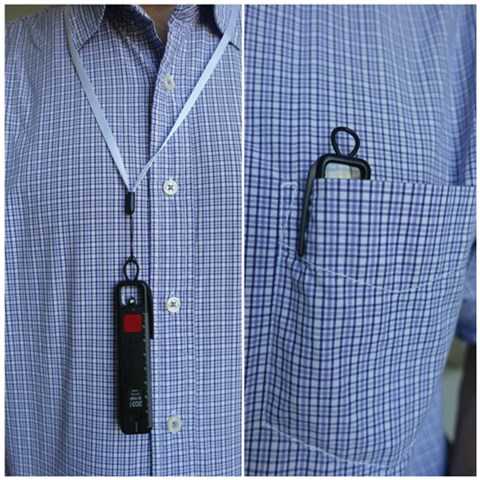 Figure 3: The Arclight can be worn around the neck (left) or clipped onto a shirt pocket (right).

I’ve been using the device for the past few months now and so far my experience has been very positive indeed. It clips neatly into my shirt pocket (Figure 3), and is always to hand for opportunistic fundus exams on the wards. It’s easier to operate and manoeuvre than a conventional device, letting me work faster. As it is very thin you can get it closer to your own eye and closer to the patient’s eye; and just as with looking through a key hole you gain a wider and more stable field of view into the room (the eye). Being less ‘medical’ and ‘scary-looking’ I’ve found it’s great for putting young children at ease. And if I lost it, or more likely someone ‘borrowed’ it, given its cost I’d not fret.

Of course such a basic device isn’t perfect; its few corrective lenses range only from -6D to +4D in big steps, and it doesn’t have those occasionally handy filters or aperture size options, nor is it possible to finely tune the light output level, only having two settings. The myopic limitation was apparent when I was asked to examine someone with a -10D refractive error. Such high refractive errors are rare though, with the device working well for the vast majority of the population, particularly those in Africa where extremes of refractive error are less common [10]. Interestingly, the loupe end acts as a great direct ophthalmoscope in aphakic eyes. Its diffuse light output surprisingly is a bonus not a flaw as it gives a smooth even view with no sharp edges. Likewise, the ‘warm’ white LED light appears to be a good balance between crisp colours and avoiding media backscatter. Specialists may wish a macular beam but for the generalist it seems a masterpiece of design, minimising the deficits and maximising the positives. 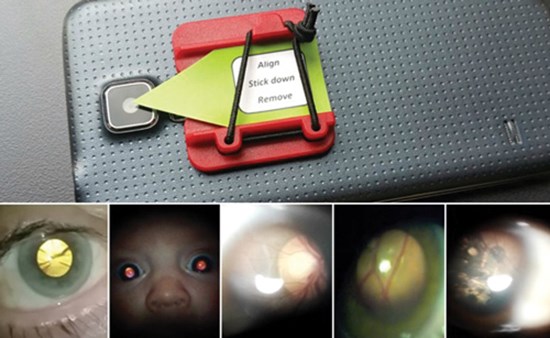 Figure 4: The Arclight can be clipped on to a mobile phone to capture still images or video:
(from left to right); cortical cataract; normal red reflex in an infant; optic nerve; retinal vessels; toxoplasma scars.

I’m convinced of its potential, especially as a training tool, and wish that I’d had one available when I first learned fundoscopy. It is also possible to clip it to a mobile phone camera and take still images or video (Figure 4), which is great for explaining to fellow students what they are actually supposed to be seeing. In short, its low cost and raw usability should make it a ‘best buy’ for progressive medical students everywhere. While it may not be compulsory in all medical schools [1], ophthalmoscopy is still listed as an essential skill for foundation year assessments [11], and this device would allow students to become good at it from an early stage in their career. Practice, ability and confidence would all go together. Cardiac auscultation is an extremely difficult task, but medical schools still teach it. Similarly, ophthalmoscopy is something that needs to be encouraged, reviewed regularly, and worked at until mastered and, in my opinion, the Arclight appears to be the device to revitalise undergraduate ophthalmoscopy teaching.

A number of as yet unpublished quantitative and qualitative trials from Malawi and Scotland have shown the Arclight to be easier to use, more accurate at identifying clinical signs and a superior device for medical students to acquire ophthalmoscopy skills compared to traditional devices [12] [13] [14]. Additionally the evaluation exercises have confirmed the design features to be suited to low and middle income settings. We congratulate the manufacturers on creating a device that is practical for both resource rich and poor countries alike.