Medical students spend far too little time in clinical ophthalmology, barely a week in a whole five year course. A week usually taken up by learning very basic facts about the eye and about the specialty, which means that any meaningful knowledge about iritis, angle closure glaucoma and other causes of the ‘red eye’ are usually learnt while being told off by an ophthalmologist as a junior doctor after an inappropriate referral.

Nikhil Kaushik attempts to address this with his introductory DVD Ophthalmology for Medical Students which is intended to be watched by students before starting their one week placement.

There is more than an hour of material presented, with plenty of pictures, diagrams and videos of common conditions that the medical student needs to know about, handily split into 10 different chapters. The narration is clear and concise and Mr Kaushik appears in the DVD himself both earnest and knowledgeable. The material presented is basic in nature but is exactly what the medical student, with no assumed prior knowledge of ophthalmology, needs in order to make the most of the placement. There are snippets from a cataract operation included as well, albeit of an unusual technique, which medical students unable to reach theatre may find valuable.

Whilst it must be said that the commentary is full of enthusiasm and essential details, the background to a significant portion of the narration is an extensive library of pictures which appear to be taken from Google images. During the narration the picture is either zoomed out of or zoomed into and while in the beginning this may be regarded as a charming feature, towards the end it becomes a little exhausting. Despite this the DVD is very watchable, contains the right amount of information at the right level for medical students and I highly commend Mr Kaushik for taking the time and energy to produce it. 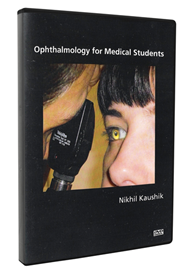 Price: £10.00 (via Amazon.co.uk or by emailing studio@knewproductions.co.uk)