‘Deal With It’ is a pack of scenario revision cards. The game is designed to act as a study and training aid for optical professionals. The rules allow a user to self-test or can be used in pairs or in larger groups. The cards are nicely designed. The information on the card is clearly laid out. The cards look nice and feel good quality. I imagine they would wear well if not abused.

The game is played by selecting two cards: a scenario card (what you have to deal with) and an action card (how you have to deal with it). You then use your communication skills to ‘Deal With It’. With the combination of action cards and scenarios there is a significant amount of variability (500 different scenarios – we didn’t count but the box says so). We found it was a good self-test to take each scenario and play through all of the action cards. This often ended up with us having slightly different ideas and combining our answers to ‘deal’ with the patient as if they were in practice and it allowed us to reflect on our own practice by observing each other. The rules were clear enough so we got the idea of what was required but they allowed us to use our imagination and invent new ways of playing.

As an example, you could pick the action card: ‘Explain: In language appropriate for your patient and anyone accompanying them, explain their prescription or condition.’ And this could be alongside the following scenario:

‘Karen, 17, failed the licence plate test when she went for her driving test. She hasn’t noticed any other problems. Karen doesn’t think she’ll suit glasses and is keen on contact lenses if she needs a prescription.

Playing ‘Deal With It’ certainly got us thinking. The game is a useful tool to highlight any areas that may need further study or practise in communicating, there are no practical skills required to play the game. The scenarios are realistic although not always common. We felt the cards would be most useful to students studying for exams like the OSCEs, although the game may make staff training more exciting.

While the conditions are varied, we felt they could be more specific at times to allow for more accurate management. While this does allow the players to use a bit of imagination, if we had different ideas on severity or how the patient had presented then we could end up playing two separate scenarios. Without an answer card this could lead to confusion and cause worry while studying for that exam. We also felt that answering questions from the patient or their carer may be easier if there were some suggestions of questions, especially for players with less clinical experience. Our feeling was that some scenarios were definitely better suited to some action cards than others.

We felt it would be helpful to have a more experienced colleague present to observe and provide feedback or suggestions. An answer card may have been helpful as sometimes we did not know what exactly was expected in our answers, though we appreciate that the creator was hoping to generate discussion rather than give prescriptive answers. We also would have enjoyed a more competitive element to the game, such as the option of some sort of scoring system, but maybe that is just our nature. Overall, we felt this would be a very useful study or training game for clinical professionals with an interest in eyes early in their careers. Or perhaps on a journey with optical friends – because we all know you’re going to talk about eyes the whole way anyway! A refreshing look at studying and communication training. 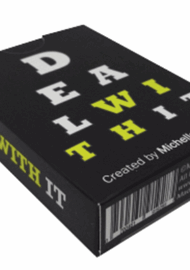