Clearly: How a 700 year old invention can change the world forever
Reviewed by Ahmed AbdelMaksoud

“If you are reading this, there’s a one in two chance that you’re doing so with a pair of glasses or contact lenses. Just imagine what your life would be like without them.”

Most of the people living in this blue-world quickly get overwhelmed by personal, social and professional endeavours. Very few actually try and leave the world a little better than they found it. James Chen sets a good example his book Clearly. 2.5 billion people on this planet still struggle to see because of an error of refraction! Yes, you’ve read that correctly. He goes on to lay down the barriers to solving this problem. Problems like a shortage of opticians, the distribution of glasses and the varying cost of spectacles. He contemplates how the same pair of glasses can cost as little as two dollars in China and $600 in the United States and equivalent in the UK.

It reads in parts like a story and beautifully illustrates how refraction works. It outlines different eye conditions in an easy and simple to read manner. It’s not a book aimed at just eye care professionals. The conditions are explained clearly in layman’s terms. From the discovery of glass covering a Libyan desert, to the invention of lenses, the author takes us on a journey across history and geography, allowing us to appreciate the simple invention we casually wear on our nose. He then endearingly shares some stories about how efforts made by the ‘Clearly’ campaign and others managed to change the lives of people across the world.

The book points out some modern efforts to solve the crisis, such as phone apps, fluid-filled adjustable spectacles and 3D printing. But are those solutions unrealistic or expensive? Quite the opposite. The author argues if people in the least privileged parts of the world still have access to mobile phones, then surely we can do better.

This book is an account of a man on a mission. He invites you to go on a journey to a world where people can see. Not the sort of people you see in London riding the tube to work. But the kind you see in the news, the ‘statistics’ of millions living in less privileged areas in sub-Saharan Africa, of children robbed of their right to sight, either because of lack of awareness, diagnosis, cost, or even social stigma from wearing glasses. “Now is the time to act.” 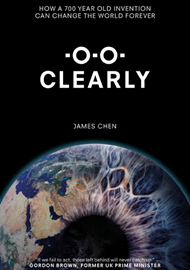