Brain tumours in adults: the essentials for an ophthalmologist
By James F (Barry) Cullen

The author provides a review of the common intracranial tumours in adults (other than pituitaries) which may present to an ophthalmologist.

Primary malignant brain tumours comprise 3% of adult cancers but with an ageing population such tumours are becoming more common and they occur sporadically at all ages.

We all know or hear about prominent people or acquaintances with such conditions, as I began to write this the funeral of Senator John McCain, who had a brain tumour, was about to take place in Washington DC. The famous Spanish golfer Seve Balesteros also succumbed to a brain tumour some years ago at age 54.

A recent paper in this journal [1] illustrates the commonest causes of visual impairment in European adults, headed by the usual culprits of macular degeneration, glaucoma and cataract, but the largest proportion of 30% are recorded as ‘others’. It is important not to ignore these and to point out what are the main causes among these ‘others’. Certainly optic nerve diseases will be the commonest among them, and in fact optic neuropathy is now one of the commonest causes of blindness in both adults and children.

It is important to recognise the difference between intracranial and true brain tumours. Pituitary tumours, which have already been reviewed in Eye News [2,3,4], are the commonest intracranial neoplasms encountered in an eye clinic and are also the commonest cause of a compressive optic neuropathy.

This review will deal with the common intracranial tumours in adults (other than pituitaries) which may present to an ophthalmologist, and it should be remembered from the outset that by far the commonest intracranial tumour is a metastasis. Brain tumours can produce raised intracranial pressure either by direct mass effect, vasogenic oedema or obstructive hydrocephalus and present with papilloedema. The latter condition has been reviewed earlier in this journal [5] but the actual mechanism of its production as per Hayreh [6] is worth recording again and is as follows:

Stage 2: Rise of CSF pressure in the sheath of the optic nerve (ON).

Stage 3: Rise of tissue pressure in the ON.

Stage 4: Axoplasmic flow stasis in the ON axons in the surface nerve fibre and prelaminar layers.

Stage 5: Swelling of the nerve axons in the optic nerve head.

Stage 7: This swelling secondarily compresses the low pressure venules in the optic nerve head resulting in venous stasis, fluid leakage and accumulation of extracellular fluid, i.e. papilloedema; thus the vascular changes seen are secondary to the earlier stages listed above. Note that papilloedema is not caused by compression of the central retinal vein as it crosses the subarachnoid space of the optic nerve as originally thought to be the case.

If papilloedema persists or the cause not treated, the optic nerve axons will atrophy and vision will be permanently lost with gradual obliteration of the visual field from the periphery inwards, and post papilloedema optic atrophy will become apparent. One must remember that in the presence of such atrophy and recurrence of raised intracrancial pressure (ICP) the disc(s) will not swell again.

It is easy to say nowadays that a brain MRI scan with contrast will solve all ones problems with the diagnosis of a brain tumour, but the correct scan has to be ordered in the first place and then correctly interpreted. For the ophthalmologist, clinical evaluation of the optic discs and visual fields, along with a comprehensive history and full neuro-ophthalmological examination will usually lead to the suspicion of a brain tumour being responsible for a patient’s problem.

Primary brain tumours are divided into intra-axial lesions arising within the brain parenchyma, i.e. gliomas, and extra-axial tumours arising outside the parenchyma usually from the meninges, i.e. meningiomas. These will now be discussed in relation to their neuro-ophthalmological relevance. 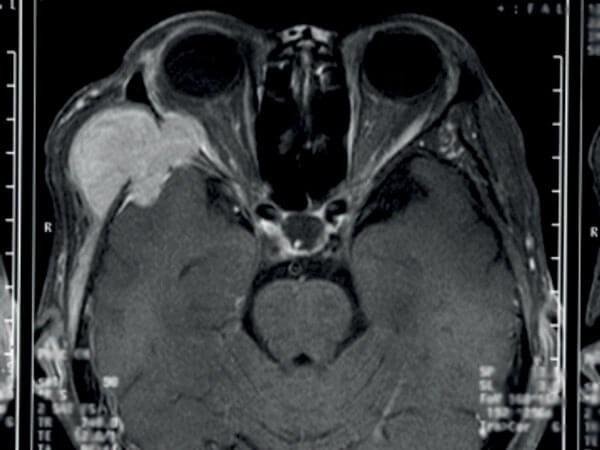 Meningiomas comprise 25% of intracranial tumours and are most commonly located in order of frequency along the convexity, parafalcine area, sphenoid ridge, tuberculum sellae and olfactory groove. Sphenoid tumours are the commonest encounter in the eye clinic because of the sphenoid bone forming the lateral orbital wall and its close relation to the visual pathway and ocularmotor nerves. Sphenoid ridge tumours are divided into those arising from the outer, middle and inner thirds; outer and middle ones are relatively silent unless they erode the greater wing and invade the orbit as seen in Figure 1. Inner third tumours are in close proximity to the superior orbital fissure and optic canal thus can present with nerve palsies or a compressive optic neuropathy. 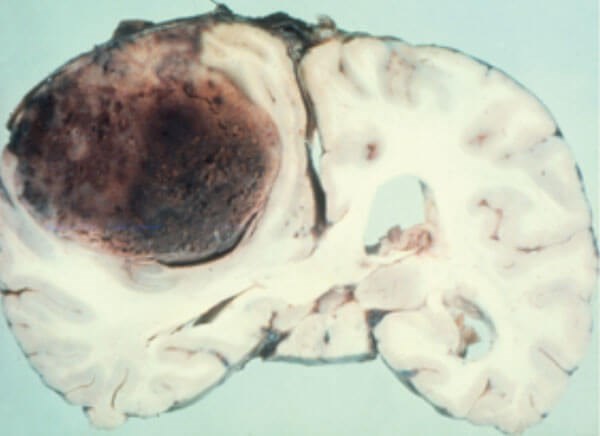 Meningiomas arising from the tuberculum sellae cause early compression of the optic nerves or chiasma and can be mistaken clinically for a pituitary tumour or aneurysm. Meningiomas arising from the peripheral meninges grow slowly indent, compress the adjacent brain as seen in Figure 2, and if arising in the parietal or occipital areas may present with homonymous visual field defects. We also encounter patients with large frontal meningiomas originating from the falx, crista galli or olfactory groove (Figure 3) presenting to the eye clinic with headache and minimal general symptoms, but in most of such cases papilloedema will be present leading to the diagnosis.

Intra-axial gliomas arise from the brain connective tissue glial cells and include astrocytomas arising from the astrocytes, and the less frequent oligodendrogliomas arising from oligiodendrocytes. Gliomas are graded I to IV according to the World Health Organization (WHO) classification from their histology. The grade I pilocystic astrocytoma being the least aggressive, while grade IV tumours comprise the glioblastoma multiforme (GBM) the most aggressive brain tumour with a survival time of only about one year. 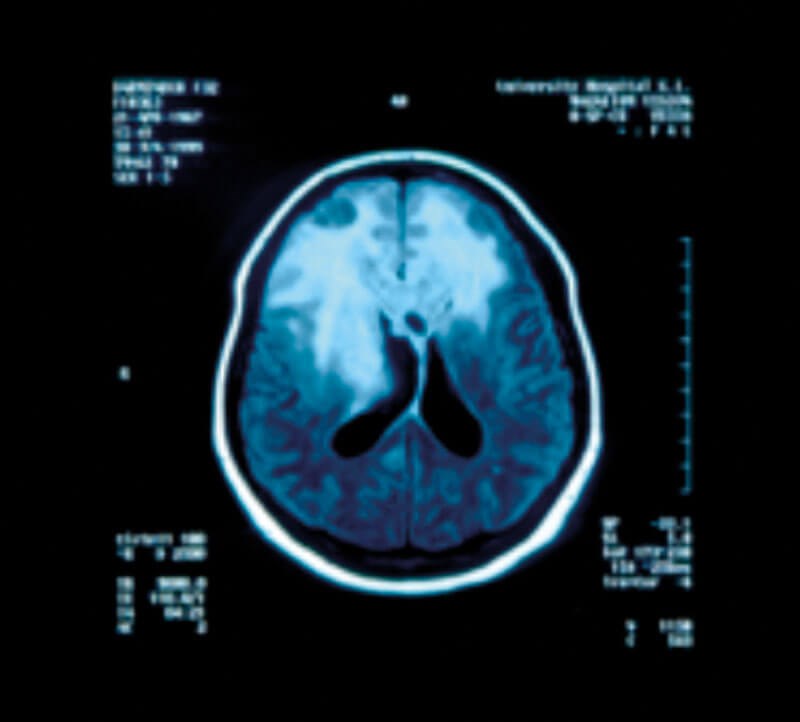 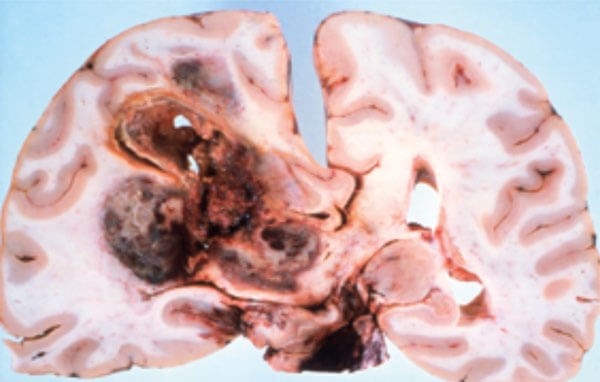 Figure 5: Pathology of an infiltrating glioblastoma with extensive haemorrhage.

Astrocytomas comprise up to 50% of primary brain tumours and can originate anywhere in the brain parenchyma, often presenting with seizures; the more benign varieties are commonest in the fourth decade of life but the GBM is usually seen in the fifth or sixth decade (Figures 4 and 5).

Oligodendrogliomas arising from oligodendrocytes are rarer gliomas usually presenting with seizures and are often located in the frontal lobes. They have a characteristic histopathology which is essential for diagnosis and chemotherapy is the primary method of treatment, with a survival time of three to five years.

These so called benign intracranial tumours arise from the Schwann cells of the myelin sheath of a cranial nerve and are commonest in the vestibular part of the eight nerve which is closely related to the seventh nerve. Such tumours can also occur but less commonly in the fifth or in one of the ocularmotor nerves [7]. 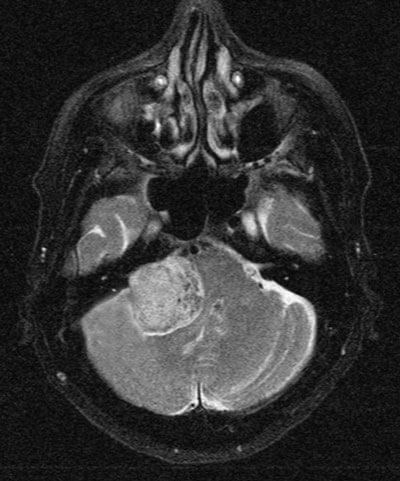 Vestibular schwannomas or acoustic neuromas (Figure 6) are more often seen in the eye clinic for management of postoperative complications than for diagnosis. They usually present to the ENT or neurology clinics because of hearing loss, tinnitus or balance problems. Because these tumours alter the CSF composition or block the fourth ventricle they can also produce papilloedema. Complete surgical removal is seldom achieved and a facial palsy or facial paralysis is a common post operation problem. In addition, because the seventh nerve carries the secreto-motor supply to the lacrimal gland through its greater superficial petrosal branch, a dry eye will ensue.

Thus the vital importance of performing a Schirmer’s test on all patients presenting with a facial palsy cannot be over emphasised, and failure to mention this in an examination viva is a common cause of failure to pass. If the fifth nerve is also involved as may sometimes occur with large acoustics or after operation there is an additional insensitive cornea to be dealt with.

Other brain tumours less commonly encountered in the neuro-ophthalmology clinic are pineal tumours and lymphomas, ependymomas arising in the ventricles and haemangioblastomas which are usually found in the posterior fossa.

Secondary brain tumours most frequently originate from the lung or breast and are often multiple.

Treatment of intracranial tumours is a matter for the neurosurgeon and his associates with the possibility of surgery, sometimes only to obtain the exact histology, radiotherapy, chemotherapy or combinations of these. With modern methods of treatment the prognosis even for high grade tumours has improved substantially.

For the ophthalmologist essential management is to decide how urgently treatment is required and to act accordingly. We are, however, more often involved in dealing with postoperative complications and not infrequently further visual loss and even blindness. Post craniotomy diplopia is common but usually recovers in four to six weeks unless an ocularmotor nerve is permanently damaged. In the meantime the diplopia has often to be dealt with in the eye clinic, for neurosurgical ward staff are in the authors experience seldom capable of even covering one eye, or occluding one lens in the patient’s spectacles and thus giving immediate relief of the double vision.

Declaration of competing interest: None declared.