As global diabetes figures continue to rise, the importance of reducing the burden of macrovascular and microvascular complications of diabetes has never been so great. By 2025 it is estimated that five million people in the UK will have diabetes [1]. It is known that non-modifiable and modifiable risk factors can influence the progression of eye disease. The non-modifiable factors include duration of diabetes, age and ethnicity [2]. The most common modifiable risk factors are listed in Table 1. 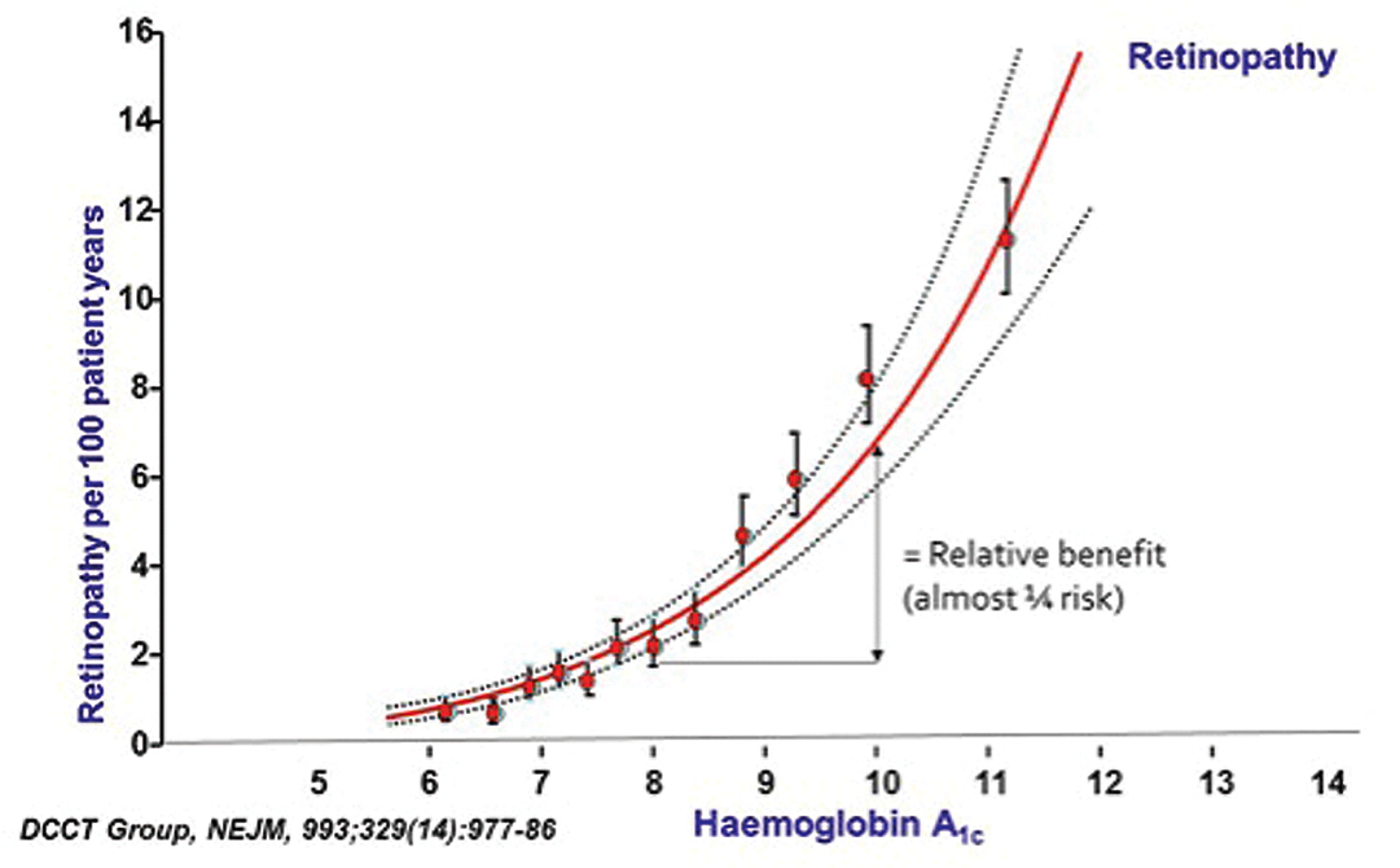 The Diabetes Control and Complications Trial (DCCT) [3] (type 1) and UK Prospective Diabetes Study (type 2) [4,5] both established a strong link between glycaemic control and progression of retinopathy. The DCCT showed that in type 1 diabetes, an HbA1c <7% resulted in a 76% reduction in developing retinopathy and a 54% slowing of progression in those with established retinopathy. The relationship between HbA1c and retinopathy risk can be shown graphically (see Figure 1). A 2% drop in HbA1c will quarter the risk of retinopathy, hence the importance of stressing improved control to our patients (see Table 2).

The Epidemiology of Diabetes Interventions and Complications (EDIC) Trial, a 10 year follow-on study from the DCCT, showed that that even after glucose control worsened again during the trial, the previously tightly controlled group continued to do better for 10 years including reduction in three step progression of retinopathy [6].

It is important to remember that there are some risks associated with tight glucose control. These include the risk of hypoglycaemia, worsening retinopathy and in the Action to Control Cardiovascular Risk in Diabetes (ACCORD) study, the trial was terminated early due to excess fatal myocardial infarction in the intensive group of those with type 2 diabetes (1.41% vs. 1.14%). According to the National Institute for Clinical Excellence (NICE) guidance, it is recommended that a personalised HbA1c target should be set, usually between 48-58mmol/mol (6.5-7.5%). Less strict targets should be set in patients with type 2 diabetes or those with established cardiovascular disease. In those with macular oedema, the use of glitazones should be avoided as these may exacerbate diabetic macular oedema (DME) [7].

Raised blood pressure is another risk factor known to be associated with retinopathy progression. The UKPDS demonstrated that tight blood pressure control (mean BP 144/82) showed a significant reduction (34%) in retinopathy progression of two steps in those assigned to tight blood pressure control over nine years [5]. There was also 47% reduced risk of a clinically significant deterioration in visual acuity (see Table 2). NICE recommends a target blood pressure of <140/80mmHg for most people with type 2 diabetes and <130/80mmHg for those at more risk with signs of target organ damage (including: ischaemic heart disease, cerebrovascular disease (stroke or transient ischaemic attack), diabetic nephropathy, left ventricular hypertrophy and of course diabetic retinopathy).

It is important to remember that multiple therapies may be required, as in the UK Prospective Diabetes Study (UKPDS) up to a third of patients required three antihypertensive medications. ACE inhibitors may also have additional benefits in reducing the risk of diabetes related kidney disease [5].

Although the lipid story is a little less conclusive in diabetes, there are some important studies worth knowing about.

There is some data suggesting a small benefit from statins, for example the CARDS trial, which included 2,838 patients over a median follow-up of 3.9 years, showed that atorvostatin 10mg daily resulted in a trend to reduction of laser therapy compared with placebo, but there was no influence on diabetic retinopathy progression [10].

Two further studies, the Fenofibrate Intervention and Event Lowering in Diabetes (FIELD) Study and ACCORD studies have shown a further benefit of lipid lowering and reduction of retinopathy risk in type 2 diabetes. In the FIELD study, a fenofibrate (200mg/day) reduced the requirements for laser therapy (both macula and pan-retinal photocoagulation [PRP] laser) and reduced retinopathy progression in those with pre-existing diabetic retinopathy (DR). This effect appeared to be independent of serum lipid levels. Similarly, the ACCORD study, showed a 40% reduction in progression of DR over four years in patients allocated to fenofibrate (160mg/day) in combination with a statin, compared to simvastatin alone. This occurred with an increase in high-density lipoprotein (HDL) cholesterol and a decrease in serum triglycerides [10]. Some have criticised these results in view of the fact that DR progression was not the primary end-point by design in either study and there were limited data available on retinopathy progression. Their side-effect profile may also limit their use which includes muscle pains, weakness, hepatotoxicity, gastrointestinal (GI) symptoms and skin rash.

“A 2% drop in HbA1c will quarter the risk of retinopathy.”

It is known that pregnancy can accelerate the course of diabetic retinopathy. This is likely to be linked to increased cardiac output, increased plasma volume, increased retinal blood flow and the onset of anaemia. Other factors may also include uncontrolled hypertension and poor glycaemic control prior to the pregnancy.

Studies including the DCCT and Diabetes in Early Pregnancy (DIEP) study showed that DR progression can vary between 8% and 70% and the severity of retinopathy at baseline significantly increases the risk of progression, especially in the second and third trimesters [11].

NICE guidance recommends increased frequency of surveillance in the preconception period and throughout pregnancy of women with long-standing poor glycaemic control and PDR [11]. It is also recommended to stop ACE inhibitors and statins pre-conception.

The English National Screening Program for Diabetic Retinopathy recommends digital imaging with mydriasis using tropicamide only, following their first prenatal clinic appointment and again at 28 weeks if the first assessment is normal. If retinal assessment has not been performed in the preceding 12 months, it should be offered as soon as possible after the first contact in pregnancy. If any diabetic retinopathy is present, an additional retinal assessment should be performed at 16-20 weeks.
(http://diabeticeye.screening.nhs.uk/f
aqs-screening#fileid11189)

Currently, treatment options are limited to laser photocoagulation, but there is no clear recommendation as to the best time to perform this. Currently, early PRP in cases of severe non-proliferative DR or proliferative DR that does not meet high-risk characteristics and early standard laser treatment of diabetic macular oedema is considered best practice. The role, if any, of intravitreal anti-VEGF agents such as ranibizumab or bevacizumab in pregnancy is still to be determined [11].

Even though regression can occur after delivery, continued follow-up for 12 months post-delivery is recommended when the rate of progression reverts to pre-pregnancy levels [11].

The global burden of type 2 diabetes treatments is growing and current treatments remain suboptimal. Treatment goals such as effective glucose control, reduced obesity and risk of cardiovascular disease, together with reduced risk of hypoglycaemia, are seldom achieved. The current treatment strategies for type 2 diabetes have focused on reducing insulin resistance and increasing insulin secretion and include biguanides (e.g metformin), sulphonylureas (e.g. Gliclazide), and insulin. All these treatments have side-effects. Metformin commonly causes gastrointestinal side-effects and a metallic taste and sulphonylureas and insulin cause weight gain and hypoglycaemia. A further group, the thiazolidinediones (also called glitazones) cause less hypoglycaemia but have been associated with weight gain, fluid retention and other safety concerns regarding potentiation of cardiac failure and macular oedema [12,7].

Glucagon-like peptide-1 (GLP-1) receptor agonists (also known as the Incretins) and dipeptidyl peptidase-4 (DPP-4) inhibitors (known as Gliptins) are two newer groups of anti-diabetic drugs that offer a novel way of reducing hyperglycaemia by targeting the incretin system [12,13]. The incretins are natural hormones that reduce post-prandial blood sugar levels. These act by stimulating the release of insulin from the pancreas after meals, even before the blood glucose starts to rise. They also inhibit the release of glucagon by the pancreas thus preventing the release of stored glucose into the bloodstream. The third effect of the incretins is to slow stomach emptying, thus increasing satiety, inhibiting appetite and reducing weight gain (see Table 3). The GLP-1 agonists (which mimic natural incretins) therefore have a large benefit over existing drugs, which usually cause weight gain, and this has led to increased usage (see Table 3). The disadvantage of the GLP-1 agonists is the need for sub-cutaneous administration.

The incretins are naturally degraded by the proteolytic enzyme dipeptidyl peptidase-4 (DPP-4). The DPP-4 inhibitors therefore prolong the action of the incretin hormones. The advantage of this group of drugs is that they can be taken orally, but they have less effect on weight loss and are therefore less desirable to reduce obesity [13].

Recently, there has been some concern about the risks of pancreatitis and pre-cancerous pancreatic duct metaplasia with both classes of drugs, stimulating a US Food & Drug Administration (FDA) investigation which may limit their increased usage.
(http://www.fda.gov/
drugs/drugsafety/ucm343187.htm)

With our increased understanding of risk factors for diabetic complications and the development of newer drug treatments with fewer side-effects, we hope to lessen the burden of diabetes in the future when we already have limited resources.