There are quite a few apps in both the iPhone and Android app stores designed to help patients remember to take their eye drops. The goal here was to select an app suitable to recommend to patients.

The app contains a section where patients can add their eye drops from a list and then set reminders. This approach unfortunately suffers from a significant problem that is difficult to ignore. The medication catalogue is relatively thin on the ground; certainly not matching what is available in the UK. No options exist for adding medications to the catalogue. The app does have many good features but this limitation rules it out from further consideration.

This app is more user friendly than ‘MyEyeDrops’ and focuses on just being an eye drop reminder tool. The layout is clear and the interface also shows a helpful image of the eye drops to use. Unfortunately, it also suffers from the same problem as the previous app. The authors of the app unfortunately did not reply to email enquiries, even after purchase. For a similar reason to the previous app, this one isn’t worth further consideration.

Thankfully this app takes a different approach. To avoid the issues of keeping a library of eye drops up-to-date this app prompts the user to manually type in a name for the drops. The app also clearly supports an indication of which eye a patient should apply the drop to. Like the other apps, a notification (both visual and audible) appears and prompts the user to apply their medication. Unfortunately, only one eye drop can be assigned to a three-hour window. It’s not possible to have brinzolamide at 8pm and then latanoprost at 9pm. You can set one drop to 8pm and another to 10pm. Another problem with the app is its inability to survive a phone restart or power off. When the phone reboots the notifications are not automatically re-established.

This app doesn’t have a drug catalogue, so users need to input their medication names manually. This allows any eye drops to be added, which for our purposes is critical. The app has a reasonably straightforward interface. As this is a tablet or pill focussed app it has no awareness that the treatment drops could be for one or both eyes. The only way to get around this is to enter two medications for each time point. For example, latanoprost right and latanoprost left, both scheduled for a particular time. If a drop were to be applied to both eyes, the user could just enter latanoprost singly though.

The notification interface is quite primitive and non-intuitive. No option exists to snooze the notification for a little later. Despite being well rated in the various stores I found the interface clunky and a little hard to grasp.

This app has a lot in common with the previous app and also isn’t linked to a drug catalogue. Once again, there is no recognition of laterality. The interface is also more fully featured than the Med Helper app and the notifications are also clearer. The features do add complexity though, and it may take time to become familiar with the layout. An option to ‘take now’ or ‘snooze’ also exists on the pop-up that appears when you are due to take a dose. This app is quite usable and has none of the problems of the previous apps considered.

Medisafe appears to be the most popular app in its class, claiming over two million users worldwide. The user interface is easily the best of all the previously discussed apps. The notifications are very friendly (Figure 1) and a summary of what medications are to be taken in a day is very clear. 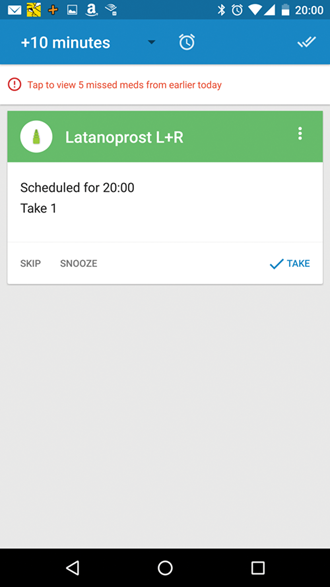 The app also effectively survives device restarts. Like all the generic medication apps, Medisafe does not provide a built in way to choose the left or right eye. Like the other apps in this class, this can be added to the medication name. A drug pick list does exist but the titles can be modified or new entries added as required. Although a user can’t choose left or right specifically, it is easily possible to give eye drops an eye drop bottle icon, making it easy to differentiate them from tablets (Figure 2). 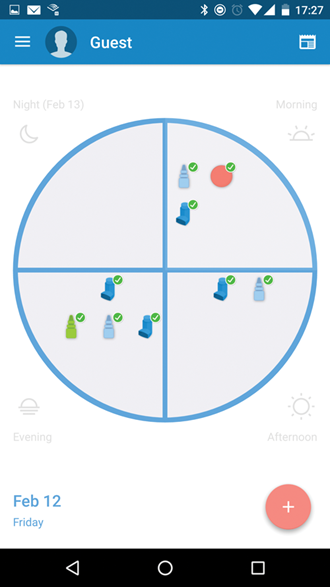 This app also includes cloud backup, making it easy to restore data on a new device. Rather unusually with this quality of app, there seem to be no fees, payments or ads. This does raise a question of how the developer stays in business. It may be that third party companies can pay Medisafe for anonymous adherence data from the app.

Overall, none of these apps are perfect, but Medisafe (www.medisafe.com) comes closest. The clean and easy to use interface stands out above all others. Whether many of our patients would want, or use, such an app is a different matter.