Like many of the topics covered in this column this subject is not ophthalmic specific. Hopefully it is of sufficient interest to be relevant to this audience.

Code4Health is a programme from NHS England that was announced in March 2015 by Tim Kelsey (The National Director for Patients and Information at NHS England). The purpose of the programme is to increase the digital literacy of clinicians. One part of the Code4Health programme is the ‘App in a day’ course. I recently had the opportunity to participate in one such event that was run in Manchester. 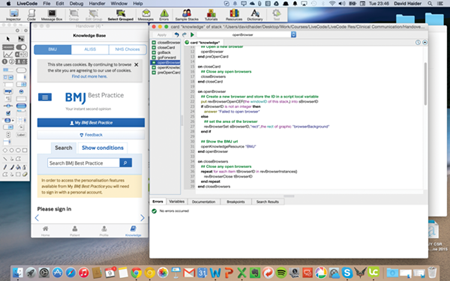 Like the name says, delegates get to build an app in a day. The event was a classroom style format (see image) with a teacher and number of other representatives from the company providing the training. Each delegate (we had about 15) brought a notebook computer with them and worked through the exercises over the course of the day. The exercises involved using a piece of software called LiveCode (see image) to construct an app piece by piece. Put simply, LiveCode makes apps in the same way PowerPoint makes presentations. With some skill and tuition clinicians can make presentations with PowerPoint and apps with LiveCode. I won’t pretend coding apps is as easy as making presentations, but you get the idea.

LiveCode is a UK company experienced in open source technology and teaching digital literacy. They have developed the LiveCode software to allow anyone to create apps. The term app in this context refers to programs that can be run on iPhones, iPads, Android devices and also Mac and PC. The LiveCode environment is capable of making apps for all platforms at the same time. The first example app that we created on the day was a fully functional calculator. At the end of the day it was capable of working on any of the above platforms. Although a calculator may sound of limited use, it did highlight that with relatively little experience clinicians could learn to write small apps to solve simple clinical problems. Even delegates who did not see themselves making apps in the future, did see the merit in understanding the process. Certainly, as NHS England is promoting clinicians to be increasingly in the driving seat of healthcare IT, a more technologically literate clinical body can only help. In addition to the calculator app we also worked through a medical handover app that the LiveCode staff created specifically for the event.

In addition to myself and some IT staff, the Manchester event had quite a wide range of clinicians including a GP, radiologist, microbiologist and physician, along with an A&E and psychiatric nurse.

To quote from the press release announcing the Code4Health programme: “Beyond the training, the aim of the programme is to bring together like-minded individuals and organisations of all sizes to form communities where they can share ideas, insight and tools on how to improve healthcare through the adoption of technology.” and “The Code4Health programme will not only encourage those who work in the NHS to engage with technology but also empower them to shape it into digital solutions which are meaningful to them and their work.”

It is our hope that some readers may find the description of the Code4Health programme sufficiently interesting to get involved in any events near them or even contact NHS England to organise events for themselves and colleagues. In our case NHS England paid for the event and our Trust paid for the venue for the day.

If you would like to get in touch with the Code4Health team at NHS England, here are some ways:

If you are interested in knowing more about LiveCode or downloading the free software visit livecode.com

Although the software is free to download and install, a variety of costs exist if users wish to place apps in the main mobile app stores (for Apple and Android). In that setting a paid version of Livecode is required and for Apple a developer licence. Many of these can potentially be avoided if apps are distributed locally rather than via the stores. There is also the possibility of getting Trusts or even NHS England in the future to fund the necessary licences to any clinicians interested.

The author has no proprietary interest in any of the products discussed.