Basic phone for Braille readers (or kids and the elderly)

We’ve previously covered the extensive features of smartphones that can help the sight impaired. It’s clear, however, that smartphones are not for everyone. One alternative is a custom made Braille mobile phone. The UK based company Ownfone (myownfone.com) will do just that. For £60 (plus annual contract cost prices from £50) a credit card sized phone can be created with two or four pre-programmed Braille buttons. Image 1 shows buttons in raised text, Braille and patterns. The units don’t have any functions other than making calls, but could be perfect for many blind or sight impaired people. The company also markets the units with the elderly or young children in mind where photos can also be used as the buttons. 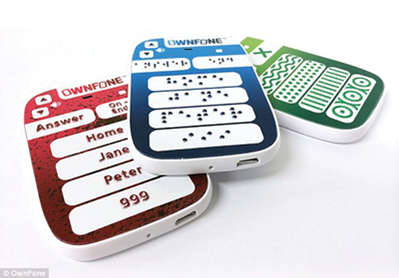 An article recently published in Nature (goo.gl/wKQHjP) demo­­nstrates a new type of intraocular lens that incorporates an intraocular pressure (IOP) ‘sensor’. The sensor is mechanical (actually a microfluidic sensor) and requires no electricity to run. This design provides two significant benefits. Firstly, the sensor is not affected by corneal factors, such as thickness or elasticity. Secondly, the IOP can be measured easily from the lens using a smartphone. This opens up the possibility of patients measuring their own pressure while at home. The IOL has a channel open to the aqueous. Increasing IOP compresses the gas at the closed end of the channel, pushing it down further. The IOP can then be read a little like a traditional thermometer. An alternative approach is taken by Implandata’s Pro-IOP implant (goo.gl/AqvN6f) which is a separate ring shape implant that is fitted along with a regular intraocular lens (IOL) at the time of cataract surgery. The implant can then provide similar benefits to the previously described lens but a wireless detector is used to receive the IOP data sent from the implant. The Pro-IOP is currently being trialled in primary open angle glaucoma (POAG) sufferers needing cataract surgery.

KNFB Reader for the blind

Rather than describing it, have a look at this excellent demo video of the KNFB reader app. It’s $100 and only available on iPhone/iPad at the moment (Android planned): goo.gl/RbLnfG.

Sometimes it can be very handy to be able to capture an image of what’s displayed on a computer screen. It may be to share with a friend or include in a presentation. Whatever the reason, here are ways and means to achieve screenshots of the major desktop and mobile platforms. If you forget in the future there is always www.take-a-screenshot.org

All versions of Windows have basic screenshot capabilities built-in. To activate it press the ‘Print Screen’ button on the keyboard. It’s a key that’s usually on the top right of the keyboard. More often than not it’s abbreviated to PrtScn to fit on a button. Pressing it will copy the contents of the screen to the clipboard so it can be pasted into another program, like PowerPoint or paint (if you want to save it). If all you want is the current windows use the ‘Alt’ key in addition to ‘PrtScn’. If that all sounds a little complex there are many free apps such as PrtScr, PicPick and Greenshot. The last two will automatically upload screenshots to online services if required.

The easiest way on a Mac is to use the keyboard combination ‘Command+shift+3’ or ‘Command+shift+4’. The former will create an image file on your desktop of your screen contents. The latter changes your mouse cursor to a cross allowing you to draw a rectangle over whatever you want to copy. The contents of the rectangle are again put in a file on the desktop.

Pressing the ‘Home’ button and the ‘Wake/Sleep’ buttons at the same time captures the screen into a photo.

Different manufacturers use different ways to achieve this. On Samsung phones press ‘Power’ and ‘Home’ keys simultaneously. A screenshot will be placed in your gallery. On other Android phones pressing ‘Volume Down’ and ‘Power’ should achieve the same thing.

What is using up your disk space?

Whether on Mac or PC, being able to identify why your disk space is running out can help you remove some files or programs and free up some capacity. On PC the free piece of software called WinDirStat (windirstat.info) can achieve this. A similar free app for Apple Macs is called Disk Inventory X (www.derlien.com). Both apps scan your drive and present the results in a graphical grid, with the files and folders taking up most space being the largest. Do be careful not to delete anything you don’t recognise if you’re not sure what you’re doing.

Although it’s been up and running since 2012 I only learnt about this site recently from a colleague. The service runs from MIT and allows users to map the complexities of visual neuron connectivity. It’s a bit like a 3D colouring book, where neuron paths traverse the brain. According to the Wikipedia page there are currently over 120,000 ‘players’ in over 150 countries. It’s quite time-consuming, but a nice ophthalmic example of crowd sourced processing.

The author has no proprietary interest in any of the products discussed.