In a continuing look at wearable technology, for those with sight impairment, for Aug/Sep we are looking at the recently released ARx. In previous issues we have covered the Envision Glasses and the OrCam MyEye. The ARx is a device with some overlap in functionality, but with some significant differences. The tagline for the ARx is “Augmenting Reality with meaningful audio cues, for the blind and low-vision”.

Both the Envision and OrCam are stand-alone devices. The ARx is reliant on a wired connection to an Android smartphone to function, as the device acts as a type of headset. Like similar devices, the ARx has a camera (two are present), microphone and control buttons (Image 1). This separate design provides an advantage when it comes to updates. The app and the smartphone can be updated, without need to update the headset. The app receives frequent updates, improving functionality. As the device itself just contains the cameras, microphone, and buttons it does not need any updates. Assuming a user buys a new smartphone periodically, the ARx will be able to stay current, as the processing capabilities and battery life will increase with those of the smartphone. 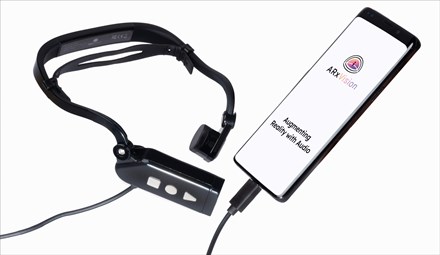 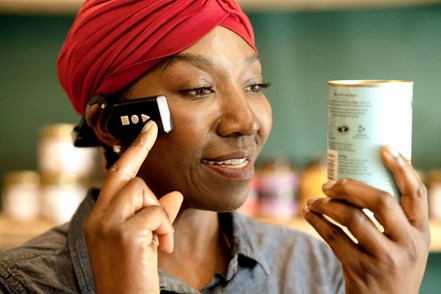 The speaker on the ARx relies on bone conduction and is situated on the skin in front of the ear, overlying the jawbone. This design allows the ears to remain open, thus allowing wearers to listen to their surroundings unencumbered. The nature of the sound conduction also means only the wearer can hear the sound, making the unit suitable for quiet public environments. Image 2 shows the device in use.

The ARx has six modes that can be chosen from by tapping the triangle button on the side of the unit (or also accessed from the app). The ARx also responds well to voice commands to change function.

When this mode is selected the ARx uses audio description to describe the current view. The performance of this function can be excellent. It correctly identified “a boy on a skateboard”, “a group of bottles and scissors on a counter” and “a toilet with the seat up”. The recognition is impressively fast, and the wearer does not even need to stop moving for recognition. The scene detection mode alone makes this unit impressive.

The ARx has two modes for reading text. The ‘Short text’ mode allows for rapid reading of text that comes into view. The ‘Document scan’ mode directs the wearer to position a document in view for scanning. The unit then captures the view and reads the text. The wearer does not need to keep looking at the document after the initial capture. The quality of the recognition in the Document scan mode is excellent and a little hit and miss in the more rapid mode.

The wearer can press one of the buttons on the side of the headset to move between a range of items, which are audibly announced. For example, couch, table, book, phone etc. The unit then continuously analyses the image in view for the selected item and announces a successful find with a sound. This mode worked well in testing.

When using this mode, a user can give a name to a face seen by the camera. The next time that face is seen the device will make the wearer aware. This mode worked well, in that it correctly identified taught faces, but having to specifically switch to ‘Face recognition’ for this task might frustrate some. I did find myself wishing there was a general recognition mode that would recognise faces, read text in view, and maybe periodically describe the scene. The face recognition was not instant, but certainly fast enough to be useful.

When this mode is selected the wearer can point the camera at a QR code. The ARx then announces the name of the linked website and enables the site to be easily opened on the browser of the connected smartphone. This worked perfectly.

The ARx is very competitively priced when compared with the OrCam (£3240 inc. VAT) and the Envision (£2640 inc. VAT). At the time of writing the ARx (device and app) can be purchased for £999 inc. VAT. This is currently a one-off price, with no ongoing subscription. Readers should bear in mind that although the ARx offers most of the same features of the other wearables, it does require a wired connection to an Android smartphone, containing no internal battery or computer itself.

The onboarding and first use of the headset and app was good. From then on, connecting the headset to the phone launches the ARx app. The headset is light and comfortable to wear (both with and without glasses). After continuous use, the camera module did become quite warm to the touch.

The only real limitation I encountered was the need for the smartphone app to be running, with the screen on, for the device to be usable. I reached out to the developers, and they allowed me to use a test version that addresses this. Once complete, users will be able to keep their phone in a pocket or bag (with the screen off) while using the device. The ARx was updated several times during my testing period, testament to the team’s commitment to make the product excel.

The actual battery life depends on the smartphone, with the manufacturers reporting four to five hours of continuous use. The coming improvements to allow the device to function with the phone screen off will likely extend this further.

Overall, the ARx compared very well with the Envision and OrCam, given the significant price difference. Navigation between modes was superior on the ARx, with three simple buttons that are easy to recognise and use.

There is no published clinical trial data involving the ARx at the time of writing (July 2022). There are some recorded videos of user feedback available to view here: www.youtube.com/watch?v=gD8hMhblLF4

The Chicago Lighthouse for the blind (a well-respected vision care organisation) and New York University (NYU) Langone have both been involved in using and testing the device.

The ARx is a very new device and improving rapidly. The makers are keen to add iPhone support and increase the features and capabilities of the platform. The anticipated functions include in-home navigation and gesture support among many others.

X  Not currently compatible with iPhones (Android only)