It has been 25 years since Huang et al. presented the first optical coherence tomography (OCT) images in Science [1]. With vast improvements in OCT technology over the years, it is now possible to acquire high-resolution cross-sectional images of the anterior and posterior segments of the eye within fractions of a second. OCT is sometimes referred to as an ‘optical biopsy’, and with the advent of ultrahigh resolution OCT technologies we are fast approaching axial resolutions comparable to histopathology.

Although initially slow to be adopted, OCT has now become an essential adjunct for the diagnosis, monitoring and treatment of eye disease. The number of OCT scans being acquired is on an exponential trajectory, partly owing to the emergence of intravitreal therapies for the treatment of retinal diseases – OCT has become the default modality for assessing efficacy of treatment. In addition to eye specialists ordering more OCT examinations, they are routinely imaging both eyes – micrometer resolution of OCT aids identification of patients at risk of developing eye disease by enabling subtle changes to be detected before clinically visible on the slit-lamp. OCT not only identifies these changes, but it also provides objective, reproducible and quantitative data, and therefore makes it a valuable tool for monitoring eye disease.

“Newer technologies aim to expand the depth range of OCT even further to achieve ‘whole eye’ imaging spanning from the eyelids to the posterior pole.”

Inevitably, with earlier identification of eye disease and the wider availability of therapies, the number of patients being monitored and treated in eye clinics continues to accelerate. This is a particular issue in the subspecialty of medical retina as intravitreal therapies are often delivered as frequently as every four weeks. This is not only a socioeconomic burden on healthcare systems, but also on patients and carers who have to regularly attend appointments.

OCT is safe, non-invasive, quick and easy to perform, and well tolerated by patients. It is feasible that in the future, every patient that attends the eye clinic has an OCT examination. However, OCT systems at present still have a few limitations.

Commercially available OCT devices have a limited depth range. Widely used spectral-domain OCT devices have a typical depth range in the order of a few millimetres, ideal for imaging the retina, but less effective for imaging other structures of the eye. Enhanced-depth imaging protocols overcome this limitation to some extent by moving the zero-delay line posteriorly to penetrate deeper into the choroid, but this is at the expense of lower resolution of the inner retinal layers [2]. The development of swept-source OCT (SS-OCT) in recent years has greatly extended the depth range. SS-OCT uses a ‘tunable’ laser centred on a wavelength of approximately 1060nm.

This longer wavelength is ideal for penetrating through tissues that highly scatter light such as cataract and the retinal pigment epithelium. Thus, SS-OCT enables the visualisation of deeper structures such as the choroid, sclera and even orbital fat. The speed of image acquisition is also greatly enhanced in SS-OCT devices to approximately 100,000 A-scans per second, allowing greater sampling and therefore higher resolution images to be captured, as well as minimising eye motion artifacts.

Most OCT systems are dedicated to retinal imaging or anterior segment imaging. Some commercial retinal scanners are capable of switching between anterior and posterior imaging modes with additional optical attachments; however, anterior segment imaging performance is typically suboptimal. Newer technologies aim to expand the depth range of OCT even further to achieve ‘whole eye’ imaging spanning from the eyelids to the posterior pole. SS-OCT prototypes incorporating vertical cavity surface emitting lasers (VCSEL) as a light source have an even greater depth range of up to 40-60mm, greater than the axial length of the eye. Therefore, with VCSEL it is possible to image both anterior and posterior segments concurrently and without the need for additional attachments [3].

Additionally, VCSEL will enable imaging of the vitreous cavity; preliminary studies have shown that OCT-derived measurements of vitreous signal intensity may be useful as an outcome measure for patients with uveitis [4]. VCSEL has the potential to acquire images at ultrahigh speeds of up to 580,000 A-scans per second with an axial resolution of 9μm. These properties are a significant step towards using one instrument to gain a holistic, high-resolution and three-dimensional view of the entire eye.

Another limitation of OCT is their tabletop configuration, consisting of large galvanometers, thus constraining portability. Patients are required to sit upright and stabilise their head on a chinrest whilst maintaining steady fixation. Thus, these devices are only suitable for ambulatory and cooperative patients. There is a niche for constructing a portable, handheld, OCT device that could be used for paediatric populations, imaging patients in different positions, intraoperatively to guide surgery, and for ‘point of care’ diagnostics. There are currently two commercial handheld SD-OCT systems available that address this issue. The Envisu OCT constructed by Bioptigen consists of a 1.5kg imaging probe connected to a console by a 1.3m flexible cable. The iVue system by Optovue Inc. consists of a stand-mounted unit with a 2.2kg removable scanner. Both of these systems are associated with a steep learning curve for operation, are subject to motion artifacts, and are still considerably heavy for a handheld system.

Several SS-OCT research prototypes have been designed that incorporate miniaturised components known as microelectromechanical systems (MEMS). MEMS enables technology to be constructed at micrometer scale, and is widely used in numerous consumer products such as mobile phones, video game controllers, and accelerometers and gyroscopes in drones. In OCT systems, MEMS scanning mirrors can be used instead of bulky galvanometers to enable a lightweight compact design that can be integrated into probes or handheld devices, whilst simultaneously reducing the cost [5-7]. MEMS-VCSELs are also available, combining the advantage of portability with extended depth range [8]. This is likely to have important applications in the form of endoscopic OCT for use in specialties such as cardiology, oncology and gastroenterology, where OCT is becoming more prevalent to image subsurface morphologies.

OCT may soon be shrunk even further. Recent advances in silicon photonics have demonstrated the feasibility of integrating optical and electrical circuits onto a chip, which is likely to have significant impact in datacom applications. OCTCHIP, a European project led by Wolfgang Drexler from the Medical University of Vienna aims to use this technology to engineer a cost-effective chip-sized OCT system that can be incorporated into portable devices. Commencing at the start of 2016, OCTCHIP endeavours to radically transform OCT towards widespread adoption in point-of-care diagnostics for the early diagnosis of retinal pathologies.

It is perhaps time to shift into an era where OCT can perform eye examinations beyond high resolution structural imaging. Envision Diagnostics Inc., a startup company founded by Alexander Walsh MD, and based in California, aims to commercially develop the ‘binocular OCT’ – a system that can also perform functional testing in addition to imaging [9].

Their concept drawing (Figure 1) illustrates a handheld SS-OCT device that the patient can align to the optical axes of their own eyes, removing the need for additional personnel to acquire the images. By incorporating swept-source lasers, the binocular OCT is able to image the whole of the anterior segment, a significant proportion of the posterior pole (up to 14mm x 14mm in their current prototype), as well as the vitreous, allowing the advent of so-called ‘OCT biomicroscopy’.

“The internal screens within binocular OCT devices can function like Apps on a smartphone, presenting content to the user.”

Paired with smart technology, binocular OCT systems can also offer advanced technical and computing capabilities relative to conventional OCT platforms, allowing the user to interact and communicate with the device. The internal screens within binocular OCT devices can function like Apps on a smartphone, presenting content to the user. This could be a cartoon in a paediatric setting to distract a child while invisible infrared light rapidly acquires OCT images of the eyes. Their prototype of the device, for example, is able to automatically measure visual acuity – the patient sees letters of different sizes when looking into the machine, and verbally responds to what they see. Voice recognition is used to compare their responses to the correct answers, and then the information is relayed to a computer. 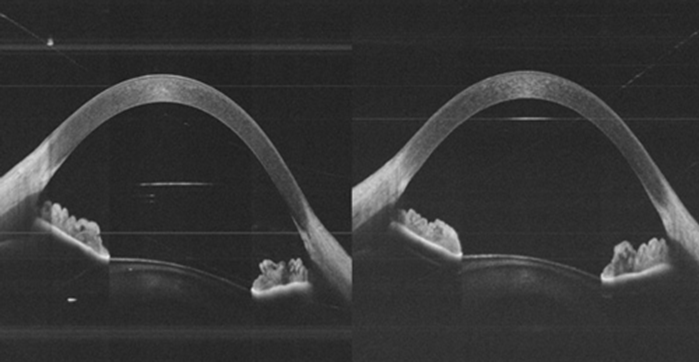 Binocular OCT systems also allow real-time high-speed image capture from both eyes at the same time. This ‘simultaneous’ ocular imaging expands the range of functional testing possible. Pupillometry, for example, can offer valuable information regarding the presence of eye disease. The conventional method of testing pupils involves shining a pen torch into the eyes, and relies upon a trained examiner visualising pupil responses. In this way, pupillary defects are often subtle and easily missed, and many potential sources of error may confound the results, including anisocoria and off-axis pupil illumination. Using the binocular OCT, a controlled flash of light is presented to the user while the OCT dynamically captures images through the iris planes (Figure 2). By measuring the width of the pupil in rapidly acquired pairs of B-scans, pupil parameters such as maximum and minimum pupil diameter, velocity and amplitude can be quantitatively measured, and subtle pupillary defects can be detected.

Another example is perimetry. Smart binocular OCT systems have the potential to perform static, kinetic or confrontation perimetry. The internal screens can display stimuli of various sizes, colours and luminance, and the patient’s responses can be registered by voice recognition or external buttons. Uniquely, real-time retinal OCT enables foveal tracking to monitor fixation.

The prototype device, capable of performing several tests at present, is currently in the process of testing and validation at Moorfields Eye Hospital, London. The first clinical study of this device is currently underway, the EASE study (ClinicalTrials.gov NCT02822612). It is possible that in the future, this single instrument could perform a range of additional diagnostic and functional testing, such as refraction, extraocular movements, stereopsis and colour vision, to name a few examples. The most revolutionary aspect of the device is that it has the potential to be self-operated. Imagine a future of remote eyecare, where patients can perform their own eye examinations in the supermarket, GP surgeries, or even at home.

Smart binocular OCT systems will enable clinicians to improve the quality of patient care through the provision of objective, reproducible, quantitative analyses for every aspect of the eye examination. The eye exam will be streamlined, and the capture of robust standardised of data will inevitably improve the monitoring of eye disease. It is unlikely that binocular OCT will be a panacea; however, if OCT can replace some aspects of the eye examination, workflows and waiting times will be improved, and clinicians will be able to devote more time to patient care.

By exploiting advances in miniaturised OCT systems, increased depth range light sources and smart technology, the binocular OCT is one approach that may be able to reduce the cost, increase the quality and improve efficiencies in the provision of eyecare. Undoubtedly, OCT will continue to transform ophthalmology, and portable, low cost systems are likely to have their place in the OCT revolution.

Dr Keane has received speaker fees for Bayer, Novartis, Allergan, Topcon, Heidelberg, and Haag-Streit. He has served on advisory boards for Novartis. He works as a consultant for Google DeepMind. The author does not have any financial interest (including stocks and shares) in the companies mentioned in this article. 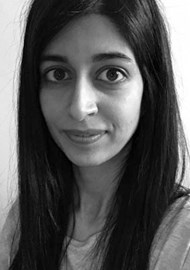