Diabetic retinopathy is a major cause of blindness in the working-age population. Due to the worsening global epidemic of diabetes, the incidence of morbidity caused by the disease is set to increase [1]. The prevalence of diabetes in the UK in 2013 was 6%. This translates into 3.2 million people with a diagnosis of diabetes, compared with 1.4 million in 1996 [2].

There are multiple modifiable risk factors for developing diabetic retinopathy (DR); taking an integrated approach to managing those with diabetes is essential. Modifiable risk factors such as glycaemic control and hypertension must be considered and minimised to prevent development and progression of DR.

Sight-threatening DR can be identified and treated in its early stages thus reducing associated morbidity [1]. It is essential that high-risk patients are correctly identified and receive appropriate treatment to avoid progression of disease.

Hyperglycaemia, hypertension and hyperlipidemia are all thought to contribute towards vascular disruption in the retina leading to DR. Damage to endothelial cells which maintain the blood retinal barrier leads to increased vascular permeability in the retina. Injury to pericytes and thickening of the capillary basement membrane results in dysregulation of the blood flow within the retina and development of microaneurysms. As capillaries are occluded retinal ischaemia occurs resulting in the release of angiogenic factors such as vascular endothelial growth factor (VEGF), which stimulates endothelial cell proliferation and disrupts endothelial tight junctions increasing vaso-permeability. The subsequent neovascularisation on the surface of the retina can then lead to vitreous haemorrhage and tractional retinal detachment [3].

There are multiple classification systems of DR. The Early Treatment Diabetic Retinopathy Study (ETDRS) produced a full disease classification system based on characteristics of DR seen on fundus photographs [4]. International severity scales for both DR and macular oedema have been developed based on EDTRS findings [5] (Table 1). 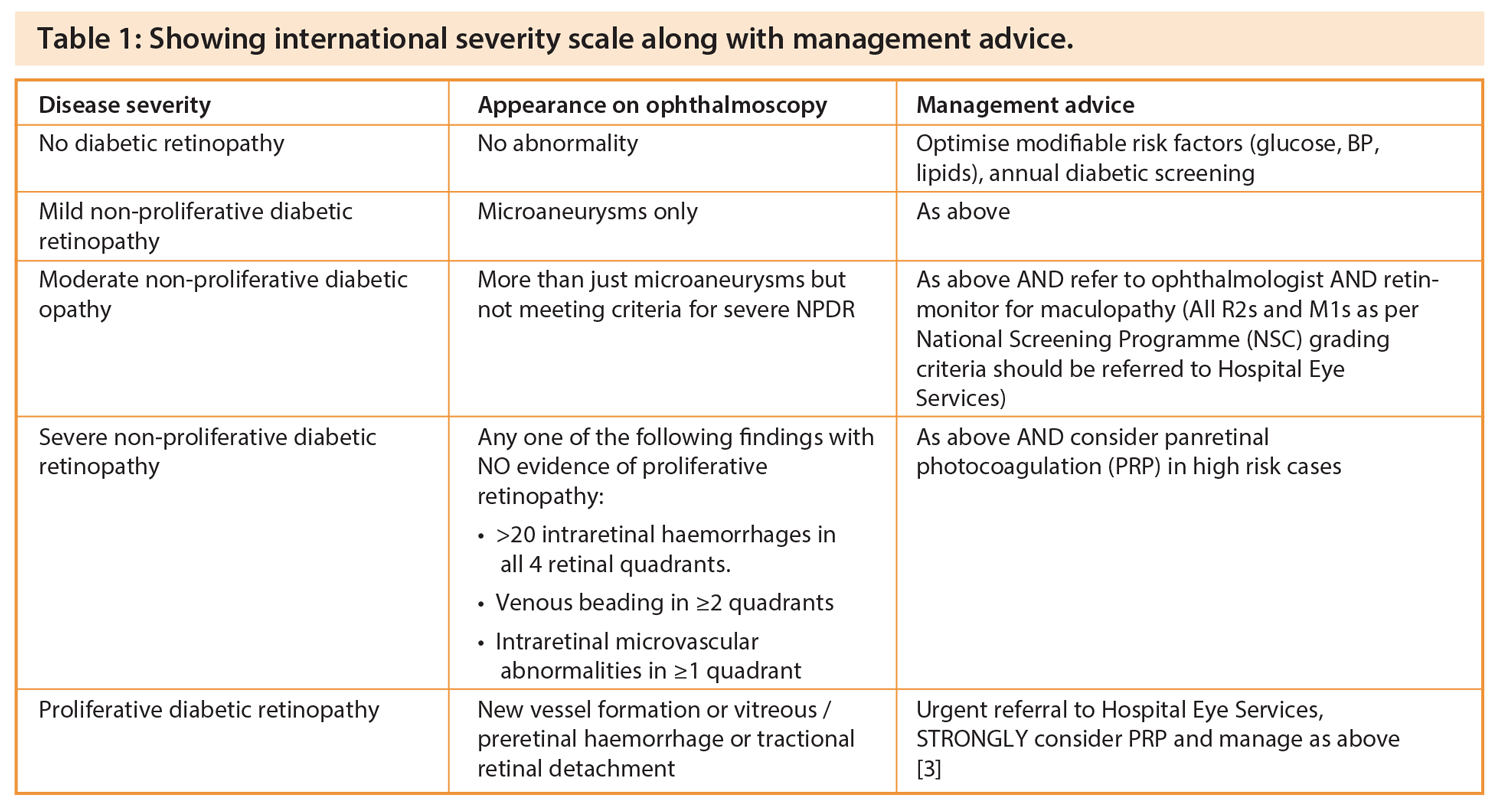 The Diabetic Retinopathy Study (DRS) was a randomised clinical trial that began in 1971 involving over 1700 patients. It looked at the benefit of panretinal photocoagulation (PRP) in the treatment of proliferative diabetic retinopathy (PDR) compared to follow-up without treatment. DRS showed that treatment with PRP reduced the risk of severe visual loss (<5/200) by more than 50% compared with no treatment [6]. PRP is still the mainstay of the treatment for PDR.

The EDTRS compared the benefit of early photocoagulation in eyes with non-proliferative DR or PDR without high-risk features compared to deferring until high risk PDR had been reached. The five-year risk of severe visual loss or vitrectomy in those treated before the development of high-risk PDR was 2-6% compared to 4-10% in those for whom treatment was deferred until high risk characteristics noted. Although this showed a benefit to early treatment, both groups retained a good final visual outcome. PRP was associated with side-effects such as a reduced visual field due to retinal ablation. It was suggested that PRP should be delayed until high risk PDR is approached [7]. 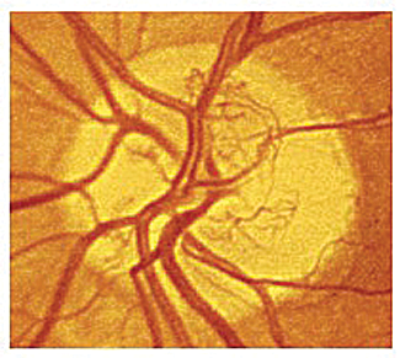 The following characteristics of PDR have been identified by the ETDRS as increasing the risk of severe visual loss meaning that PRP treatment should not be delayed in the presence of [7]:

When to start laser treatment

DRS and EDTRS findings lead to the recommendation that severe preproliferative DR be monitored four to six monthly and treated with PRP as it approaches the high-risk stage. Holding off laser treatment until the high risk stage balances the risk of blindness caused by PDR with the risks of PRP using argon lasers, particularly the obliteration of peripheral vision. This, however, relies on the regular attendance of patients. Advances in laser technology have reduced these risks. Using shorter pulse durations during PRP results in reduced pain, scarring, increased stability of the laser burn (reducing enlargement over time) and less damage to the outer retina resulting in a reduced impact on the peripheral visual field [8].

The development of multispot lasers such as the pattern scan laser (PASCAL) means that PRP can safely be commenced at an earlier point of DR with reduced side-effects. These lasers use shorter pulse duration (20-30ms) and allow multiple burns to be administered in one exposure and in a shorter time that is more comfortable for the patient [9]. Interestingly, despite increased usage, multispot lasers have been shown to cause increased recurrence of neovascularisation within six months of treatment despite equivalent laser spots being delivered.

When using standard settings recommended by EDTRS, PASCAL lasers may be less effective at preventing progression of disease, meaning that current treatment parameters most likely need to be adjusted [10]. EDTRS guidelines recommends that the area of treated retina should cover a minimum area of 236mm2 (range 157-314mm2) [11]. Using traditional argon laser burns of 500 µm this equates to approximately 1200 burns. When using multispot lasers, only a spot size of 400 µm at the retina is achievable meaning that approximately 1900 burns are required to treat the same area of retina as recommended by EDTRS guidelines. A spot size of 400 µm at the retina can be achieved using a Superquad lens with a laser spot size setting of 200 µm. The magnification factors of lenses used in PRP can be seen in Table 2.

Current recommendations from the Royal College of Ophthalmologists provides advice based on EDTRS guidelines regarding when to commence PRP in DR. PRP treatment is not recommended for patients with mild-moderate non-proliferative DR, these patients should be monitored annually using retinal photography. This can be carried out in the community (within the National Diabetic Screening Programme in the UK). Those with severe non-proliferative DR should have four to six monthly expert examinations looking for evidence of retinal neovascularisation or retinal ischaemia. Fundus photographs and fundus fluorescein angiography (FFA) are useful adjuncts to clinical examination. PRP should be considered as DR approaches the proliferative stage [8].

“It is important to remember that diabetic retinopathy is a posterior pole disease and proliferation occurs at the border of perfused and non-perfused tissue rather than the far peripheral retina.”

PDR should be treated with PRP. If high risk PDR is noted, PRP should be commenced that day or at least within two weeks. Obtaining baseline FFA is useful but should not delay treatment.

PRP should be considered earlier in the severe pre-proliferative stage in the following situations [8]:

How to carry out PRP

PRP can be performed at a slit-lamp mounted laser under local anaesthetic with use of oxybuprocaine 0.3% or tetracaine 1% drops and the use of an appropriate lens such as a SuperQuad (see table for magnification factors).

Once the decision has been made to start PRP, laser sessions should be commenced within two weeks and may be performed over two to three sessions to be completed within four to six weeks [8]. This fractionation of treatment can reduce the risk of maculopathy worsening [12], but if clinically significant macular oedema is present, it is advised to treat this at the same time as starting the PRP.

When treating extensive areas of retina, precautions must be taken to avoid increasing traction on the macula or retina, especially if there are persistant vessels at the disc. Often vitrectomy may be more beneficial in these cases.

Destruction of the peripheral field should be minimised, therefore, PRP should be stopped when signs of regression of the new vessels are seen and there is stability of disease. Blunting of new vessel tips will be seen indicating regression of neovascularisarion. Areas of stable neovascularisation should be regularly monitored for signs of new vessel growth and haemorrhage, although haemorrhage can often be a sign of traction as opposed to persistant / active new vessels, where referral for vitrectomy may be more appropriate. It is also helpful to look at the remaining retina and if features such as multiple retinal haemorrhages, venous beading or intraretinal microvascular abnormality (IRMA) (4-2-1 rule in severe non proliferative DR) are present, this points towards active retinopathy and the need for further laser treatment [8].

When to refer for vitrectomy

The Diabetic Retinopathy Vitrectomy Study (DRVS) performed in the 1980s showed that early vitrectomy (within one month) following severe vitreous haemorrhage in type 1 diabetics resulted in improved visual outcome at two years. A statistically significant improvement was not seen in type 2 diabetics [13]. Since these findings there has been much development of the vitrectomy procedure and equipment leading to improved outcomes and fewer complications (especially the risk of visual loss post procedure) meaning early vitrectomy may be more beneficial than previously thought.

Patients should be referred for consideration of vitrectomy in the following situations:

In those with vitreous haemorrhage who are awaiting vitrectomy or spontaneous clearing of the haemorrhage weekly ultrasound examinations to detect retinal detachment should be performed, especially if the patient has had no prior photocoagulation [8].

Anti-VEGF treatment is now used extensively in the treatment of diabetic macular oedema (DMO) following work undertaken by the diabetic retinopathy clinical research network (DRCRnet) and several other studies including the RESTORE study. These have shown improved visual outcomes compared to the use of laser alone and this benefit persisted at one and two year follow-up [14,15]. Additional review has also indicated reduced progression of retinopathy but more research is required on this.

The use of anti-VEGF pre vitrectomy in PDR has been seen to improve surgical outcomes. A systematic review of six randomised controlled trials and one comparative study has shown a statistically significant reduction in rates of intraoperative bleeding, recurrent vitreous haemorrhage and time taken for reabsorption of haemorrhage in those treated preoperatively with intravitreal bevacizumab compared to those receiving vitrectomy alone [16]. Caution must be exercised when using anti-VEGF treatment preoperatively as given alone in PDR, without subsequent vitrectomy, it can have adverse effects inducing tractional retinal detachment as rapid contraction of fibrovascular tissue occurs.

The rising diabetes epidemic is one of the major challenges facing modern medicine. Recognition of retinal changes caused by the disease is crucial to both eye and systemic health. Retinal changes may be the first sign of end organ damage. A good understanding of the management of DR as well as earlier detection through screening with continued development of treatment options are essential if visual deterioration is to be avoided in this large patient population. 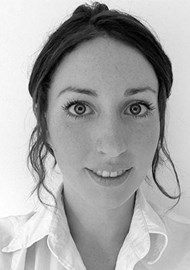