An exploration of Professor Harminder Dua’s recent work using a technique called amnion-assisted conjunctival epithelial redirection (ACER) to aid the success of conjunctival-limbal grafting procedures. ACER provides a refined way to use amniotic membrane (amnion), such as Omnigen® (NuVision® Biotherapies, www.nu-vision.co.uk), as a layer to prevent the admixture of undesirable conjunctival epithelial cells with important limbal explant-derived corneal epithelial cells on the cornea, thus preventing an outright failure of limbal transplant procedures. In this article, ACER is described and discussed in the context of other in vivo and ex vivo expansion options for the treatment of total limbal stem cell deficiency (LSCD).

LSCD can be characterised by the conjunctivalisation of the cornea [1], which may occur following the destruction of the limbus by acute and chronic conditions, such as chemical burns or toxic epidermal necrolysis. Healthy regeneration of the corneal surface involves the division, migration and maturation of stem cells that are located within the limbus.

Sequential sector conjunctival epitheliectomy (SSCE) may be used to treat partial LSCD and restore the ocular surface. SSCE involves the mechanical brushing or scraping off of the migrating conjunctival epithelial sheet in the affected area, under topical anaesthesia [3]. SSCE must be repeated almost daily and continued for as long as necessary until the cornea is re-epithelialised by corneal epithelial cells derived from sectors of surviving normal limbus. 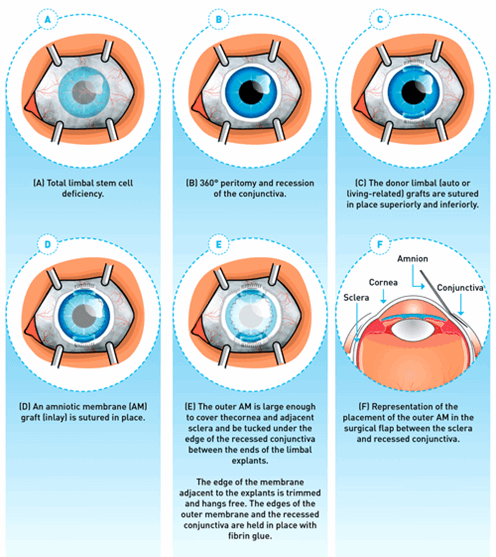 In eyes with total LSCD, limbal stem cell transplantation (LSCT) is the main therapeutic option. Keratoplasty without LSCT in the background of LSCD is at a high risk of failure, and is therefore contraindicated [2]. Patients diagnosed with total LSCD can be treated using either ‘in vivo or ex vivo stem cell expansion’ strategies. For unilateral LSCD, conjunctival-limbal autograft (CLAU) provides an in vivo expansion source of stem cells as well as the important limbal niche. A staged surgical process is usually followed to complete CLAU and similar procedures. First, the cornea of an eye with LSCD has its fibrovascular pannus dissected and removed following a 360o peritomy (Figure 1, A – B). Then, a donor (cadaver or living relative) or autologous (from the unaffected eye) conjunctival-limbal graft is harvested and grafted at the 12 and 6 o’clock or 3 and 9 o’clock positions of the affected eye (Figure 1, C) by suturing to the recessed recipient conjunctiva peripherally and the recipient limbus centrally (Figure 1, C). Finally, where the corneal surface is irregular following removal of the fibrovascular pannus, an optional amnion graft can be sutured as a substrate-transplant on the recipient cornea (Figure 1, D).

Simple limbal epithelial transplantation (SLET) is another ‘in vivo expansion’ technique in which a similar peritomy and removal of the fibrovascular pannus is carried out to prepare the recipient bed. The difference is that a small strip of limbal tissue is surgically harvested from the healthy fellow eye, dissected into small explants which are then seeded and affixed with fibrin glue on to a sheet of amnion grafted on to the recipient bed [4].

A limitation faced by these techniques is the high risk of conjunctival epithelial cells infiltrating into limbal explant derived corneal epithelial cell during the regrowth of the epithelial layer. Such a contaminated admixture of cells may cause the procedure to fail and leave the patient in prolonged pain or discomfort from the surgery, leading to a poor visual outcome. This can be addressed by combining the SLET procedure with SSCE, wherein the undesired conjunctival cells growing from the peritomised recessed conjunctiva are repeatedly scraped or brushed off until the transplanted limbal explant derived corneal epithelial cells have covered the cornea. SSCE can cause bleeding from surface vessels; can be painful to the patient; requires repeated monitoring; involves frequent patient visits to hospital and occasionally for the patient to stay in hospital. A potential alternative that reduces the need for SSCE is cultured limbal epithelial transplantation (CLET), which involves ‘ex vivo expansion’ of stem cells from limbal biopsies. This generates a healthy ‘ready to go’ corneal epithelial sheet which is transplanted on to the patients’ injured eye.

For the treatment of bilateral LSCD, similar in vivo and ex vivo expansion techniques can be considered using allogeneic-tissue, but with the caveats associated with allo-tissues such as risk of rejection and need for systemic immunosuppression [5].

ACER described by Dua et al. 2017 [1] builds on existing knowledge of amnion use in LSCT. The use of amnion ‘patching’ in LSCT procedures is not new and has been used previously to simply protect the corneal surface and limbal graft [6-8]. However, ACER involves a subtle but significant refinement in the way the amnion patch is transplanted, undermining the conjunctival edge, to uniquely act as a barrier and prevent conjunctival cell contamination of limbal explant-derived corneal epithelial cells, allowing for better surgical outcomes.

By utilising an amnion patch as a barrier, the advancing conjunctival epithelial cells are redirected away from, and over, the corneal surface so that it can be covered by expanding epithelial cells, derived from the limbal transplants. ACER in Dua’s paper employs the basic surgical principles of the CLAU, with several distinct steps; i) conjunctival peritomy with a 3mm recession of the conjunctiva from the limbus; ii) conjunctival-limbal explants include an additional 0.5-0.75 mm of peripheral donor cornea, creating a conjunctival-keratolimbal graft (inclusion of peripheral cornea allows for rapid cell out growth from the explant); and, iii) the outer amnion patch is then applied stromal side down over the cornea with a 5mm frill that is tucked under the recessed peritomised conjunctival edge, nasally and temporally between either end of the superior and inferior limbal explants.

During 2016, Professor Dua’s group carried out a retrospective study on autologous ‘in vivo expansion’ involving 26 patients all diagnosed with total LSCD as a result of chronic ocular damage [1]. The analysis compared CLAU plus SSCE (standard medical care, 15 patients), against CLAU modified with ACER (11 patients). All patients were treated with standard medical eye drops following surgery and were followed up an average of 12 months later.

In the SSCE control group, all patients were assessed daily, with SSCE performed every two days (up to six procedures), until the cornea had fully re-epithelised (10-14 days), and then weekly for the first month, followed by two monthly visits for six months. Whilst all corneas re-epithelised, patients required up to 21 appointments, and the SSCE caused pain or discomfort, and subconjunctival haemorrhage in 80% and 70% of patients, respectively. All ACER-treated corneas successfully re-epithelised. ACER effectively redirected the conjunctival epithelium in nine eyes, allowing the corneal surface to completely reepithelialise without any undesirable conjunctival/corneal admixture. In the other two patients, the ACER-membrane fell off prematurely post-surgery, thus, SSCE had to be performed. Prof Dua states that a refinement of the ACER procedure [1] with Omnigen use and tucking a wider margin of amnion under the recessed conjunctiva, prevented pre-mature amnion loss. ACER-treated patients also suffered less pain and discomfort and required as little as nine appointments (60% reduction) in the same time period as the SSCE treated patients.

Traditional CLAU treatment of LSCD is reported to improve vision in up to 94% of patients [2], but traditionally requires large limbal grafts. A major advantage of refining CLAU with ACER is the reduction of limbal graft tissue required. Furthermore, Dua states ongoing success rates reach close to 100% (personal communication, Professor Harminder Dua, NUH Trust, UK) with Omnigen use, which when compared to the success rate of auto-SLET (requiring one to two clock hours) and auto-CLET, at 83.9% [9], and 76% [10,11], respectively, and reviewed by Fernandez-Buenaga et al. [5], suggests CLAU refined with ACER holds great promise at improving LSCD treatment.

ACER is not, however, restricted to use with the conjunctival-limbal tissue graft procedures as described by Dua [1]. An amnion overlay has successfully been used to protect other LSCT procedures [6-8]. By adopting the subtle but important surgical procedure modification to create ACER, increased clinical success could be seen in SLET and CLET procedures.

The study by Dua demonstrates that implementing ACER with LSCT can effectively prevent conjunctival epithelial contamination of LSCD corneas treated by LSCT. It eliminates the need for painful and resource consuming SSCE [1]. Furthermore, this could potentially significantly enhance the clinical success of all other in vivo expansion techniques.

ACER enhanced CLAU and SLET are single-stage, extremely affordable, ‘in vivo expansion procedures’ that negate the significant cost and hurdles related to ex vivo cultured epithelial sheets; CLET requires specialised, costly, and highly-skilled clinical laboratories, as well as the associated complex regulatory hurdles. In vivo expansion techniques can be performed in almost any ophthalmology surgical department with relatively minimal additional training, and more importantly can be considered in any patient with LSCD, without regulatory restrictions.

Auto-CLET can only be considered where CLAU has already failed [11], and is also an extremely costly multi-stage and clinically challenging procedure. The proposed subtle and inexpensive surgical change with ACER could improve CLAU and SLET success, and potentially obviate the need for CLET procedures. This would deliver significant cost saving to the NHS, as well as improving patient care. Recent technological advances in amnion, such as Omnigen (www.nu-vision.co.uk) which is readily available off the shelf, easily manipulated in surgery, with preserved biochemistry and superior transparency compared to frozen products, supports the development of the ACER technique to a wider group of clinicians who wish to successfully treat greater numbers of patients. 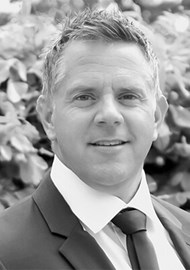