Vasoproliferative tumours of the retina (VPTR) are a vascular mass with an associated exudative retinopathy alongside the presence of minimally dilated feeder vessels. This is a rare ocular presentation occurring predominantly in a demographic of systemically well patients and can occur in isolation or secondary to pre-existing ocular pathology. In most reported cases, the tumours are of unknown aetiology.

These can occur in unilateral isolation or bilaterally, most commonly being located in the peripheral inferior temporal quadrant of the retina [1]. There are numerous ocular associations including retinal detachment, epiretinal membrane formation, vitreous haemorrhage and macular oedema [2]. The management of VPTR is largely dependent on whether it is a primary or secondary tumour, with treatment modalities including transconjunctival cryotherapy, photodynamic therapy and, most recently, immunomodulatory therapy with biologics.

A 47-year-old woman was referred to the emergency ophthalmology service from her GP, with a two-week history of worsening flashing lights / floaters, and increased light sensitivity. There was no ocular pain reported. She was generally fit and well, with no past medical history, no previous ophthalmic history, and no relevant family history. On examination, her visual acuity was 6/5 OD, and 6/6 OS. Her intraocular pressure was 14mmHg in both eyes. On fundal exam, a superotemporal lesion was identified and fluorescent angiography was deemed necessary to better determine its aetiology. This was suggestive of a vascularised, exudative lesion in the right temporal peripheral retina, with appearances characteristic of a vasoproliferative retinal tumour. She was subsequently referred to a tertiary ophthalmic cancer centre for further investigation. We are awaiting an outcome from the multidisciplinary team (MDT) with regards to her further management. 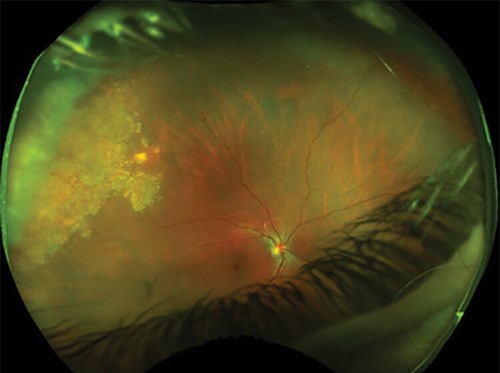 Figure 1: A lesion can be seen in the right superotemporal periphery of the retina on fundoscopy. 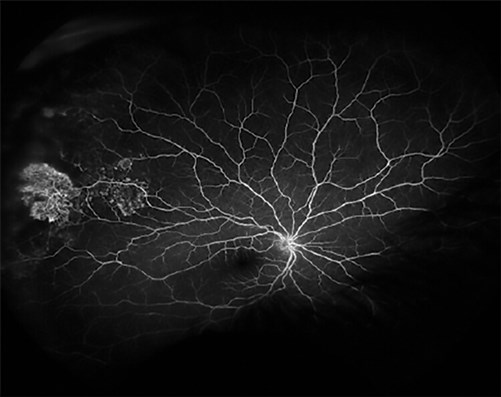 VPTR are uncommon, and can occur either idiopathically as a primary tumour, or secondary to pre-existing ocular disease. Limited epidemiological studies have led to difficulties in estimating prevalence rates. Shields et al. [3] classified the clinical manifestation of an acquired retinal haemangioma, or vasoproliferative retinal tumour in 103 patients. The retrospective review found 74% of cases were primary and 26% secondary with pre-existing ocular disease. In most VPTR there is unilateral involvement of one eye, with bilateral involvement being seen in secondary disease. Although VPTR can present in any age group, there appears to be a higher incidence of diagnosis in those aged between 40-60 [1]. In secondary disease, where there is a pre-existing ocular condition, the most common association found was intermediate uveitis (28%), with other pathologies including retinitis pigmentosa, toxoplasmic retinitis and retinochoroidal coloboma.

The pathogenesis of VPTR is still not fully understood. Histopathologically, they represent retinal gliovascular proliferations of varying degrees [4]. What has yet to be agreed upon is whether the glial, or vascular proliferation is the initiating component in the disease. One of the earliest described reports of VPTR is from 1966 [5], where Henkind and Morgan [5] narrated a small group of patients that underwent enucleation for severe ocular disease of unknown aetiology.

The histopathological features showed deep retinal exudation, with vascular malformations in the retinal periphery. Their findings were postulated to be of congenital variance consistent with histopathological changes seen with Coats disease. Although a number of reports of retinal angioma like Coats disease were subsequently described, it was not until a case series by Laqua and Wessing [6] that differentiated this disease, reporting consistent findings of retinal telangiectasia, aneurysm formation, lipoidal material deposit, and exudative detachment unilaterally in the temporal peripheral retina. These were reported as peripheral retinal telangiectasis, likely to simulate a vascular tumour or melanoma.

Although it can be difficult to distinguish VPTR from other intraocular tumours, the diagnosis should be considered in patients on the basis of clinical examination findings, and differentiation between clinical features aforementioned above.

The key features in diagnosing a VPTR can be ascertained with clinical history, ophthalmic examination and findings on fluorescent angiography. These tumours visually appear as a mass in the peripheral retina lined with telangiectatic vessels, giving appearances of haemorrhage and exudation over the lesion.

One difficulty is the differential diagnosis of retinal capillary haemangioma commonly seen in Von Hippel-Lindau (VHL) disease [7]. However, the distinguishing factor between these two is that the retinal vessels in VPTR are not large and tortuous, whereas in retinal angiomas of VHL disease, this would be a characteristic finding. If VPTR is suspected as a differential diagnosis, it is important to consider and differentiate the lesion found from retinal angiomas seen in Von Hippel-Lindau disease. Another differential diagnosis to consider is that of choroidal neovascularisation [8], especially in association with retinal detachment, subretinal exudate +/- haemorrhage. This is usually seen in wet age-related macular degeneration in the older age demographic. However, it is important to note that in choroidal neovascularisaiton, there is a lack of ‘retinal feeder vessels’. These are important clinical features to consider upon examination when considering such a differential.

Amelanotic melanomas [8], especially when situated peripherally with associative exudation, may be difficult to distinguish with vasoproliferative tumours. In a large proportion of cases, the choroidal origin of tumours can often be identified against retinal origins. However, in cases where establishing a diagnosis is difficult, intraocular biopsy can be considered.

The management of VPTR varies dependent on whether it is a primary or secondary tumour. Literature has highlighted a number of treatment modalities, including selective / direct laser photocoagulation, episcleral brachytherapy, transconjunctival cryotherapy, and most recently immunomodulatory therapy with biologics [8]. Patients that present with primary, small and mainly asymptomatic lesions can usually be treated with observational / conservative management providing there is no significant exudate or additional ocular involvement. These patients should be monitored by regular fluorescent angiography, and referral to the ocular oncology MDT should be sought in the instance when an increase in size of the lesion has been identified, or if ocular symptoms are worsening.

Surgical techniques explored for management are based on size of the tumour and degree of ocular involvement. Earlier treatment therapies included perforating diathermy coagulation [9] dating to the 1930s. This technique itself used coagulation perforations around the tumour, whilst using indirect ophthalmoscopy to monitor for potential retinal perforations. Perforating diathermy was the technique of choice until photocoagulation and cryotherapy were introduced.

Transconjunctival cryotherapy [3] is one of the most common treatment options described in current literature and is considered in patients with tumours of <2mm thickness in apical diameter. In this method, a triple freeze-thaw cycle is used. The aim here is to cause tumour regression and restore visual acuity, however, with extensive and repetitive cryotherapy in larger tumours, there are increased risks of subretinal exudation, fluid and haemorrhage.

Local transscleral resection has been reported as a treatment in patients with large vasoproliferative tumours with associated exudative detachments. A study from 2000 [11] used transscleral resection in patients with ‘reactionary retinal glioangiosis’. The procedure involves creating a lamellar scleral flap over the tumour, with sulphur hexafluoride being injected acting as an endotamponade, followed by resection of the tumour from the retina along the deep scleral lamella. Patients that display significant exudative detachments on examination are difficult to diagnose due to the possibility of choroidal melanoma. Transsceral resection should be considered in these cases where histological sampling may aid diagnosis, whilst potentially preventing unnecessary enucleation.

In clinical practice, most management options for VPTR should be considered on a case-by-case basis. Patients with primary, smaller asymptomatic lesions can usually be conservatively managed with observation. In patients with larger tumours +/- exudative involvement, transconjunctival cryotherapy or plaque brachytherapy are usually the more common treatment options chosen. However, it is still important to consider that diagnostic difficulty may arise in certain patient groups, where referral to MDT should be done and procedures that provide histological analysis may be sought. It has also been postulated that patients with pre-existing medical conditions that develop vasoproliferative tumours may benefit from consideration of biologic therapy, as demonstrated in a study by Japiassu et al. [12] where tumour regression occurred following systemic infliximab in a patient with a rheumatological connective tissue disorder.

Vasoproliferative tumours are rare ocular presentations that can present in otherwise systemically well patients. Reports from as early as 1960 have described cases of VPTR and there has been continuous evolution in the optimal management strategy for these patients. Treatment modalities can vary from diathermy coagulation to more recent improvements in transconjunctival cryotherapy and immunomodulatory therapy.

As clinicians, it is important to carry out a thorough ocular examination and take a focused clinical history. A number of patients present with secondary complications (i.e., retinal detachment, epiretinal membrane formation, vitreous haemorrhage and macular oedema), and VPTR should be considered when thinking of differential diagnoses. Patients with suspected VPTR should be referred to a tertiary centre for an ocular oncology MDT. The images from fluorescent angiography should be forwarded with the referral form where optimal treatment strategies can be determined.

Eye News would like to thank Annie SeeWah Tung for her excellent work on this section over the last two years and welcome Abdus Samad Ansari as the new section editor. 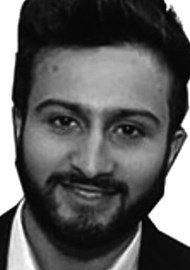