The embryology of the eye
By Jacob Cook

Nobody claims to like embryology. At least nobody I know. It has been a neglected part of the curriculum since time immemorial and a vicious cycle occurs in which those with an incomplete understanding fail to appreciate the inherent beauty and relevance of embryology and thus a dry subject becomes not only difficult to understand but also without relevance.

This is a great shame because of all subjects embryology is the most fascinating and understanding its intricacies make a full appreciation of the human body possible. Our flaws and diseases go from sudden and unexpected surprises to catch out the unwary doctor to all too predictable design flaws that can be expected and prepared for. One of the major advantages to speaking Welsh is that 40% of its vocabulary is derived from Latin and many difficult anatomical terms my English brethren struggle with are readily understandable to us. Braich means arm, as in brachial. Ffos means ditch, as in fossa. I could go on. Understanding embryology gives one the keys to understanding pathology and disease. If you know the language you know the meaning. Let us look into the language of eye development. The embryology of the eye. 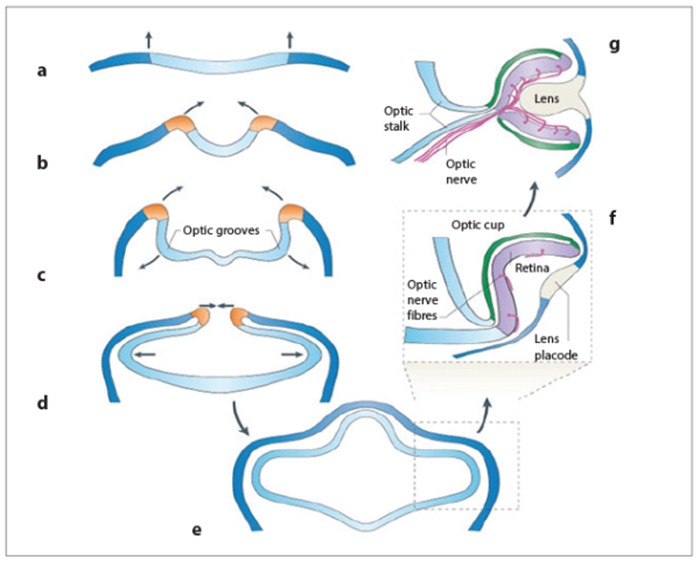 Figure 1: The stages of eye development.

A full and remembered understanding of eye embryology comes from an appreciation of how structures initially form. The first stages of eye development are evident as early as the beginning of the fourth week; indents called the optic grooves or sulci appear at the cranial pole of the embryo and within the cranial fold (see Figure 1a, b and c). As the fold closes to give rise to the space that is the beginning of the brain, the neural tube, these indents transform from being superficial features of negative space to being diverticuli of the forebrain itself (Figure 1d). What once poked inward now pokes outward, albeit from the inside. Say a very heavy man gets on a very very soft mattress with his arms extended, and lies down on his stomach. He would initially be denting the mattress in and making a groove.

If the bed is soft enough you can imagine he might sink into it deeply; imagine one of those nightmare scenarios where the mattress then proceeds to close around him and trap him inside the mattress, so soft it is. The man extends his arms out and what once formed a groove in the mattress by his arms now form outpouchings when viewed from the outside, when, say, his wife walks into the bedroom and sees two bulging bits of mattress that is the only sign of her husband’s arms flailing around inside the bed.

Initially these optic vesicles are best described as crude bud-like forms whose surface is continuous with the diencephalon. They grow laterally into the mesenchyme and toward the surface ectoderm and adopt a shape similar to a mushroom with an everted head, or goblet, known as the optic cup. Reciprocating with this cup is a feature of the surface ectoderm called the lens pit which deepens and invaginates into the space created by the cup, until the touching sides of the ectoderm fuse behind it leaving an independent spherical structure enveloped by the cup, but divided by a layer of mesenchyme (Figure 1e, f and g).

This would be the equivalent of the man in the bed, perhaps in his desperation and fear of suffocation, extending his arms outward as far as he can, his clenched fists being the optic vesicles and his arms the optic stalks. He then grabs onto the sides of the mattress, opens his fists to form the optic cup, then grabs the external mattress surface and in a fit of desperation tears a piece off with both hands which then fall lifelessly back into the soft mattress. The pieces of mattress edge found in his clenched fists are the lens vesicles. There our analogy must end as the bed is not a living tissue and the torn pieces of external mattress cannot heal closed. The mattress cover would be ectoderm, the man and his arms neuroectoderm and the mattress stuffing mesenchyme in this analogy though.

It is through this mesenchyme that blood vessels grow. The vessels run parallel to the optic stalk and soon organise themselves into a linear tract, the choroidal fissure, within the surface of the stalk and supply a pathway into the mesenchyme dividing the optic cup and immature lens. These vessels are called the hyaloid artery and vein.

This summary describes approximately days 21 to 35 of development and we will now see how each individual part develops. An understanding of this stage will be a foundation to the details that follow, and ultimately make sense of it all.

The optic stalk that joins the forebrain and the interior of the optic vesicle is the future optic nerve. The choroidal fissure that develops at the underside of the optic vesicle extends into the stalk also. The axons of the retina and blood vessels pass through this opening. By the third month the mesoderm that forms the connective tissue of optic nerve along with minute capillaries enter the optic nerve. The outer covering of the nerve, i.e. dura, arachnoid and pia, develop between three and seven months, the lamina cribrosa develops later. Myelination of the optic nerve starts at about seven months gestation from the cephalic end, extending towards the lamina and stopping short at this point, ideally.

The retina is formed from the optic cup. As a consequence of how it arises it is double layered; the outer layer becoming the retinal pigment epithelium and the inner layer, nearest the lens vesicle, becoming the neural retina. Both of these layers are continuous with the wall of the forebrain. The space between them fuses during the foetal development, however, this join displays weakness expressed through the pathology of retinal detachment.

The inner layer differentiates into a thick neuroeopithelium due to its proximity to the lens vesicle and related growth factors. It is this inner layer that divides and stratifies, initially into the inner and outer neuroblastic layers. These two proliferative beds of cells are, in turn, surrounded by membrane; the external limiting membrane and the internal limiting membrane. The external faces the retinal pigment epithelium and the internal faces the lens. The neuroblastic layers give rise to all of the six major cell classes that make up the mature retina. The order of this differentiation is preserved by evolution and creates the order we are familiar with (Figure 2): 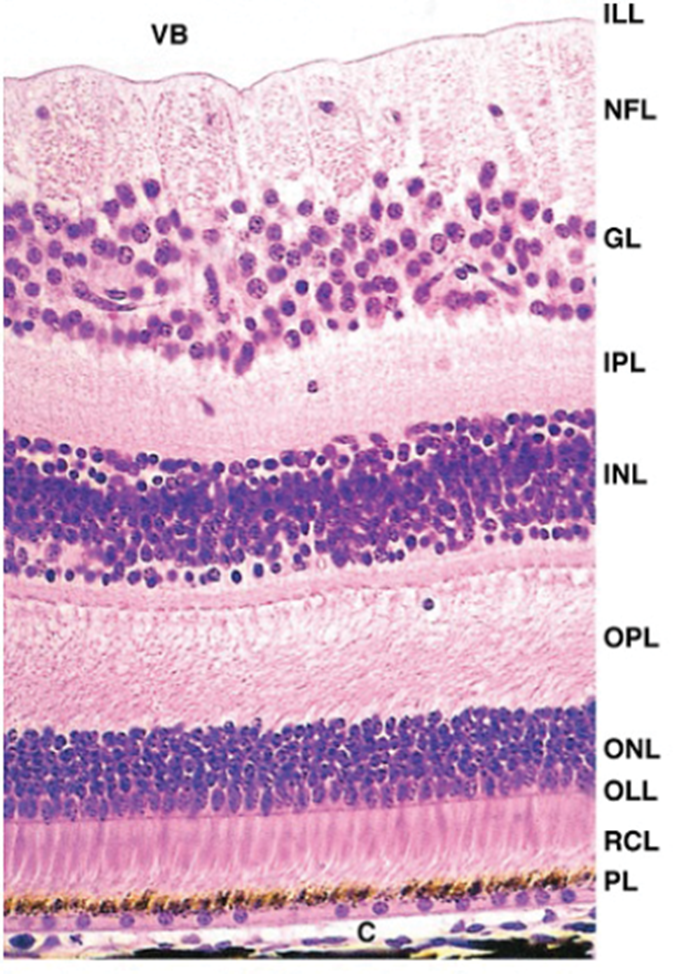 Development of the macula differs from the rest of the retina. Initially there is fast development in area of macula up to the third month of life, then there is a slowing of growth while rest of retina grows at the usual pace. This state of retardation persists up to the eighth month then it starts growing in the same manner as the rest of the retina. Thus its development is not complete by ninth month. To attain full development macula has to wait up to four months of post natal life. At six months of foetal life it is thicker than the rest of the retina. By the seventh to eighth months it starts thinning. The thinning is due to spreading out of ganglion cells from the central part, i.e. the fovea, which at birth has only one layer of ganglion cells left. The outer nuclear layer is also single layered.

An important and global concept in this discourse is an understanding of where the choroid and the sclera come from. As the optic cup has its origins as a continuous layer of the surface of the forebrain we can directly describe the choroid and the sclera as being ‘like’ the pia mater and the dura mater of the brain. These develop from the mesenchyme immediately adjacent to the posterior part of the developing eye. The choroid is pigmented and vascular. The sclera, which is continuous with the dura mater that surrounds the optic nerve, is tough and fibrous.

The sclera surrounds the whole optic apparatus and is continuous with the stroma of the cornea. The choroid feathers into the ciliary processes and is responsible for the vascular centres of these structures.

As we have already discussed, the lens begins development from an out-pouching of the surface ectoderm at approximately day 35. It is surrounded by mesenchyme and sits in the middle of the optic cup. The deep, or posterior side, goes on to form the lens epithelium made up of transparent epithelial cells. This characteristic is due to the form of the cells being very long and thin. They grow from the posterior surface forwards subsuming the space in the middle of the sphere and are called primary lens fibres. At the half-way point of the lens (called the equatorial zone) these primary fibres are met by secondary lens fibres that have arisen from the anterior surface (Figure 3). 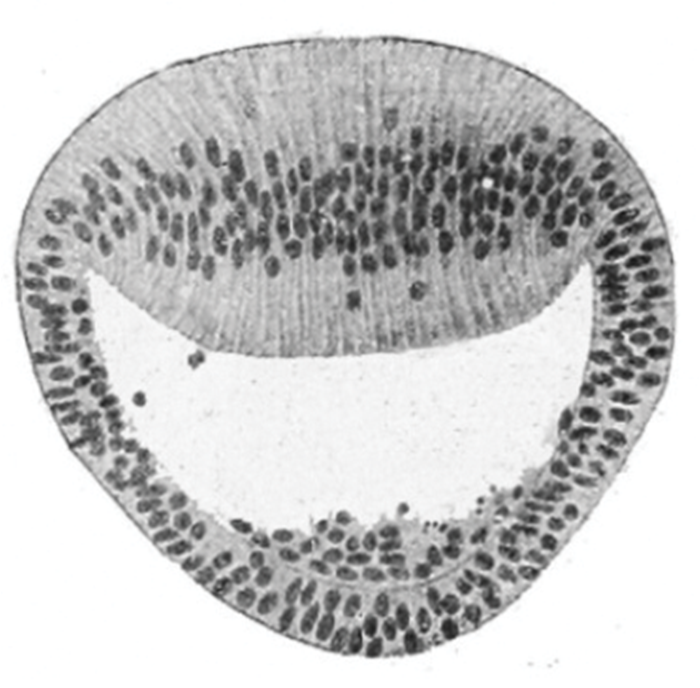 Figure 3: At the half-way point of the lens (called the equatorial zone) these primary fibres are met by secondary lens fibres that have arisen from the anterior surface.

Initial lens development is nourished by the hyaloid artery and the tunica vasculosa lentis, which is the vascular bed around the lens – the anterior part of which is called the pupillary membrane. However, this ceases during the foetal period and the lens relies solely on diffusion from the aqueous humour – its anterior relation. The hyloid artery retreats throughout foetal development leaving the hyloid canal through the middle of the vitreous body.

This is derived from three embryological sources:

It is multi-layered, avascular and transparent.

The anterior and posterior chamber

These two chambers can communicate via the scleral venous sinus which is the aqueous outflow of the anterior chamber into the venous system.

This is a specialised part of the choroid and is invested by projections that become the vascular cores of its processes. This is another example of different types of embryonic tissue coming together in maturity to perform an allied function. The pigmented part is continuous with the pigmented epithelium; the original outer part of the optic cup. This layer of tissue surrounds the smooth ciliary muscle that ultimately provides the contraction to focus the lens. This muscle is derived from mesenchyme that was once at the rim of the optic cup.

This structure is just anterior to the ciliary body. It also develops from the rim of the optic cup and grows inward to partially cover the lens. It is continuous with the ciliary body, pigment epithelium and neural retina. The connective tissue is born of neural crest cells.

It is an important note that the dilator and sphincter pupillae muscles derive from the neuroectoderm of the optic cup.

As mentioned earlier, understanding the anatomy and embryology gives us the key to understanding pathology. Having read and hopefully understood the above we now have this key in our possession. Suddenly understanding what goes wrong is so much simpler and is in fact a large subject all by itself. In an upcoming article we will explore how we can relate developmental clinical problems of the eye to its design and, to put it bluntly, its designs flaws. It is said that we understand our creator better through the things He got wrong rather than the things He got spot on. I myself am unsure of the role of a creator in the design of the eye but it is certainly true that we are now in a position to better understand developmental ophthalmic disease. 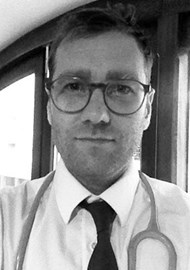