The fascinating world of embryology is both beautiful and practical. It is a home video of our evolutionary history through the ages from the single cell through to the life aquatic, the development of gut, limbs and brain, and most interestingly of all; the eye.

The eye is particularly fascinating because it is used by supporters of so called ‘intelligent design’ to advocate an inherently indivisible nature to the most sensitive sense organ of them all and as proof for a divine creator being. Understanding ocular embryology is one thing but the practical aspect arises when we begin to see how the process can go wrong and how disease can occur. To follow on from last issue’s introduction to the topic, let us explore some practical ocular embryology.

The eye continually develops throughout gestation as a rapidly changing structure. It is important to have some knowledge of the details of this process to help understand the pathological and clinical problems that may be associated with mal-development. Once the tissues are differentiated they still need to simply get bigger. The diameter of the eyeball grows by nearly 40% during the final 12 weeks of pregnancy and as such there are a number of ophthalmologic disorders associated with prematurity such as retinopathy, amblyopia, strabismus and refractive error. Neonatal vision is tested in the 24 hours after birth and again at six weeks. It is important that any defect is identified and corrected before the point at which the patient can become permanently visually impaired.

The most basic disorder in the development of the eye is that the eye fails to develop at all. This is called anophthalmia. Complete anophthalmia is exceedingly rare and usually associated with other craniofacial abnormalities. Interestingly, in this case, the extraocular muscles form along with the eyelids even if the eye itself is entirely absent. Microphthalmia occurs when the eye does form although it is smaller and associated with some degree of disordered development. This might include a coloboma.

Coloboma is Greek for ‘defect’ and can manifest itself in myriad forms. It can affect one or many parts of the eye including the iris, optic disc and retina. The choroidal fissure is a tract in which blood vessels are laid in order to nourish the developing eye. This might be considered akin to builders running temporary wiring and piping right through the middle of a kitchen they are installing to help with the building process, which will be removed prior to the owners of the house returning to use their kitchen. Indeed, while the wires and piping may have very much helped the builders install the kitchen, were they to remain they would vastly reduce the owners enjoyment of their new kitchen as they would get in the way, be a tripping hazard, and generally look cosmetically out of place. A coloboma is a defect that results from an abnormality of the closure of the choroidal fissure in the inferonasal quadrant of the developing optic cup in the sixth week. Closure starts at the equator and extends anteriorly and posteriorly. Incomplete closure creates a defect of any size from the margin of the pupil to the optic disc, which may vary from being very subtle to being massive and unmissable. Embryological appreciation is therefore key in understanding this disorder. 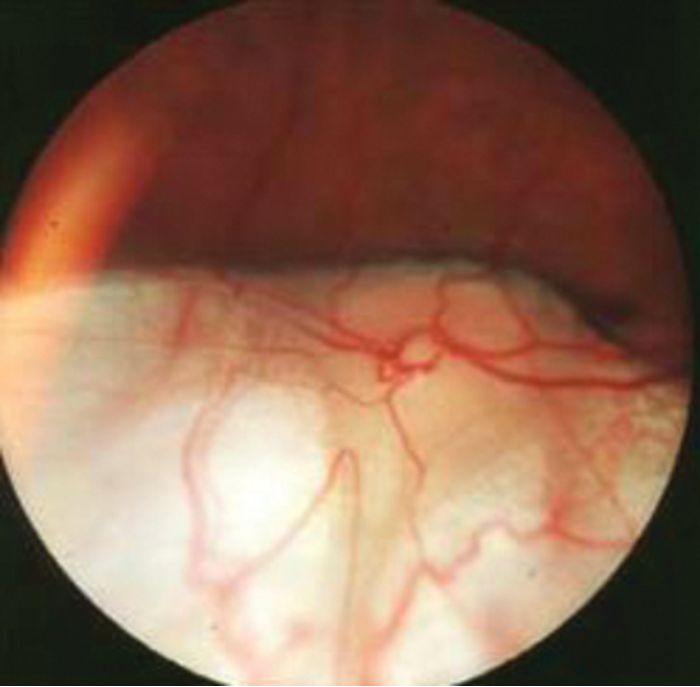 Figure 1: A coloboma affecting the optic disc and inferior retina.

A coloboma of the iris, however, can be seen perfectly clearly with the naked eye and appear as a ‘keyhole’ shaped pupil. If the coloboma is limited to the iris then it is called ‘coloboma iridis’. Some people use the term ‘cats eyes’ to describe such a condition.

Colobomas have varying degrees of impact on long-term vision and correlate with the different structures which may be affected. A coloboma of the iris may have no impact on the vision. On the other hand, a defect which runs through the macula can greatly affect the visual acuity.

A retinocoele is a variant of a coloboma in which retina herniates through the gap formed through malclosure of the choroidal fissure.

Extrapolating our analogy above about the building of a kitchen, imagine a group of builders complete the installation but leave the now unneeded wires and drainage pipes running right through the middle of the revamped room. This amounts to the hyaloid artery and vein in the eye. If the anterior portion remains intact then so called persistent anterior foetal vasculature is said to exist, although the name until recently was persistent hyperplastic primary vitreous. This mass of tissue behind the lens can contract and pull the ciliary processes into full view, as well as causing cataract and leukocoria.

If the posterior portion of the hyaloid system remains then persistent posterior foetal vasculature is said to exist and is most often seen as a dense fold of condensed vitreous extending forward from the optic disc to the ora serrata and can result in a retinal detachment.

A persistent pupillary membrane is not a defect of any part of the hyaloid artery system and is in fact located as the name suggests in the pupillary region, although it is derived from incomplete atrophy of a vascularised blood supply to the foetal lens. It does not normally cause any issues, unlike its hyaloidal cousins, although lens opacities and cataracts are not unknown.

Other conditions that relate specifically to the embryology of the eye include retinal detachment, congenital glaucoma and congenital cataract. All three of these conditions can give rise to leukocoria or white reflex of the pupils during ophthalmoscopy. Leukocoria is Greek for ‘white pupil’ (see Figure 2).

Figure 2: This child’s right eye has a white pupil on photography, a sign known as leukocoria.

Retinal detachment relates to the poor fusion between the outer and inner layers of the optic cup and the intra-retinal potential space remains. The separation of the neural and pigmented layers may be partial or complete and may result from unequal rates of growth which would put strain on the knitting and may lead to separation.

Congenital glaucoma is an abnormal elevation of intraocular pressure in the newborn and is usually caused by a defect in the mechanism by which fluid leaves the aqueous humour. This may have a genetic or infective aetiology and it is associated with rubella infection in early pregnancy. It is a serious and sight-threatening condition where prompt diagnosis and treatment can help optimise a child’s vision. It is therefore important to be aware of the signs of congenital glaucoma in a baby. 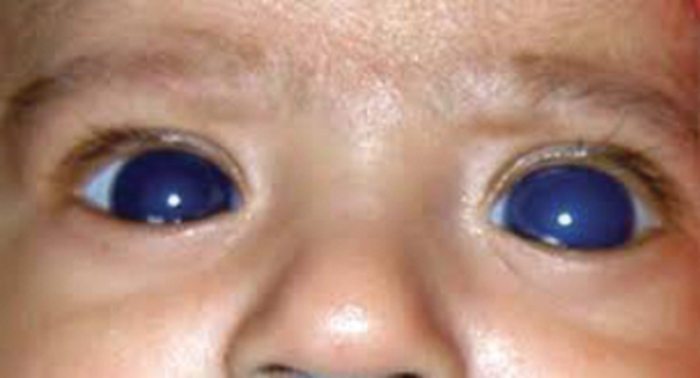 Figure 3: This baby has bilaterally enlarged eyes due to congenital glaucoma. This is known as buphthalmos, or ‘ox eye’.

The prominent hallmark signs of this condition are buphthalmos, Greek for ‘ox’s eye’ meaning an unusually large eye, and lacrimation. The corneas may appear cloudy with associated Haab striae, and the child may be photophobic. Haab striae are horizontal breaks in Descemet’s membrane and are best remembered as both Haab and Horizontal start with the letter ‘H’. In any newborn with excessively watering or tearing eyes a diagnosis of congenital glaucoma should always be considered (see Figure 3). If congenital glaucoma is suspected, urgent referral to a glaucoma specialist should be sought without delay to action prompt treatment.

A congenital cataract is a lens opacity which is present at birth. Since the lens is the focusing mechanism for directing light onto the retina, having a cataract is like looking through a frosted glass. The word cataract comes from the Latin word cataracta meaning waterfall or cascade. The River Nile has six famous cataracts from Aswan in the north to Bagrahwiyah in the south, although the river itself flows from south to north. Looking through a waterfall is similar to the vision that results from having a cataract, or so it was apparently the case to those physicians of classical antiquity.

Cataracts have many causes and are associated with various chromosomal anomalies, genetic syndromes, infections, trauma and metabolic diseases.

Approximately one third are genetic, one third associated with systemic disease and one third idiopathic. Congenital cataracts may be unilateral or bilateral and can cover a broad range of severity. Some lens opacities are visually insignificant and do not progress whilst others can produce profound visual impairment. Cataract is one of the leading causes of blindness in children and one of the important causes of amblyopia. Early detection of cataract is therefore important as this is a potentially treatable condition.

Visual development begins at birth and continues to eight years of age, with the majority of the process happening within the first three years. During these first three years any reduction of retinal stimulation can result in amblyopia or ‘lazy eye’, and its severity is proportionate to the density of cataract and the amount of time it remains untreated.

Before ending the embryology series we should consolidate the building blocks of the embryo, the germ layers, and the genes that regulate their behaviour. The outside structures such as the cornea, conjunctiva, lids and lacrimal passages, as well as some inside structures such as the lens (via the lens vesicle) and a portion of the vitreous are derived from surface ectoderm. The neuroectoderm is responsible for the neural structures and their close associates, such as the retina, optic nerve, retinal pigment epithelium, iris epithelium and dilator and sphincter pupillae. The neural crest cells keep uveitis specialists in work by developing into the choroid, the ciliary muscles, the corneal endothelium, a portion of the sclera, the optic nerve sheath and the orbital bones. Lastly the mesoderm, sandwiched in the middle, develops into the extraocular muscle, a portion of the sclera and a portion of the vitreous. The portion of the sclera derived from the mesoderm is classically the temporal portion with the remainder being derived from neural crest cells. Quite why this comes up in exams so often is beyond me, but it does, so you must know this fact.

By far the most important gene that regulates eye development is the intriguingly named paired box protein 6 gene, more commonly called PAX-6, found on chromosome 11. Gene mutations here produce a very disordered eye and classically aniridia and Peter’s anomaly are due to mutations in this gene. Anterior segment dysgenesis has also been shown to be related to defects in the FOXC1 gene, on chromosome 6, and the PITX2 gene, on chromosome 4. There are masses of other genes that regulate the development of the eye but if I mention more it will become massively confusing as remembering these genes is difficult as they do not relate to anything sensible that we see in the world around us. These ones mentioned here, however, are the ones you really need to know.

The embryology of the eye is both fascinating and daunting, but knowledge of the basic principles outlined above is essential in understanding a great deal of subsequent pathology an ophthalmologist may encounter in their clinic. For this reason postgraduate exams almost always have at least a few embryology questions present, which makes understanding these principles essential to exam success.