Herein we report two cases of toxic anterior segment syndrome (TASS) following uneventful cataract surgery. Both patients presented 24 hours after their uneventful operations with painless blurred vision in the operated eye. The inflammatory reaction was controlled successfully with an intensive regime of preservative-free dexamethasone drops. TASS can have devastating consequences for patients if not identified or mistaken for endophthalmitis, which can present similarly.

We aim to review the presentation, aetiology, prevention and management of TASS and also discuss how to differentiate it from infective endophthalmitis. An outbreak of TASS is an environmental and surgical issue that requires detailed analysis of the cataract operation, including preparations of drugs administered, as well as reviewing the operating theatres and sterilisation protocols.

A 72-year-old lady presented with blurred vision one day after a routine cataract operation to her left eye. Her past medical history included type 2 diabetes and hypertension, which were both well controlled. She had very mild dry age-related macular degeneration (AMD) in both eyes and had previously had uncomplicated cataract surgery to her right eye. Twenty-four hours following her left cataract operation, the patient noticed significant reduction in her visual acuity. She denied any pain. On examination, there was significant diffuse limbus to limbus corneal oedema. Hypopyon, fibrin deposits, flare and inflammatory cells were seen in the anterior chamber. There was no view of the posterior segment on biomicroscopy but B-scan did not show any evidence of posterior segment inflammation.

An 82-year-old lady who was on the same theatre list as the above patient, also presented 24 hours after an uneventful cataract operation in her right eye. The clinical presentation was exactly the same: reduced visual acuity, corneal oedema, hypopyon, fibrin deposits, flare and inflammatory cells in the anterior chamber of the eye. Both patients were started on the following regime of drops:

As the inflammation settled, the topical steroid therapy was tapered down over the following weeks. Both patients have done well and four weeks after their presentation, there was a significant improvement in the anterior chamber reaction. They are now being monitored at regular intervals to monitor their corneal oedema, which is still present in both cases.

TASS is a sterile postoperative inflammation that is thought to be triggered by damage to intraocular tissue by a substance introduced to the anterior segment during surgery. There have been cases of delayed presentation of TASS following implantation of a specific intraocular lens (ISert model 251) between 42 days and 137 days after implantation but the majority of TASS cases occur 12-48 hours after the operation, with the most common complaint being blurred vision [4]. On clinical examination, patients present with limbus to limbus corneal oedema (Figure 1) as a result of toxicity to the endothelial cells. Significant anterior inflammation is seen as an increase in inflammatory cells, which may settle to form a hypopyon. Flare and fibrin formation are other common findings in TASS (Figure 1). 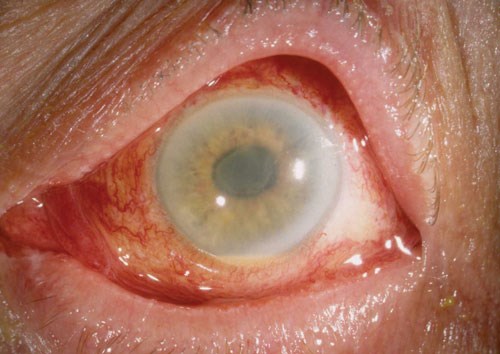 Damage to the iris following the toxic substance and inflammatory response can lead to an irregular or permanently dilated pupil.

Involvement of the trabecular meshwork can also lead to secondary glaucoma, which may be difficult to control. Regular monitoring of intraocular pressure (IOP) is imperative, especially in the acute stages of this condition.

TASS can present very similarly to infective endophthalmitis. It is important to differentiate the two entities in order to manage them appropriately. Table 1 demonstrates the main differences. Inflammatory changes such as an increase in inflammatory cells, flare and the presence of a hypopyon within the anterior chamber are very similar in both conditions.

Table 1: A comparison between the clinical presentation of TASS and infective endophthalmitis.

Timing: 12-24 hours post-op
Pain: None to mild (unless increased IOP when it can be servere)
Conjunctival reaction: Minimal
Coreneal oedema: Limbus-to-limbus

The timing of the onset of symptoms postoperatively is one of the more helpful ways in differentiating between TASS and endophthalmitis. TASS usually occurs within the first 12-48 hours whereas, endophthalmitis tends to present much later, around seven to 10 days post-op [3]. The pattern of corneal oedema can also be useful. The diffuse limbus-to-limbus corneal oedema seen in TASS is not usually seen in endophthalmitis [5]. Up to 75% of patients who have an infectious endophthalmitis may also complain of pain, whereas patients with TASS rarely complain of pain unless their IOP is increased secondary to trabecular meshwork damage [5].

The management of these two conditions varies significantly. Someone who is suspected to have infective endophthalmitis has to be taken back to theatre in order to obtain a vitreous tap and administer antibiotics. TASS on the other hand does not respond to antibiotic treatment and requires an intensive regime of topical steroids. If there are any doubts, however, of an infective cause of post-op inflammation, samples should be taken for culture and intravitreal antibiotics should be administered as per the local guidelines.

There is a wide rage of potential toxic substances that can damage the corneal endothelium and trigger the inflammatory response in TASS after cataract surgery. Any ophthalmic solutions used during surgery, such as balanced salt solution (BSS), any additives, antibiotics or ophthalmic viscosurgical devices (OVDs) may cause significant postoperative inflammation [6]. Enzymes or detergents used for the sterilisation of surgical instruments can also cause TASS [7]. We review each of these in turn.

Incorrect composition, osmolarity or pH of the BSS can provoke an inflammatory reaction. Contamination of BSS caused 122 cases of TASS in the United States in 2005. Investigation by the Intermountain Ocular Research Centre at the University of Utah, as well as investigators from the United States Centres for Disease Control (CDC) found that the vast majority of patients were exposed to one particular brand of BSS that was used during cataract surgery. Samples from multiple batches of BSS were tested for endotoxin levels and one particular manufacturer was found to have levels of endotoxin exceeding the allowable limit of 0.5 EU/mL in the BSS.

Additives to the solutions, such as mydriatics or antibiotics, can also cause TASS [8]. Lockington et al. found free radicals in commonly used intracameral drug preparations, such as phenylephrine, cefuroxime, lidocaine and bevacizumab, which can induce a dose dependent cellular damage [8].

The most common preservative in ophthalmic drops, benzalkonium chloride, although safe to use on the surface of the eye, is known to be toxic to the corneal endothelium [9]. When used as a preservative in OVDs it has been known to lead to corneal oedema [10]. Stablising agents such as bisulphites or metabisulphites can also be toxic to the cells within the anterior segment of the eye and can lead to TASS [11].

Preservative free lidocaine at concentrations of 2% or higher delivered intracamerally have been known to be toxic to the endothelium. This in turn has been shown to cause corneal thickening and opacification [8].

The use of OVD’s has been common practice in cataract surgery since the introduction of Healon (sodium hyaluronate 1%) in 1979. Kim JH showed in three successive cases, that injection of denatured OVD leads to intraocular inflammation [6].

There have been multiple reports of contaminated IOLs causing TASS. Contamination of IOLs with aluminium was thought to be the cause of 147 cases of TASS between 2015 and 2016 in Japan [5]. Suzuki et al. also report 251 cases of TASS following the use of a specific type of IOL (HOYA iSert®) [14].

A retrospective case-controlled study by Yazqan et al. suggested that systemic factors such as poorly controlled type 2 diabetes, hypertension and hyperlipidemia may increase the risk of TASS after uneventful cataract surgery [15].

The American Society of Cataract and Refractive Surgery (ASCRS) funded and established the TASS Task Force to investigate and monitor any outbreaks of TASS in 2006. The Canadian Ophthalmology society also has a TASS task force, which serves to investigate any outbreaks of TASS and offer guidance on appropriate prevention and management of the condition. Some of this guidance is on appropriate cleaning and sterilisation of intraocular surgical instruments.

Firstly, it is essential that an infectious case of the post-op inflammation has been ruled out. Once this has been established, the mainstay of treatment is suppression of the secondary inflammation by topical steroids. Gutt. prednisolone acetate 1% or dexamethasone 0.1% is the initial choice of treatment [17]. The frequency of instillation is determined by the severity of the inflammation. Mild cases require drops eight times a day and, as in our severe cases, this can be increased three-fold with drops administered every 30 minutes.

In some cases, intracameral injection of recombinant tissue type plasminogen activator (25μg/0.1ml) may be required if the fibrin reaction is refractory to steroid treatment [4].

The patient requires close follow-up, especially in the first few days to monitor the response to treatment and also monitor the IOP. Inflammation within the anterior chamber can lead to damage to the trabecular meshwork as well as the ciliary body. As the inflammation settles, the ciliary body regains its function and, as more aqueous is produced, the IOP can rise, especially if there has been an inflammatory insult to the trabecular meshwork. Furthermore, if the inflammation is not responding to steroid therapy, one has to re-consider the possibility of an infective cause and a vitreous tap or a repeat culture may be required.

As mentioned above, delayed presentations of TASS may occur as a result of faulty or contaminated IOLs, as demonstrated by Oshika et al. and Suzuki et al. In these cases patients may require further surgical intervention, such as anterior chamber irrigation, anterior vitrectomy, vitrectomy and IOL removal [5,14].

Surgical intervention may also be required in severe cases of TASS where there is persistent corneal oedema secondary to permanent endothelial damage [18]. The time interval between the onset of TASS and the endothelial keratoplasty is crucial for successful surgical outcomes as demonstrated by Kaur et al. [18]. Endothelial keratoplasty, three months after the onset of TASS resulted in 100% success rate, whereas grafts performed within the first three months after the onset of TASS resulted in a high rate of graft failure. TASS can also lead to secondary glaucoma, which can be difficult to manage. IOP lowering drops are trialled first and if the IOP is not controlled with topical therapy, glaucoma surgery may be required [19]. Cystoid macular oedema secondary to TASS can be treated with intravitreal anti-VEGF or steroid injection [20].

For any case of TASS, it is advised that the surgical facility stops operations and investigates the potential causes. Any recent changes in surgical staff, IOLs, OVDs, surgical drapes, solutions, gloves, new machines, etc. should be considered as a possible source of contamination. Sharing such information with other surgeons in the area can help to contain a potential outbreak of TASS.

TASS prevention protocols, raising awareness of TASS, regularly training staff and following strict guidelines on appropriate cleaning and sterilisation of ophthalmic equipment all play a role in preventing TASS. The ASCRS, American Academy of Ophthalmology (AAO) and American Society of Ophthalmic Registered Nurses (ASORN) have published guidelines on how to clean and sterilise intraocular surgical instruments to prevent TASS, which are easily available for all members of the surgical team to access. 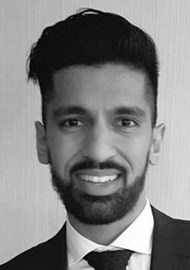