In vivo confocal microscopy, principles and use in keratitis Part 1: Principles
By Indy Sian and Scott Hau

In 1968 Maurice introduced the concept of high powered specular microscopy, it was in that very year that the first scanning confocal microscope was proposed. Marvin Minsky developed the first confocal microscope in 1955 named the ‘double focusing scanning microscope’. It was utilised to image brain cells and study neural networks. In the following two articles we aim to firstly discuss the principles behind the use of confocal microscopy in normal anatomy and corneal disease and then in part two outline the key diagnostic signs in specific pathology.

Early confocal microscopes consisted of two pinholes, the first being placed in front of the illumination source imaged on to the focal plain of the specimen. Fluorescence excited in this manner at the focal plane was then imaged onto a further pinhole placed in front of the detector. Modern in vivo confocal microscopes (IVCM) can be separated into three classes:

TSCM was originally developed by Petran and Hadravsky and the basic part of the system was modified by Nipkow who introduced a spinning disc made up of sets of conjugate pinholes arranged in spirals. It was initially produced by the Tandem Scanning Corporation (Reston, Virginia, USA) and then later by the Advanced Scanning Corporation (New Orleans, Louisiana, USA). This design is no longer commercially available.

“One of the most important advances in confocal imaging has been the development of confocal microscopy through focusing.” 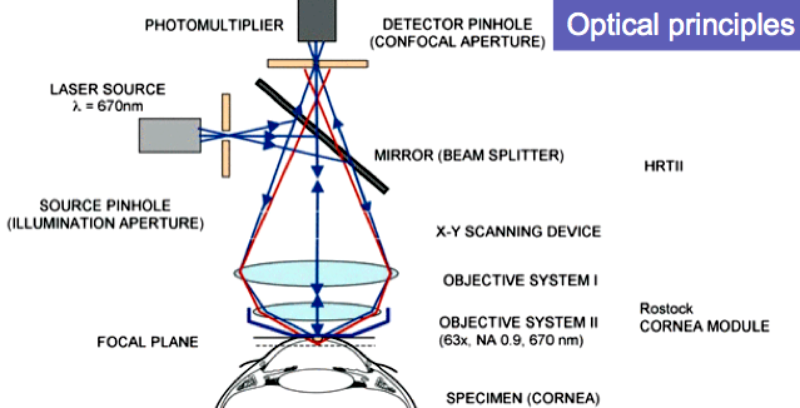 The SSCM concept was developed by Thaer and the design allowed all points on the same axis as the slit to be scanned at the same time which reduced scanning time compared to TSCM. The LSCM was developed by Webb. With the HRT III/RCM it employs a coherent 670nm diode coherent laser light (Figure 1). When confocality is achieved, out of focus light reflected from tissue outside the area of interest is eliminated, hence improving both resolution and clarity of the image. The ConfoScan 4 has a resolution of 1 micron laterally and up to 24 microns axially and the HRTIII/RCM also has a lateral resolution of 1 micron but higher axial resolution of 7.6 microns. A standard image with the HRT III/RCM is 400µm x 400µm.

The advantage of LSCM is the ability to produce serial images of thin corneal layers. The depth of focus for a Tandem scanning confocal microscope is 7-9 microns, in a slit scanning system it is 26 microns and in a laser confocal microscope it is 5-7 microns. One of the most important advances in confocal imaging has been the development of confocal microscopy through focusing (CMTF) also known as Z-Scan mode, which has enabled the measurement of corneal thickness. All of the CTMF curve points correlate directly with high resolution images, i.e. epithelial surface, the subepithelial nerve plexus and the endothelium. This aids to precisely calculate the distance between the different corneal layers. 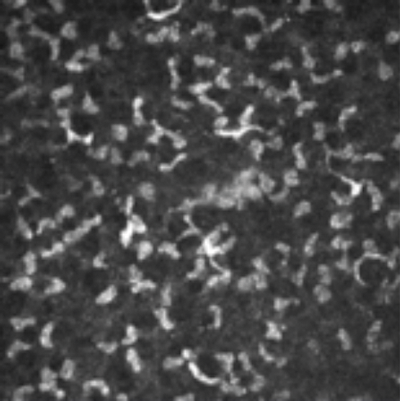 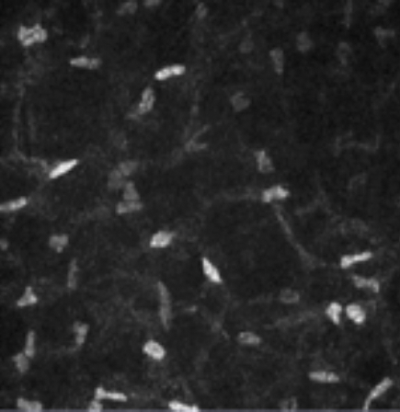 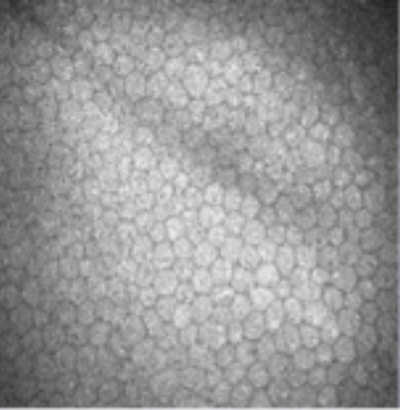 Clinically, IVCM has many applications, ranging from assessing normal corneal anatomy to disease diagnosis. The epithelial cells have bright cell boundaries and the size varies from 50µm in diameter in the superficial epithelium to 8-10µm in the basal epithelium. The subbasal nerve plexus (SBNP), which is below the basal epithelium and present in Bowman’s layer appears as well defined linear branching structures ranging in size between 4-8µm.

The corneal stroma is populated by an abundance of keratocytes and they appear as hyper-reflective cell nuclei with a higher density in the anterior stroma compared to the posterior stroma. The cell nuclei are arranged in clusters and the processes are poorly seen in normal uninflamed eyes. Corneal nerves are also occasionally seen in the stroma but the density is much lower compared to the SBNP and the stromal nerves are thicker. Keratocyte density has been reported to decrease by around 0.45% per year. The Descemet’s layer is not easily viewed with IVCM and often the transition to endothelium occurs after the last clusters of keratocyte nuclei are seen. The endothelium is characterised by a regular layer of hyper-reflective hexagonal cells surrounded by hypo-reflective cell boundaries [2,3]. 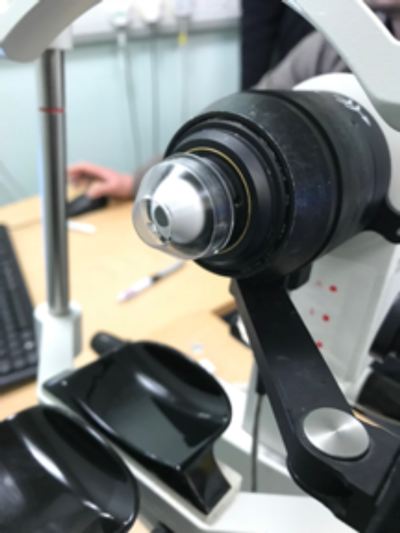 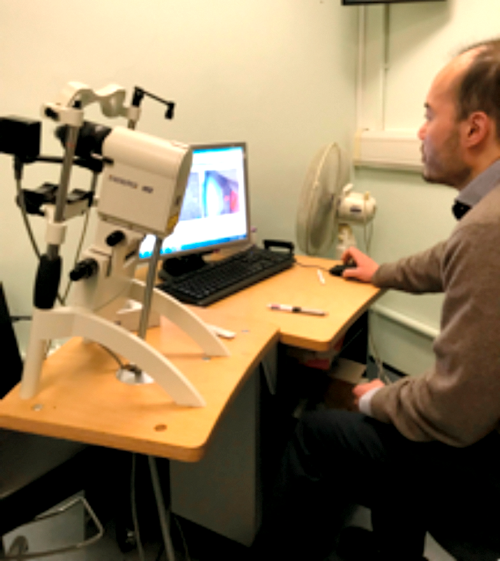 During inflammation epithelial hyperplasia, hypertrophy and metaplasia can all be seen. Inflammatory cells can potentially be differentiated by their size and morphology on IVCM. Neutrophils can be visualised as 5-15 micron sized high contrast irregular shaped lesions, macrophages up to 50 microns in size can be seen and dendritic cells up to 40 microns with branches can be detected. During image acquisition, images can be recorded as single section or video sequence at a particular depth, and volume scans whereby a series of images are recorded over a particular volume of the cornea. Unlike histological sections, which are along a transverse or longitudinal plane, IVCM images are recorded in a coronal plane. It is possible to align the instrument to obtain oblique type scans that is similar to histology but, in general, only images obtained on the coronal plane are used for diagnosis due to the higher image quality along this plane.

To establish reliable image acquisition and recording, it is important to scan the cornea in a systematic way. In keratitis, the centre of the epitheliopathy / epithelitis, infiltrate or epithelial defect is scanned first followed by the nasal, temporal, superior and inferior aspect of the affected area. When scanning each quadrant, the most anterior layer of affected cells (e.g. epithelium) is scanned first, followed by the anterior stromal layer, the posterior stromal layer of the cornea, and then finally the endothelium. With dense infiltrates extending deep into the stroma the image quality will often degrade with increasing depth. For scanning fungal keratitis, it is important to scan meticulously around the infiltrate as hyphae type structures are sometimes only identified in one section of the infiltrate. Depending on the device, the images of the scans are automatically saved by either a foot pedal or pressing a button. Five to six volume scans should be taken to ensure the whole affected area of the cornea has been examined. Further volume scans should be taken if there are satellite lesions, large affected areas on the cornea or if the image quality is suboptimal. For a peripheral corneal ulcer or infiltrate the patient is instructed to look in the opposite direction to the position of the infiltrate / ulcer on the cornea so that the incident light is perpendicular to the infiltrate / ulcer for optimum image quality [2].

The average time to perform a thorough scan in a keratitis patient by an experienced user is approximately five minutes. The examination in paediatric cases can be difficult, children from seven or eight years old onwards can be scanned dependent upon their cooperation, as the machine set up requires the patient to understand where they need to fixate and the importance of keeping their eyes still during image acquisition.

Despite this, if faced with a progressive culture / polymerase chain reaction (PCR) negative atypical keratitis it is worth attempting a scan irrespective of the level of cooperation, as one or two sets of volume images may only be required to diagnose the offending pathogen. Despite the wide applications of IVCM, there are caveats and limitations with its use. The images collected are limited to black and white technology so it is difficult to sometimes differentiate host cells from pathogenic organisms. Often initial scans are difficult to interpret due to the density of the inflammatory cellular response with repeat scans necessary at a later date. Serial images are en face in nature rather than transverse making it difficult to compare confocal images with histological sections and anterior segment OCT images. IVCM images may not be interpretable due to excessive corneal haze / inflammation – the degree of hyper-reflectivity renders interpretation of the images impossible as will an eye with a co-existing dense vascularisation or corneal scar [2]. 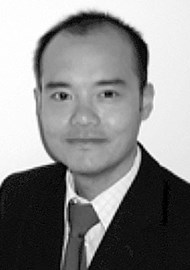