A near miss
By Lars Fuhrman and Vasant Raman

A 55-year-old gentleman presented with a ‘blurry patch’ to his left eye which he had noticed for the past two months. The visual acuity with correction was 6/5 in the right eye and 6/6 in the left eye on the Snellen chart. He gave a history of type 2 diabetes, treated with Metformin, which was poorly controlled as the HbA1c of 12.6% indicated. The examination revealed a relative afferent pupillary defect (RAPD) in the left eye. Funduscopy showed mild disc oedema and engorged vessels in the temporal half of the left optic disc. The funduscopy of the right eye was unremarkable. There were no signs of any other ophthalmic pathology including diabetic retinopathy.

Six weeks later, a nasal disc oedema had developed in the other, right eye, but his visual acuity remained unchanged. A work-up including neuro-imaging and blood tests for possible autoimmune, neoplastic or thrombophilic causes of the disc oedemas only produced normal findings, and the diagnosis of non-arteritic anterior ischaemic optic neuropathy (NA-AION) was reached. At this visit the patient mentioned as a passing remark that he was taking Taldalafil, a phosphodiesterase-5-inhibitor, against his erectile dysfunction daily for the last ten years. He was advised to abstain from the Taldalafil, as it has previously been suspected to increase the risk of NA-AION episodes [1,2].

Not following this advice, two months later the patient presented to a locum consultant who saw the patient for the first time on that occasion. In the meantime noticeable changes of the vasculature in the right optic disc had occurred (Figure 1) and the patient reported a subjective worsening of his vision. Although no other signs of diabetic retinopathy were present, the locum consultant diagnosed disc neovascularisations (NVDs) in the context of a proliferative diabetic retinopathy. A panretinal photocoagulation (PRP) was arranged, with the aim of halting the supposed proliferative disease. When the patient presented to the laser clinic the supposed neovascularisation was called into question and further investigations were arranged.

Figure 1: Disc photograph of the right eye (A) at the time when the panretinal laser photocoagulation was erroneously scheduled. Note the disc oedema and small haemorrhages (white arrow). (B) Fundus fluorescein angiography showing sectorial dilatation and angiographic leakage in the corresponding areas, but no neovascularisation.

To ascertain the nature of the disc vessel changes, a fundus fluorescein angiography (FFA) was performed (Figure 1). This demonstrated that the ‘new vessels’ in the right eye were not neovascular, but more of a pronounced sectorial dilatation of the capillaries on the optic disc. Furthermore, angiographic leakage with staining of the optic nerve head and extensive posterior drusen were observed in both eyes. 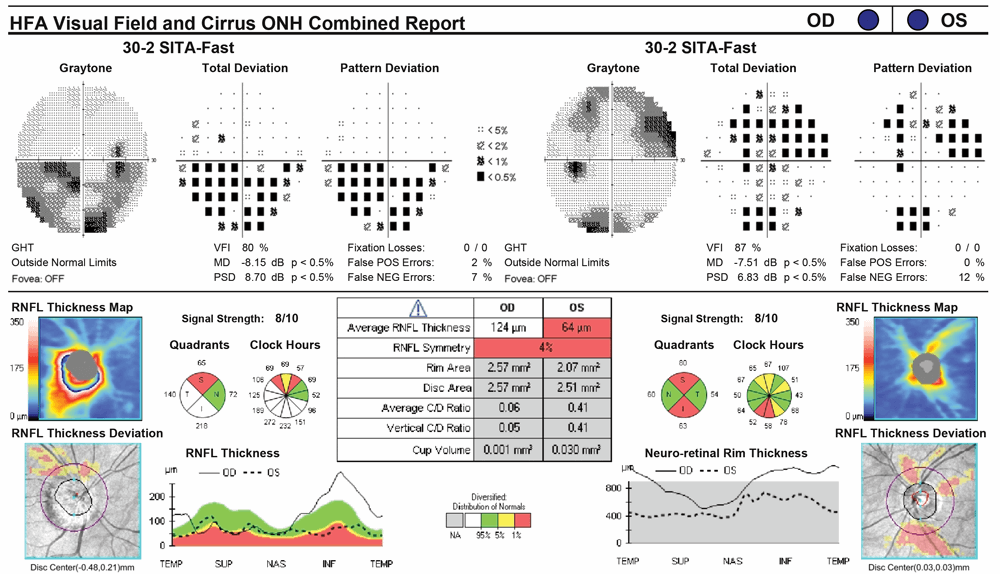 Humphrey visual field testing showed an inferior arcuate field defect in the right eye and a superior arcuate field defect with some accompanying inferior losses in the left eye (Figure 2). Optical coherence tomography scanning of the optic discs revealed thinned retinal nerve fibre layers in both eyes topically corresponding to the observed visual field defects. All of these findings were deemed to be in line with the diagnosis of a NA-AION. The differential diagnosis of proliferative diabetic retinopathy was discarded and the PRP was cancelled.

The relationship between diabetes and NA-AION is complex and in some instances surrounded by controversy. It appears that diabetes is a risk factor for NA-AION [3,4]. Hayreh et al. have described telangiectatic vessels on the optic disc as a clinical feature of NA-AION which may be characteristic for diabetic patients [5]. Their appearance may be similar to NVDs in some cases, even leading to them being described as ‘pseudohaemangiomas’ [6]. In our case, misinterpreting the telangiectasia for NVDs nearly led to an unnecessary PRP, with its inherent risks, e.g. worsening of scotopic vision or indeed visual loss from misdirected laser beams to the macula [7]. We present here the first documented case of such a near miss and also the first description of NA-AION in a diabetic patient that has possibly been triggered by using Taldalafil for erectile dysfunction.

The NA-AION in the right eye was initially detected in its incipient, asymptomatic stage, when a worsening could be expected. NA-AION is typically characterised by a sudden onset of visual field loss, which subsequently improves or remains unchanged. However, slow progression from asymptomatic incipient NA-AION to the full clinical picture has been described in up to 25% of cases [8]. When the patient re-presented to our clinic with an established diagnosis of bilateral NA-AION but constantly deteriorating vision, this may have lead to the misdiagnosis of proliferative diabetic eye disease. Keeping in mind that worsening of vision in a patient with NA-AION does not necessarily imply another pathological process may help to prevent unnecessary PRPs.

“Keeping in mind that worsening of vision in a patient with NA-AION does not necessarily imply another pathological process may help to prevent unnecessary PRPs.”

In conclusion, our case may serve as a cautionary example that disc vessel telangiectasia as seen in NA-AION may be mistaken for other neovascular formations. As such misidentifications may lead to iatrogenic harm, we suspect they may be underrepresented in the literature, whilst the increasing number of diabetic patients makes similar instances more likely. We advise everyone to routinely carry out an FFA in an effort to reduce this risk.

Two months after the cancelled laser appointment, visual acuity was back to 6/6 in both eyes with no signs of a RAPD anymore and visual field testing showed slight improvements in both eyes. Another six months later the oedema and capillary telangiectasia of the right optic disc had fully subsided (Figure 3). The patient passed an Esterman binocular field test, and was therefore still able to drive. However, against medical ophthalmic advice, he continued using his Taldalafil, though in a reduced dosage of 5mg, every second day.

We would like to thank Mr Kwabena Frimpong-Ansah, Consultant Vitreoretinal Surgeon at Royal Eye Infirmary, Plymouth for helping with this report. We are grateful to the patient for allowing the publication of his story after having given formal approval and consent. This report was presented at the South West Annual Glaucoma Group Meeting at Taunton in 2016 by Lars Fuhrmann and won the prize for the best presentation.

From the section editor:

As this is my final contribution to this column, I would like to thank the whole team at Eye News and all patients and colleagues alike very much indeed. Last but not least, I am very grateful to you, the readers, for your interest and much valued feedback over the years. It was Jon Park who once passed this column’s baton on to me and it is with great pleasure that I am now doing the same to Patrick Hughes at the South West Peninsula deanery. 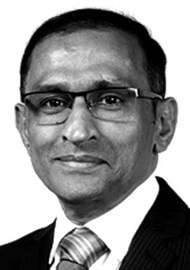 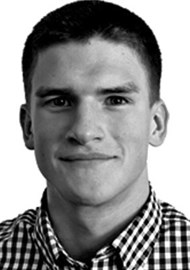