"My friend wanted to show how far he could throw that log. So, he helicoptered it over his head, faster and faster and when he let go, it hit my eye at full speed,” a young lady of 19 years told me.

The patient presented with a right-sided vertical lid laceration, located nasally to the punctum and reduced vision down to 6/60. Slit-lamp examination revealed acute anterior uveitis, traumatic mydriasis, mild vitreous haemorrhage, peripheral 360 degree commotio retinae and scattered retinal haemorrhages. There was also a crescentic, jagged, vertically orientated lesion straight through the macula, just nasal to the fovea. Through this lesion, I thought I could see the white of the sclera (Figure 1). 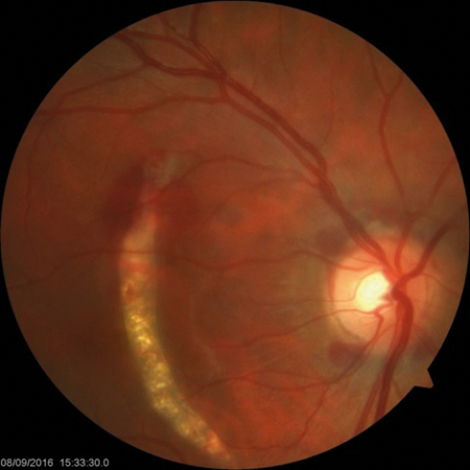 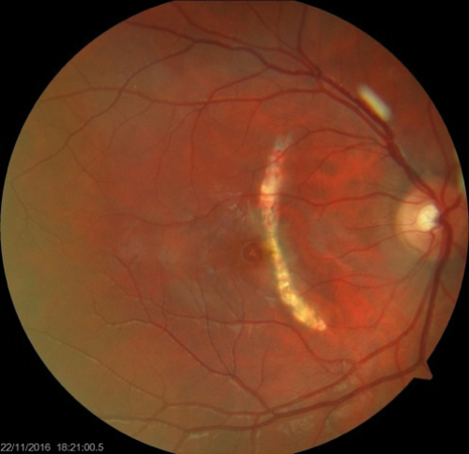 Figure 2: Right fundus photograph, three months after the injury, showing how the
retinal haemorrhage has resolved. The traumatic macular hole has increased in size.

Mr Park confirmed my queried diagnosis of choroidal rupture and took the patient to theatre the same day to suture the lid laceration and conduct an examination under general anaesthesia. This demonstrated a nasal retinal break and possible small dialysis, fortunately not yet associated with retinal detachment. The vitreous was still attached. These lesions were prophylactically treated by cryopexy. Given the size and location of the choroidal rupture, a poor visual prognosis was explained to the family. I remember vividly the great despair of the patient and her relatives who were, sadly, all in tears in the consultation room.

Her lid healed well with no significant cosmetic scarring and no epiphora. Despite the poor visual prognosis, I was surprised when she could read down to the 6/18 line a mere two weeks later. However, a few more weeks down the line, her vision became more blurred, and funduscopy and optical coherence tomography (OCT) scanning showed a full thickness macular hole as the likely reason (Figures 2 and 3a). Traumatic macular holes can sometimes close spontaneously, so a period of active observation was planned. However, two months later it had almost doubled in diameter (Figure 3b) and she was offered vitrectomy with membrane peel and gas. However, she did not want to proceed with any more surgery. She was left eye dominant and surprisingly not too bothered by the jagged scotoma and blur in the left eye coming from the choroidal rupture site and macular hole, respectively. 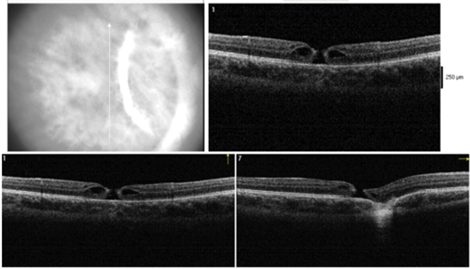 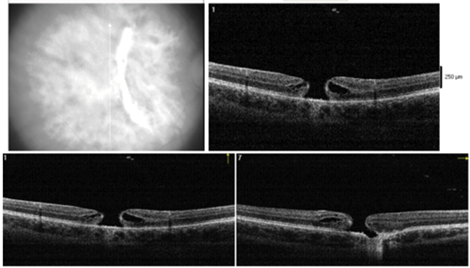 Inquiring into choroidal rupture, I learned that in 1854 von Graefe first described the condition [1], which, interestingly, was later found to also involve Bruch’s membrane and the retinal pigment epithelium [2]. It may be caused by direct or indirect trauma, whereas indirect trauma is far more common, reportedly eight [2] to thirty [3] times than with a direct globe injury. Direct ruptures are located anteriorly at the site of impact and run parallel with the ora serrata and indirect ruptures, via a ‘contre coup mechanism’, occur opposite to the site of impact as the blow to the eye sends shock waves through the globe, which coalesce at the posterior pole [2]. Perhaps this is the reason why the configuration of the choroidal rupture sometimes takes the often seen concentric shape to the disc (Figures 1 and 2), depending on different kinetic energy levels of the individual shock waves. When the eye experiences blunt trauma, it deforms and reforms. The retina and sclera are relatively elastic and can do this without fracturing. However, Bruch’s membrane is not so elastic, so it will therefore rupture when such deformation exceeds its elastic limit.

The visual prognosis of choroidal rupture has long been thought to be poor when the fovea is involved, with a possible late complication of choroidal neovascularisation. As can be seen from the OCT (Figures 3a and b), the fovea is indeed involved in our patient, still her visual acuity improved remarkably before the macular hole developed. This was first observed by another consultant in my deanery, Mr Raman, who found in a series of 32 eyes that foveal choroidal ruptures may indeed regain good central vision over a longer follow-up period and that multiple choroidal ruptures do not necessarily predict a poor visual outcome [3].

The mechanisms that cause (and sometimes spontaneously close) idiopathic and traumatic macular holes are not fully understood. Both tangential and antero-posterior traction at the vitreoretinal interface, possibly related to partial vitreous separation and foveo-macular adhesion, have been debated since the days of Don Gass [4].

In conclusion, this may be the first report that describes the delayed formation of a macular hole after choroidal rupture. It both highlights the importance of early thorough review and close follow-up of any trauma case.

What happened to the poor marksman? He is not a friend anymore.

I am very grateful to the previous author of this column, Mr Jon Park, now Consultant Ophthalmologist at Musgrove Park Hospital, Taunton, for helping with this article. We would both like to thank the patient for allowing the publication of her story.