A 60-year-old woman was referred to ophthalmology with a suspected left eye choroidal naevus. Visual acuity was unaffected in both eyes and she was asymptomatic. Ocular history and medical history were unremarkable. 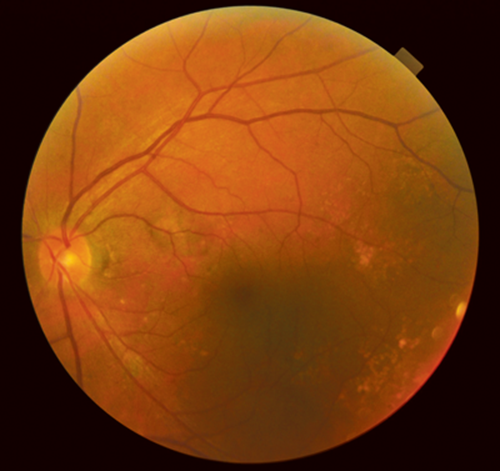 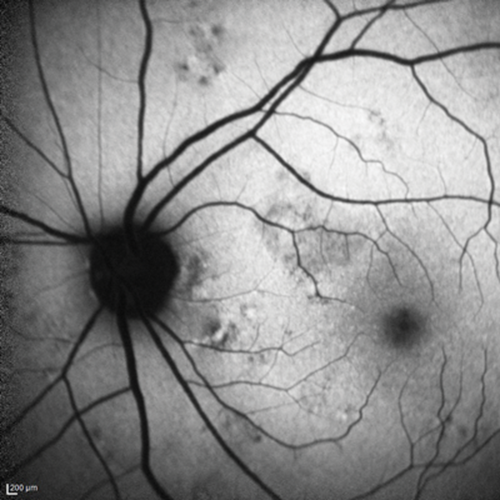 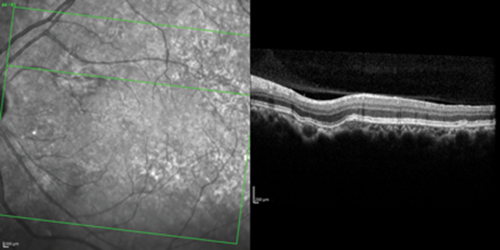 3. What is the diagnosis?

4. What is the significance and prognosis of the lesion?

1. This shows pigmentary mottling in the affected area along with scattered drusen on the posterior pole. 2. Spectral domain optical coherence tomography (SD-OCT) shows unusual excavation of the choroid with outer retinal layers and retinal pigment epithelium (RPE) conformed with lesion excavation; the chorioscleral interface appears normal, without any ectasia or posterior staphyloma. Autofluorescence (AF) confirms the hypoautofluorescence in the area of choroidal lesion.
3. This is focal choroidal excavation (FCE).
4. In some patients there may be an association with central serous chorioretinopathy and age-related macular degeneration. Although most lesions remain stable, secondary choroidal neovascularisation may occur.

Focal choroidal excavation is a recently reported clinical entity, first described by Jampol et al. [1] All lesions involve the foveal or perifoveal region. Two patterns of excavation were noted using SD-OCT. In conforming FCE, there is no separation between the photoreceptor tips and retinal pigment epithelium (RPE) only with the outer nuclear layer appearing thicker than it does in areas not affected by excavation. In nonconforming FCE the photoreceptor tips appear to be detached from the underlying RPE, with the intervening space presumably representing subretinal fluid [2].
The etiology of FCE is unclear but Margolis and colleagues hypothesised that it might be a posterior segment congenital malformation [3].
Also, because the normal choroid has been shown to become thinner with age, it is possible for FCE to become larger with time, resulting in further ischaemia to the underlying retina, atrophic changes and visual disturbances [4].
Outcome of this case: Association with age-related macular degeneration was noted, routine follow-up for monitoring visual function as no concerns were raised at the initial visit.