Pseudoxanthoma elasticum (PXE) is a progressive, inherited disorder of connective tissue that affects the skin, cardiovascular system and retina. Ocular manifestations of the disease are related to Bruch’s membrane, a thin elastic tissue layer located between the retinal pigment epithelium and the choriocapillaris [1].

This case demonstrates that the traumatic forces inflicted from a toy Nerf gun are sufficient to cause a break in the Bruch’s membrane and retinal pigment epithelium, resulting in devastating ocular injury. 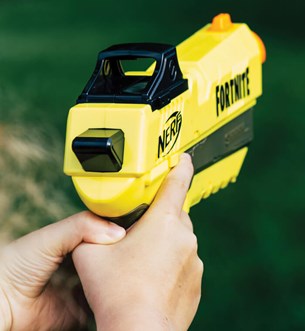 A 25-year-old female presented to the accident and emergency department complaining of blurred vision in her left eye following a blunt injury to the eye by a Nerf gun three days prior. The patient had a previous ophthalmic history of angioid streaks associated with PXE and bilateral optic disc drusen. She was otherwise systemically healthy, with no other history of ocular trauma. Visual acuity was 4/60 in the left and 6/6 in the right eye on presentation. The patient reported completely normal vision in the left eye prior to injury and recorded visual acuity prior to injury was 6/9+1 in the left eye and 6/6 in the right eye.

Figure 1a: Fundoscopy of the left eye at the time of injury (left) and
two weeks later (right) showing macular haemorrhage and a choroidal fracture. 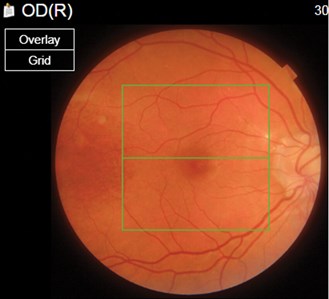 Figure 1b: The right eye.

Management of this case involved careful observation and follow-up due to the risk of choroidal neovascularisation.

Three months later, the patient returned with a slightly improved visual acuity of 6/60 in the left eye. OCT imaging demonstrated resolution of the choroidal rupture with formation of a macular scar and no further bleeding (Figure 2).

Approximately half a million people worldwide suffer from blindness as a result of ocular trauma; it is the most common cause of monocular visual impairment in those under 30 years of age [2]. Although visual outcome is largely dependent on the type of trauma sustained, prognostic factors that may be used to predict final visual outcome include severity of ocular trauma and ocular comorbidities. In this case, the patient had a history of PXE and angioid streaks, thus putting her at increased risk of poor visual outcome following ocular trauma.

While there are multiple cases reporting ocular trauma caused by airsoft guns, which utilise plastic or metal bullets, there are no other incidents of permanent visual loss resulting from the soft Nerf foam projectile [3]. Specifically, to our knowledge, there have been no previously reported cases of choroidal fracture and subsequent loss of vision due to Nerf gun injury. Current published Nerf gun injuries include traumatic hyphema, iritis, cataract, retinal detachment, corneal abrasion, commotio retinae and ruptured globe; all with full visual recovery in the long term [3]. A striking difference with these reported cases is the lack of previous ophthalmic comorbidity; which inevitably played a pivotal role in our patient.

In summary, this case emphasises the importance of clearer warnings highlighting the potential impact of ocular trauma from projectile gun manufacturers, particularly in patients with pre-existing ocular conditions. The importance of using eye protection could be demonstrated further by incorporating this information in visual advertisements.