Birdshot chorioretinopathy (BSCR) is a relatively uncommon cause of posterior uveitis which often has a relapsing and remitting course [1,2]. We present a case which demonstrates how remission can be obtained for several years using cyclosporine.

A 44-year-old gentleman presented with a nine month history of blurred vision. His only notable medical history was recurrent fungal infections of the hands and feet. 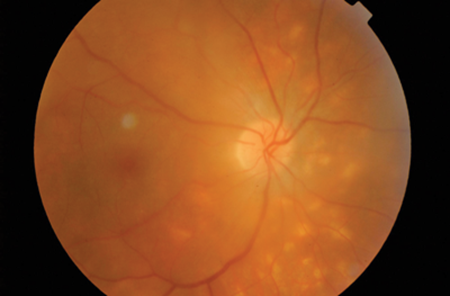 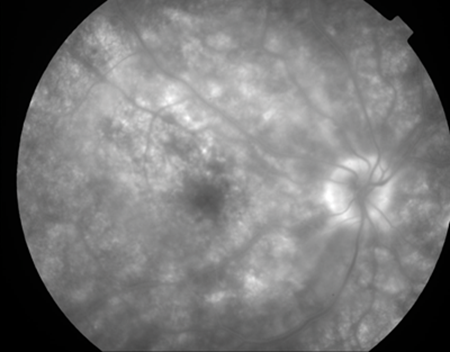 His visual acuity bilaterally was 6/9. His fundus view revealed vitritis grade II bilaterally, floaters in a lace like pattern and oedema around the optic disc, with probable exudates. Creamy yellow lesions at the posterior pole and nasal quadrants were also present (Figures 1 and 2) suggestive of white dot syndrome (e.g Birdshot, punctate inner choroidopathy). Numerous tests were done including a chest x-ray, blood tests and polymerase chain reaction (PCR), all of which were normal. A blood test for HLA 29 came back positive confirming a diagnosis of BSCR. He was commenced on oral Prednisolone 50mg once daily (od) and remained under two weekly review. After three months, as the vitritis and oedema resolved, steroids were tapered to 5mg od, and vision improved to 6/6. However, one month later, his condition deteriorated.

Although his prednisolone was increased to 10mg, on review there was still activity in the anterior chamber, vitritis grade II bilaterally, and early macular oedema. Steroids were increased to 50mg od, and it was noted he may require an additional immunosuppressant. He was subsequently started on cyclosporine 250mg twice daily (bd). After two months he developed hypertension as a result of the cyclosporine. The dose was reduced to 125mg which kept his ocular symptoms and blood pressure under control.

He remained under close review by both the ophthalmic and rheumatology department. He showed steady improvement over 18 months, with visual acuity improving to 6/5 in the right eye, 6/6 in the left, with no active symptoms. For the past two years he has remained stable and asymptomatic using only a maintenance dose of 125mg od of cyclosporine.

BSCR causes a small percentage of posterior uveitis and often presents in females over 50 [1-2]. Histopathology has shown lymphocytic aggregations particularly in the choroid which may correlate with the characteristic lesions found on examination [4]. Although aetiology is unknown, there is a strong association with HLA-29 and MHC I, which suggests a possible link with autoimmunity [5].

In the early stages, BSCR commonly presents with vitritis, retinal vascular leakage, and hypopigmented choroidal spots [2,6]. As the condition progresses complications occur as a result of retinal dysfunction [1]. Complications include cystoid macular oedema, visual field loss and atrophy of the choroid and optic nerve [1-3]. Differentials are summarised in Table 1 [2]. 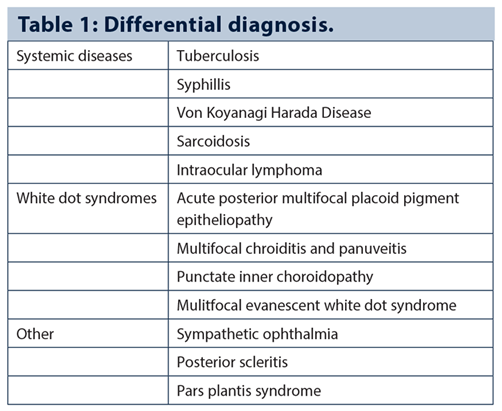 Treatment involves steroids, and a popular ‘add on’ is cyclosporine [5-7]. Cyclosporine is a T-cell inhibitor and is metabolised by the cytochrome P450 system [7,8]. Common side-effects include hypertension and nephrotoxicity, and patients should be advised to avoid grapefruit juice as it increases trough concentrations [9].

Monitoring the course of BSCR and the effect of treatment can be difficult. Various modalities have been suggested including indocyanine green (ICG) and electrophysiology [6,10].

Patients must be reviewed regularly as BSCR often has a relapsing and remitting course, and although treatment can help stabilise the patient (as demonstrated in our case study) they often have a poor visual prognosis [1-3].

Credit to Hanif Patel, Retinal Photographer, for the images.