Portable corneal topography – exploration of a prototype
By David Haider

Ophthalmic imaging devices, such as corneal topographers, are not widespread in the developing world. A small device that connects to a smartphone might be a solution to improve developing nation access to corneal imaging. I recently had the opportunity to test an early prototype device capable of just that. Ocuwell is a company aiming to bring a range of low-cost ophthalmic imaging devices to the market, with the hope of increasing access to devices of this nature. They provided an early version of their topography device to test and evaluate. 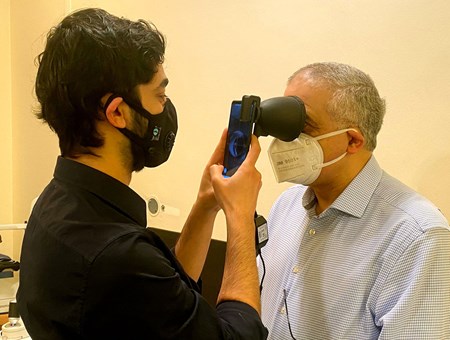 The prototype unit consists of three parts: an illuminated cone, a clamp, and an Android smartphone. The cone contains an array of pinpoint lights, with the smartphone camera situated at the apex of the cone. The purpose of the clamp is to align the device to the smartphone camera. Image capture is triggered from an app installed on the smartphone. The cone is held up to the eye and an image of the eye is visible on the smartphone (Figure 1). The light in the cone creates a map of reflections on the surface of the cornea that are captured by the app. As expected, some alignment was required to capture high-quality images, with sharp reflections. The captured images are then analysed to determine the elevations and curvature of the anterior corneal surface, and thus likely presence of diseases such as keratoconus. The obtained images were uploaded manually to Ocuwell for the analysis. A set of results showing keratoconus are reproduced in Figure 2. 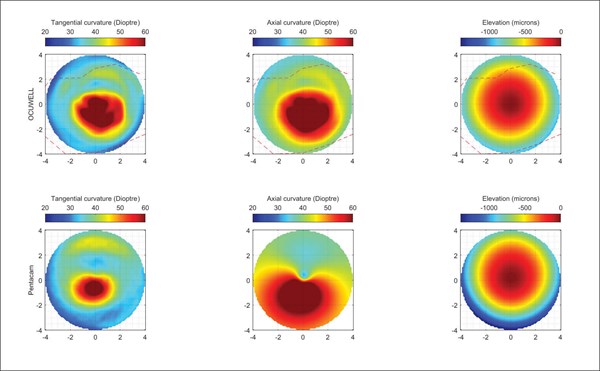 Several changes are planned before the device is ready for the market, including using an integrated infrared camera, rather than using a smartphone camera. Ocuwell also anticipates that the device will connect to the smartphone wirelessly and be powered by a rechargeable battery. When released, the upload and analysis of the imaging will be automatic, rather than needing manual intervention.

Since the primary goal of Ocuwell is to improve access to topography, the company intend to offer a range of advanced computational features, for example:

When compared to traditional devices, in addition to the advanced features offered by the software, the portable design provides a number of unique advantages:

As the device is still in prototype, there are no published papers on the physical components. Research papers have been published by the founders on the computational features. I did have access to a non-published clinical trial of 40 eyes on patients in India. The trial shows very accurate matching between the measurements obtained from the Ocuwell device versus a reference Pentacam device.

Ocuwell anticipates the device will be available in some markets in one to two years’ time. India is an example of a market (where device regulation rules are light) where early release is likely. The financial costs to obtain device regulation in Europe and America are significant. Ocuwell is seeking funding to allow for regulatory approval in the West, to allow for an eventual release in this market.

The cost of the device has not been finalised yet, but various options may be available. The analysis software (which will always be cloud based) may require a subscription, or be included, depending on the upfront cost for the device. The hope is to offer the device for a few hundred pounds sterling. This would be about one tenth of the price of the cheapest mainstream topographers.

The primary limitation at the time of testing (not already addressed in an upcoming version) is the lack of posterior corneal topography. Ocuwell is confident that it can address this limitation in a future version, but prefers to concentrate their development efforts on technologies related to anterior surface topography before moving on to other challenges.

Having used the prototype, and seen the results, I am convinced of the technical viability of the technology. Even with this early device, the usage was straightforward and did not require any formal training. I used the prototype device on family members only, to avoid the complexities of testing a prototype device on patients, including transfer of imaging data off-site for analysis.

During the review period, I was able to meet Professor Ahmed Elsheikh, a world-leading expert in ocular biomechanics and the scientific officer at Ocuwell, and Dr Ashkan Eliasy, an entrepreneur with an established reputation in the development and implementation of clinical solutions as an executive officer. 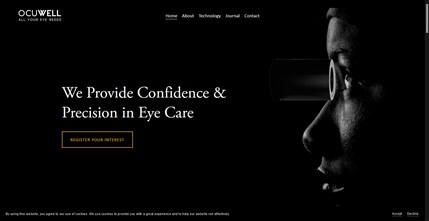