The Onyx is a newly-released (late 2021) wearable with a powered magnifier to assist those with central vision impairment. Unlike the previously covered wearable devices, this enhances existing sight. The unit can either be held against the eyes when needed, much like very compact binoculars, or worn like a pair of glasses, when arms are connected to the unit. 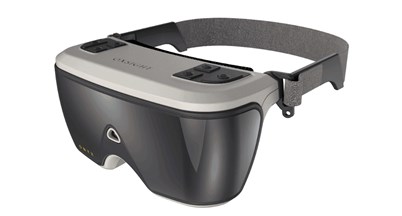 The choice will depend on the context of the situation and the residual vision of the wearer. See the image for an idea of the form factor of the device. The key features are the single, central camera on the front of the unit, the eye cups, the USB C charging port and the six buttons on the top of the unit.

The Onyx captures the image from the camera and presents it to the wearer on embedded screens within the eyepieces. In many ways the experience is a little like holding a smartphone screen to your face while the camera app is running.

The six buttons on the top of the device are tactile and easy to locate, though unusually not clearly coloured. The user would start by pressing the power button to turn on the unit. The device then starts to function almost instantly. The magnification can be easily adjusted in steps up to eight times magnification with the + and - buttons. A re-focus button is present, and a button to take a snapshot of the image in the frame. This snapshot can then be examined further by zooming or moving the head to pan round the image.

The final button is a menu button that can be used to access the advanced features of the device:

The unit was very easy to charge and use out of the box, and is a key strength of the product. Two-hour battery life with constant use is expected from a single charge, although this can be extended by use of a USB battery-pack connected to the charging port.

The build quality of the provided unit appeared good, and the unit felt sturdy and resilient. The ability to alter the IPD was welcome and effective. In use, it is clear that the sides of the device have been left open to preserve the peripheral vision of the wearer. Although use in conjunction with prescription spectacles does work, it is not particularly comfortable. Wearing the device without glasses is pleasant, and the unit is light (210 grams). The buttons on the unit require some effort to press, so no risk of accidentally triggering them.

Quality of the magnification

The main purpose of this device is to magnify and present the view to the user. To that end, the capabilities of the camera and screens are important. In the case of the Onyx, the developers have clearly had to balance quality with cost. The screens are bright and update quickly, with no significant lag present. At low to medium magnification the quality is fine, and a binocular view is presented to the user. The sharpness of the image does taper off as the zoom is increased to x8. At this point the image is grainy and detail is lost, potentially making text too unclear to make out. The level of magnification is limited to x8, which is not as high as some would likely need. Further increases would need a more capable camera and higher resolution screen. In low light the unit was satisfactory, but not as good as many modern smartphones.

The enhanced modes were a little cumbersome to access but play to the strengths of the device in viewing TV and faces rather than text.

A nice feature is the rapid restriction of the field of magnification when the wearer turns their head. This is likely present to reduce lag and thus minimise visual discomfort or nausea from using the device.

The OXSIGHT Onyx is available in the UK for £1500+VAT. This is substantially lower than other wearable / portable devices in this category, but still a significant amount. The unit can take a software update when needed and is provided with a two-year warranty.

No published peer-reviewed studies were found involving the use of the Onyx. OXSIGHT did receive National Institute of Health Research (NIHR) funding to further their device development. The NIHR site documents this, along with the case study material to support the funding:

“Over six months, OXSIGHT tested Onyx with 125 people who were either legally blind or partially sighted. Most of the trialists had some form of central vision loss. Approximately 80% of people who tried Onyx were able to read text better. In most cases, participants could read three to four lines higher on a letter chart, and approximately 20% of people who could not read at all, could now read comfortably. In addition, trialists improved face perception and object descriptions.”

The Onyx is a compromise between cost, size, and image quality. It offers the user a convenient and compact device that performs variable magnification up to x8. The strength of this device is in general central vision enhancement, like viewing TV and faces rather than for text viewing. No patient testing was carried out as part of this review, but the clarity and magnification will render the device best suited to those with mild to moderate central vision loss. The simplicity of using the device to quickly gain a magnification and brightness boost stands out as its key selling point.

OXSIGHT (www.oxsightglobal.com), the company behind Onyx, is a spin-off company from visual impairment researchers at Oxford University. OXSIGHT have made similar products in the past and currently also produce the OXSIGHT Crystal smart glasses for those with peripheral vision loss.

The unit I tested was provided by Sight and Sound (www.sightandsound.co.uk), a key UK retailer of devices to support those with visual impairment. After testing, the device was returned.“The main purpose of this device is to magnify and present the view to the user”