This issue we’re covering the recently updated EyeLogbook (www.eyelogbook.co.uk), the Royal College of Ophthalmologist’s (RCO) online surgical logbook. Back in March 2016 a fully re-designed version of the site was released. Not only does the new version bring a beautifully designed and responsive interface, there are also a number of new and very useful features not previously available. 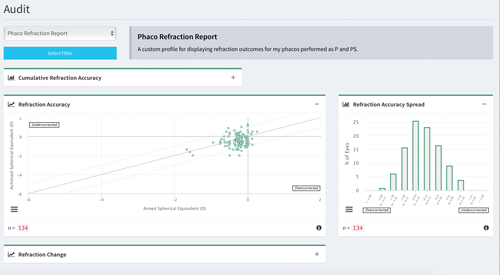 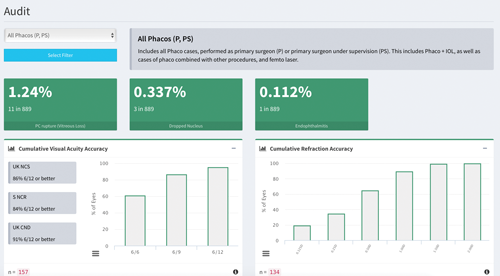 For those unfamiliar, EyeLogbook (ELB) is the surgical logbook provided by the RCO. It has been around for nearly seven years and replaced the old Excel spreadsheet and pivot-tables. Although ELB can be used to record all types of ophthalmic surgery, it is particularly good at cataract surgery and auditable outcomes. All trainee ophthalmologists in the UK are expected to use the site to record the operations they perform. The site is also freely available to other ophthalmologists if they are a member of the RCO, including international members. For non-training grade ophthalmologists there are several possible choices for surgical activity recording, depending on the facilities available at their places of work. ELB certainly has an important place in the units without MediSoft or OpenEyes (which also provide rich surgical logging facilities). Even in units with such software, ELB now has some new features which may make it the preferred option, especially if working across multiple work places.

Here are some of the new and key features that the site offers:

EyeLogbook continues to allow multiple operations to be entered at once, allowing quick and easy data entry for repetitive lists such as cataract or intravitreal injections. An additional option allows intraoperative and outcome data (e.g. complications, visual acuity, refraction) to be added at the same time as entering a single case, rather than as an additional later step, which was necessary in the previous version.

The new version of the site offers dramatically improved data analysis. The audit section for cataract surgery includes a clear interface and great graphing features of the visual acuity and refractive outcomes. Figures 1 and 2 are screenshots of the outcome graphs.

The feature described as ‘Custom Profiles’ on the site provides a straightforward way to view a specific subset of your cases. These might be the ones with complications, the ones in a particular date range or those of a particular operation type or types.

ELB now has the option to log IOPs at certain post-op points (1/52, 1/12, 3/12 etc.) In time this looks like it will evolve into a very useful tool to audit glaucoma surgery for revalidation and other purposes. Other subspecialty data fields are planned for later updates.

This one new feature alone makes the new version of ELB noteworthy. Called ‘External Data Passes’ on the site, this feature allows printing of letters that patients can take to their optometrist after cataract surgery. The code on the letter allows the optometrist to easily add post-op visual acuity and refractive outcome data into the surgeon’s logbook. Clinicians are notified by email when data has been received, allowing the surgeon to check the data validity before allowing it to be merged into their outcome results. This very useful feature should allow much easier collection of postoperative data for cataract surgery.

This newly updated site continues to support the ELB iPhone app, bringing convenient access to the logbook from iPhone and iPads. As before, the app requires a paid subscription of £10/year.

Assuming you are online, the mobile website is also excellent. All of the main logbook features are made available to mobile devices. Like the desktop interface, the mobile version is very well designed and uses a modern sliding side menu.

Visual acuity units of your choice

The upgraded version also supports the use of the common methods of measuring VA, including Snellen (metres and feet), LogMAR, decimal and ETDRS. Different VA units can be mixed, so a surgeon is not limited to just one unit.

The use of surgical simulators is becoming commonplace for trainee ophthalmologists. Procedures done via simulation can now be accurately recorded in the logbook to aid the documentation of the experience gained.

ELB has the look and feel of a professionally developed web application with a feature set to match. It may then come as a surprise to learn the site was actually designed and created by an ophthalmology registrar. Andy Simpson is an ST6 trainee based in London and he alone brought the logbook and the current changes into being. The project started in 2008, initially as Andy’s own surgical logbook. Interest from colleagues, and subsequently the RCO, resulted in the system being embraced as the official logbook for the College in 2010. Although I’ve been using ELB for several years, this new update provided an opportunity to showcase the website here. I would encourage any UK ophthalmic surgeon who hasn’t done so, to take a look at EyeLogbook themselves as it’s well worth your time.