What not to miss in neuro-ophthalmology Part 2

As mentioned previously there are several conditions in neuro-ophthalmology that should not be missed by the general ophthalmologist as well as ophthalmology trainees. We discussed in the first part some of these conditions including third cranial nerve palsies, giant cell arteritis, brain tumours and cerebrovascular accidents (CVAs). In the following article we will discuss some more interesting cases.

A 32-year-old female seen by colleagues in a nearby district general hospital (DGH). She was referred by her optician to the local emergency clinic for suspected optic nerve swelling. She saw her optician as she was complaining of blurred vision as well as headaches. When she was seen locally she was diagnosed with bilateral optic nerve swelling and admitted for further investigations. She had reduced visual acuity at 6/60 in her right eye and 6/36 in her left eye. Fundus examination showed grade V optic nerve swelling bilaterally. She had a normal CT and CT venogram, however, following several attempts lumbar puncture (LP) could not be done.

The patient was told she would be transferred to the neurology centre in Manchester to try the LP again. These events happened in the period leading to Christmas of last year and the patient was very keen on attending the festive period with her family so she only agreed to be transferred after the holidays. She wanted to be discharged and the local neurology team agreed. Fortunately, the local ophthalmology team saw the grave danger to her vision and referred her to Manchester Royal Eye Hospital for a second opinion. She was seen there the next day but by then her vision was hand motion (HM) in the right eye and 6/60 in her left. She also developed a right VI cranial nerve palsy as well as a partial VII. Her optic nerve was massively swollen.

We managed to convince her to be transferred directly for an LP under the care of neurology, this was successful and she had a repeated LP the next day then had an urgent ventriculoperitoneal (VP) shunt inserted. On follow-up her optic nerve swelling was improving, her visual function had improved in her left eye but remained poor in her right eye, and her VI and VII nerves recovered as well.

Comment: Fulminant idiopathic intracranial hypertension (fIIH): IIH is a common condition in the young overweight female population. There are well known criteria for diagnosis of IIH, including normal neuro-imaging, normal neurology examination, raised pressure on LP and papilloedema. In the majority of cases, IIH poses a small risk to visual functions, this usually depends on the degree of the nerve swelling and usually responds well to medical treatment (acetazolamide); however, in a small minority, the degree of swelling and the speed of progress is severe enough to cause permanent damage to the optic nerve functions. It is very important to identify and treat these patients swiftly in order to protect their visual functions. Lumbar puncture could be used as a temporising measure while waiting for shunting as there is limited value in serial lumber punctures as a treatment option.

A 52-year-old male was referred to our eye emergency clinic for assessment of visual functions from the local neurology unit. He was diagnosed with IIH following referral to them by the patient’s GP as he was complaining of headaches. He had a plain head CT scan which was normal and a lumbar puncture which showed raised intracranial pressure. Upon assessment in the eye clinic he was noted to have grade four optic disc swelling in both eyes. However, he did not fit into the IIH phenotype as he was not overweight, no risk factors (medical, medications, sleep apnoea, etc.) Moreover, the patient was male. IIH is much more common in females compared to males. This prompted a request for urgent CT venogram and this showed extensive cranial venous thrombosis.

Comment: IIH is an unlikely diagnosis in men. It should be treated with suspicion and every effort should be made to rule out other possibilities. Of the common causes of raised intracranial pressure, venous sinus thrombosis (CVST) is a dangerous one to miss. It is important to perform CT venogram in all suspicious cases if not all cases of raised intracranial pressure. Most patients will need lifelong anticoagulation as well as treatment for the raised pressure such as acetazolamide.

A young 19-year-old patient presented to the emergency eye clinic with sudden onset seemingly bilateral reduction of vision. He had a vision of around 6/60 in both eyes complaining of central blur of vision. Ocular examination was unremarkable with normal looking optic nerves and maculae (Figure 1) and no relative afferent pupillary defect (RAPD). The on-call team suspected functional visual loss as the patient has mental health issues and had upcoming exams. He was asking for a letter to his college to postpone his exams and the suspicion of functional loss was increased as he managed to have some stereopsis on orthoptic assessment. 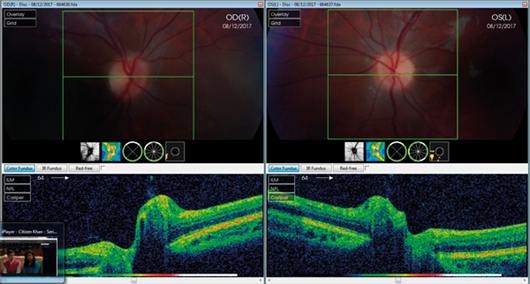 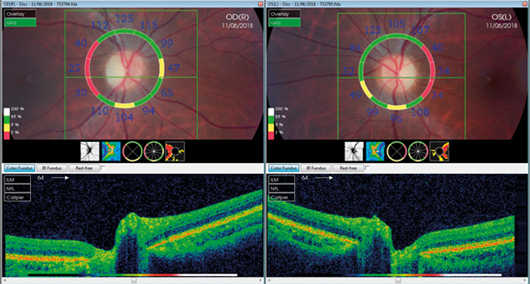 As per local protocol, he had neuro-imaging in the form of a brain MRI scan, which was normal; he also had normal blood tests, ruling out vasculitic and infectious causes of optic neuropathy. Normal vitamin levels also were noted and this kept the suspected functional visual loss high on the agenda; however, on the last clinical visit, it was noted that he was developing temporal optic disc pallor with nerve fibre layer (NFL) loss (Figure 2) and an interesting central scotoma on Goldmann field testing. Although the patient tested negative for the three common mutations of Leber’s hereditary optic neuropathy (LHON), given the development of optic disc pallor, his mitochondrial DNA was further tested for all other known mutations linked to LHON and showed positive results for a rare mutation.

Comment: Functional visual loss is a diagnosis of exclusion. All necessary tests should be done to rule out subtle optic neuropathies or maculopathies as well as posterior visual pathway pathologies. It is important to rule out any structural abnormalities by performing necessary imaging such as brain MRI and optic disc and macular OCT scans or angiography. It is also important to perform functional assessments such as electrodiagnostics and orthoptic assessments. When in doubt it might be useful to monitor the patient for a while to check for stability rather than dismiss the patient’s concern prematurely. In our case, signs of LHON were only noted a few weeks after initial presentation and would have been missed if he was discharged prematurely.

It is sometimes difficult to differentiate subtle optic neuropathies from maculopathies and from functional visual loss. In a similar case a female patient was diagnosed with optic neuritis as she presented to the emergency clinic with mildly reduced vision and colour vision but no obvious signs. However, a few days later she developed multiple white lesions in her retina and was diagnosed with multiple evanescent white dot syndrome (MEWDS).

Neuro-ophthalmology is a complex but exciting subspecialty. It is important to be aware of cases that need urgent attention and be able to identify red flags and not miss such cases.

Part 1 of this topic is available here.