Are we short-sighted about myopia?
By Dr Janis B Orr and Prof James SW Wolffsohn

Worldwide prevalence of myopia has increased rapidly in recent years and has now reached epidemic levels, particularly in South-East Asia where prevalence is around 80% [1-4]. Myopia prevalence is also increasing in the United States and Europe where it is in the region of 20-40% [5-7]. Furthermore, Holden and colleagues predicted that by 2050 around 50% of the world population will be myopic; 10% of whom will be over 5.00D [8].

Myopia is perceived by many as a minor refractive problem which can easily be mitigated using corrective lenses. However, having myopia significantly increases an individual’s lifetime risk of developing sight-threatening ocular conditions such as retinal detachment, myopic maculopathy, cataract and glaucoma. Although the lifetime risk of ocular complications increases significantly with the level of myopia, the arbitrary cut-off of 5.00D or 6.00D, which is often used to differentiate pathological from physiological myopia, has been challenged in Flitcroft’s landmark review [9]. He suggested that any myopia imposes a greater lifetime risk of ocular pathology compared to the emmetropic eye. Myopia in the ‘physiological range’ was shown to represent a lifetime risk factor for ocular disease that is comparable with the risk of hypertension leading to cardiovascular disease.

The lifetime risks of myopia leading to glaucoma or cataract are comparable with the risks of stroke from smoking over 20 cigarettes a day [9]. In addition, the review also concluded that lifetime risk of myopia leading to retinal detachment or myopic maculopathy far exceeds that of any identified population risk factor for cardiovascular disease.

Myopia, therefore, places financial pressure on the National Health Service (NHS) and other healthcare providers [10,11], and has been shown to reduce an individual’s quality of life for a combination of psychological, cosmetic, practical and financial reasons [12]. It is imperative, from a public health perspective, that we fully understand the mechanism underlying myopia development and progression and intervene accordingly.

Mechanism behind myopia development and progression

In the myopic eye, the optical power and axial length do not match and distant light is focused in front of the retina, leading to blurred distance vision. It is now accepted that myopia predominantly results from the excessive axial growth of the eye [13,14]; however, despite the large body of research dedicated to understanding the mechanisms responsible for excessive eye growth, the reason for this is not yet fully understood.

Historically, it was accepted that myopia is an unavoidable condition which is pre-determined by an individual’s genetics. Indeed, some loci have been identified [15-18]. It is also known, from several studies, that the odds of a child becoming myopic are around five to eight times greater in children with two myopic parents than in children with only one or no myopic parents [19-21]. Studies on identical twins have suggested that heritability is more important than environmental factors in determining refractive error [22,23]. However, the recent surge in worldwide myopia prevalence suggests that genetics are only part of the story.

It is now accepted that a number of environmental and lifestyle factors also play a role in myopia onset and progression [24,25]. Animal work has shown that the eye growth is an active process and that the eye grows in response to certain lighting conditions [26-28], form deprivation [29-31] and hyperopic defocus (or blur); and stops growing in response to myopic blur [32-34].

Compared to emmetropes, myopes demonstrate an insufficient and inaccurate accommodative response to blur [35,36] and have elevated anterior chamber (AC)/A ratios [37,38], both of which increase exposure to hyperopic defocus. Because myopia typically develops during school years [24,39], its development has been attributed to the hyperopic defocus which results from extensive close work. The likelihood of an individual becoming myopic increases with the number of years spent in education and the level of educational achievement reached [40-42].

It has been proposed that sunlight is protective against myopia [43-45]. Research has shown that children who become myopic tend to spend significantly less time performing outdoor activities than children without myopia [43,45,46]. It is believed that this could be due to a component of the light itself, or the reduction of myopia-inducing blur which occurs when viewing distant objects [47].

Perhaps the most compelling evidence for the mechanism behind myopia development comes from recent animal work which has shown that the eye grows axially in response to hyperopic blur in the periphery. Results from human studies have also suggested that relative peripheral hyperopia exists in progressing myopes [48,49] however, other studies have disputed this [50,51].

Furthermore, it appears that hyperopia in childhood is a protective factor. Children with low hyperopia (less than 0.75D) or emmetropia at six years of age are likely to become myopic [52,53].

Figure 1: Image shell created when a myopic refractive error is corrected: a) with a conventional single vision lens; b) with an ‘ideal’ lens which accounts for the prolate shape of the eye / relative peripheral hyperopia. Adapted from Smith (2011) [54].

In the absence of a single causative factor, several behavioural, optical and pharmaceutical intervention strategies, with the aim of slowing myopia progression, have been proposed.

Increasing working distance when performing near activities has been proposed to reduce the exposure to hyperopic defocus by reducing the accommodative demand [56,57].

As children who develop myopia tend to spend significantly less time outdoors than those who do not [43-45], it has been suggested that spending upwards of 10-14 hours per week outdoors could be protective against myopia [44-46].

Undercorrection refers to the deliberate reduction of the power of the spectacle lenses prescribed to people at risk of becoming more myopic. It had been hypothesised that the resultant hyperopic blur would prevent eye growth. Although still practised in some countries [55], this strategy has been shown to be ineffective [58-60], with some research showing that it actually accelerates eye growth [58,59]. It also reduces the visual acuity of the child, which could be detrimental to their education and safety.

Bifocal and progressive addition (PAL) spectacle lenses reduce the level of hyperopic blur myopic people are exposed to when performing close work or from their prolate eye shape / relative peripheral hyperopia, which is thought to drive eye growth. Research has shown that these lenses offer a modest reduction in myopia progression [60-62].

Rigid gas permeable (RGP) contact lenses are known to provide the wearer with a sharper image than soft contact lenses. It was suggested that this clear image would prevent the eye from growing excessively. However, research has shown that these lenses are ineffective for myopia control [58,59].

Orthokeratology (reverse geometry rigid gas permeable) contact lenses temporarily reduce central corneal power so that light focuses on the retina, leading to clear central vision [63]. These lenses are generally worn overnight so that the wearer is free of spectacles or contact lenses during waking hours. This strategy offers a significant reduction in myopia progression [64-69], which is thought to be due to the relative myopic defocus brought about by the mid-peripheral thickening of the cornea [70-72] or the increase in positive spherical aberration, being created by the reverse geometry lenses.

Multifocal (centre-distance), dual-focus and myopia control (novel lens designs specifically designed for myopia management) soft contact lenses reduce the level of hyperopic defocus that myopic individuals are exposed to. Research has shown that these multifocal contact lenses are significantly more effective than multifocal spectacles [73-75], presumably because the correct portion of the lens is consistently optimally aligned.

Atropine has been known to prevent myopia development / progression since 1874 [76]. However, the mechanism by which it does this remains inconclusive [77]. Relatively high doses of atropine (1.0% / 0.5%) are effective at preventing eye growth [78-80], but are known to cause accelerated eye growth (rebound) following cessation of treatment [81,82] and result in unwanted side-effects such as blurred near vision and light sensitivity [79].

Recent research has shown that low dose atropine (0.01%) is also effective at preventing eye growth with significantly fewer side-effects and reduced rebound effects [79,80]. Atropine 0.01% is not currently commercially available in the UK, but as research advances in this field, it may become available to suitably qualified (Independent Prescribing) optometrists in future.

“In view of the negative impact myopia can have, it is important that potential intervention is discussed with all myopic individuals.”

Pirenzepine gel was introduced as a possible alternative to atropine [83]. It was believed that it could have a similar anti-myopia effect with fewer side-effects [84]. However, it is not licensed for ocular use, requires two doses / day (compared to one dose / day for atropine) [85], and it is less effective than low-dose atropine (which also causes minimal side-effects) [80,86-88].

A recent meta-analysis evaluated the relative effectiveness of all myopia intervention strategies [92]. The most effective were atropine and pirenzepine. However, current available concentrations are not suitable for myopia control (in terms of rebound and side-effects) and low-dose atropine (0.01%) is not commercially available. The next most effective intervention strategies were orthokeratology therapy and soft multifocal contact lenses (centre-distance / dual-focus). These latter strategies are currently available to practitioners.

Unfortunately, no official guidelines on myopia management exist for practitioners although a global consensus is due to be published in 2018.

In view of the negative impact myopia can have, particularly when it reaches higher levels, it is important that potential intervention is discussed with all myopic individuals or those at risk of becoming myopic (Table 1). 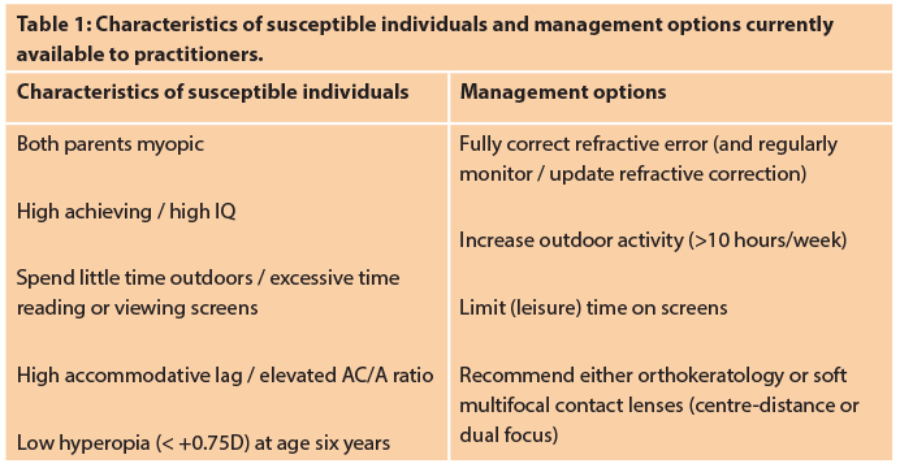 The treatment of myopia is constantly evolving and further research will be needed to define the place of each of these interventions in managing myopia. 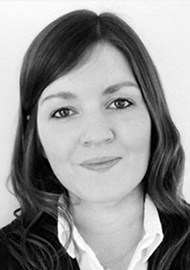 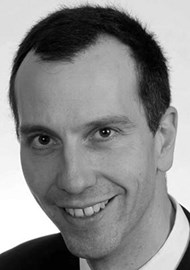