Baxter and colleagues at Queen’s Medical Centre, Nottingham, assessed patient preferences in the delivery of treatment for neovascular AMD [1]. For patients undergoing active treatment for wet AMD in the study, the most important factor was having good vision, followed by a one-stop pathway service and less frequent follow-up.

Inger Westborg reported analysis of data from the Swedish Macula Register on the treatment received by 3,912 treatment-naïve neovascular AMD patients commencing treatment between January 2011 and October 2012 treated with anti-vascular endothelial growth factor (anti-VEGF) therapy for a two-year follow-up study period [2]. The purpose was to identify vision outcomes for patients with neovascular AMD treated with intravitreal anti-VEGF therapy in daily clinical practice, and determine the risk of having poor vision (VA<60 letters) after one and two years.

The median age of this series was 79 years and more than 60% were women. Approximately 40% of patients experienced neovascular AMD symptoms for less than two months prior to their first clinic visit and around 57% of patients had baseline VA less than 60 letters.

The analysis showed that treatment outcome depends on VA at first visit and that patients aged more than 79 years have a higher risk of VA less than 60 letters on anti-VEGF treatment compared with younger patients. Eyes with lower starting best corrected visual acuity (BCVA) may register higher overall visual gains from baseline but may not reach the levels of vision of those who start treatment with higher BCVA scores.

NHS Grampian AMD service covers a population of 600,000, and there has been a 10-fold increase in appointments / injections since the introduction of anti-VEGF pharmacotherapy for neovascular AMD in 2006. A two-stop service was utilised until 2012. Clinicians at Aberdeen Royal Infirmary, Scotland, evaluated a one-stop AMD service, which was established in 2013. The new service was designed to enable appropriate, timely and patient-centred care to safeguard vision in the elderly, vulnerable population to prevent blindness and reduce social burden. It involved multidisciplinary team working with doctors, nurses, optometrists, photographers and administrative personnel (Figure 1). 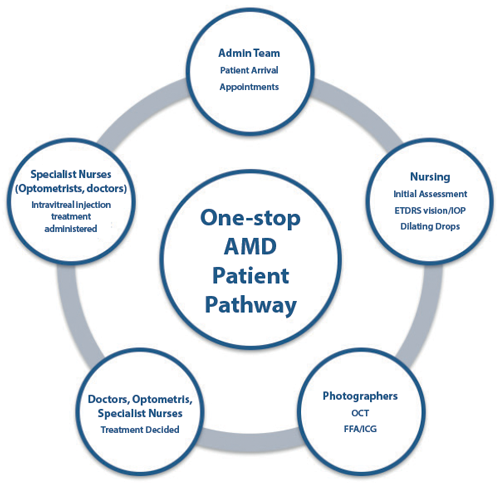 Cynthia Santiago discussed the benefits of a one-stop patient pathway for neovascular AMD and results of a clinical audit of visual outcomes at two years’ follow up [3]. This entailed a prospective, non-randomised review of consecutive, treatment-naïve neovascular AMD eyes (n=53 eyes of 49 patients) treated with intravitreal anti-VEGF therapy between July 2013 and February 2014. Treatment involved aflibercept fixed dosing for the first year of treatment followed by an individualised approach to dosing frequency and timing in year two. A mean of eight injections were given in year one, followed by a mean of four injections in year two.

Mean change in BCVA from baseline at month 12 was +5.8 ETDRS letters (n=42) and at month 24 +7.5 ETDRS letters (n=30). Vision stabilisation (loss of <15 letters from baseline) at 24 months’ follow-up was observed in 96.7% of eyes (n=30), and 26.7% of eyes gained 15 letters or more from baseline. A patient satisfaction survey showed that in this series of elderly AMD patients, the vast majority preferred a one-stop treatment service (98%) and rated the service provided as good. Seventy-five per cent were seen within two hours, a good performance for a tertiary centre handling a large patient population. Interestingly, 92% of patients also felt that they were involved in the decision-making about their care, 47% rating the service as excellent. Assessment of long-term real world outcomes in this centre shows favourable visual acuity gains. Moreover, fewer visits appear to be beneficial for both patients and NHS AMD clinic centres.

Central retinal thickness is commonly used as a biomarker for guiding retreatment decisions in clinical trials and routine practice. Research findings suggest that fluid localisation in different compartments offers superior prognostic value over conventional anatomic biomarkers [4]. Intraretinal cystoid (IRC) fluid has a negative impact on visual acuity and is considered as degenerative when persisting through the initial therapeutic treatment phase. Subretinal fluid is associated with superior visual benefit and a lower rate of progression towards geographic atrophy.

In addition to the clinical focus on visual and ocular imaging outcomes, it is also important to consider the general well-being of patients with retinal diseases. A recent report from the United States National Academies of Sciences underscores priorities in managing the rising challenge of chronic vision impairment [7]. The authors comment that due to its prevalence and impact on other health domains, chronic vision impairment should not only receive greater attention as a chronic condition in its own right, but must be part of all dialogues and action plans geared toward maximising health and well-being in an ageing society. The authors note that chronic vision impairment frequently co-occurs with, and may be a risk factor for, many comorbid conditions including other sensory impairments, depression, anxiety, and cognitive impairment.

Research undertaken by clinicians at Manchester Royal Eye Hospital evaluated the psychological well-being of patients undergoing treatment for wet AMD with intravitreal anti-VEGF injections [8]. It is known that anti-VEGF injections are associated with stress in patients and, even prior to the era of intravitreal injections, that AMD and sight loss have a definitive link to depression and anxiety. Intravitreal injections can be stressful, especially early on in the course of therapy. This study aimed to capture a snapshot by quantifying levels of anxiety and depression in patients with AMD receiving repeated treatment with anti-VEGF injections, to detail opinions and underlying experiences of patients relating to this treatment. It was designed as a pilot observational cross-sectional mixed methods research, with both quantitative (standardised psychological instruments) and qualitative (experiences using a structured survey approach) strands. If there was a significant level of anxiety, to try and get more information on the detail of the causes and the underlying experiences of patients.

Analysis was performed by a clinical psychologist not involved in the management of AMD patients. Using a well-validated questionnaire and a Hospital Anxiety and Depression Scale, symptoms of anxiety and symptoms of clinical depression were noted in 17.3% and 12% of study subjects (n=150), respectively. Notably, these levels are significantly higher than rates of anxiety and depression in the general population. Over half of patients reported anxiety over receiving intravitreal injections. Anxiety exclusively associated with receiving anti-VEGF injection treatment related to fear of a needle in the eye, fear of not knowing what damage a needle might cause, and fears around never knowing when treatments might stop. Fear of pain was lower down in the order of causes of stress. Anxiety persisted through treatment and underscores the need for support and education, recognising the importance of the relationship with the treating doctor / injector.

The study reveals there is a significant and high level of clinical anxiety and depression among patients with wet AMD, and that this may persist beyond the first year of treatment. Anxiety and depression originate from many sources, some of which practitioners may well be able to help tackle. For example, by having the same doctor or injector perform intravitreal treatments. There may be a role in AMD clinics for detecting those patients who are suffering clinical levels of anxiety and depression. A short questionnaire might be able to screen these patients before they are seen by the treating doctor, and allow clinicians to give patients further support and education where needed in order to treat better, but also perhaps to prevent anxiety levels from building up in other patients.

Data from the Depression in Visual Impairment Trial (DEPVIT), a multicentre, randomised controlled trial that screened >1000 consecutive attendees at low vision rehabilitation centres in Britain, show a prevalence of clinically significant depressive symptoms in 43% of those seeking help for sight loss. Of those screened positive for significant depressive symptoms, 74.8% were not being treated for their depression [9]. Results show people with visual impairment need more help. Nollet et al. suggest a practical step forward would be to introduce depression screening, for example using assessment questionnaires such as the Geriatric Depression Scale-short form (GDS-15) or the Patient Health Questionnaire (9-item screen for depression) (PHQ-9), and referral for treatment where appropriate [6].

Locus of control orientation may be an important target for intervention

An observational study conducted by the Unit of Ophthalmology and the Clinical and Health Psychology Service at the San Raffaele Scientific Institute in Milan, Italy, assessed quality of life, depression and anxiety in AMD patients [11]. The study sample involved 74 patients with neovascular AMD treated with intravitreal anti-VEGF injection therapy and with VA in the best eye <20/40. Levels of anxiety and depression were found to be related to a lower quality of life. Higher levels of external locus of control were associated with higher scores of depression and anxiety symptoms measured using a battery of validated psychological tests. The results confirm that neovascular AMD has a significant impact on the quality of life of patients, and is linked to the presence of anxiety and depression patterns. It was noted that the external locus of control is linked to a high level of anxiety and depression and to a lower quality of life, while an internal locus of control is related to better social support.

Kempen et al. found that older persons with vision loss generally reported poor levels of functioning with respect to activities of daily living, symptoms of depression and feelings of anxiety as compared to the general older population, as well as compared to older patients with different chronic conditions [12]. A cross-sectional study by Rees and co-workers found that distress related to vision loss is more strongly correlated with depression than other key risk factors such as poor physical health or negative life events [13]. Results of a randomised clinical trial found that an integrated mental health and low vision intervention significantly reduced rates of depression symptoms and led to better functional outcomes relative to standard out-patient low vision rehabilitation in patients with age-related macular degeneration (AMD) [14].