The structure function relationship in glaucoma
By Prof David Henson

Chronic open angle glaucoma (COAG) is the second most common cause of blindness worldwide. It is diagnosed on the basis of three clinical signs, raised intraocular pressure (IOP), visual field (VF) defects and structural changes to the optic nerve head (ONH) and nerve fibre layer (NFL). Most definitions of glaucoma are based on corresponding structural and functional changes or evidence of progression in either measure, with raised IOP being viewed as a risk factor rather than part of the definition.

The term structure function relationship refers to the temporal relationship between changes in function, normally represented, but not exclusively, by the visual field, and changes in structure detected with various imaging modalities (ophthalmoscopy, scanning laser tomography (SLT) and optical coherence tomography (OCT)). Clinical interest in the structure function relationship is primarily focused on two questions. First, do detectable changes occur first in functional or structural measures? Second, for the monitoring of diagnosed cases is it better to use functional or structural measures? As we will see in the following sections, the relationship between structure and function is complex, as are the answers to these two questions.

Understandably, there is a great deal of interest in establishing whether structural changes occur before, in synchrony with or after functional loss. If we can establish which occurs first then we can focus on this method when trying to detect the earliest signs of COAG. There are a large number of cross-sectional and some longitudinal studies that have addressed this question. A major problem with the cross-sectional approach is selecting a database that is not biased in favour of structural or functional changes. Unfortunately, this is not as easy as it might first appear. The low incidence of COAG precludes the use of a sample taken from the general population on the basis of costs. To obtain a sufficient sample would require a study of many thousands of cases.

“There is a great deal of interest in establishing whether structural changes occur before, in synchrony with or after functional loss.”

Most studies, therefore, select an ‘at risk’ population such as one in which the IOP is high. The problem with this approach is that the pre-selection process is unlikely to be free from bias, i.e. at some stage of the selection process the patient will have undergone a visual field test and an examination of their ONH and the results from these assessments would have contributed to their selection. While researchers of such populations may very well use methods that are bias free (not based on structural or functional loss) they cannot exclude the likelihood that their sample is biased. Longitudinal studies do not suffer from this problem, they look for change in function and / or structure with time. In the rest of this paper I will concentrate on the findings from longitudinal studies.

An important factor in any study of the structure function relationship in COAG, is the cut-off criteria. At what point do you define a VF or structural measure as being glaucomatous? The accepted view is that they should be set to an equal level of specificity, i.e. the same number of false positives. This approach takes into account differences in the variability between structural and functional measures. More variable measures will require larger changes to become significant.

Figure 1: The discriminatory power of visual fields (VF) and scanning laser tomography (HRT) of the optic nerve head using both loose and tight cut off criteria for progression from a database of cases with ocular hypertension using a mean follow-up time of six years [1].

Strouthidis et al. [1] undertook a well-designed longitudinal study of eyes with high IOP, plus some controls. They were interested in whether progression from OHT to glaucoma could be detected first with a visual field test (24-2 threshold) or SLT of the ONH (Heidelberg Retinal Tomography). They defined progression on the basis of the rate of change of either the VF or HRT and used two cut off criteria which we will call loose and tight. With the loose criteria more eyes will be diagnosed as progressing. Their results are presented in Figure 1. When data are equated for specificity, the sensitivity of VF and SLT are roughly equivalent - slightly better for structural measures with the use of tight criteria. However, the surprising result is that they rarely agree. For the loose criteria, 77% progressed in only one measure. The number for the tight criteria was even higher at 87%. The conclusions from this study are that high diagnostic accuracy requires both structural and functional measures.

“The greatest risk to future visual impairment occurs when the patient first presents with advanced loss.”

Imaging methods have undergone a lot of development since the work of Strouthidis. Today, OCT and, in particular, spectral domain OCT (SD-OCT) give improved resolution, reduced noise and a capacity to compliment ONH measures with thickness measures of the NFL / ganglion cells complex (GCC) both around the ONH and the macular. Linked to these improvements are improved analytical routines that take into account the positioning of the fovea and use the more exact Bruch’s membrane opening as an anatomical marker of the optic nerve head, rather than the observed margin of the disc seen with an ophthalmoscope. 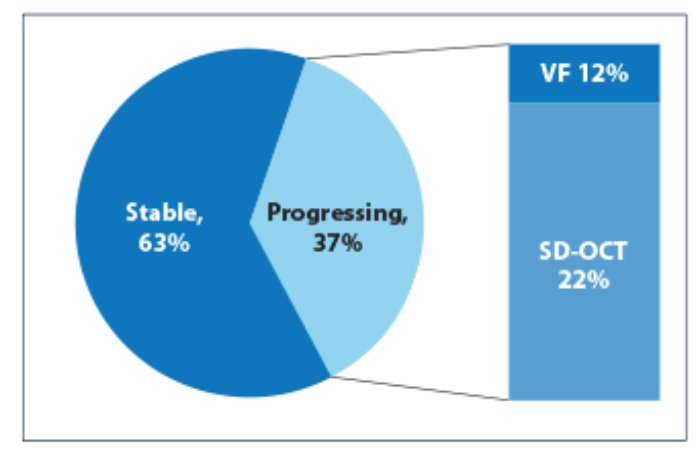 A recent paper by Banegas [2] used longitudinal SD-OCT and VF (24-2 mean deviation and visual field index) data to look at progression in a group of suspect and diagnosed glaucoma cases. Looking at just the suspect group with ocular hypertension (69 eyes) we can see from Figure 2 that far more progressed on the basis of SD-OCT than VFs. The paper did not give data on the number who progressed on both criteria but makes a statement that the majority of cases progressed on a single parameter. Table 1: Rates of progression and time to visual impairment for eyes with different stages of glaucoma, data collected from treated patients being managed at Manchester Royal Eye Hospital.

There is an understandable drive to detect a disease like COAG as early as possible. This gives the clinician the widest possible management options. However, data from studies looking at the rate of VF loss in treated cases versus baseline extent of loss, report that the risk of future visual impairment is very low in cases where VF loss is detected early [3,4]. The greatest risk to future visual impairment occurs when the patient first presents with advanced loss. Table 1 gives the findings from an unpublished study undertaken at Manchester Royal Eye Hospital. The data uses the Glaucoma Staging System 2 (GSS2) [5] to classify the extent of visual field loss on the basis of the 2 global parameters (mean deviation (MD) and pattern standard deviation). Looking at cases where there is early functional loss (GSS2 stages 1 and 2) the projected years to impairment (MD<-20dB) are 428 and 104 years, i.e. treated eyes with early VF loss are highly unlikely to reach the impairment level of -20dB within a patient’s projected lifetime.

The results from studies that have looked at rates of progression in treated eyes bring into question the best time to treat a patient with progressive loss detected by either structural or functional measures. Given that we can detect progressive loss earlier, do we need to treat earlier, especially when consideration is given to some of the negative quality of life effects that occur when a diagnosis is made and treatment initiated? This is not to say that we should not strive to improve both structural and functional measures. Improvements can be used to set more specific diagnostic criteria and reduce the number of false positives (eyes without COAG being falsely diagnosed and treated).

“To ensure high diagnostic performance and sensitivity to progressive loss, management protocols need to include both structural and functional measures.” 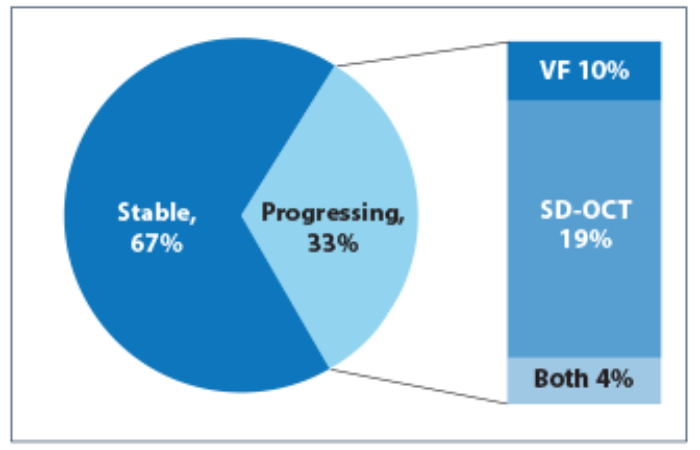 While recent studies on the structure function relationship have focused on the latest developments in structural measures (e.g. SD-OCT), they have continued to use functional measures that have undergone little radical change for the last 20 years. The 24-2 test pattern is known to under sample the central 10 degrees [6] and MD does not currently take into account factors such as the difference between the two eyes / hemifields [7]. Adopting improved VF methods and analyses would offset some of the imbalance between structural and functional measures seen in Figures 2 and 3. However, importantly, current VF measures still provide detailed information on the size and location of functional loss and its likely impact on patients’ quality of life and continue to complement the data derived from structural techniques.

Once a case of COAG is diagnosed it needs long-term monitoring to establish both the rate and nature of loss. When comparing the results from SD-OCT with VF indices (24-2 test pattern and MD) in early glaucoma (see Figure 2), progression is more often seen with SD-OCT measures. However, several research groups have suggested the reverse is true in more advanced disease. Abe et al. [8] investigated this using longitudinal data and regression analysis on a population of diagnosed glaucoma cases ranging from early loss through to advanced loss. They used the global measures, mean RNFL thickness and mean sensitivity to establish progression. Overall, the number of cases detected by their structural measure was greater than that for function (see Figure 3) and, again, the majority of cases of progression were detected by a single measure. However, as the baseline MD increased the proportion detected solely by VF increased. At a baseline measure of -10dB the proportion was equal for both tests and at more severe baseline values VF detected a higher proportion than structural measures. Their conclusion was that structural measures (SD-OCT) perform better for early loss, while functional measures (24-2, MD) perform better for more advanced loss.

The research reviewed in this paper, along with many other studies, emphasises the complex relationship that exists between structural and functional measures in COAG. The findings from recent studies show that during the early stages of glaucoma SD-OCT measures are more likely to detect progression than the widely used VF measures but that VF measures will still detect a significant number of cases undetected by structural measures. With advancing loss the situation reverses with VF measures more likely to detect progression than structural measures. Importantly, at all stages of loss there are many cases where progression is detected by just one method. To ensure high diagnostic performance and sensitivity to progressive loss, management protocols need to include both structural and functional measures.

Declaration of competing interests: The author is a consultant for Elektron Technology. 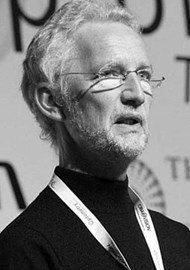