Neurodegenerative diseases are characterised by the chronic and progressive loss of neurons, which in turn results in loss of cognitive and physical functions. The World Health Organization has estimated that the disability-adjusted life years lost from neurological disease was about 92 million in 2005 and has projected that this will increase to 103 million by 2030. Unfortunately, no drugs are currently available to halt the progression of these disorders and all that can be offered in the clinic are symptomatic therapies.

Thus, the development of better therapies is needed. In this respect, the use of stem cells to repair damage to the central nervous system is one exciting avenue of research being explored. Stem cells are proliferating cells that have the capacity to self-renew as well as the potential to turn into different types of cells depending on their source. Therefore they could be used to regenerate healthy new cells to replace those lost in disease processes. As such, these cells hold great promise as regenerative therapies for neurodegenerative diseases.

Parkinson’s disease (PD) is characterised by the progressive and selective loss of nigral dopamine-producing neurons, and as such is amenable to stem cell therapy especially since patients respond so well to dopamine replacement pharmacologically.

Current treatments for PD include the drugs Levodopa (L-dopa), dopaminergic agonists and dopamine degrading enzyme inhibitors. However, over time these drugs become less effective as the disease progresses and generate-side effects such as dyskinesias, at which point the patients may be suitable for surgery, such as deep brain stimulation with implanted electrodes located typically in the subthalamic nucleus. All these treatments whilst helping symptomatically nevertheless have time-limited efficacy and do not slow down or reverse the damage to nerve cells in the brain and over time, the clinical features get worse despite treatment.

One alternative approach to replacing dopamine pharmacologically is to replace it with cellular implants – so called cell replacement therapies (CRT). The first clinical trials looking at this were performed in the 1980-90s using developing human midbrain tissue derived from aborted fetuses and grafted in the striatum of people with PD. These open-label studies gave promising results with sustained clinical improvements, although the results were somewhat inconsistent for reasons that were not that clear. Despite this uncertainty, two double-blind, placebo-controlled clinical trials were nevertheless undertaken in the US in the 1990s [1-3].

In contrast to the open label studies, these studies found that while the grafted dopaminergic neuroblasts could survive and re-innervate the striatum, they were without significant functional effects [4,5] and in addition some patients developed graft-induced dyskinesias as side-effects [6]. The reasons as to why these studies failed are still debated and may relate to patient selection, the end point chosen, the level of immunosuppression, as well as the composition of the tissue grafted and its distribution across the striatum.

Indeed a limited meta-analysis showed that younger patients or patients with less advanced disease benefited most from this transplantation treatment. Furthermore, recent follow-up studies of some PD patients who were grafted more than 15 to 18 years ago have revealed major long-term motor improvements – which in some cases have been associated with them being able to stop their dopaminergic medication [7]. These clinical improvements marry up with imaging data showing that dopaminergic innervation in the grafted brain returns to normal levels, although it takes some time for this to happen as the transplanted cells have to mature and grow into the host brain to innervate it normally [8].

These issues will be addressed in a small open label study of fetal hVm transplants to patients with early PD, which has just started with the first patients being grafted in the UK. However, even if the clinical trial will be successful, this approach with fetal transplants will never become a widespread therapy as tissue availability is limited along with ethical issues that surround the use of fetal tissue. Nevertheless, these fetal cell treatments have paved the way for newer stem cell based treatments to replace the missing dopamine (DA) neurons in people with PD. 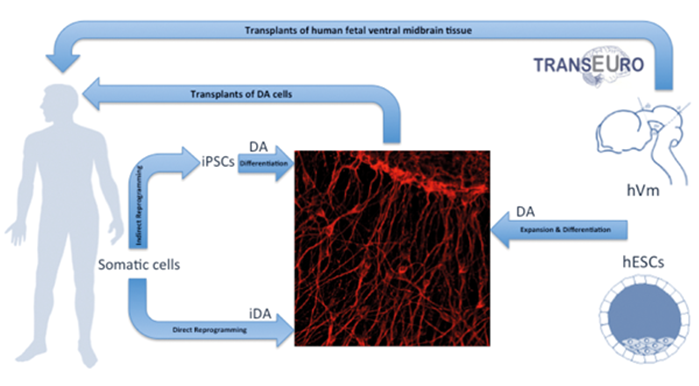 Human ESCs are pluripotent stem cells derived from the inner cell mass of blastocysts with a self-renewal capacity. DA producing neurons have now been made from both mouse and human embryonic stem cells, with the latter recently been shown to have similar effects as the human fetal dopamine cells in a rat model of PD [14,15]. However, the clinical use of hESCs still faces major hurdles. Their high capacity for self-renewal generates anxieties about them forming tumours – although with the newer differentiation protocols this seems not to be a problem. Furthermore as they are not derived from the patients there are also issues of their immunogenicity and graft rejection, which will need to be addressed [16]. Finally the origin of hESCs still raise ethical and political issues that may compromise their use for clinical therapy in some countries [17]. In this context, researchers are looking for other ways to generate ‘new neurons’.

The possibility to reprogramme differentiated somatic cells to pluripotent cells or iPSCs, using a cocktail of four transcription factors – Oct3/4, Sox2, Klf4, and c-Myc termed OSKM – has opened several new perspectives in CRT [18,19]. IPSCs can be induced to differentiate into many cell types including DA neurons. This has been successfully done in rat models of PD [20] as well as recently in a primate study of PD [21].

The iPSCs approach not only solves ethical issues by avoiding embryonic or fetal cells but also immunogenicity problems by using the patient’s own cells as the donor source. Although iPSCs cells are very promising as a source of transplantable neurons, there are still many limitations that make their translation to the clinic not straightforward. The first major issue relates to their generation using viral vectors to deliver the transcription factors, and which can lead to the insertion of genes into multiple different sites within the genome. This sometimes results in unwanted effects such as activation of resident cancer-related oncogenes or disruption of other genes and regulatory elements.

However, this issue is now being resolved using only ‘chemical cocktails’ or small molecules to reprogramme the adult somatic cells [22]. Another issue with the iPSCs is that they have the same proliferative capacity as hESCs and so can still potentially induce tumour formation and neural overgrowth after transplantation. Finally, it is still a challenge to get a high proportion of iPSCs to differentiate into authentic midbrain dopaminergic neurons and more studies are also needed to make sure the cells are safe and will not readily develop PD pathology given they are derived from the patients themselves.

Within the last few years, a considerable amount of work on the direct generation of neurons or induced neurons (iN) from somatic cells has been undertaken. This process involves inducing increased expression levels of particular reprogramming factors in fibroblasts, which enables the cell to trans-differentiate into a neuron without going through an iPSCs phase.

Several groups independently used neurogenic cocktails containing combinations of three neural-lineage-specific transcription factors (Ascl1, Brn2 and Myt1l), to directly convert fibroblasts to induced neurons capable of generating action potentials and forming functional synapses [23,24]. This direct reprogramming strategy, which avoids pluripotent cells, prevents the concerns around the proliferative capacity of hESCs and iPSCs. However, because the direct conversion does not involve a proliferative cell type the number of neurons that can be obtained is limited by the number of fibroblasts used as starting material for conversion – which is still very inefficient with the current protocols [24].

Particularly relevant to transplantation in PD, recent studies have demonstrated that it is possible to directly reprogramme human fibroblasts into induced dopaminergic neurons (iDA) by overexpressing dopamine neuronal lineage-specific factors. One approach to achieve this is to use the three neural lineage specific transcription factors (Ascl1, Brn2 and Myt1l) in addition to the expression of two transcription factors involved in dopaminergic neuronal differentiation (Lmx1a and FoxA2) [25]. Another approach identified a set of only three transcription factors (Nurr1, Mash1 and Lmx1a), which supported the generation of dopaminergic neurons directly from mouse and human fibroblasts [26]. Interestingly, these iDA cells exhibited properties such as dopamine release and spontaneous electrical activity similar to that seen in normal midbrain dopamine cells.

Despite these successes, it is still debated whether iN are truly functional neurons and whether they will perform as expected in the host tissue given their origin and the fact that they could potentially express PD susceptibility genes and thus acquire the pathology of the disease. As such, the use of iDA cells for clinical trials will require further investigation to determine whether they will be safe or might degenerate after grafting.

Stem cell research / therapy is one of the most exciting areas of 21st century science and has revolutionised the approaches and efforts towards the generation of new and effective therapies for neurological disorders. The promise of stem cell therapy in the central nervous system is to regenerate and reconstruct the original pathway to promote functional recovery. PD is the most amenable to CRT but much work still needs to be done before clinical trials can go ahead and be translated from the laboratory to the clinic. To this end, the lessons learned from previous cell-therapy trials in patients with PD will help to critically evaluate the outcomes of new clinical trials, and the support of new technological advances in stem cell research will speed up the translation of cell replacement therapies from bench to bedside.

Regardless of which stem cell source is used to ‘repair the brain’, it is essential that [a] they can be shown to form the authentic cells needed for repair (midbrain dopamine cells with PD, for example), they [b] can survive long-term in the adult brain and form connections to and from it and [c] all of this may take several years and as such functional benefits may take some time to become obvious.

The author would like to thank Roger A Barker for his helpful comments on a first draft of this manuscript. 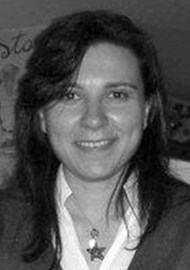