Gene and cell therapies offer the prospect of ground-breaking new avenues for the treatment of diseases, reflected in a renewed explosion of interest and investment in retinal gene therapy. Rod McNeil reports recent clinical trial readouts across a diverse range of investigational ocular gene and cell therapy candidates.

Gene therapy has definitely arrived. There are currently at least five different retinal gene therapy phase 3 trials active and many more planned, with more than 30 clinical sites with ~1167 patients enrolled in gene transfer clinical trials to date involving subretinal and intravitreal delivery. The majority of these studies use an adeno-associated virus (AAV) vector. 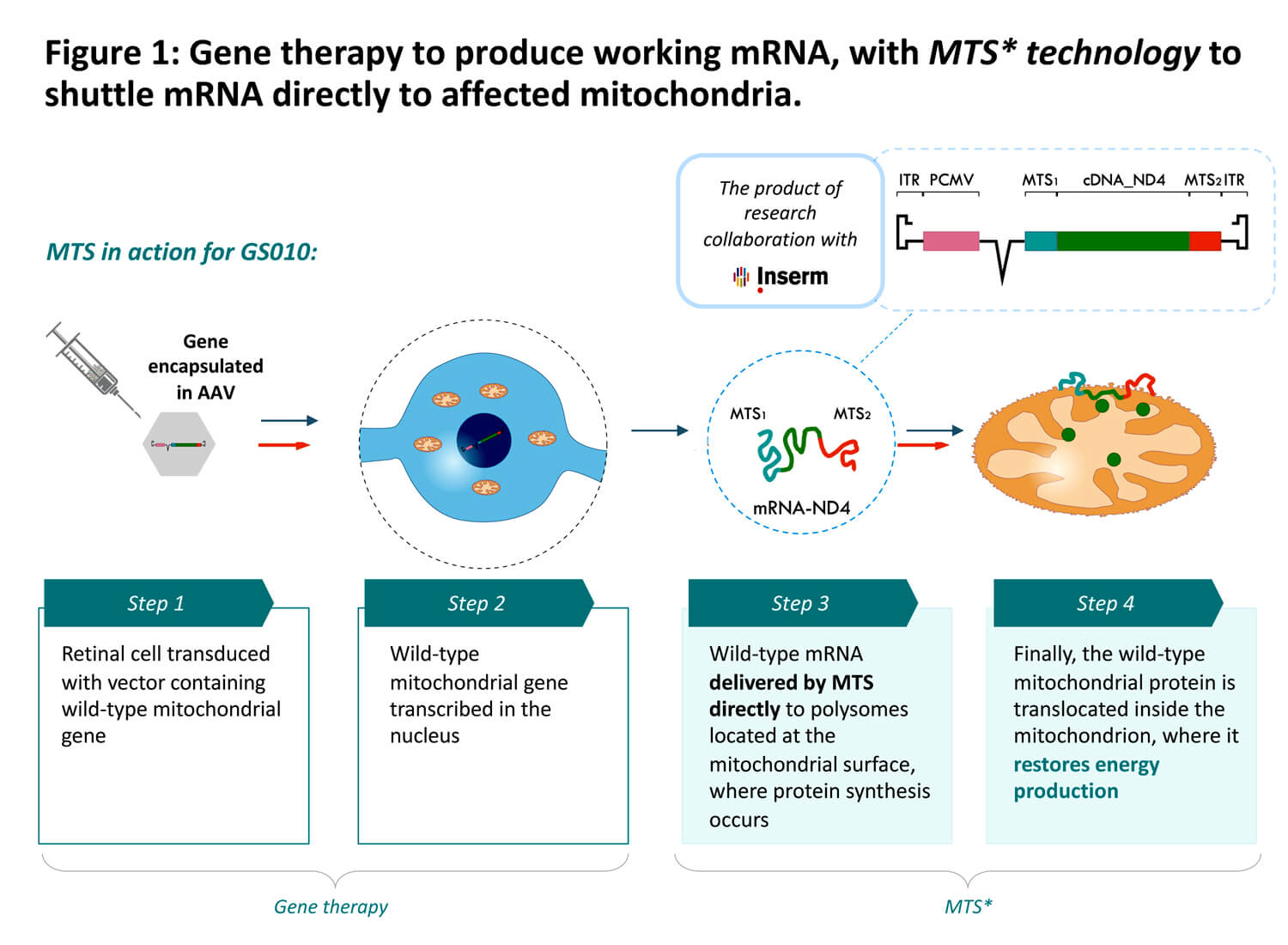 GenSight Biologics’ lead gene therapy candidate is a recombinant adeno-associated viral vector serotype 2 containing the wild-type NADH Dehydrogenase 4 (ND4) gene (rAAV2/2-ND4, GS010) being investigated for the treatment Leber Hereditary Optic Neuropathy (LHON). GS010 targets LHON via a mitochondrial targeting sequence (MTS) proprietary technology platform, which, when associated with the gene of interest, allows the platform to specifically address defects inside the mitochondria using an AAV vector (Figure 1). Based on results from two pivotal phase 3 clinical trials, GenSight expects to submit an application for marketing approval in Europe in the third quarter of 2020.

Results at 96 weeks (n-39) from the RESCUE phase 3 clinical trial in 39 subjects with LHON due to the ND4 mutation with an onset of vision loss up to six months prior to study treatment showed a durable bilateral improvement in VA of 25.0 ETDRS letters equivalent versus nadir (i.e. worst best corrected visual acuity (BCVA) after baseline, up to the week of interest) in GS010-treated eyes. Sixty-three percent of subjects achieved a ‘clinically relevant recovery’ (CRR) from nadir in at least one eye at week 96, while in the REVERSE phase 3 clinical trial in LHON subjects, the rate of CRR from nadir was 78%, significantly better outcomes than the natural history (~28%) in any prior studies [1]. Clinically significant and sustained bilateral visual improvement with unilateral GS010 gene therapy was observed, with a non-clinical study demonstrating presence of GS010 DNA in the untreated contralateral eye.

Optogenetics is a neuromodulation technique that uses light to control cells that have been genetically modified to express light-sensitive ion channels. GenSight’s GS030-DP is an optogenetic gene therapy targeting retinal ganglion cells, encoding an optimised form of channelrhodopsin, ChrimsonR, ChR-tdT, which is administered via a modified AAV2 vector (AAV2.7m8). A medical device GS030-MD (stimulating goggles) processes special ‘event’ images of the visual world, modulating a light source projected onto the retina in real time. An ongoing multicentre phase 1/2 study (PIONEER) will evaluate the safety and tolerability of escalating intravitreal doses of GS030-DP and repeated light stimulation in subjects with end-stage non-syndromic retinitis pigmentosa [2]. GenSight believes this technology offers the possibility of application to other retinal diseases where photoreceptors have degenerated, and may be transferable to the dry form of age-related macular degeneration (AMD). 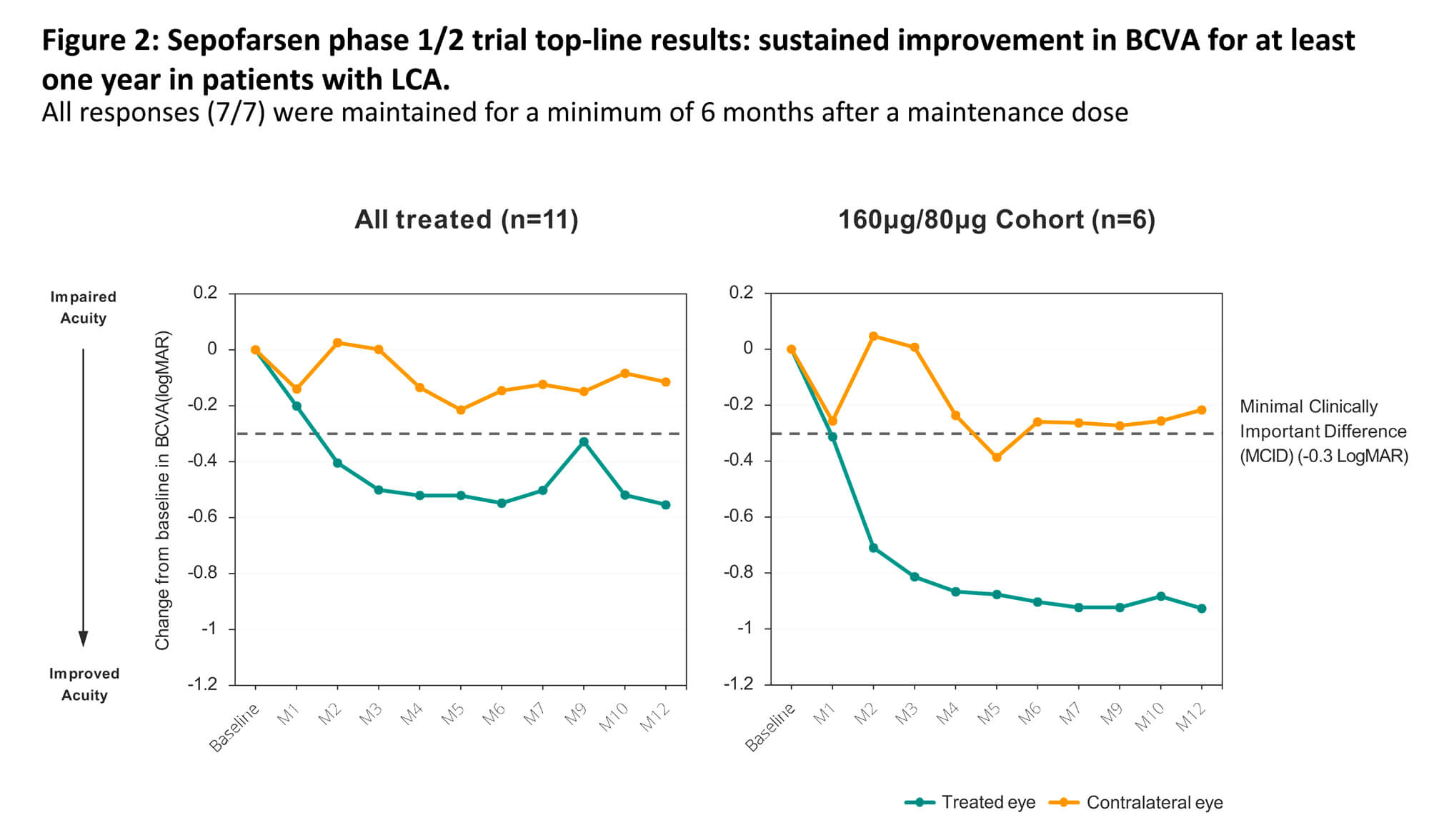 Intravitreal sepofarsen (QR-110, ProQR Therapeutics) is an investigational RNA-based oligonucleotide designed to address the underlying cause of Leber’s congenital amaurosis 10 (LCA10) due to the p.Cys998X mutation in the CEP290 gene.

Top-line results from a phase 1/2 dose range finding trial of sepofarsen in patients with LCA10 due to the p.Cys998X mutation in the CEP290 gene show that the target registration dose (80µg with a 160µg loading dose) was associated with a clinically meaningful and statistically significant improvement in vision and had a favourable benefit / risk profile (Figures 2 and 3). Further, a six-month dosing frequency was associated with durable improvements in vision, and the response observed at 12 months in the target registration dose was equal to or greater than the response at the three-month interim analysis.

Illuminate (PQ-110-003) is an ongoing randomised, sham-controlled 24-month phase 2/3 trial of sepofarsen that will initially enroll 30 adults and children (eight years of age and over) who have LCA10 due to one or two copies of the p.Cys998X mutation in the CEP290 gene and a baseline BCVA of 3.0 logMAR or better. This pivotal trial is designed as the sole registration trial for the clinical programme and is on track to deliver data in the first half of 2021. A study of RNA antisense oligonucleotide for intravitreal injection (QR-421a) for Usher syndrome is on schedule to deliver 12-patient interim data in quarter 1 2020. 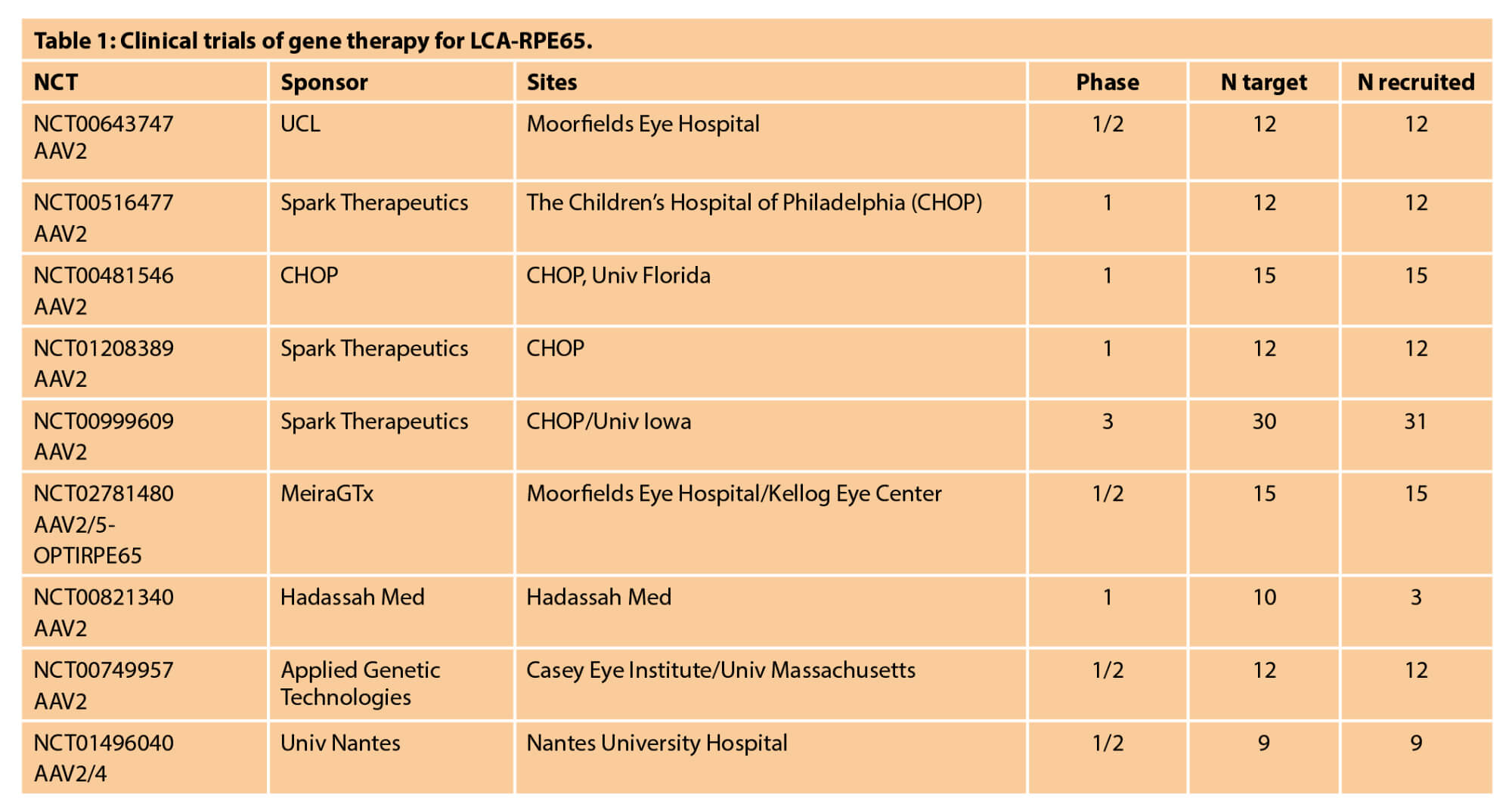 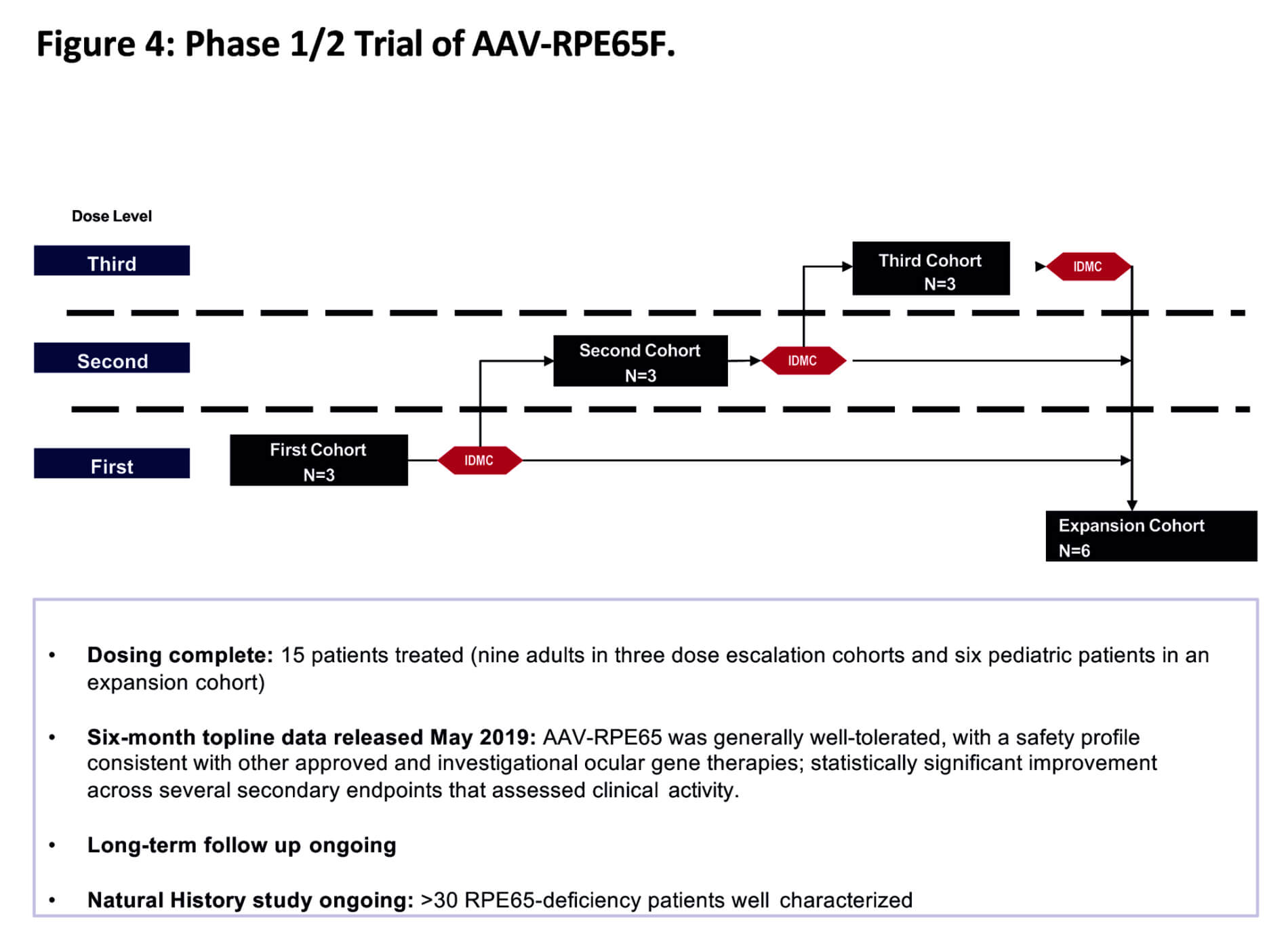 Data suggest treatment with AAV2/5-OPTIRPE65 improves functional vision, retinal function and central vision. Through 24 weeks, statistically significant improvement in vision-guided mobility was observed in all treated subjects (study eye vs. fellow eye) [4]. Over the six-month period, retinal sensitivity in treated eyes improved and there were significant improvements in visual function among eyes treated at the 1x1011 dose: median improvement in BCVA of 4.3 letters across all 1x1011 patients (n=9), median improvement of 5.3 letters in children (n=6, p=0.031). The 1x1011vg/mL dose has been chosen as the optimal dose for continued clinical development.

AAV-CNGB3 and AAV-CNGA3 (MeiraGTx) for the treatment of patients with achromatopsia are being evaluated in phase 1/2 clinical trials. AAV-RPGR (MeiraGTx) for the treatment of X-linked retinitis pigmentosa (RP) due to retinitis pigmentosa GTPase regulator (RPGR)-deficiency is also in phase 1/2 clinical development. Research continues into potential gene therapy treatments for AMD as well as gene regulation using VEGF2 Ab eye drops.

Investigator Dr Pravin Dugel recently provided an update from an ongoing phase 1/2a clinical trial of ReNeuron’s hRPC cell therapy candidate for retinitis pigmentosa [5]. Potential benefits of subretinal hRPC therapy include direct delivery into the subretinal space, the cells are cryopreserved, enabling on-demand shipment to site of care, and therapeutic effect independent of genetic subtype of disease. A good safety profile was observed in an open-label trial (n=12), allowing progression to a phase 2a clinical trial. Participants will be followed for two years to evaluate the safety and tolerability of hRPC. The primary efficacy endpoint is change in ETDRS letters from baseline to 24 months in the treated eye.

Among 22 subjects, dose escalation was generally well tolerated and there was no evidence of inflammation or proliferative vitreoretinopathy. No immune-related adverse events have been observed. Two patients experienced procedure-related vision loss. Clinically meaningful efficacy signals were consistently seen, with rapid and profound improvement in VA in some patients. The phase 2a segment of the study, which uses a cryopreserved hRPC formulation, enrols subjects with some remaining retinal function. Table 2 shows efficacy results from a recent follow-up in the phase 2a segment of the study.

Early evidence of safety and efficacy of an AAV8 viral vector encoding RPGR (BIIB112, NSR-RPGR, Biogen) for subretinal treatment of X-linked retinitis pigmentosa (XLRP) shows improvements in microperimetry with favourable safety (n=18) [6]. An ongoing part II, phase 2/3 study named XIRIUS is evaluating AAV8-RPGR retinal gene therapy for patients with RPGR-associated XLRP at clinic centres in the USA and UK. Data readouts from both clinical trial programmes are expected in the second half of 2020.

Gregori et al. reported results from multicentre trials showing that hESC-RPE cell transplants (50,000 to 200,000) were safe at four years post-transplantation in patients with Stargardt disease and atrophic AMD (n-23; AMD =10, SD=13) with no evidence of graft rejection, inflammation, retinal detachment, tumour or ectopic tissue formation [8]. Vision improvement of three lines or more of vision after 12 and 48 months of follow-up was observed in 35% and 15% for all treated eyes, compared with 13% and 5% for untreated eyes.

Holoclar (Chiesi Farmaceutici) received conditional marketing authorisation in December 2014 by the European Union (EU) as a treatment for moderate to severe limbal stem cell deficiency (LSCD) due to ocular burn(s) in adults, the first stem cell therapy recommended for approval in the EU. In a multicentre retrospective case series of 106 patients treated for moderate to severe LSCD, a total of 75 (72.1%) treatments were reported with a successful outcome and 51 patients (49.0%) had an improvement of at least one line of VA (or one category for the severely impaired cases). An ongoing phase 4 clinical trial, due to complete toward end 2021, will further evaluate the efficacy and safety of autologous cultivated limbal stem cell transplantation for restoration of corneal epithelium in patients (n=70) with LSCD. The first NHS-funded patient with LSCD caused by chemical eye burns was treated with Holoclar at Newcastle upon Tyne Hospitals NHS Foundation Trust in October 2019. 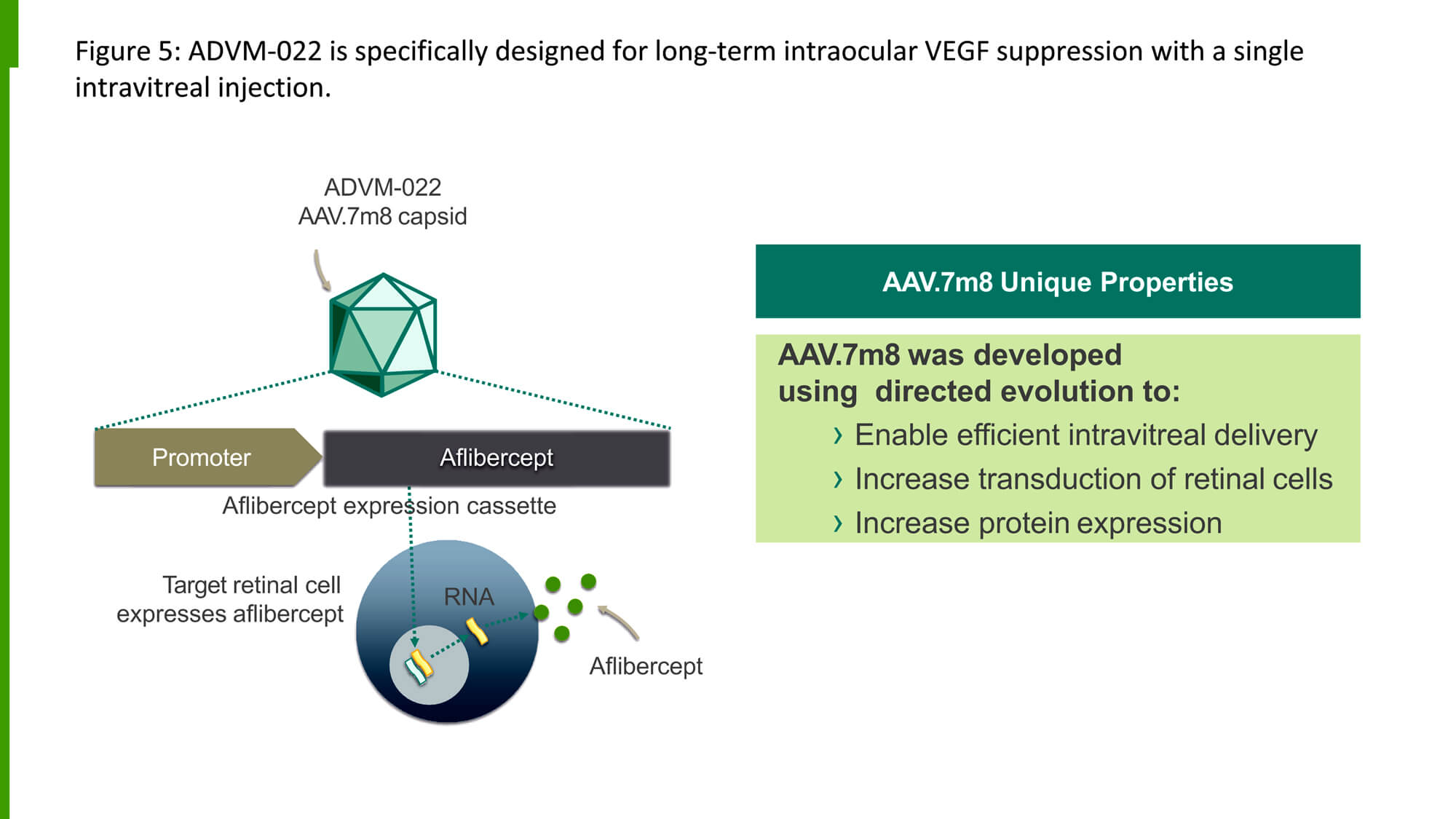 One-time intravitreal gene therapy for neovascular AMD and DR: turning the eye into a ‘biofactory’

OPTIC cohort 1 clinical trial data demonstrate intravitreal ADVM-022 is safe and well-tolerated, with robust sustained anatomical improvements and zero rescue injections through a median of 34 weeks in a tough-to-treat population of neovascular AMD patients with relatively good vision but recalcitrant fluid despite intensive prior anti-VEGF therapy [9]. Enrolment in further trial cohorts is ongoing and 52-week follow-up data from cohort 1 and 24-week data from cohort 2 is expected in H1 2020. Adverum plans to submit an Investigational New Drug application for diabetic retinopathy (DR) in the first half of 2020 and to then initiate a clinical trial of ADVM-022 for DR patients.

Dr Aaron Osborne, Chief Medical Officer of Adverum Biotechnologies, commented in an interview with Eye News: “Non-surgical gene therapy for chronic eye diseases represents a new frontier, with one-time intravitreal gene therapy for nAMD and other retinal conditions offering transformational potential for patients requiring long-term anti-VEGF therapy. It offers the prospect of in-office or clean-room delivery and expresses an anti-VEGF protein which is known to be highly effective. We have not seen any evidence of a decline in protein expression or a stop-point in preclinical studies conducted thus far. We envisage a one-time treatment that provides continuous VEGF suppression for effective maintenance of vision in nAMD patients.” 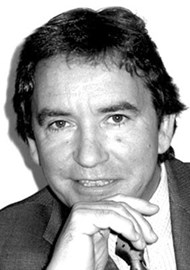