The management of raised intraocular pressure (IOP) in the context of ocular hypertension (OHT) and primary open angle glaucoma (POAG) remains a major contributor to the workload of ophthalmology units across the UK. Treatment of these conditions has historically centred on the use of the eye drops to lower IOP.

Whilst effective, topical medications are associated with significant burden on care providers and patients. Frequent clinic review is required to manage adverse side-effects to eye drops whilst the need to apply daily drops is difficult for patients and is reflected in low treatment adherence rates. Many studies have demonstrated that long-term and multiple topical medications are associated with poor patient adherence, multiple ocular and systemic side effects, and increase the risk for surgical failure when treatment requires escalation [1,2].

Selective laser trabeculoplasty (SLT) offers an alternative to medical therapy for managing raised IOP. In 1995, Latina and Parks introduced SLT, a procedure that selectively targeted pigmented trabecular meshwork (TM) cells and spared adjacent tissue. The IOP-lowering effect of SLT is thought to occur by absorption of heat through melanin in the TM and by remodelling of the meshwork through macrophage activation, reducing aqueous outflow resistance and lowering IOP without thermal or collateral damage [3,4].

SLT is a single, painless outpatient laser procedure which has a long-established, good safety profile and minimal recovery time [5]. Evidence has shown that the IOP-lowering effect is comparable to topical medical treatment; studies have shown that it is equivalent to prostaglandin analogue (PGA) eye drops (the gold standard first line therapy for lowering IOP) in efficacy, with most eyes achieving greater than a 30% reduction in IOP [6]. It has several potential benefits such as reducing the risk of non-adherence and complex treatment regimens and thus disease progression.

SLT can delay or prevent the need for eye drops for several years, avoiding the associated side effects. Whilst the effect of SLT is not permanent, it can be safely repeated. Despite the increasing body of evidence, SLT is not offered as first-line treatment in our clinics.

The recent publication of the LIGHT trial, a multicentre randomised trial comparing SLT with eye drops in treatment-naïve patients has reported that SLT offers equivalent clinical and quality of life outcomes to topical medications at lower cost [7]. The results from this high-quality randomised control trial (RCT) offer strong evidence to support the delivery of SLT as first-line treatment for managing raised IOP.

Nevertheless, it is important that ophthalmology services continue to meet the needs of their patients. Service provision and outcomes outside the setting of a major multicentre clinical trial need to be considered.

This retrospective study aims to evaluate the outcomes of real-world delivery of SLT as first-line treatment for raised IOP in treatment-naïve patients in a UK regional NHS referral centre.

This study comprised of a retrospective case notes review of all consecutive patient records who received SLT at Buckinghamshire Healthcare NHS Trust (Stoke Mandeville Hospital) between September 2013 and September 2018. Patients were identified from clinic records, laser clinic lists and laser logbooks. Each patient record was then reviewed on Evolve (electronic patient records system).

Patients were aged 18 or over, with no previous intraocular surgery (except uncomplicated phacoemulsification at least one year before). Patients were included if they had a diagnosis of OHT, POAG, secondary glaucoma, previous angle closure glaucoma (pseudophakic at the point of treatment), normal tension glaucoma or were glaucoma suspects. Patients had to complete at least two follow-up appointments for IOP measurement. Only treatment-naïve patients were included in this analysis, i.e., patients who previously received IOP-lowering medications were excluded. Patients were also excluded if there were contraindications to SLT (e.g., unable to sit at slit-lamp-mounted laser, inadequate view of trabecular meshwork or peripheral anterior synechiae, history of uveitis, neovascular glaucoma, or angle recession).

Eligible patients were then categorised according to their primary diagnosis. These diagnoses were all made following investigation with the following tests (as per NICE recommendations):

SLT was delivered according to standard protocol to 360° of the TM. A maximum of 100 non-overlapping shots (25 per quadrant) were used with a maximum of 1.2mJ of energy. An appropriate laser gonioscopy lens was used. The patient received a stat dose of G. Iopidine 1% immediately before and post-laser treatment. The post laser drop regimen was G. Acular three times a day for one week.

In patients with OHT or glaucoma secondary to pigment dispersion, the treatment was delivered in two separate sittings (180 degrees at a time) one to two weeks apart. These patients also received a stat dose of oral Acetazolamide 500mgs at the time of treatment and 250 mgs twice daily for a further two days. Additionally, their IOP was checked one hour following SLT (looking for IOP spike).

Treated patients with a primary diagnosis of OHT were analysed in further detail. Treatment criteria for patients with ocular hypertension included an IOP measurement of 28mmHg or more, normal optic nerve head and visual fields at their most recent assessment. Eligible patients had newly diagnosed or untreated ocular hypertension in one or both eyes, according to NICE guidelines [8].

For all patients, IOP was measured with the Goldman Applanation Tonometry (GAT) and corrected for central cornea thickness (CCT). The patients were reviewed at set intervals (six weeks, three months, six months, one year, two years, three years). IOP, any recorded complications and the need for further drop treatment during this time period was recorded.

Seven hundred and eighty-nine eyes received SLT between September 2013 and September 2018. The primary diagnoses were as follows: 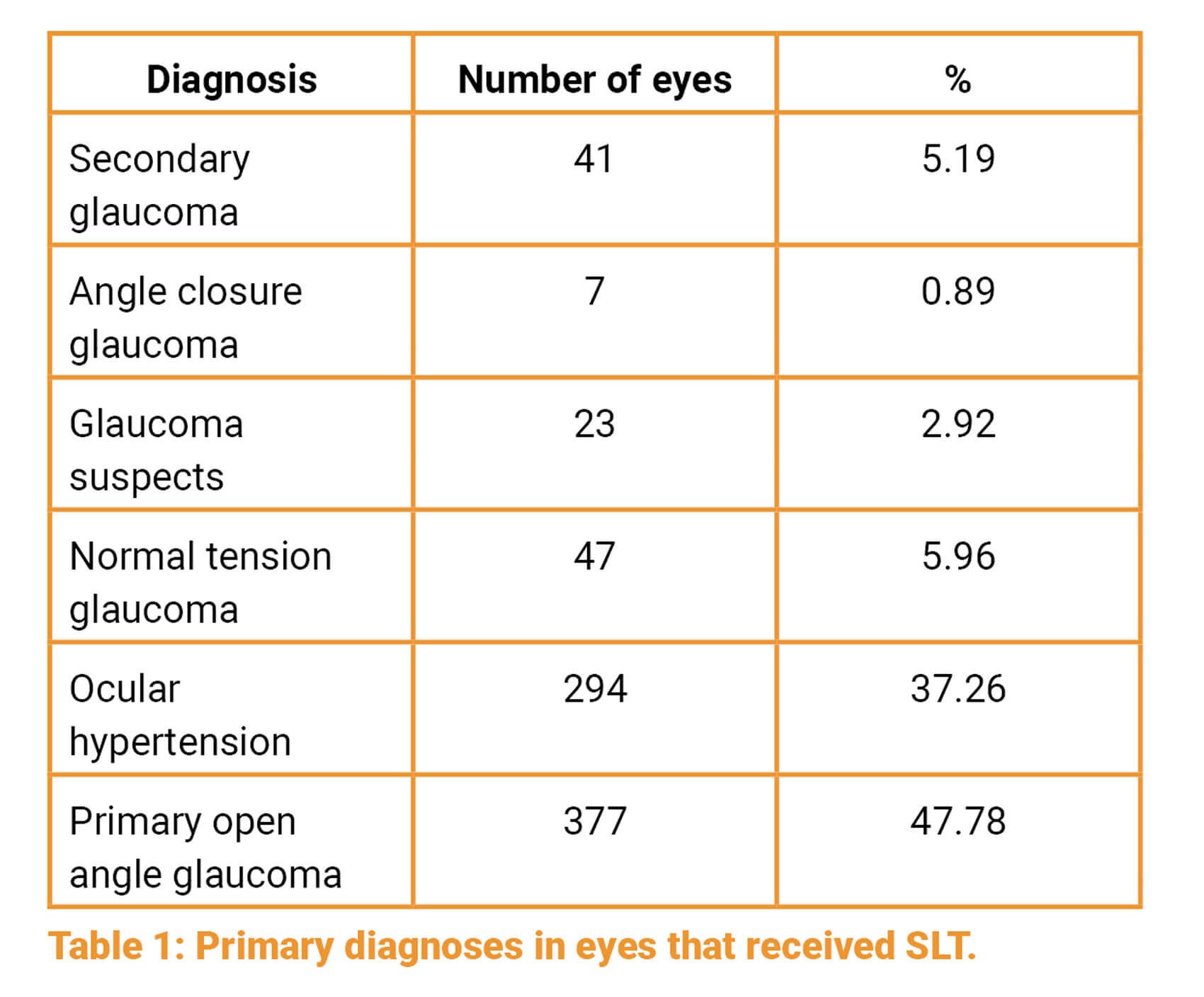 Two hundred and nineteen eyes (27.76%) in the ocular hypertension group satisfied the inclusion criteria. In this cohort, reduction in mean IOP was measured at six weeks, three and six months, and at one, two and three years after treatment: 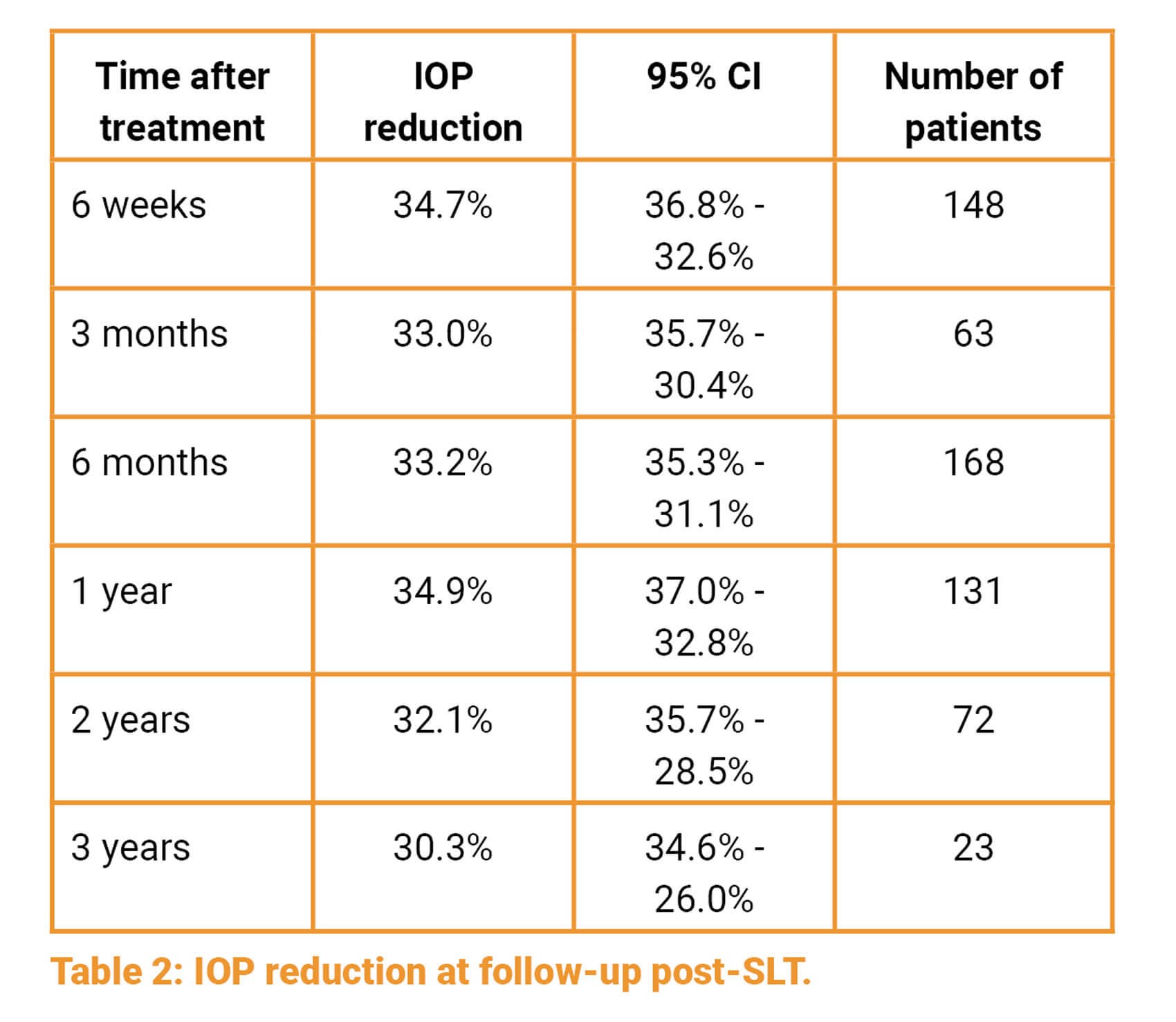 Some eyes were retreated with SLT at later time points. Thirteen (5.9%) eyes had one repeat treatment of SLT between six months to three years. 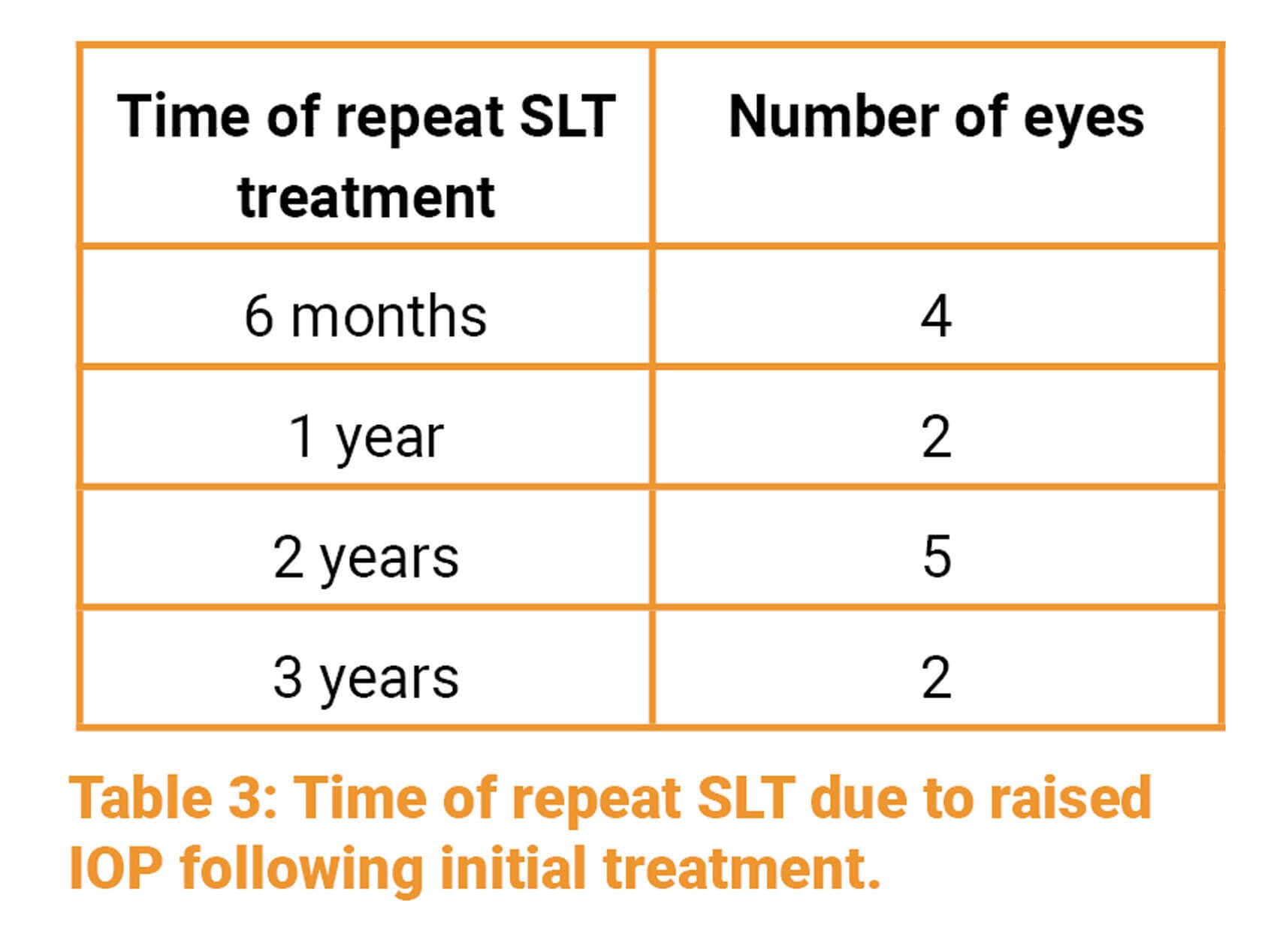 Twenty-three (10.5%) patients went on to be treated with IOP lowering medications at varying time points: 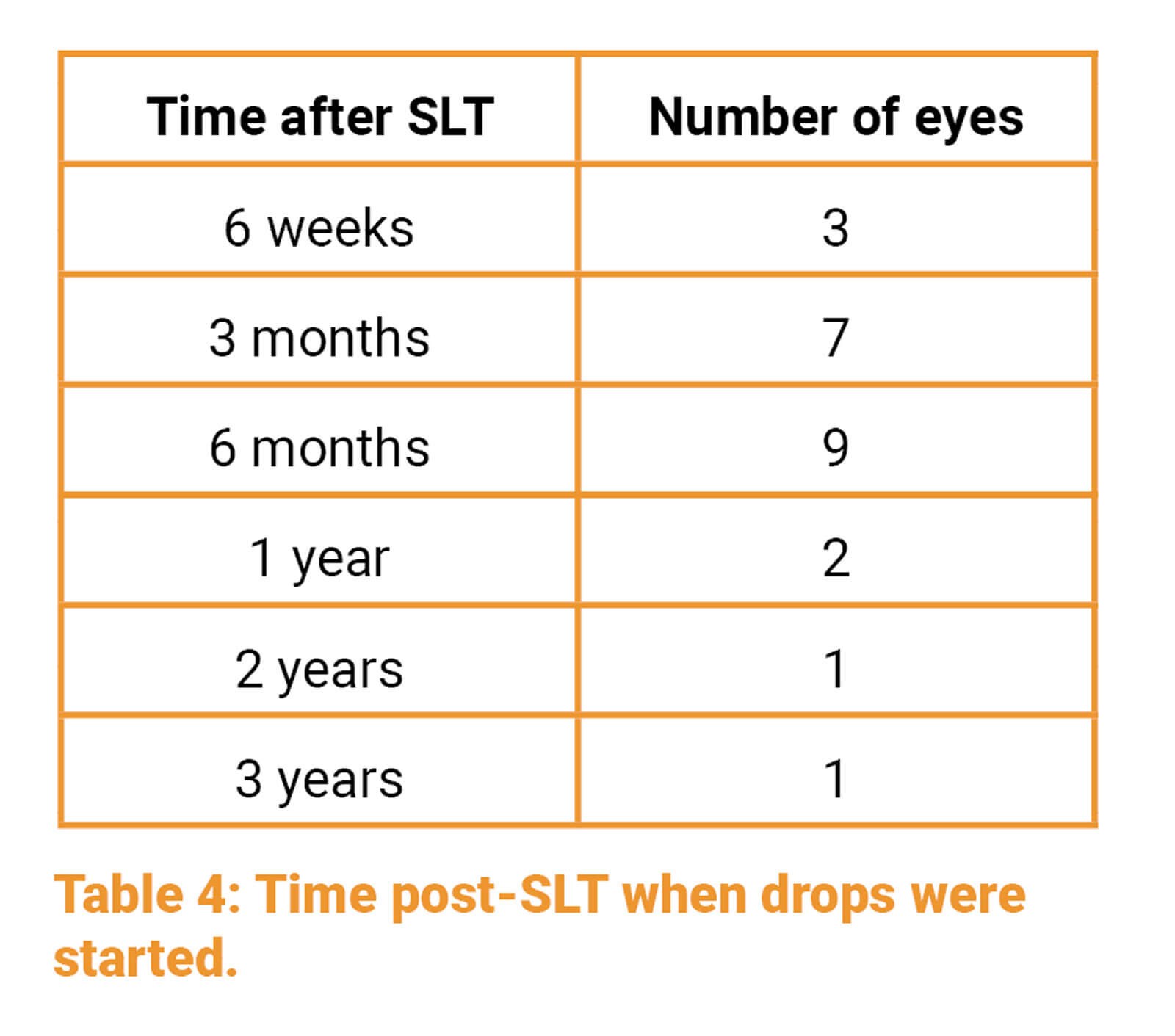 One (0.4%) patient’s medication was changed from PGA drop to G.Timolol due to developing cystoid macular oedema (after starting at three months).

One (0.4%) eye had a trabeculectomy for IOP control during the follow-up period. No patients were recorded to have other complications such as IOP spikes, corneal oedema or iritis.

This study presents our real-world experience of using SLT as a first-line treatment in a large number of patients with a diagnosis of OHT in a single UK centre.

Our data has demonstrated that SLT is effective in lowering IOP in the long term in patients with OHT, with a 30% reduction in IOP seen at three years follow-up. SLT enabled most of our patients to be drop- free, with only 10.5% requiring topical treatment afterwards. Only 5.9% of patients required repeat SLT treatment, which further demonstrates the effectiveness of the initial SLT treatment in most patients. In addition, no post-laser complications were reported in our patient cohort. Reductions in IOP seen in this study are consistent with other published studies (LiGHT Trial). 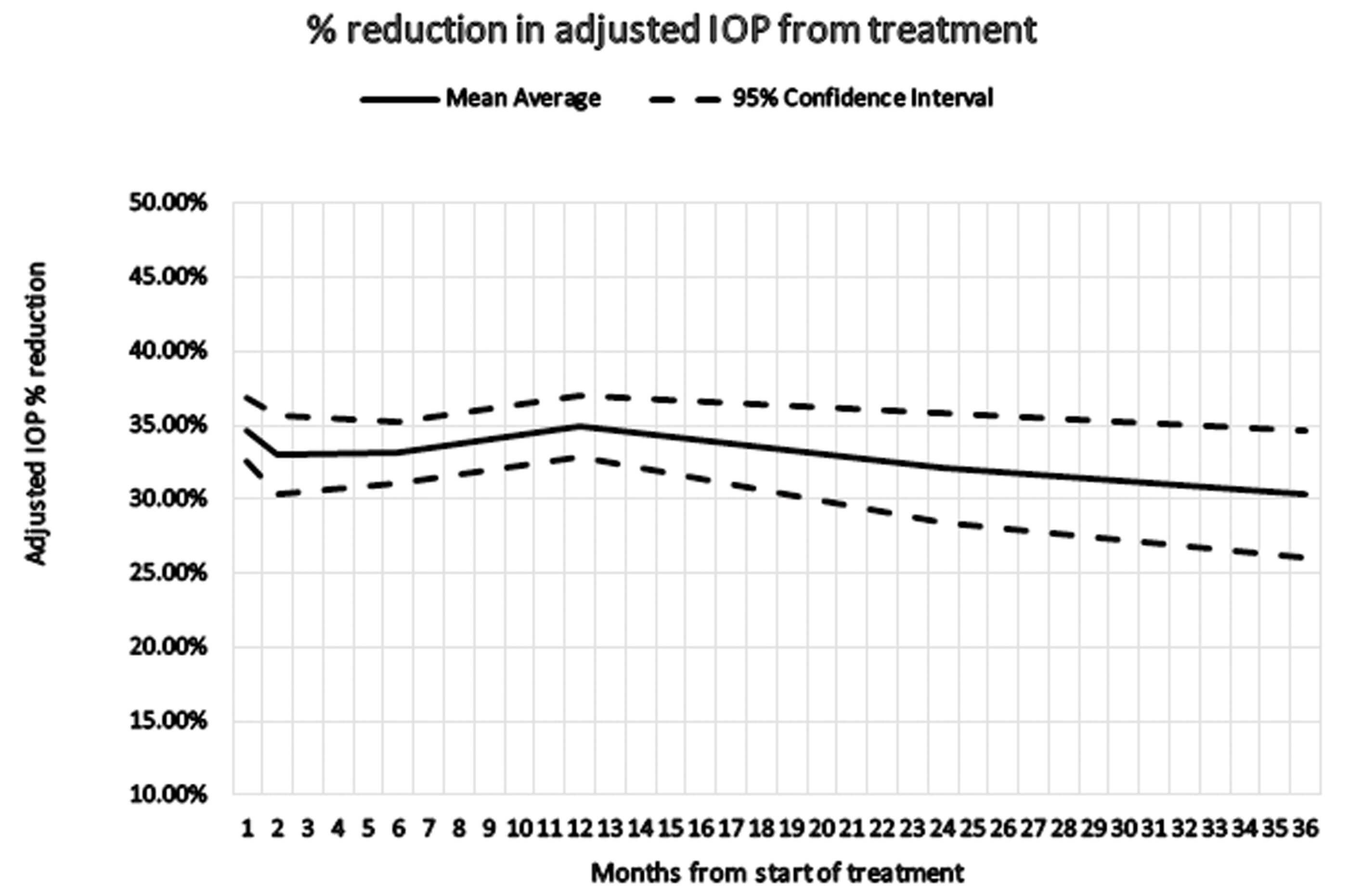 Figure 1: % reduction in adjusted IOP after treatment over time.

This real-world data demonstrates the effectiveness of SLT in managing OHT by a regional NHS ophthalmic service. With a rapidly growing and ageing population in the UK, NHS services are under increasing pressure to manage larger numbers of patients who are accessing ophthalmic care. In light of these trends and the need to provide more efficient treatment and services, SLT presents a safe, effective and cost-saving solution for the management of rising numbers of patients with OHT. Unlike topical treatment options, SLT does not come with the compliance issues and complications of topical therapies which can potentially result in poor disease management and increased need for follow-up in the long term.

This data has allowed us to develop a local protocol to standardise the primary management of OHT by our glaucoma service. This protocol recommends the use of SLT as a first-line treatment for the management of OHT.

The study is limited by being retrospective in design, meaning that not all patients were reviewed at the determined time points. Our inclusion criteria were also rather strict, including only treatment-naïve patients and looking in more depth at only those with a diagnosis of OHT. We also excluded patients with other ocular comorbidities. As with all retrospective case notes reviews some data is missing from the records. Visual acuity data was also not reviewed. 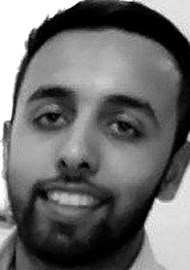 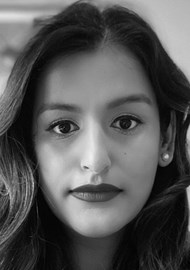 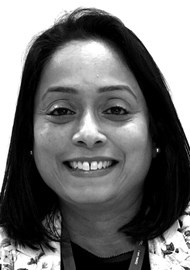