NICE drugs: an update on what’s good to go
By Rod McNeil

Treatment options recommended by the National Institute for Health and Care Excellence (NICE) must be readily available for use in the NHS of England and Wales. This article provides an overview of recent guidance from NICE and summary advice issued by the Scottish Medicines Consortium (SMC) for NHS Scotland covering ophthalmic pharmaceuticals, including expanded indications for licensed anti-vascular endothelial growth factor (VEGF) therapy and newer treatment options for retinal conditions.

Intravitreal anti-VEGF treatment aflibercept (Eylea, Bayer / Regeneron) is approved by NICE for neovascular (‘wet’) age-related macular degeneration (AMD), subject to its use being in accordance with the recommendations for ranibizumab as first-line therapy for wet AMD (Lucentis, Novartis / Roche) in NICE technology appraisal guidance 155, re-issued in May 2012 [1,2].

Aflibercept is a soluble VEGF receptor fusion protein which binds to all forms of VEGF-A, VEGF-B and placental growth factor, preventing these factors from stimulating growth of permeable new blood vessels associated with neovascular macular degeneration. Clinical trial data show that aflibercept, at its licensed dose, is clinically non-inferior to ranibizumab in terms of visual acuity outcomes at 96 weeks. Pooled results from VIEW 1 and VIEW 2 clinical studies show a mean number of intravitreal injections over 96 weeks of 16.5 for ranibizumab and 11.2 for the aflibercept ‘every eight weeks’ group [3].

Aflibercept for wet AMD should be administered monthly for three consecutive doses, followed by one injection every two months, with no need for monitoring between injections. After 12 months’ treatment, the interval for retreatment may be extended based on visual and anatomic outcomes.

In wet AMD, ranibizumab is injected according to a flexible dosing approach, so patients can gain and maintain vision, while reducing the risk associated with over- or under-treatment. This means that treatment is given monthly until maximum visual acuity is achieved and, once vision is stable, treatment with ranibizumab can be stopped. Patients are then regularly monitored to detect any loss of visual acuity due to the aggressive and rapidly changing nature of wet AMD, with retreatment initiated if vision becomes unstable. When starting treatment with ranibizumab, the patient’s visual acuity must be stable for three consecutive monthly assessments while on (ranibizumab) treatment. Therefore, the patient will receive a minimum of three monthly injections and then they will be monitored monthly, and treated as needed.

In April 2013, following a rapid review submission, ranibizumab secured NICE approval as a first-line treatment for diabetic macular oedema (DMO), but only in eyes with a central retinal thickness ≥400 microns at the start of treatment [4]. Treatment with ranibizumab appears to have a superior relative effect among DMO patients with thicker retinas, explained NICE in its assessment of the evidence. The committee noted that, when compared with laser photocoagulation alone, treatment regimens that include ranibizumab are effective in improving VA over two years, but there is no evidence of additional benefit in adding laser photocoagulation to ranibizumab.

NICE technology appraisal guidance TA301, issued November 2013, recommended fluocinolone acetonide intravitreal implant as an option for treating chronic DMO after what it terms an inadequate response to prior therapy [5]. Patients must be pseudophakic and, according to issued guidance, have persistent DMO which has been chronic despite prior therapy with macular laser photocoagulation or intravtireal anti-VEGF therapy. The NICE appraisal committee concluded that fluocinolone acetonide intravitreal implant showed greater clinical effectiveness than sham injection in chronic DMO patients and had been shown to be clinically effective in a patient subgroup that had a pseudophakic lens.

Significant side-effects associated with the use of fluocinolone acetonide implant and typically associated with the use of a steroid in the eye include acceleration of cataract development and increased rates of raised intraocular pressure. Almost all phakic patients receiving fluocinolone acetonide inserts developed cataract, but their visual benefit after cataract surgery (mean increase in BCVA letter score of seven) was similar to that in pseudophakic patients.

NICE plans to appraise the clinical and cost-effectiveness of dexamethasone intravitreal implant (Ozurdex, Allergan) within its licensed indication for treating diabetic macular oedema, alone or in combination with laser photocoagulation. The expected date of issue is April 2015. A regulatory submission has been made to the European Medicines Agency for aflibercept for the treatment of diabetic macular oedema. If aflibercept is referred to NICE for guidance to be produced regarding an expanded indication to include DMO, then it would be included in its appraisal work programme.

Dexamethasone intravitreal implant is a corticosteroid indicated for the treatment of macular oedema following either branch retinal vein occlusion (BRVO) or central retinal vein occlusion (CRVO) and is also indicated for the treatment of inflammation of the posterior segment of the eye presenting as non-infectious uveitis. NICE recommended dexamethasone intravitreal implant in July 2011 as an option for treating macular oedema following CRVO or BRVO [7]. The guidance from NICE states that treatment of branch RVO is only recommended when laser photocoagulation either has not been beneficial or is considered unsuitable due to macular haemorrhage.

Ozurdex suppresses inflammation by inhibiting oedema; one implant is administered usually every six months in the affected eye and up to six implants may be given. Pooled clinical trial results show that treatment with dexamethasone implants results in a statistically significantly greater incidence of responders (≥15-letter improvement from baseline at 90 days) when compared with sham (P<0.001).

Ranibizumab has a UK marketing authorisation for the treatment of visual impairment due to macular oedema secondary to retinal vein occlusion (BRVO or CRVO). NICE guidance recommends ranibizumab for these indications, although treatment for branch RVO is restricted to cases where laser photocoagulation has either failed or is contraindicated [8].

In both BRAVO and CRUISE clinical studies, monthly ranibizumab treatment was associated with statistically significant mean gains in BCVA in the treated eye compared with sham injection for the six-month treatment phase. Also, ranibizumab was associated with sustained and statistically significant gains in BCVA at 12 months in both studies (P<0.01 and P<0.001 respectively). NICE concluded that ranibizumab is an effective treatment for visual impairment caused by macular oedema secondary to BRVO and CRVO compared with sham injection, if there is no significant retinal ischaemia.

More recently, in February 2014, NICE approved aflibercept as a clinically effective option for treating visual impairment caused by macular oedema secondary to CRVO, in line with the drug’s UK marketing authorisation limiting its use to CRVO but not BRVO [9]. Clinical trial data showed that aflibercept was associated with a greater proportion of eyes gaining ≥15 letters from baseline to 24 weeks than sham injection.

In the United States, the Food & Drug Administration (FDA) is considering a supplemental license application for aflibercept for the treatment of macular oedema following branch retinal vein occlusion. Phase III data from the VIBRANT study, which evaluated aflibercept vs. laser treatment in patients with macular oedema following BRVO, show that 53% of patients treated with aflibercept every four weeks gained at least 15 letters in vision from baseline at week 24, compared with 27% of patients who received laser (P<0.001) [10]. Subjects treated with aflibercept every four weeks gained a mean 17.0 letters in BCVA from baseline to week 24, compared with a mean gain of 6.9 letters in the laser-treated group (P<0.0001).

Ranibizumab was approved by NICE in November 2013 as an option for treating visual impairment due to choroidal neovascularisation (CNV) secondary to pathological myopia [11]. Monthly monitoring is recommended for the first two months and at least every three months thereafter during the first year. Further treatment is recommended if monitoring reveals signs of disease activity, such as reduced visual acuity and / or signs of lesion activity.

Evidence from RADIANCE, a phase III clinical trial that compared ranibizumab with verteporfin photodynamic therapy (vPDT), showed that ranibizumab was associated with a greater improvement than vPDT in BCVA between baseline and months one to three. Gains in BCVA at month three were statistically significantly greater in both ranibizumab treatment groups (disease activity group: 10.6±7.3 letters, P<0.0001 compared with vPDT; disease stabilisation group: 10.5±8.2 letters, P<0.0001 compared with vPDT) than in the vPDT group (2.2±9.5 letters). The proportion of patients gaining 15 or more letters or reaching 84 letters or more in BCVA was 43.1% in the disease activity group, 38.1% in the vision stability group, and 14.5% in the vPDT arm. During 12 months of the study, patients received an average of 4.6 ranibizumab injections in group 1 (disease activity) and 3.5 injections in group 2 (stable).

Symptomatic vitreomacular traction (VMT) refers to incomplete separation of the vitreous from the macula and is an eye condition that may cause severe visual disturbance.

Ocriplasmin (Jetrea, Thrombogenics / Alcon) is a truncated form of human plasmin administered by intravitreal injection and is indicated in adults for the treatment of symptomatic vitreomacular traction, including when associated with macular hole of diameter ≤400 microns. Integrated analysis of two phase III clinical studies showed that 26.5% in the ocriplasmin-treated group compared with 10.1% in the placebo group achieved VMT resolution at day 28 (P<0.001). The difference was maintained from day seven through month six. Overall, 72% of ocriplasmin-treated patients who achieved resolution of VMT at day 28 did so within seven days.

Ocriplasmin represents the only pharmacologic treatment available for patients who suffer from symptoms of VMT, providing an immediate active treatment option in addition to vitrectomy or observation. Ocriplasmin is approved by NICE as a treatment option for VMT only in the absence of an epiretinal membrane and the patient has a stage II full-thickness macular hole ≤400 microns in diameter and / or has severe symptoms [12].

The NHS in England is considering a commissioning policy for an FDA-approved and CE-marked retinal prosthesis system (Argus II, Second Sight Medical Products) for rare degenerative retinal diseases. The 60-electrode Argus II retinal prosthesis system is indicated for use in patients with severe to profound retinitis pigmentosa, having some residual light perception and a previous history of useful form vision.

It is encouraging that ophthalmologists have many more effective approved options available to them for treating a broad range of retinal conditions. Careful scrutiny of the recommended treatment posology for specific indications is necessary, as there are notable variations within and across drug classes.

In many appraisals, approved treatment recommendations from NICE and other health technology assessment bodies followed only after significant price discounts were offered by the respective pharmaceutical manufacturer. A more flexible approach to medicine assessment and evaluation – capturing burden of illness and societal benefit evaluations – will hopefully continue to ensure access to innovative medicines and health technologies that may otherwise fall outside conventional cost-benefit thresholds.

The National Institute for Health and Care Excellence (NICE) assesses the clinical and cost-effectiveness of new drugs and technologies, ensuring patients have access to effective treatments and that the NHS makes the best use of its resources.

Following current consultation on proposed changes, NICE plans to introduce in Autumn 2014 revisions to how it values new drugs and other technologies for use in the NHS, to take account of new terms of reference for value based assessment (see Figure 1). 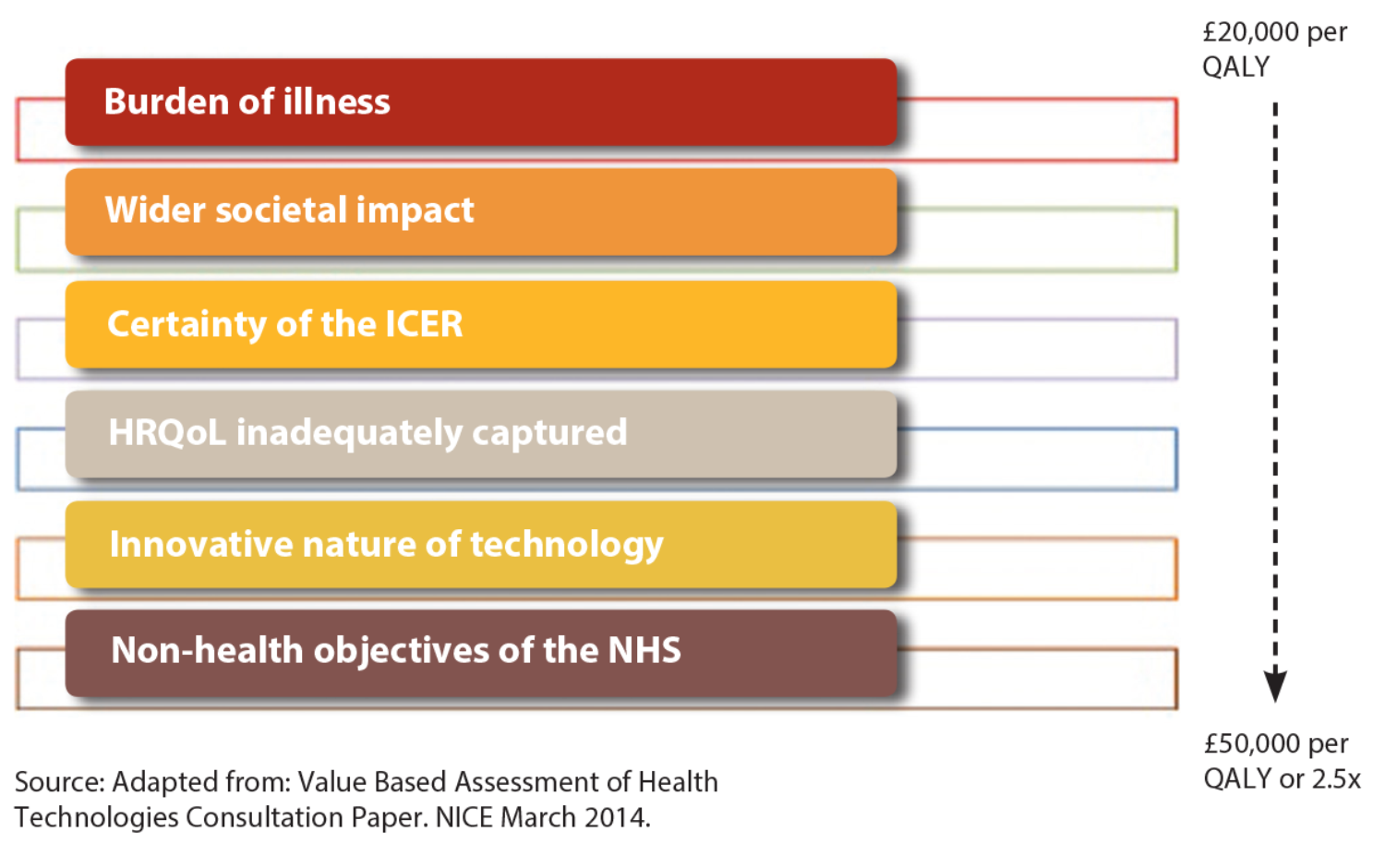 The concept of ‘burden of illness’ will be taken into account more explicitly and systematically during the appraisal evaluation process. Also, NICE intends to consider the ‘wider societal impact’ of a given disease.

These two new ‘value elements’ will be used as additional modifiers by appraisal committees to help decide whether to recommend a technology with an incremental cost- effectiveness ratio (ICER) above £20,000 per quality-adjusted life year (QALY), subject to a proposed maximum weighting of 2.5 or a £50,000 ceiling.

NICE appraisal committees will be asked to adopt a more favourable or flexible approach when considering treatments for people whose conditions have a progressively higher burden of illness and wider societal impact.

A broader definition of value should, say critics, increase overall access to innovative, effective medicines for conditions that impose a substantial burden on patients and society.