Grading of ocular inflammation in uveitis: an overview
By Rod McNeil

Anterior uveitis is the commonest form of uveitis, which can lead to severe morbidity if not treated appropriately [1]. Data from general ophthalmology practices suggest around 90% of uveitis encountered by comprehensive ophthalmologists is anterior uveitis [2]. Intermediate (vitreous), posterior (retina or choroid) and pan uveitis (entire uveal tract) are less common than anterior uveitis but are often more severe and more likely to cause loss of vision.

Overall, the incidence of uveitis ranges between 14 and 52.4 per 100,000, with a prevalence worldwide up to 0.73%, according to the International Uveitis Study Group (IUSG). In England, between 1500 and 5000 people are diagnosed with non-infectious intermediate or posterior uveitis each year [3,4].

The grading of cellular reaction in the anterior chamber (AC) helps in the assessment of the severity of anterior uveitis. Clinical grading of intraocular inflammation in uveitis is also useful in determining patient response to therapy as well as for long-term monitoring. Numerical grading provides a basis for visit-to-visit comparisons, and can help determine choice of treatment and follow-up management, with standardised reporting of outcomes. However, grading assessment of the cells or flare in the anterior chamber during slit-lamp biomicroscopy is subjective, qualitative and subject to intra- and inter-observer variability. Variations in clinical grading when assessing anterior chamber activity may contribute to inadequate or incomplete treatment in the management of patients with chronic uveitis.

Standardised terms for reporting clinical observations are routinely used to provide consistency in grading intraocular inflammation using cell counts in the aqueous humour and anterior chamber and subjective assessment of anterior chamber flare [5]. A scale for grading vitreous haze is widely used for recording vitreous inflammatory activity in intermediate and posterior uveitis. This is based on the Nussenblatt/NEI methodology involving a series of photographs depicting the various degrees of fundus vitreous haze, a technique that is easy to use, rapid and reproducible [6].

Uveitis is classified by the anatomical location of the intraocular inflammation, severity and disease course. Under the auspices of the IUSG and American Uveitis Society, a group of international uveitis specialists – the Standardization of Uveitis Nomenclature (SUN) group – in 2004 helped establish what are now commonly adopted standardised methods for reporting clinical data in uveitis. The SUN Working Group established an anatomic classification of uveitis as the framework for subsequent work on diagnostic criteria for specific uveitic entities. They also addressed consistent approaches for disease onset and course of the uveitis [5]. Standardised definitions of outcomes, including inactive, improvement and worsening of the inflammation, were also established. Recurrence (or flare) of uveitis is typically defined as an anterior chamber cells and / or vitreous haze grading of ≥ 2+ using the SUN grading system.

For vitreous haze, involving obstruction of fundus details by vitreous cells and protein exudation, the original Nussenblatt scale of clinical photographs illustrating six grades of vitreous haze was adopted by the SUN working group, but with the extra grade of 0.5+ for trace added to the grading scheme. Limitations include relatively poor discrimination of lower levels of haze, which are more common in uveitis than the higher grades of haze, and the fact that intervals between grades are not quantified [7].

A second SUN workshop in 2010, supported by the NEI, focused on using an informatics-based approach for the classification of uveitis syndromes [8]. The main classifications and features established by the SUN Working Group are summarised in Tables 1-6. 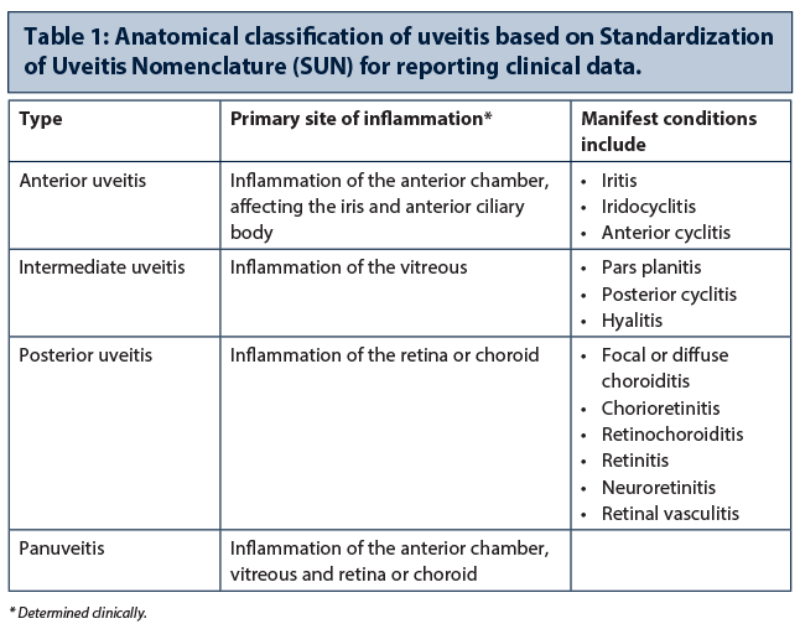 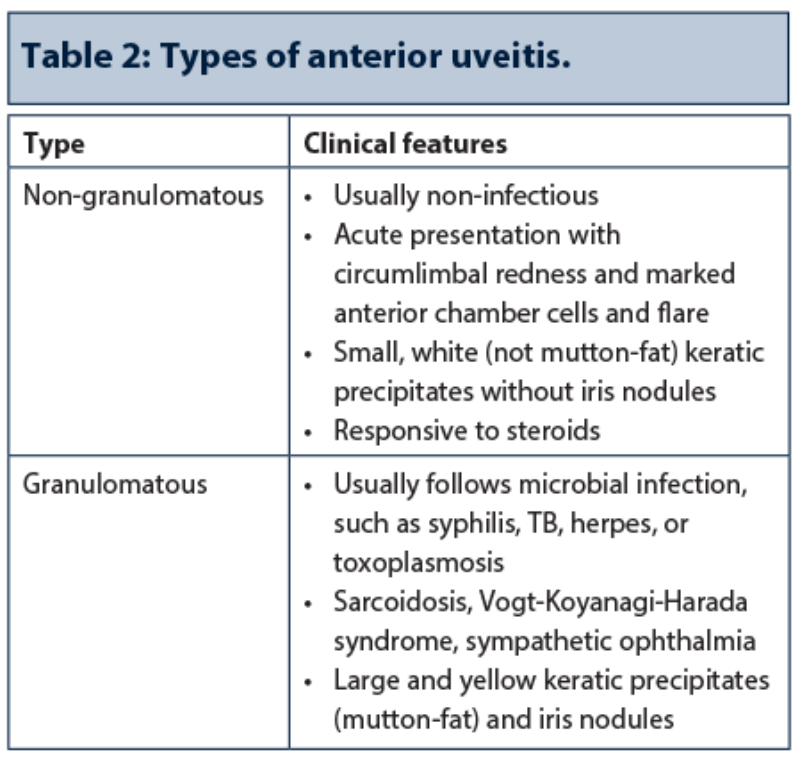 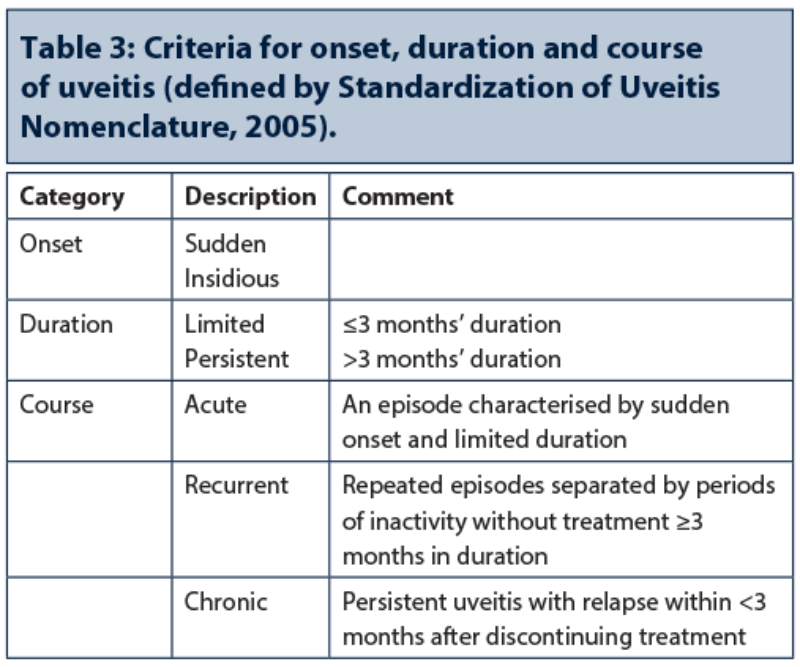 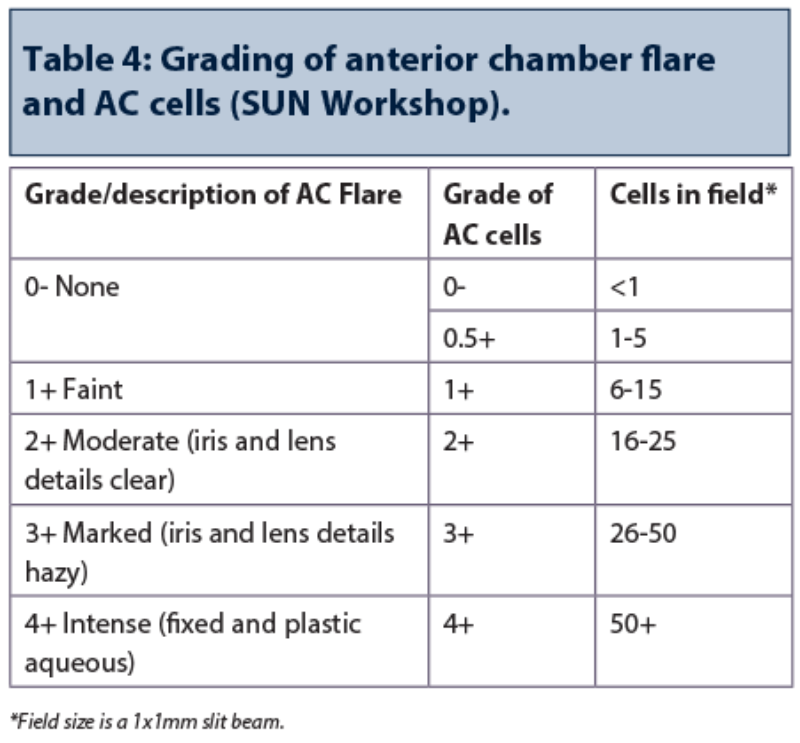 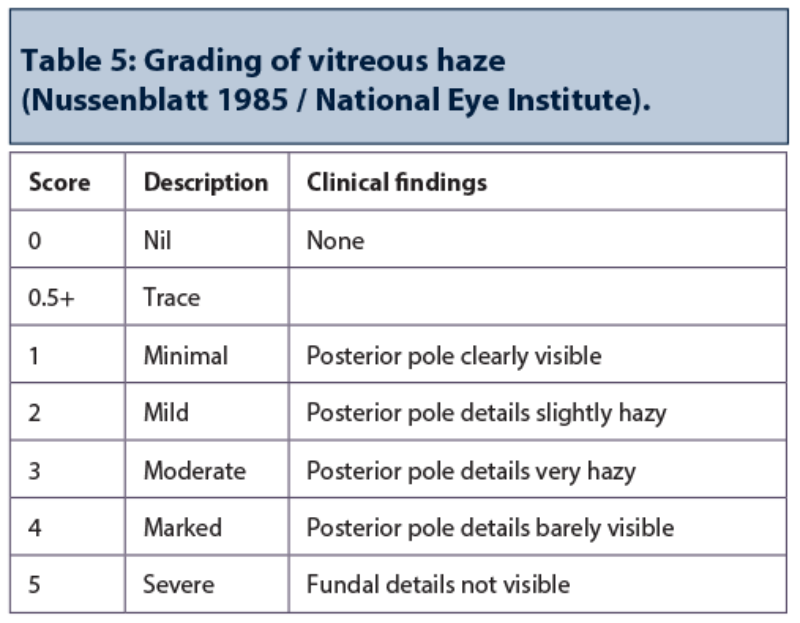 Laser flare photometry enables an accurate and highly reproducible measurement of intraocular inflammation [9]. Results from clinical studies demonstrate that flare measurements by laser flare photometry allow for precise monitoring of uveitic entities and prediction of disease relapse. The Kowa FM-700 (Kowa Company, Japan) is a laser flare cell meter with slit-lamp design that provides a non-invasive tool for in vivo imaging and quantification of aqueous flare by objective measurement of scattered light. The result obtained from protein density measurement is a ‘flare value’ represented as photon count per millisecond. The device uses a diode laser projected into the anterior chamber to scan a measurement window of 0.3mm X 0.5mm over 0.5 seconds. It is recommended that tests are always performed in a darkened room.

Konstantopoulou and colleagues assessed the accuracy of standard clinical grading of anterior chamber flare and compared the results with flare readings using the Kowa laser flare meter in an evaluation in 110 eyes [10]. Study authors concluded, “Compared with the Kowa laser flare meter’s numeric readings, the discrepancies observed indicate that clinical grading is an approximate science. The laser flare meter provides an accurate, reproducible, non-invasive assessment of aqueous flare that can prove valuable in research and clinical decisions.”

Mr Pavesio added that laser flare photometry is now being incorporated as part of routine clinical assessment of uveitis patients in everyday practice at Moorfields Eye Hospital. He also feels it will become a useful tool in the management of cataract and glaucoma patients.

“The most significant application of laser flare photometry is its use in uveitis management,” commented Dr Carl P Herbort, Centre for Ophthalmic Specialised Care, Clinic Montchoisi, Lausanne, Switzerland and University of Lausanne. “Flare, precisely measured by laser flare photometry, is the best way to assess active intraocular inflammation, even in chronic uveitis.”

Dr Herbort added, “The axiom ‘no aqueous cells means no active inflammation’ warrants revision. Because flare evaluated at the slit-lamp was only a qualitative parameter, predominance was given to cell counts, a semi-quantitative parameter using slit-lamp biomicroscopy. With the availability of laser flare photometry that provides objective and quantitative measurements of aqueous flare, flare becomes the more reliable parameter for assessing uveitis.”

SD-OCT imaging for automated vitreous analysis in patients with uveitis

For assessing vitreous inflammation in intermediate and posterior-involving uveitis, the main disease activity endpoint recognised by regulatory drug authorities is the NEI system for grading of vitreous haze. While valuable, this grading system is limited by being subjective with only moderate inter-observer agreement, poor sensitivity in a clinical trial setting (a two point change in typically required for showing significance), discontinuous with large steps in disease activity between categories, and poorly discriminatory at lower levels of inflammation [13].

The signal intensity of vitreous obtained on OCT can be measured objectively. By comparing this to the intensity obtained from the RPE, it is possible to calculate the VITREOUS:RPE signal ratio. This is being validated as an objective measure of vitreous haze.

The referenced study [15] explains that this ratio remains reliable when applied across different patient groups, including phakic, pseudophakic and aphakic patients and is also reliably used in patients who have undergone vitrectomy.

Accurate and complete descriptions, including standardised terminologies, help to classify diseases and syndromes. In the field of uveitis, which is an uncommon eye condition that can affect all age groups, the Standardization of Uveitis Nomenclature project has helped provide structured terminologies and easy to understand numerical grading schemes for reproducible clinical grading of uveitis syndromes. In routine practice, grading via a numerical bioscore of intraocular inflammation helps clinicians better monitor patient response and disease course, to titrate treatment, and provides useful outcome measures for clinical trials and research. However, clinical grading remains highly subjective and therefore variable, and there are gaps where there is no clear standardised approach (e.g. retinal vasculitis, choroiditis). Clinical grading cannot always help address chronic persistent uveitis.

More objective, quantifiable techniques will most likely help to improve monitoring and decision-making in uveitis practice. Precise and early diagnosis of non-infectious uveitis, excluding masquerade syndromes, is central to prompt and appropriate therapeutic intervention [17]. The mainstay of treatment is corticosteroids, but corticosteroid-sparing therapy increasingly warrants consideration early on. Good treatment compliance, and ongoing reliable monitoring of the treatment and therapeutic response, are needed for securing the best clinical outcomes.