Angle closure glaucoma (ACG) is not widely known to be a familial condition, yet the recent explosion of genetic data and large scale genome wide investigations have confirmed at least 13 genetic loci associated with ACG [1], and provided some insight into the clinical and pathobiological mechanisms of the disease.

Primary angle closure glaucoma (PACG) is defined as iridotrabecular contact with evidence of elevated intraocular pressure (IOP), or peripheral anterior synechiae (PAS), and glaucomatous optic neuropathy (GON), with a reproducible visual field defect [2]. PACG is often diagnosed at the extremes of phenotypes when there is advanced chronic visual loss, or acute angle closure (AAC) [3]. Understanding the genetic aetiology for PACG can help identify at-risk individuals at earlier stages of the disease.

There are more people worldwide bilaterally blind from PACG than progressive open angle glaucoma (POAG) [4] but reported family history of PACG is less well studied. A clinic report from Brazil found 25% of their cases to have a reported family history of PACG [5]. A population survey in Harbin, Northeast China, found a positive family history to be a significant risk factor of PACG, with an odds ratio of 65 under univariate logistic regression, or odds ratio of 1.65 in the multivariate model [6]. Amerasinghe et al. found that the relative risk of narrow angles to first degree family members is seven times higher than the general population of Singaporean Chinese [7]. Kong et al. compared 332 PAC patients, 228 POAG and 193 controls in Shanghai, China to investigate a glaucoma family history, finding that a parent with PACG contributed most to the family history of glaucoma in the PAC, compared to POAG where siblings and children contributed more to the family history of glaucoma [8]. In India, Kavitha et al. found that there was a 13.6 times greater odds of angle-closure in siblings of PAC/G subjects compared to open angle subjects in a hospital setting [9]. A greater age effect was observed for glaucoma in PACG.

When Lowe et al. first described a series of families with angle-closure in Australia [10], little was known about the natural history of the disease. He noted that the rate of AAC increased as anterior chamber depth (ACDs) got shallower, but the co-inheritance of PACG in multiple family members was much less than angle-closure observed without glaucoma. He proposed a major environmental component to the disease mechanism, while emphasising that familial PACG was rare but definitely observed [11]. Subsequent groups, such as Spaeth et al., Tomlinson et al. and Sihota et al. all reported small ocular biometry to be prominent in familial disease [12-14]. However, all these reports had low rates of AAC. 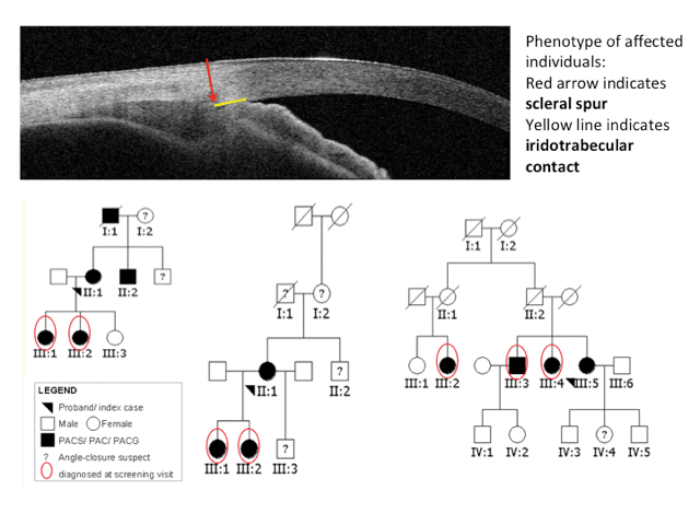 Figure 1: Example of an AS-OCT scan of an affected individual and three pedigrees seen in our family clinic (2006-2010) at Moorfields. Affected individuals are indicated as black squares or circles.

The most recent segregation analysis reporting 114 PACG families from Chongqing, China [16], found a significant difference between gender groups. They concluded that the inheritance of shallow angles may be a sex-influenced trait with a reported female:male ratio of 2.87:1, consistent with the ratio found in other East Asian population studies of PACG [4,17]. Families with an unaffected (U) parent and an affected parent (A) accorded with an autosomal dominant hereditary trait, with the highest heritability found for female relatives with female probands [16].

Several investigators have provided data on the segregation of ocular biometry and PACG. Tomlinson and Leighton [14] examined 16 index PACG patients, their relatives (seven siblings, 14 offspring) and 49 controls, finding that the unaffected relatives and patients with PACG also had smaller corneal diameters, shallower (ACDs), thicker crystalline lenses and shorter axial lengths compared to age-matched controls. However, those affected with PACG had more anteriorly positioned lenses, which were not observed in unaffected siblings and offspring. This finding was also observed by Rosengren [18] and Philips and Storey [19]. Törnquist from Sweden [20] found that eyes with PACG had ACDs of 1.0mm less than normal eyes, or two-thirds of the normal depth at corresponding ages.

Twin studies are often the starting point of dissecting genetic conditions, but there are no reported twin studies in PACG. A curious case report of two elderly identical twins who were in a heated argument and fist fight and both went into AAC together demonstrates that stress and other physiological triggers can influence disease presentation [21]. Hypermetropic refractive error is associated with angle-closure, but its contribution to PACG is likely to be incorporated with the heritability of ACD and AL [22-24].

Once a clear phenotype is identified, such as AAC or PACG, genetic studies can be performed. Aung et al. reported genetic linkage in two large Chinese families, examining the sharing of phenotypic and genetic factors, more statistically found together in affected individuals than unaffected ones [25]. To date, this method of genetic linkage has not identified any causative genes for PACG. However, in more extreme forms of the disease, two genes, membrane frizzled related protein (MFRP, associated with retinitis pigmentosa) [26,27] and protease, serine 56 (PRSS56) [28] have been identified to be causative for autosomal recessive microphthalmia / nanophthalmia. Both genes were identified using linkage analysis.

Aung et al. also examined 108 patients with PACG (49 with AAC and 59 chronic cases) for MFRP and CHX10 mutations [29]. CHX10 is a homeobox-containing transcription factor critical for progenitor cell proliferation and bipolar cell determination in the developing retina. One potential disease causing variant, G243D was observed in CHX10 in a patient with acute PACG who also had a MFRP R257H mutation. The clinical characteristics of the patient involved: an 82-year-old patient diagnosed at 75y with bilateral cup to disc ratio (CDR) of 0.8 and 360° of PAS and biometry of 21.05mm for AL and 2.09mm for ACD. This patient also carried an R46X polymorphism in the myocilin gene (MYOC) [30]. MYOC is an autosomal dominant genetic cause of POAG. The G243D mutation in CHX10 may be pathogenic as it was not found in 400 normal controls, but it was not possible to show segregation of the G243D mutation in the subject’s family members [29]. This was an example where sequence changes in three / multiple genes may each be contributing to the disease in an individual patient with late onset symptomatic PACG.

PACG is clearly a complex disease with multifactorial inheritance, so it is no surprise that more success has been achieved with genome-wide association studies (GWAS). Using this methodology in 2012, three single-nucleotide polymorphisms (SNPs), rs11024102 in PLEKHA7, rs3753841 in COL11A1 (a connective tissue gene) and rs1015213 between PCMTD1 and ST18 were found to be associated with AAC/PACG [3]. Day et al. compared these three SNPs for association to ACD, AL and corneal keratometry using an additive genetic model for each allele in the EPIC-eyes cohort. The presence of one A allele for rs1015213 was associated with a 0.07mm shallowing of ACD compared to wild type homozygotes after adjusting for the effects of age and sex [31]. The other two SNPs were not associated with the biometric characteristics tested. Little is known about the function of PCMTD1 or ST18, the latter encodes for suppression of tumorigenecity 18 which is thought to modulate inflammation and apoptosis in fibroblasts [32] and has been reported as a breast cancer tumour suppressor gene [33].

The only GWAS study of ACD to date was reported by Vithana et al. where three well-characterised population based studies: Singapore Malay Eye Study (SiMES), Singapore Indian Eye Study (SINDI) and Beijing Eye Study (BES) with a total of 5308 participants were analysed. Two strongly associated intragenic SNPs on chromosome 3q27.1 were identified [34]. The gene of interest, ABCC5 (rs1401999) was widely expressed and regulates cGMP levels in its role as an organic anion pump. They were able to replicate the finding in a further cohort of Chinese subjects but not in Caucasians. This SNP was only marginally associated with PACG in a group of patients. Interestingly, this gene was not found to be replicated in the meta-analysis paper presented by Rong et al. in 2016 [1]. Nongpiur et al. hypothesise that the ABCC family of genes may be involved in glaucoma as ABCC4 has previously been found in the trabecular meshwork of a rabbit model with pigmentary glaucoma [34]. Perhaps overlapping anterior segment phenotypes will begin to unravel as more glaucoma genetic studies take place.

The most recent GWAS publication in PACG reported five further SNPS in EPDR1, CHAT, GLIS3, FERMT2, DPM2-FAM10A genes [35], and confirmed the original three loci (PLEKHA7, COL11A1 and PCTMD1-ST18) in the 2012 Vithana paper [3] to be associated with AAC and PACG.

The strongest association signal to date is PLEKHA7. This cell-cell signaling gene lies close to the NNO1 locus linked to extreme nanophthalmos where axial lengths of less than 19mm and refractive errors of more than +7DS were observed [36]. The GWAS could not demonstrate an effect of PLEKHA7 on axial biometry or nanophthalmos. However, it does suggest that physiological mechanisms that maintain homeostasis in epithelial and endothelial tissues can alter the susceptibility to AAC and PACG, i.e. more advanced stages of the disease.

In GWAS studies, often the only SNPs that are reported are ones that have reached genome-wide statistical significance set at a threshold of P<5 x 10-8. In the 2012 Vithana paper [36], the fourth most significant locus was thioredoxin reductase 2 (TXNRD2), a gene involved in oxidative stress. Tissue expression studies and the relationship between this gene and its potential contribution to AAC or glaucoma have not yet been studied. The enzyme thioredoxin reductase (TR) is a dimeric NADPH-dependent FAD containing enzyme that catalyses the reduction of the active site of disulphide of thioredoxin and other substrates. It is a member of a family of pyridine nucleotide-disulphide oxidoreductases and a key enzyme in the regulation of the intracellular redox environment both in the cytosol and mitochondria [3]. This gene partially overlaps with the COMT gene on chromosome 22. The COMT gene encodes for catechol-O-methyltransferase (COMT) which catalyses the transfer of a methyl group from S-adenosylmethionine to catecholamines, including the neurotransmitters dopamine, epinephrine and norepinephrine. Oestrogens such as 17β-oestradiol, catabolised in hydroxylation reactions, are inactivated by methylation, a process catalysed by COMT [38]. This pathway is important in oestradiol metabolism.

There is increasing evidence that the inheritance of particular variants in these oestrogen-metabolising genes can modulate the risk of hormone dependent disorders such as prostate, ovarian, lung and breast cancer [38]. Given the female preponderance to ACG, this area of work to understand the molecular genetic and biochemical mechanisms underlying PACG could lead to breakthroughs in our scientific understanding and delivery of novel therapies. 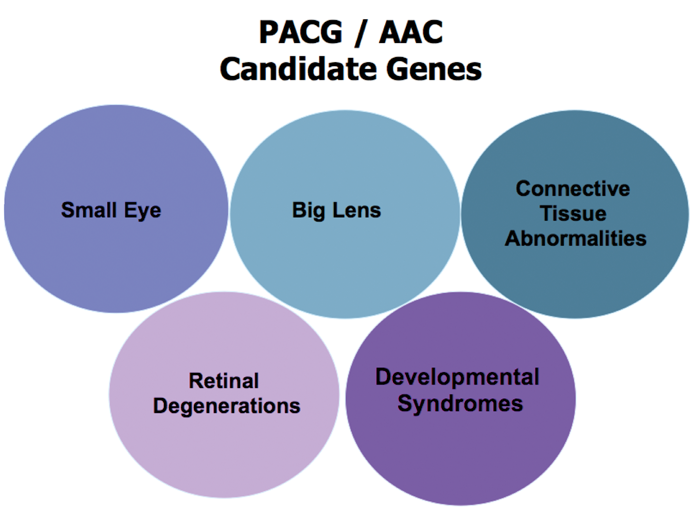 Figure 2: Phenotypes to look out for when considering a genetic cause for angle closure glaucoma.

There is emerging research in the genetics of ACG and keen phenotyping (skilled clinicians) in partnership with molecular biologists and statisticians can bridge the gaps in our knowledge of the disease. Figure 2 simplifies the phenotypes that have been discussed in this article. Even without genetic data, ophthalmic practitioners can recommend screening of family members, and proactively teach and learn gonioscopy, as accurate elucidation of clinical signs and appropriate management is essential for the diagnosis and prognosis of patients with AAC and PACG.

Contact your local Allergan and ATHENA (Allergan Ophthalmic Professionals Educational Alliance) representative for the Early Diagnosis Program 4 – Gonioscopy in the diagnosis of glaucoma by Sancy Low and Gus Gazzard to get teaching materials and arrange departmental gonioscopy learning. 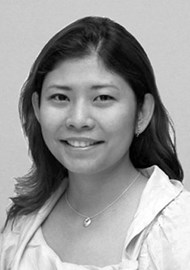 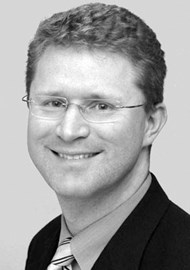