A national charity is asking ophthalmologists and eye health professionals to help them reach out to the tens of thousands of blind and vision impaired ex-service men and women who are currently missing out on vital support to help them adjust to life with sight loss.

In a recent survey, Blind Veterans UK’s Veterans and Carers Survey, Blind Veterans UK found that the majority (84%) of its beneficiaries said they were most likely to consult with the eye clinic at their local hospital about their sight loss, although almost a quarter of respondents struggled with severe sight loss for six years or more before finding out about the support available to them. These findings have led to Blind Veterans UK urging eye health professionals to help improve the pathways to vital support for people newly diagnosed with sight loss with 61% of the charity’s beneficiaries saying they wished their eye health professional had told them about the life-changing support available. 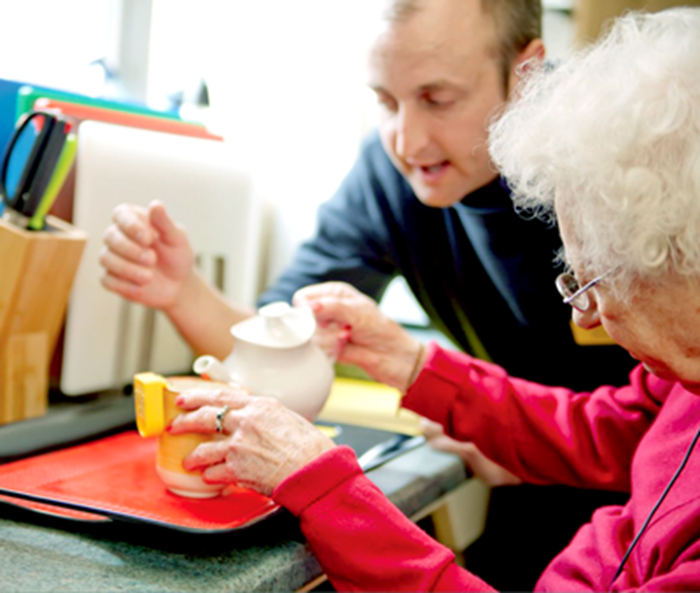 An example of some of the equipment available, a liquid level indicator. 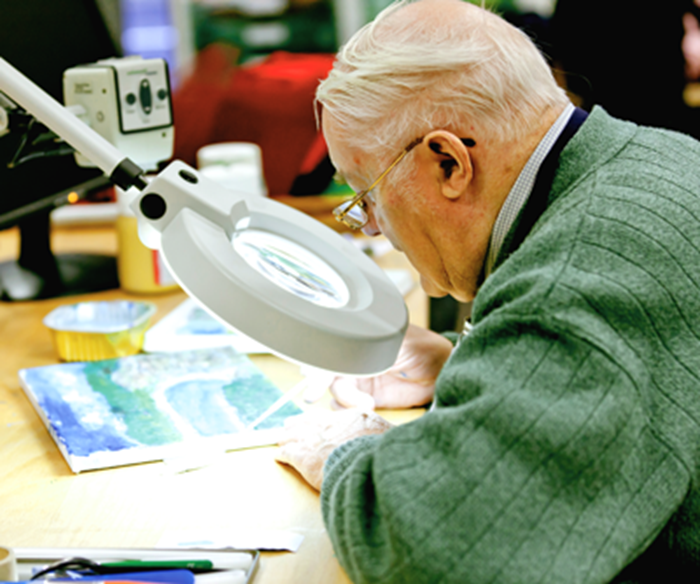 Blind Veterans UK is the charity for Armed Forces and National Service veterans with severe sight loss, providing specialist services and support to help them overcome the challenges of sight loss and live full, independent lives.

The charity has three training and rehabilitation centres in Brighton, Sheffield and Llandudno, North Wales and a network of welfare officers around the UK, offering emotional and practical support to veterans, no matter when they served or how they lost their sight.

Support includes training, in areas such as IT and independent living skills, rehabilitation, equipment and emotional support as well as recreational opportunities such as archery and art and craft. Many find that Blind Veterans UK is like a second family, offering camaraderie and social opportunities with people in a similar situation.

Eighty-four-year-old blind veteran Brian Davies contacted the charity, after his local opticians encouraged him to get in touch. After Brian’s wife sadly passed away, he had been struggling to cook for himself at home but now, after receiving support and training from Blind Veterans UK, he has become much more confident in the kitchen.

Brian joined the Auxiliary Air Force part-time, while he was an apprentice engineer in 1950. During his apprenticeship, Brian worked on developing the jet engine, meaning that his call up to National Service was delayed because of the importance of his work. 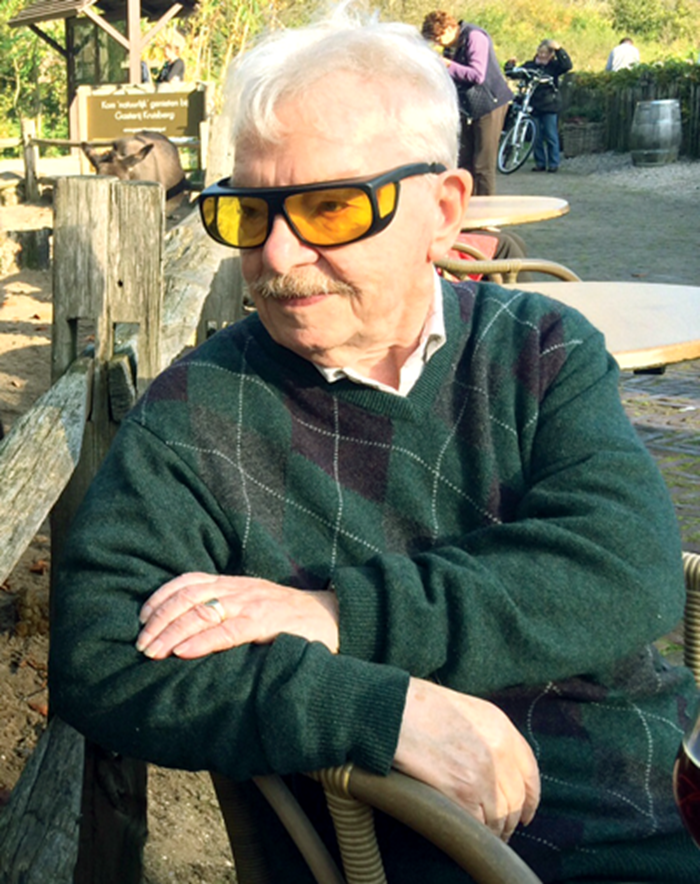 Then at the age of 25, Brian joined the RAF as an engine mechanic and was stationed around the UK during his two years before being discharged in 1957.

Some 20 years after leaving the RAF, Brian began to notice his sight deteriorating in his left eye and he was left with just peripheral vision. Another 20 years on, a blood vessel ruptured in Brian’s right eye, robbing him of his remaining sight.

Brian said: “At first, they didn’t know why my left eye had started to go, but I was told there would be a chance that the rest of my sight would go too. Then, when it eventually did, I didn’t take it very well.”

Despite losing his sight many years after leaving service, Brian was eligible for sight loss support from national charity Blind Veterans UK – although he didn’t realise this until he visited his local opticians in Middlesbrough.

Brian said: “It was by pure chance that I found out about Blind Veterans UK. I’d lost my magnifying specs, so I rang the hospital, and they referred me to Specsavers. I went straight there, they replaced my glasses, but then they asked if I’d ever served in the Armed Forces. I told them I’d done National Service and they told me all about Blind Veterans UK and encouraged me to get in touch.”

Brian contacted Blind Veterans UK at the beginning of 2014 and has since received vital services and support to help him live independently with sight loss. He has visited the charity’s centre in Sheffield, where he has received specialist equipment, training and emotional support to help him relearn vital life skills, including being able to get back in the kitchen again – one of the main things that Brian has missed since losing his sight.

Brian said: “Blind Veterans UK has been very good to me – it is a brilliant organisation. I’ve done all sorts of training, I’ve learned how to use a computer and they’ve taught me to use a white cane properly. They’ve fitted me out with all kinds of gadgets, and I’ve been for training at the Sheffield centre to help me in the kitchen. I was getting a bit fed up with microwave cooking all of the time. Now, I’ve become a lot more confident and I can cook properly again. Blind Veterans UK has taught me how to make a curry and spaghetti bolognese from scratch!”

Eighty-six-year-old blind veteran John Endres rediscovered his love of fishing recently, with Blind Veterans UK’s help, after he was forced to stop his favourite past-time due to his severe sight loss.

Lifelong fisherman John stopped fishing over eight years ago after his sight deteriorated due to age-related macular degeneration, but when he attended Blind Veterans UK’s Fishing Week at the charity’s Llandudno centre, John has now been able to cast his rod once more.

John said: “Once my sight went, I’d given up fishing because I couldn’t see to tie the flies anymore. Being able to fish again with the help of Blind Veterans UK was brilliant – it felt really good to be doing something that I thought I couldn’t do anymore. It was a really good week, I thoroughly enjoyed it – it was a marvellous chance to be able to fish again. There was a good group of us on the week, so it was great to get to know them all, we even had a small bet on who would catch the biggest and heaviest fish!” 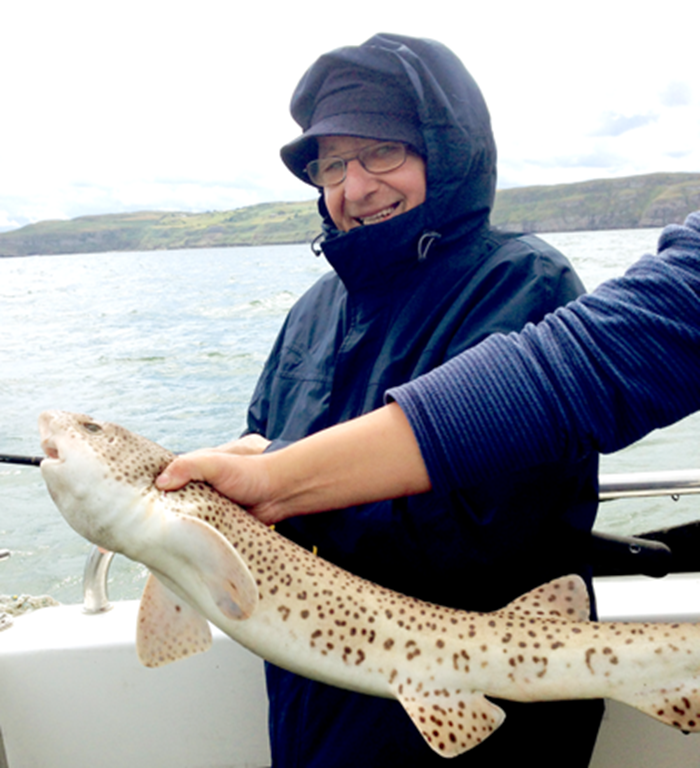 John joined the Army in 1947 and spent 23 years serving with the 4/7 Royal Dragoon Guards. After leaving the Army, he worked at the National Grid for 22 years. Years on, John noticed a problem with the sight in his left eye and was diagnosed with age-related macular degeneration in 2006.

Because of his time in service, John was eligible for support from Blind Veterans UK, but didn’t realise this until last year when a friend encouraged him to get in touch. At the start of this year, John started to receive vital support to help him adjust to life with sight loss.

John said: “Blind Veterans UK has renewed my life in a lot of ways. As well as helping me to fish again, they’ve helped me at home. I couldn’t read my newspaper before, so when I visited the centre for the first time I was given a CCTV magnifier which now means that I can put my newspaper underneath and read it again.

I also attended the annual lunch event that Blind Veterans UK held in Liverpool which was really good. While I was there, I spoke to one of the staff about a keyboard with large keys for my laptop at home, they provided me with one and I can now sit and type away all day! It’s really helped me to regain my independence.”

Blind Veterans UK knows that there are tens of thousands of blind and vision impaired ex-Service men and women now battling severe sight loss, but that don’t realise that they are eligible for support. The charity is asking eye health professionals to ensure they ask patients with sight loss if they have a service history and if they do, to encourage them to contact the charity.

For more information about Blind Veterans UK’s No One Alone campaign, or to refer a veteran to the charity for support, call 0800 389 7979 or visit
www.noonealone.org.uk