Part 2 of this topic can be found here

Inherited Retinal Disease (IRD) is the leading cause of blindness certification in the working age population (age 16-64 years) in England and Wales and the second most common in childhood [1]. The term IRD incorporates a large group of disorders that are clinically and genetically heterogeneous [2].

IRDs may be sub-categorised in several ways including: (i) according to photoreceptor involvement, for example, rod or cone; when both are involved the nomenclature reflects the order in which the photoreceptors are affected, for example, rod-cone dystrophies affect the rods prior to the cones. Also by (ii) natural history – stationary or progressive disorders; (iii) isolated macular or generalised retinal involvement; and (iv) isolated ocular or additional systemic manifestations (syndromic) [3].

IRDs may be inherited in an autosomal dominant (AD), autosomal recessive (AR) or X-linked (XL) manner. IRDs are genetically diverse and complex. While certain phenotypes can be caused by disease-causing sequence variants in different genes, mutations within the same gene can result in varying phenotypes [4], with marked inter- and intra-familial variability being commonplace [3]. This, together with the large number of genes that have been identified in IRDs (>300), can result in significant diagnostic challenge.

Well-characterised IRDs and those subject to / anticipated to be subject to clinical trial will be described below. 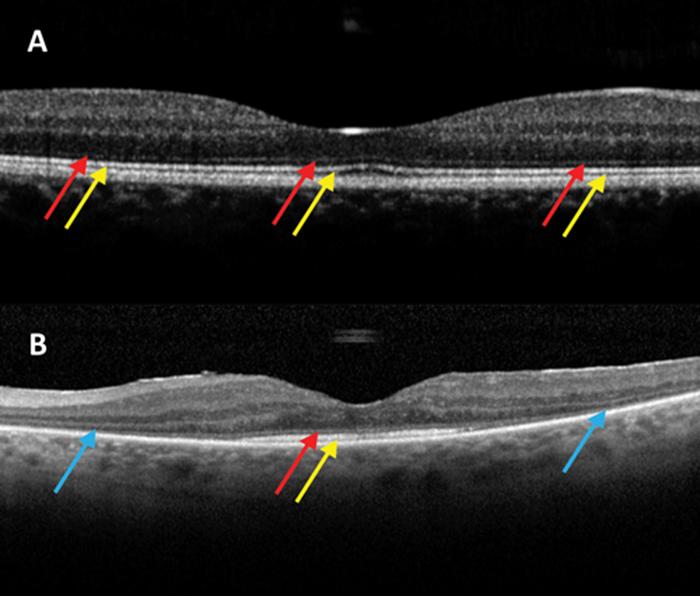 Retinitis pigmentosa (RP) represents a group of disorders which are the most common IRD, with an incidence of approximately one in 3000 in the USA and Europe [3,5]. RP is a clinically variable rod-cone dystrophy, characterised by nyctalopia, and progressive visual field loss initially, with central visual involvement later in the disease process (Figure 1). Clinical examination is characterised by bone-spicule retinal pigmentation, generalised vascular attenuation and optic disc pallor.

RP is a genetically heterogeneous disorder with over 60 genes currently known to cause RP [6,7]. The most common inheritance pattern is autosomal recessive (AR; 30-40%), with mutations in the gene USH2A being the most common cause [8]. AD inheritance occurs in 20-30% of RP, with mutations in the Rhodopsin (RHO) gene being the most common [8]. XL RP occurs in 15-20%, with mutations in the RP GTPase regulator (RPGR) gene accounting for the vast majority [8]. There is no known family history in 40-50% of patients at presentation [9]. XLRP and ARRP are the most severe forms of RP with onset often in childhood. ADRP is milder and often of later onset. Digenic RP is rare and is caused by disease-causing variants occurring in both PRPH2 and ROM1 [8].

Multiple avenues of research are being explored in RP including gene and stem cell therapy, pharmacological approaches and artificial vision, with on-going or anticipated clinical trials [11-13].

Patients present at birth or early infancy with severe visual impairment, nystagmus and amaurotic pupils [5,16]. Other symptoms and signs may include photoattraction or photophobia, nyctalopia, the oculodigital sign, keratoconus and cataract [16]. LCA can be isolated (most common) or syndromic, e.g. Joubert and Senior-Loken syndrome. Fundus examination ranges from a normal appearance especially at presentation, to marked maculopathy, white retinal dots and bone-spicule pigment migration [16].

Electroretinography is typically non-detectable or severely reduced in LCA [16]; and is helpful in distinguishing between other causes of congenital / early-onset nystagmus and reduced visual behaviour, including achromatopsia, congenital stationary night blindness and albinism.

Gene therapy-based clinical trials are on-going or planned in the near future for several genetic forms of LCA including RPE65, MERTK, CEP290, AIPL1 and GUCY2D [13,17,18].

Stargardt disease (STGD) is the most common inherited macular dystrophy, with a prevalence of one in 10,000 [19], and is caused by recessive sequence variants in the ATP-binding cassette transporter (ABCA4) gene. STGD is characterised by toxic accumulation of lipofuscin and related products including the bis-retinoid N-retinylidene-N-retinylethanolamine (A2E) within retinal pigment epithelium (RPE) cells, resulting in RPE cell dysfunction / death, with subsequent photoreceptor cell dysfunction / loss. 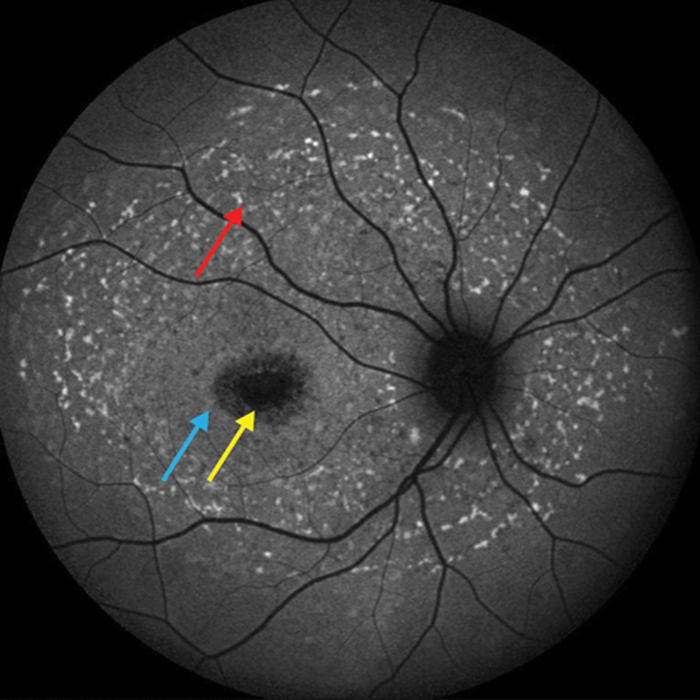 Over 900 disease-causing sequence variants have been identified in ABCA4 to date, resulting in marked phenotypic heterogeneity including variable age of onset and severity [19,20]. Typical presentation occurs during the first or second decade of life with bilateral central visual loss and dyschromatopsia. Earlier onset (childhood-onset STGD) is associated with a worse prognosis and more severe ABCA4 sequence variants, compared to later onset (adulthood-onset STGD and foveal-sparing STGD) [13]. Fundus appearance may be normal in the early stages, with development of increasing macular atrophy / bull’s-eye maculopathy, and yellow-white flecks at the level of the RPE which are associated with characteristic areas of increased and decreased autofluorescence (Figure 2), which changes over time. Spectral-domain optical coherence tomography (SD-OCT) shows loss of outer retinal architecture at the central macula [21].

Multiple avenues of intervention are currently being explored, including gene therapy, stem cell therapy and pharmacological approaches, with on-going clinical trials in all three areas [13,21].

Achromatopsia (ACHM) is an autosomal recessive cone dysfunction syndrome [24]. Disease-causing sequence variants have been identified in five genes that encode components of the cone-specific phototransduction cascade (CNGA3, CNGB3, GNAT2, PDE6C and PDE6H) [25-30], and also ATF6, which has a role in the maintenance of the endoplasmic reticulum and cellular homeostasis [31]. CNGA3 and CNGB3 account for approximately 70-80% of patients with ACHM [24].

ACHM has a prevalence of one in 30,000, with presentation at birth or early infancy with poor central vision, pendular nystagmus, marked photophobia / photoaversion and reduced or absent colour vision [32,33]. Patients prefer mesopic conditions and have normal night vision. Two forms exist – complete and incomplete – patients with incomplete ACHM retain residual cone function and thereby have residual colour vision and mildly better VA [33,34]. ACHM may be progressive, however, the changes that occur are slow and subtle in most patients, and does not correlate with age or genotype [35]. 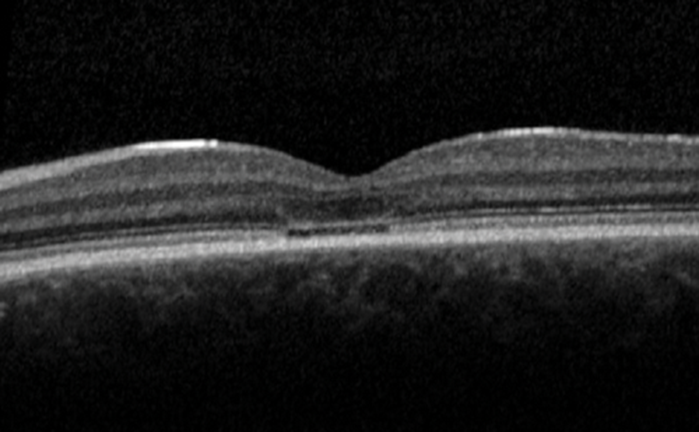 Figure 3: OCT image centered on the macula taken from a patient with achromatopsia. This image demonstrates the presence of a foveal hyporeflective zone.

Successful rescue of multiple small and large animal models of CNGA3 and CNGB3 associated ACHM have led to on-going and anticipated gene replacement clinical trials for both forms of ACHM [13,35].

X-linked retinoschisis (XLRS) affects 1:5,000-1:20,000 [37], and is caused by disease-causing sequence variants in the gene RS1, with over 200 variants identified to date. The encoded protein, retinoschisin, is secreted and binds to both photoreceptors and bipolar cells to help maintain the integrity of the retina [32]. While penetrance is complete, clinical expression is highly variable.

Figure 4: OCT image centred on the macula taken from a patient with x-linked retinoschisis. A: spokewheel-like maculopathy. B: typical macular schisis as seen at the level of the green line observed in A.

The visual prognosis is variable but relatively good in childhood as long as retinal detachment or vitreous haemorrhage does not occur. Central vision may deteriorate slowly in adulthood with development of macular atrophy in the fourth to sixth decade [19].

Imaging techniques such as SD-OCT, fundus autofluorescence (FAF) imaging and adaptive optics scanning laser ophthalmoscopy (AOSLO) provide enhanced assessment of retinal architecture and have proven invaluable in the diagnosis and monitoring of IRD [21]. These techniques allow for earlier detection of changes in retinal structure and more sensitive monitoring of progression than clinical examination alone.

SD-OCT is a non-invasive rapid technique allowing qualitative and quantitative analysis of retinal lamination. It has allowed the ready detection of disease in childhood where delay in diagnosis is common due to the often subtle signs on clinical examination in early stages – including childhood-onset STGD and XLRS. External limiting membrane thickening prior to the development of outer retinal loss in STGD has been detected in children as young as five years of age using SD-OCT [39]. Measurement of ISe width or area has also been shown to be a reliable and reproducible measure of progression in RP and will likely be used as a metric in planned clinical trials [11].

FAF imaging uses the autofluorescent properties of lipofuscin and related metabolites to detect their presence within RPE cells [21]. Increased autofluorescence represents RPE cells with greater amounts of lipofuscin, whereas reduced autofluorescence represents lower levels of RPE-containing lipofuscin and / or RPE/photoreceptor cell loss or atrophy. Characteristic FAF patterns can be seen in several IRDs, which aid diagnosis including STGD and PRPH2-associated retinopathy. FAF imaging can also be useful in monitoring progression either by accurately detecting atrophy enlargement over time, e.g. STGD [21], or documenting the change in size of perimacular rings of increased signal that can be seen in, for example, RP [11].

AOSLO is a high-resolution non-invasive technique that makes use of scanning laser ophthalmoscopy to visualise the photoreceptor and RPE mosaics in vivo. The ability to directly visualise the cells being targeted with novel therapies including gene replacement is transformational and will allow improved determination of participant suitability and selection for intervention, and thereby clinical trial design and the likelihood of detecting safety and efficacy signals robustly and sensitively [11,21,24].

Visual field testing (VFT) is a non-invasive technique used to detect central and peripheral visual field (VF) defects, thus contributing to the diagnosis and monitoring of IRD. Perimetry employs the use of stimuli of varying size and luminance to test specific areas of the visual field and can be presented in a static or kinetic fashion. Using a systematic approach, these tests can be repeated to look for progression of IRD over time.

Microperimetry (MP) makes use of central visual field testing whilst simultaneously observing each point of retinal stimulation [40]. In this way, it is possible to compare retinal morphology with visual function. There is evidence that retinal sensitivity in the macula correlates well with outer retinal thickness in RP [40]. This, together with literature suggesting that retinal sensitivity is related to quality of life [41], supports the use of MP in the evaluation of IRD.

The ‘Hill-of-Vision’ (HoV) is a function of retinal sensitivity based on information acquired from VFT and MP. Visual Field Modelling and Analysis (VFMA) is an innovative software currently being used to create detailed HoV maps that allow for a more thorough assessment by using all available retinal sensitivity data, and thereby arguably more sensitive and reliable measure of change over time which will be valuable both for IRD clinical practice and clinical trials [42].

Inheritance patterns may be determined by careful construction of a pedigree; however, molecular genetic testing can provide confirmation of mode of inheritance together with identification of the specific underlying causative gene and sequence variant(s). This is particularly useful when clinical diagnosis is uncertain, for example, in conditions with marked phenotypic variability. It also aids better informed genetic counselling, advice on prognosis and potential participation in studies and clinical trials.

Single gene testing is useful for conditions with strong phenotype and genotype correlations, for example, XLRS and STGD [43]. Next-generation sequencing (NGS) allows for large numbers of genes to be sequenced simultaneously. This technique is employed for large gene panel testing, which is more appropriate for conditions such as RP where a large variety of genes can be responsible [43,44]. Currently multi-gene panel testing and directed single gene screening enables a molecular diagnosis to be confidently made in 50-60% of IRD cases [3]. Higher detection rates are possible with research-based methodologies such as whole exome and whole genome sequencing. 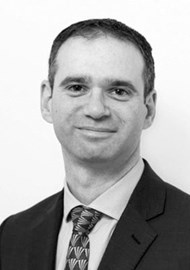