A pituitary tumour from 1927
By James F (Barry) Cullen

It is not often in the course of a clinical career that one gets the opportunity to review a patient who had been treated by a pioneer neurosurgeon some 60 years previously; this was however the case when Miss GA age 71 was referred to my clinic in 1988. She had recently visited an optometrist when on fundus examination her optic discs were thought to be cupped and glaucoma suspected.

My clinical examination in 1988 was unremarkable with no evidence of glaucoma and normal visual fields, but on questioning the patient further she told me she had been operated upon for a ‘brain tumour’ at 10 years of age in 1927 by Prof Norman Dott (1897-1973). This information was of particular interest to me as I had been interviewed by the same Professor Dott in 1962 shortly after coming to Edinburgh, and invited by him to conduct a weekly clinic in his department of surgical neurology (DSN) at the Edinburgh Western General Hospital.

I had heard that Professor Dott kept meticulous records of his early cases following his return from Boston in 1924 [1]. I therefore sought the assistance of the archivist of the Edinburgh Royal Infirmary (where Prof Dott had first established his department), and we retrieved a folder containing the records of Miss GA dating from 1927. Fortunately, I had the main components of these records photographed because when they were later withdrawn from the archives at the time of the writing of Prof Dott’s biography [2]; the folder was not returned. 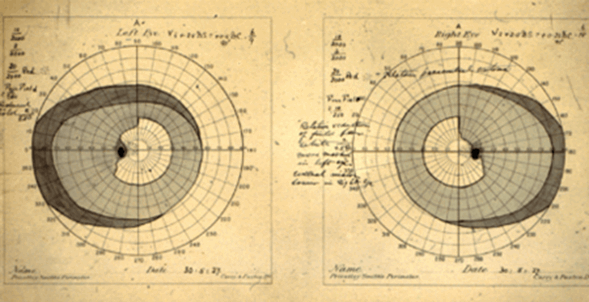 In 1927 Miss GA was diagnosed with a pituitary tumour on the basis of her clinical history of persistent headache, a skull x-ray and visual fields demonstrating a bitemporal hemianopia (Figure 1). These were charted by Dr Arthur Sinclair (1868-1962) who introduced Bjerrum screen perimetry into the UK in 1925 on his return from Denmark where he had observed it in the clinics of H Ronne and JP Bjerrum [1].

Prof Dott also recorded optic disc cupping on direct ophthalmoscopy which he considered congenital, this diagnosis being confirmed 61 years later when I examined her and the photographs (Figure 2) were taken. So much for modern OCT etc. and how many neurosurgeons now use an ophthalmoscope?

A diagnosis of “intrasellar chromophobe adenoma” was recorded in the records and “a trans-sphenoidal operation” decided on. The operation was performed at 19 Great King Street, Edinburgh a private nursing home in a converted Georgian terrace house on 19 June 1927 under general anaesthesia with “chloroform induction followed by intra-pharyngeal ether through mouth gag”. The typed description of the procedure runs to two full pages, the approach being via the frenum of the upper lip along the nasal septum into the sphenoidal sinus and pituitary fossa. It is stated that the operation was “rendered a little difficult by the very meagre access afforded”, but eventually the tumour was exposed, was noted to be of tough spongy consistency and fragments removed. The operation’s duration is not recorded but the patient “was returned to bed afterwards in excellent condition”. She was discharged after 12 days “very bright and getting about freely”. 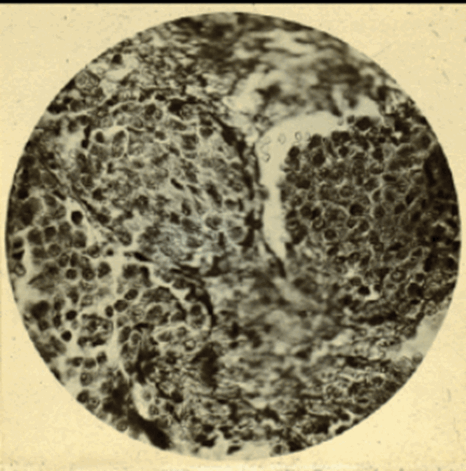 Figure 3: Photomicrograph of the pituitary adenoma reported from the Royal College of Physicians
of Edinburgh Laboratory sent to Prof Dott on 22 June 1927 three days post operation.

A pathological report dated 22 June (three days post operation) from the Royal College of Physicians Laboratory confirmed the diagnosis of pituitary adenoma, and photomicrographs were sent with the report (Figure 3); note the report was given three days following receipt of the specimen (how long does this take today.)

Postoperative radiotherapy was arranged and carried out from 13 to 27 July 1927, following which the child’s headaches resolved. Visual field charts dated 30 October 1927 (Figure 4) showed that the preoperative bitemporal defect had resolved. 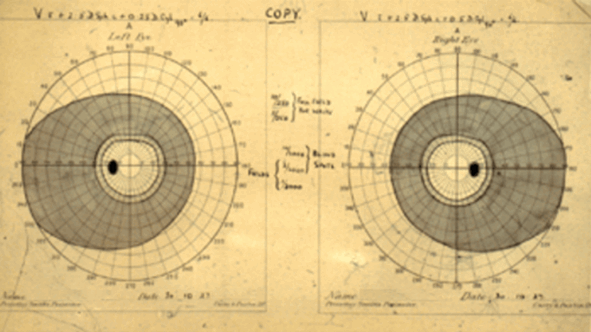 The patient apparently remained well until late June 1928 when her headaches returned and recurrence of the tumour was therefore suspected. Accordingly, in October 1928 radium needles were inserted trans-nasally into the pituitary fossa, see Figure 5 and note the substantially enlarged pituitary fossa on the x-ray. 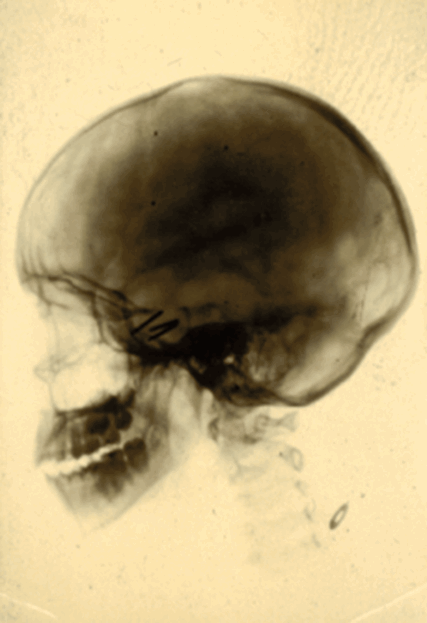 The patient was then reported to have been well for three years but in late 1931 her headaches again returned and although there was no visual field defect recorded it was decided that the pituitary region required exploration and accordingly a trans-frontal craniotomy was proposed and carried out on 31 January 1932.

The trans-frontal exploration in this girl then between 14 and 15 years of age was again performed at the nursing home in Great King Street and the typed description of the operation runs to three pages.

Comments of the preoperative evening and morning of operation were: “The patient was rather apprehensive and Mrs A no more less so. On the previous evening therefore Nembutal gr.1 ½ was given (to both?) and patient went to sleep promptly. On wakening at 7.30 the following morning she was given 4 grs of luminal by mouth and remained very sleepy until 10.30 when general anaesthesia was induced with open ethyl chloride and ether followed by a rectal ether injection which was well retained. “This gave a very smooth and satisfactory anaesthesia during the 3 hours 50 minutes which the operation occupied”.

It is not easy for us today to picture the scenario described above which took place 90 years ago in a converted Georgian house in Edinburgh, but we can imagine the apprehension of the child and her mother, the skill of the anaesthetist, a Miss Wood, not to mention the expertise of the surgeon over the almost four hours of this operation.

Further extracts from the operation report are as follows: “The usual coronal incision extending from temple to temple was utilised… As the right frontal lobe was gently elevated the right optic nerve came into view it was quite a healthy looking nerve…as the arachnoid was gently torn away the bulging upper surface of a pituitary tumour came into view, tumour was of a rather dark chocolate colour and felt cystic. A needle was inserted and its contents aspirated, the contents proved to be old haemorrhagic material…little further dissection brought the left optic nerve into view…the chiasm was stretched though not excessively so, it tended to be of the prefixed variety and there was but little space in between it and the two optic nerves…the cyst walls were treated by the insertion into the cavity of pledgets of cotton wool moistened with Zenker’s solution great care being exercised to protect the optic nerves from this material…the cyst cavity was seen to occupy completely the distended sella turcica… The gross appearances certainly suggested degeneration cyst in a tumour which had been destroyed by x-rays, radium etc…nothing resembling soft tissue tumour was encountered”…finally “an absolutely dry field having been obtained I withdrew”. 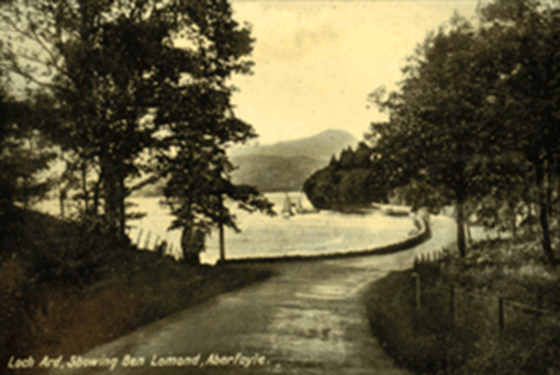 Figure 6: The postcard sent by the young patient to Prof Dott while on holiday following her operation.

Among other papers in the folder were a copy of Prof Dott’s bill for 100 guineas, correspondence with the Pasteur Institute in Paris concerning growth hormone availability, and a postcard from the girl sent from the Scottish Trossachs (Figure 6) indicating that she was well and had played golf with her parents in the morning. 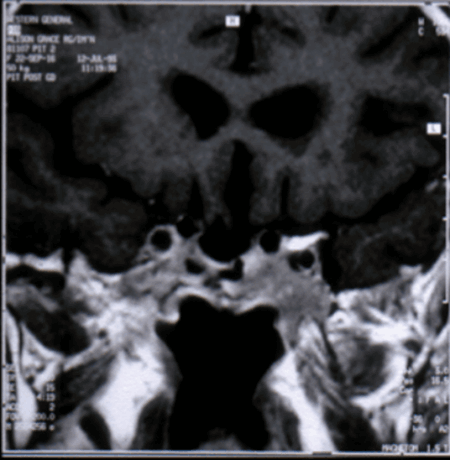 My investigations in 1988 included a MRI scan which showed an empty sella and normal ventricular systems (Figure 7). The prolactin level was >4800 and on discussing this and other aspects of the case with our then Professor of Neurosurgery Professor Douglas Miller (1937-1995) he said “what do you think Zenker’s solution might do to the hypothalamus?” and advised no further investigation noting that the patient at this stage some 60 years post diagnosis was entirely symptom free. 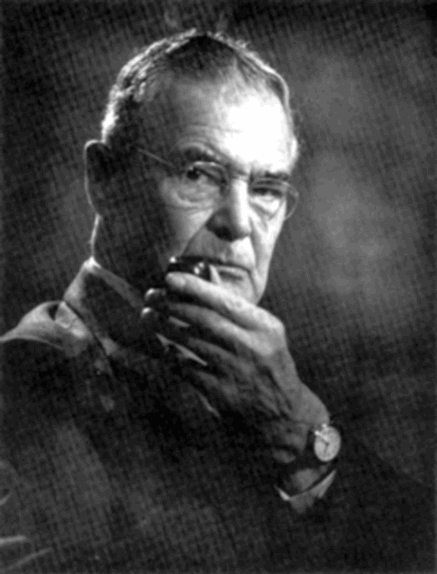 Figure 8: “Study of Prof Dott by Miss GA the photographer on whose pituitary he had operated.”
From: With Sharp Compassion – Norman Dott Freeman Surgeon of Edinburgh, Figure 79 [2].

In adult life the patient became a local society photographer and studies (Figure 8) taken by her of Prof Dott are published in his biography [2].

I followed her up for six years until I retired in 1994 and later noticed her obituary in The Scotsman newspaper in 2001 (Figure 9). 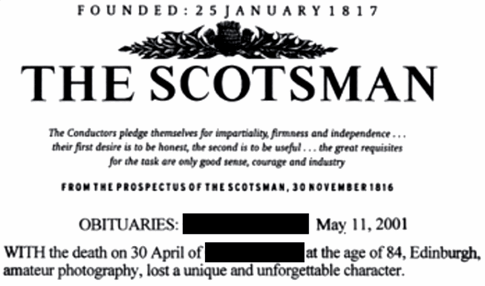 Figure 9: Obituary notice for Miss GA from The Scotsman newspaper May 2011.

Footnote: Zenker’s solution is made up of mercuric chloride, potassium dichlorate and sodium sulphate in distilled water to which acetic acid is added before use.