IN FOCUS - Prevention and treatment of blindness worldwide: the story of ‘VISION 2020: The Right to Sight’
By Hannah Faal

Of interest is the connection between wars, mass population movements and the spread of communicable eye diseases. In the 18th century, Napoleonic troops from the war in Egypt spread trachoma across Europe. Mass immigration in the 19th and 20th centuries brought trachoma to America, affecting the indigenous population. In World War II, the number of recruits from West Africa who had visual impairment alerted the medical community to onchocerciasis (river blindness).

The response of sighted people to blindness has evolved over time. The charity approach was the earliest and still persists in some populations. The industrial revolution and the need for personnel in World War II facilitated inclusion of blind people into the workforce. In post-war socialist Britain, organisations of blind people were formed to fight for the rights of persons with disabilities, and organisations for the welfare of blind people provided services including vocational training. In Africa, training was customised to rural agricultural and trades skills and the concept of community-based rehabilitation was born.

The education of blind children started in special schools and later, children with visual loss were integrated into mainstream education. The International Federation of the Blind and the World Council for the Welfare of the Blind merged to become the World Blind Union in 1984.

The presence of colonial powers and colonies meant that large swathes of the world could have uniform interventions from one government structure, e.g. the Commonwealth countries and the francophone territories. After World War II the need for development was high. This prompted the formation of non-governmental organisations (NGOs) that could fundraise, undertake projects, form national societies and advocate with national governments and global agencies.

A prime example was the British Empire Society for the Blind launched in 1950, later to become the Royal Commonwealth Society for the Blind, led by Sir John Wilson for over 30 years – today known as Sightsavers [1]. Similar bodies were present in France, the USA and Canada. Others were religious bodies, the prime example being Christoffel Blindenmission (CBM) [2] formed in 1908 in Germany and one of the leading international development organisations for persons with disabilities.

The United Nations system and its agencies including the World Health Organization (WHO) were formed in 1948. These agencies adopted a twin track approach, with one focus on disabilities and another on the causes of disability and its prevention. In the 1950s and 60s the WHO set up expert committees on rehabilitation of disabled people and in the 1970s it developed the conceptual framework of prevention. From the 1970s, UNICEF took on the prevention of blinding malnutrition through the distribution of Vitamin A, focusing on Asia, the Middle East, Africa and parts of South America.

In 1976 the WHO policy and strategies for Disability Prevention and Rehabilitation was published [3]. The International Year of Disabled Persons was launched in 1981 [4] and was followed by the UN Decade of Disabled Persons 1983-1992 [5]. The UN published ‘Standard Rules on the Equalization of Opportunities for Persons with Disabilities’ in 1993 [6].

It 1991 it was stated that the underlying cause of disability was poverty; disability and blindness were linked to the economics of populations and nations. The thread that ran through all the work on disability was the concept of the rights of persons with disabilities.

The World Health Organization and blindness

Soon after its establishment, the WHO engaged with global blinding eye diseases through field and laboratory research. The result was an increasing awareness of blindness from conditions such as trachoma, cataract, vitamin A deficiency, smallpox, leprosy and onchocerciasis. In 1962, World Health Day focused on prevention of blindness. In 1975 the first resolution on prevention of blindness was passed at the World Health Assembly. Available data gave an estimate of 10-15 million blind people and highlighted the need for more data. A WHO study group established definitions for visual impairment and blindness and a classification of eye diseases.

In 1976, the theme for World Health Day was ‘Foresight Prevents Blindness’ and the WHO established a Prevention of Blindness programme. Dr Bjorn Thylefors subsequently led the programme from 1980 to 2000, including the launch of ‘VISION 2020: The Right to Sight’ in 1999. In 1978 he set up a Task Force to address the long-standing need for reliable scientifically-accepted data on the magnitude and causes of blindness. A global estimate of blindness was made: using the definition of blindness as less than 3/60 vision, there were 28 million blind people, and using less than 6/60 vision there were 42 million.

A target was set to reduce blindness in ALL countries to less than 0.5% of the population and less than 1% in any one community. A formula was developed which linked blindness rates to blinding diseases and to the stage of economic development of countries. A blindness rate of 1% represented least-developed countries with, for example, endemic trachoma, foci of xerophthalmia and / or onchocerciasis, and insufficient eye care services, particularly for cataract surgery.

In 1978, the Declaration of Alma-Ata was adopted at the International Conference on Primary Health Care. It was the first international declaration highlighting the importance of primary healthcare, with the aim of achieving the goal of ‘Health for All’ by the year 2000. The WHO Prevention of Blindness programme immediately adopted it, with primary eye care as a specific component of primary health care.

Strategies were designed for specific blinding diseases: Vitamin A distribution for blinding malnutrition; immunisation for measles; cataract surgery in outreach camps; onchocerciasis control by larviciding (later community-based mass ivermectin distribution); trachoma control moved forward with a number of developments, i.e. a simplified grading scheme and the community-based ‘SAFE’ strategy (surgery for trichiasis, antibiotics, facial cleanliness and environmental improvement) [8]. The donation of drugs, ivermectin by Merck Inc in 1987 (“as much as needed for as long as needed”) [9], and azithromycin by Pfizer in 1999, revolutionised trachoma and onchocerciasis control programmes [10].

Cataract had been identified by WHO as the leading cause of blindness. Technological advancements in the early 1990s including affordable intraocular lenses and the advent of low-cost portable operating microscopes (microsurgery) provided the impetus for an increase in the numbers, and quality of outcomes, of cataract surgery.

International Agency for the Prevention of Blindness

At the International Council of Ophthalmology meeting in Paris in 1974 a request was made for a new agency to be created to bring together all stakeholders in prevention of blindness. The outcome was the launch in 1975 of the International Agency for the Prevention of Blindness (IAPB) [11], a membership body for international NGOs, ophthalmology organisations, organisations of and for blind people, scientific disciplines other than ophthalmology, and individuals. IAPB had an official relationship with WHO, i.e. it could speak at the World Health Assembly and the WHO Executive Board, which were opportunities for advocacy. Its role was to coordinate action on a worldwide scale and to be the catalyst and lever to advocate for services for people with visual loss. 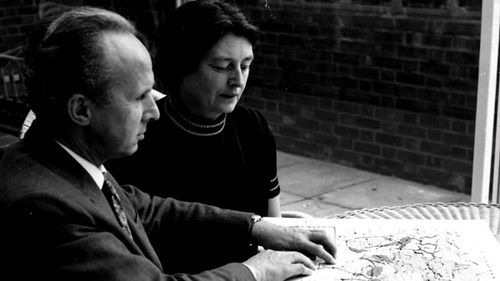 In 1994, a Task Force consisting of WHO, IAPB and a group of four NGOs was set up. It worked for several years to prepare the foundation for the Global Initiative to Eliminate Avoidable Blindness. Public relations experts were involved to create awareness with a logo and key messaging materials, and in 1999, the Director General of the WHO launched ‘VISION 2020: The Right to Sight’. In the heady ending of the millennium, the VISION 2020 logo, its message and training packages assisted its quick spread and adoption across regions and countries. The ‘Right to Sight’ linked the initiative’s roots in disability. It was the next step after decades of individual disease control programmes. It brought together governments, NGOs, professional bodies and the pharmaceutical / eye care industry in a unique global partnership.

Sir John Wilson, from whose biography by John Coles [12] much of this article is drawn, had already referred to the need to break the link between population growth and blindness, and between blindness and ageing. His focus was the “individual going blind quietly by him / herself”. His wish was that national governments in low-income countries would take ownership for the eye care of their people. Post 2020, these challenges remain. University of Calabar, Nigeria; President of the International Agency for the Prevention of Blindness (IAPB) 1999-2004.