I have been working in ophthalmology for over five years as a photographer and research co-ordinator, and it is fascinating, rewarding, and interesting to learn all about the different diseases associated with the eye. One condition that has been a particular favourite is sickle cell disease and why screening is so important to prevent visual loss for the patients.

Sickle cell disease (SCD) is a globally important condition usually associated more commonly with people of African descent, but can also be found in those people of Indian, Mediterranean, or Middle Eastern, South and Central American descent. In the UK, it is now the most common newly inherited disease which estimates that there are now 15,000 affected people [1].

Sickle haemoglobin carries oxygen normally, but there is a mutation in the beta (β) chain, so that the haemoglobin can polymerise when deoxygenated which results in red cell breakdown and aggregation of red cells in the blood vessels thereby causing a blockage, which in turn leads to ischaemia and tissue damage [1,2].  SCD is associated with chronic anaemia and episodes of recurring acute pain and fatigue. Further complications include renal/lung disease, stroke, pregnancy loss, avascular necrosis of hips or shoulder joints, leg ulcerations and retinopathy [1].

Non-proliferative sickle retinopathy (NPSR) does not normally lead to visual loss unless the vaso-occlusive process involves the macula, and this can be picked up on an OCT or OCTA, which can detect macular ischaemia and loss of the capillary bed. Other features of NPSR include salmon patch-like haemorrhages (pinkish-red retinal haemorrhages), which when resolved can lead to coruscating spots (intra-retinal deposits of haemosiderin) or black sunbursts (patches of retinal pigment epithelial hyperplasia). Other findings include retinal vein occlusion, retinal arteriolar occlusion, dilated dark capillaries on the optic disc and andioid streaks. Proliferative sickle retinopathy (PSR) as the name suggests is more severe just like proliferative diabetic retinopathy. It is illustrated by the development of peripheral retinal neovascularisation, sometimes known as ‘sea fans’, and can develop visual loss from a vitreous haemorrhage and/or retinal detachment [3].

At the Newcastle upon Tyne Hospitals NHS Foundation Trust, we have developed a screening programme to make it easier for patients to attend. Previously, patients would not attend for their eyes to be screened as we used to do visual acuity, dilate them, and then photograph them by just doing a wide-field Optos image. Patients were put off by having dilation, as sickle cell does cause acute pain, made worse if the patient is already suffering. We only saw 5% of the 43 patients currently registered with ophthalmology. When a patient did attend, then once imaged, a report was then produced by James Talks (consultant ophthalmologist – medical retina) and sent to haematology.

Our screening programme was created in conjunction with Brigit Greystoke (consultant haematologist), Melanie Hall (haemoglobinopathy nurse specialist) and Mr Talks. Our imaging protocol was developed to include the patient’s visual acuity, OCT and OCTA of the macula using the Heidelberg Spectralis along with an ultra-wide-field colour Optos image, all of which can be done without dilation, is non-invasive and can be performed quickly without delaying the patient. Before coming to photography, the patient would be seen in haematology first, so everything is co-ordinated in one visit, therefore minimising repeated visits. We now screen over 85% of the patients.

Ultra-wide-field imaging up to 200ᵒ is proven as a sensitive tool and is far superior in comparison to a dilated fundus examination for detecting capillary occlusions associated with SCR [4]. It is very quick and makes an easier examination, especially for children, and allows for documentation. It allows for retinal vascular peripheral non-perfusion and macular ischemia/non-perfusion.

SD-OCT is quick and easy to acquire. It can lead to a better understanding of sickle cell maculopathy. One simple, fast scan is obtained on the Spectralis in the central macular. It can find temporal macular atrophy/inner retinal thinning which is thought to be related to occlusions in the deep capillary plexus.

OCTA is a highly sensitive method to diagnose sickle cell maculopathy and identifies vascular abnormalities before the onset of macular thinning. Its findings mainly in the temporal area can identify non-perfusion in the superficial and deep capillary plexus, irregularity or increase of the foveal avascular zone (FAZ), increased vascular tortuosity and vascular diameter, and shows a decrease in vascular density. 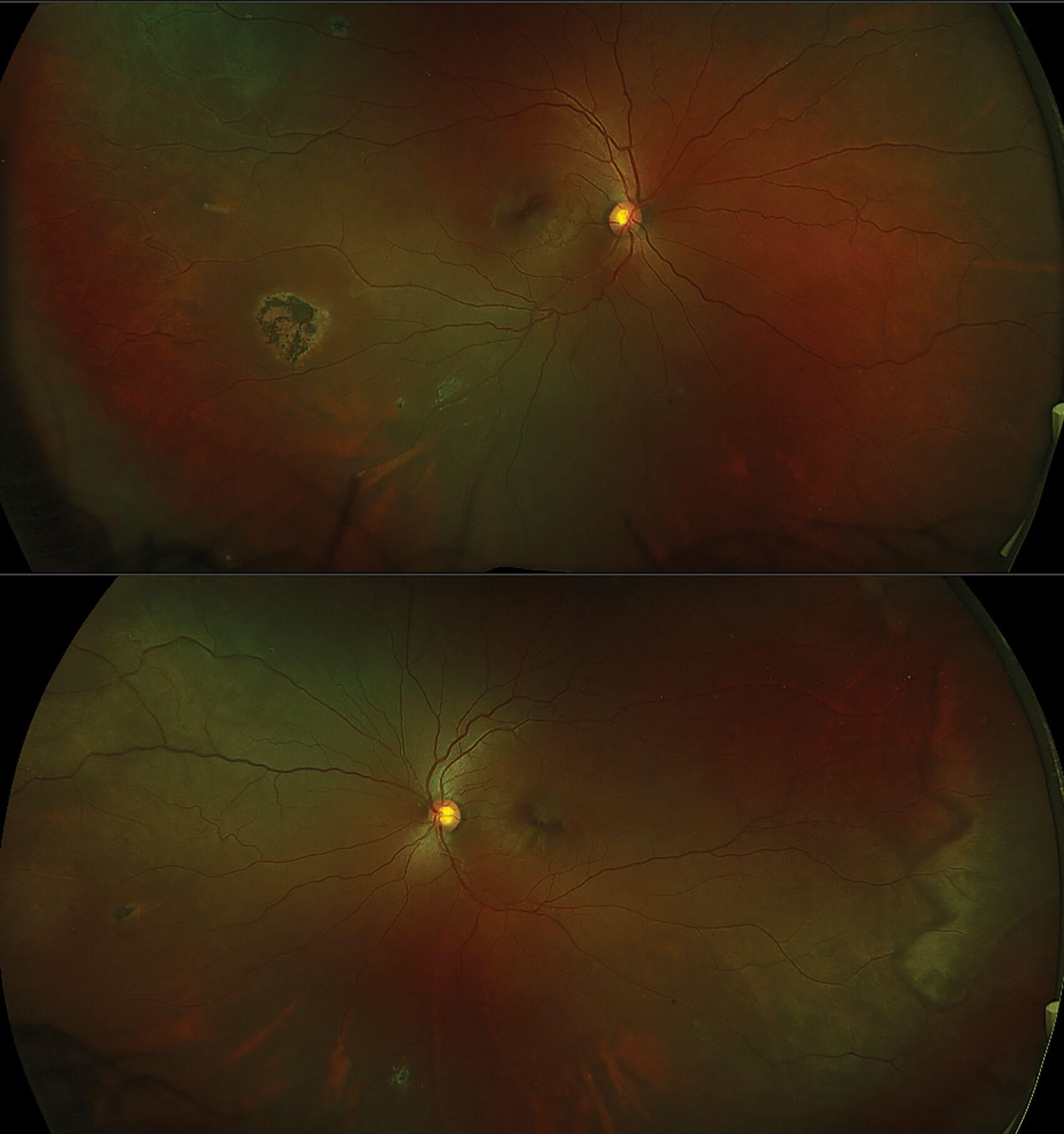 Figure 1 shows the RE and LE respectively of a wide-field colour image of a 36-year-old female with sickle cell anaemia, which is usually the most severe form of the disease. The visual acuity was 6/9 in RE and 6/6 in LE. In the RE, there are a couple of small coruscating spots (intra-retinal deposits of haemosiderin) resolved from retinal haemorrhages superiorly temporal and inferiorly. There is also a large patch of retinal pigment epithelial hyperplasia (black sunburst) temporally. In the superior temporal arcade, there is an area of ischaemia a vascular loop. In the LE, there are a couple of coruscating spots nasally and inferiorly, and a large area of ischaemia temporally, and a white without pressure sign illustrated by the zig-zag appearance. These wide-field images provide a good indicator of progression of the disease. 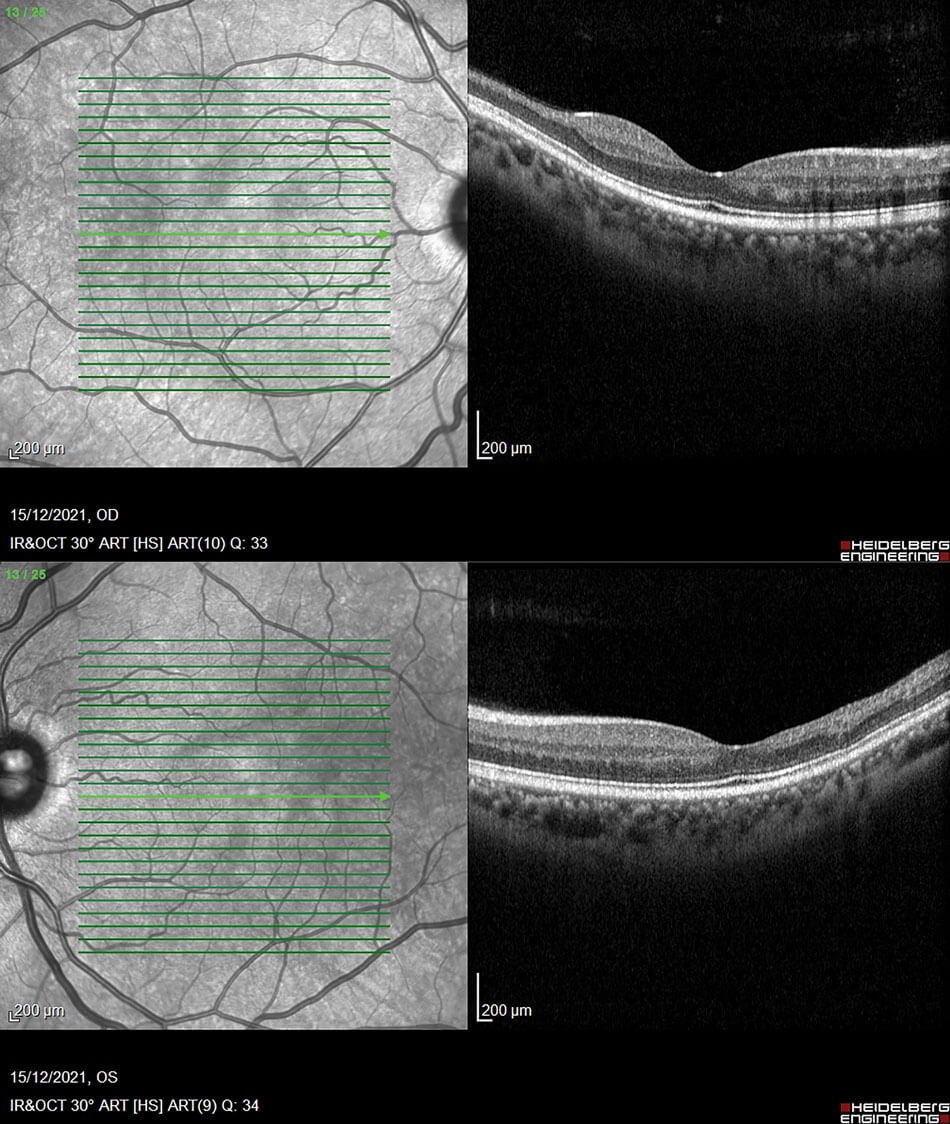 Figure 2: OCT’s of both eyes displaying macular thinning towards the temporal arcade and irregularity in the FAZ in RE. 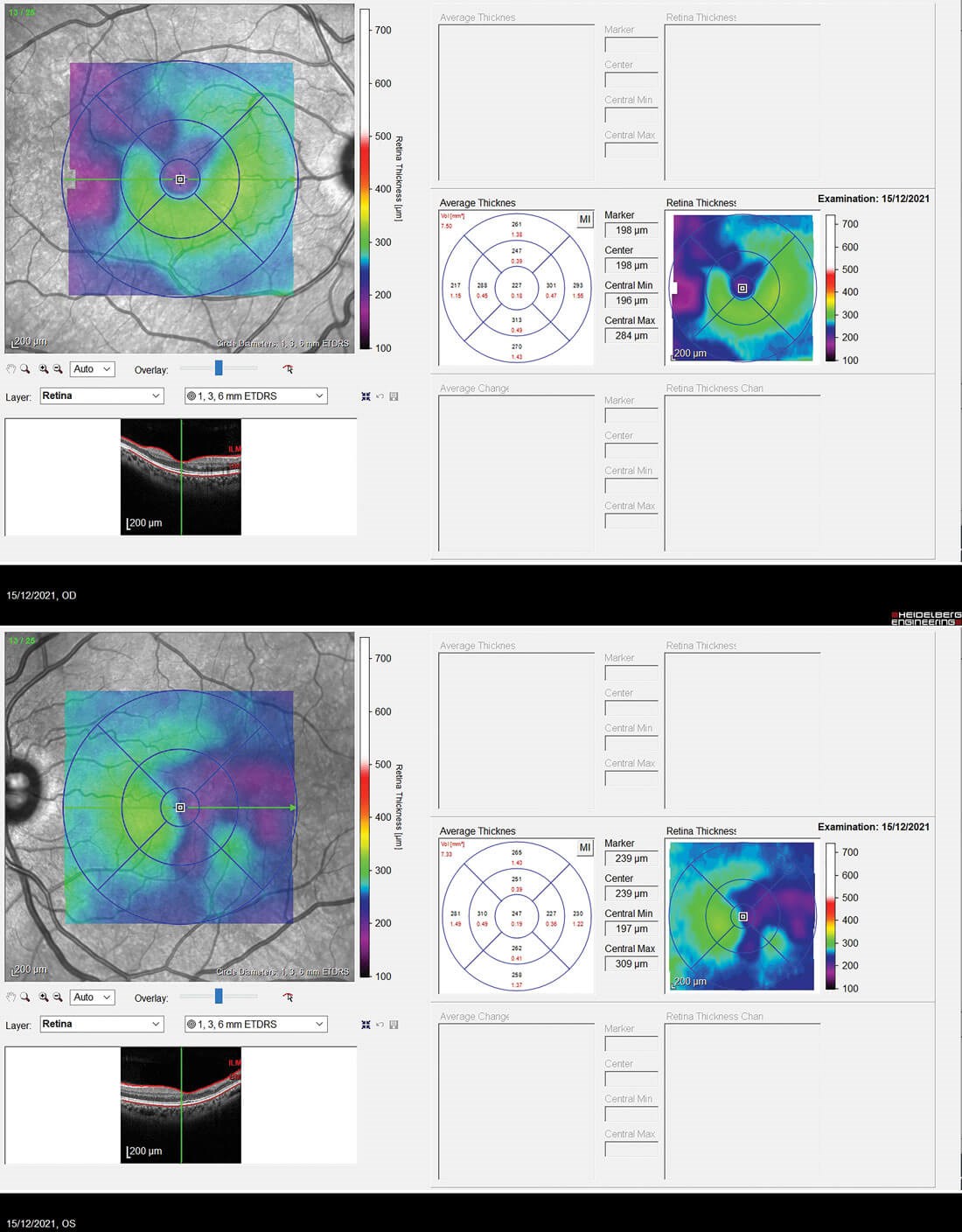 The OCT’s of the RE and LE are shown in Figure 2. Both eyes show macular thinning in the nerve fibre layer leading into the inner nuclear and plexiform layers. The RE demonstrates irregularity in the foveal avascular zone. This is highlighted by how the layers thin out from the fovea towards the temporal arcade which corresponds to the Optos images with the ischaemia. Figure 3 shows the retinal thickness maps, and this thinning can be seen easily from the maps illustrated by the violet colour and the differential in the patterned ripple indentation line. The OCTA’s in Figure 4 highlight some capillary dropout shown in the deep capillary plexus within the foveal avascular zone, which could lead to some visual loss. This area should show capillaries, but the blackened area indicates the dropout which ties in with the retinal thickness map. 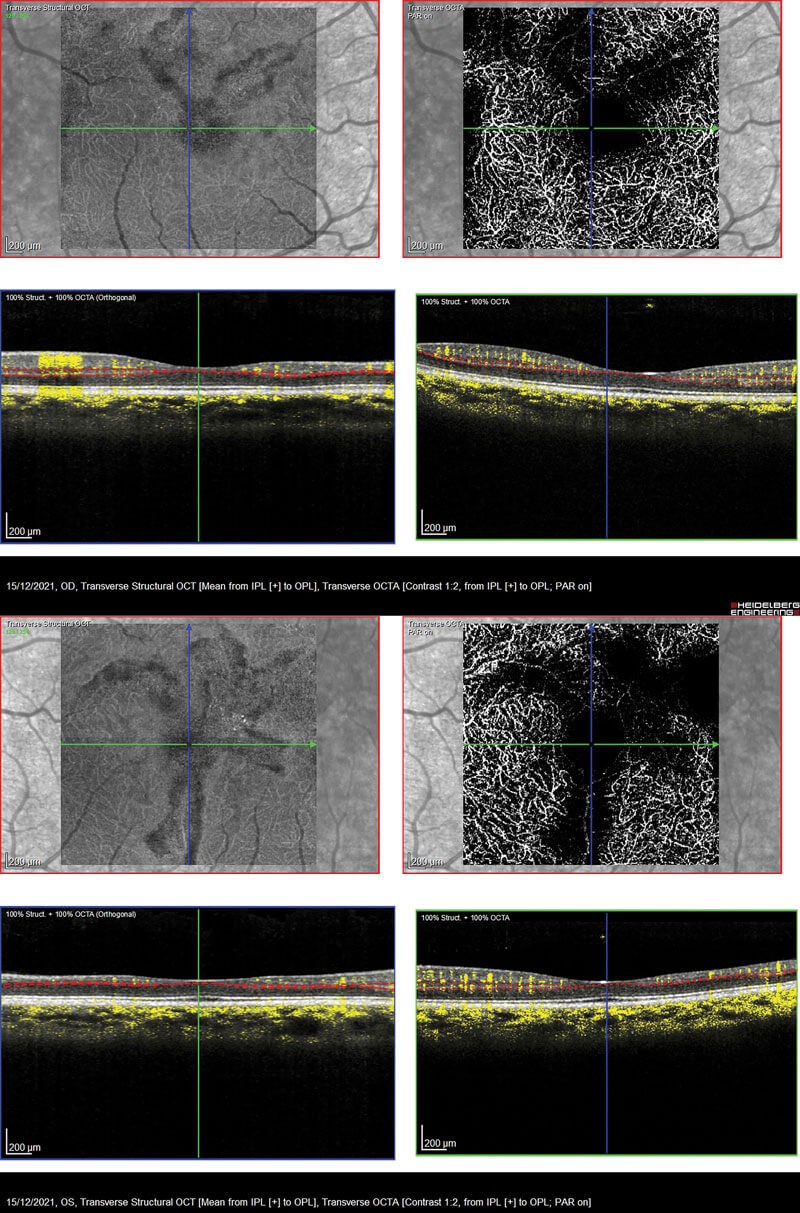 Figure 4: Both eyes showing capillary dropout within the foveal avascular zone
in the deep capillary plexus highlighted by the blackened area in the OCTA.

To conclude, our protocol works extremely well. From the example shown, this patient has not suffered any visual loss indicated by her visual acuity. Although there is some macular thinning and capillary dropout, the OCT’s and OCTA can be followed up and used to track any further changes. 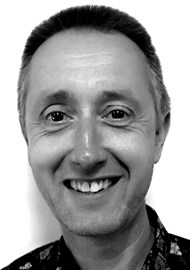