The paediatric cataract: an overview of the embryology and pathophysiology
By Samuel Augustus Fernando Aryee

In the first of the two articles (see Part 2 here) on paediatric cataracts, Samuel Aryee reviews the aetiology of this condition.

Cataracts arise from opacification of the natural transparent lens, which can cause partial or total blindness. Although the mechanism underlying the pathological processes of cataract formation is still being actively researched, the vast majority of cataracts can be treated very effectively.

Epidemiological studies also suggest a prevalence of between 1.2 and six cases per 10,000 infants worldwide [2], with their occurrence being either congenital or developmental. Cataracts are deemed congenital if they present within the first year of life while developmental cataracts occur after infancy or following trauma. It is difficult to determine the absolute timing of onset, and there is also a small degree of overlap between congenital and developmental cataracts. The variability in prevalence is largely down to socioeconomic factors in different parts of the world and the presence of other predisposing conditions such as intrauterine infection, malnourishment and metabolic disease which are more common in the developing world [3].

Treating the childhood cataract involves early diagnosis and prompt management in order to prevent irreversible sequalae. Complications of the unresolved paediatric cataract include strabismus, amblyopia and blindness [4,5]. The mortality rate is also found to be higher in blind children. However, this is hard to quantify numerically due to a lack of reliable surveillance. This is especially the case in developing countries where underlying systemic complications and lower socio-economic standing further impede the management of more complex needs amongst blind children [3]. These potential complications further stress the importance of early management of paediatric cataracts in order to reduce disability and the likelihood of childhood ‘blind-years’.

It is important to consider the complexity of the development of the human eye in order to better understand the pathophysiology of paediatric cataracts. Ocular development in utero begins roughly in the third week of gestation, lasting till the 10th week. Closure of the neural tube is essential for the optic vesicles to bud properly, and failure of this can also result in improper eye development. In particular, induction of lens growth occurs around four weeks gestation. The lens is derived from surface ectoderm, along with the eyelid and corneal epithelium. This is particularly interesting as other vital ocular structures such as the retina, ciliary body, iris and optic nerves are derived from neuroepithelium [6,7] (Figure 1). 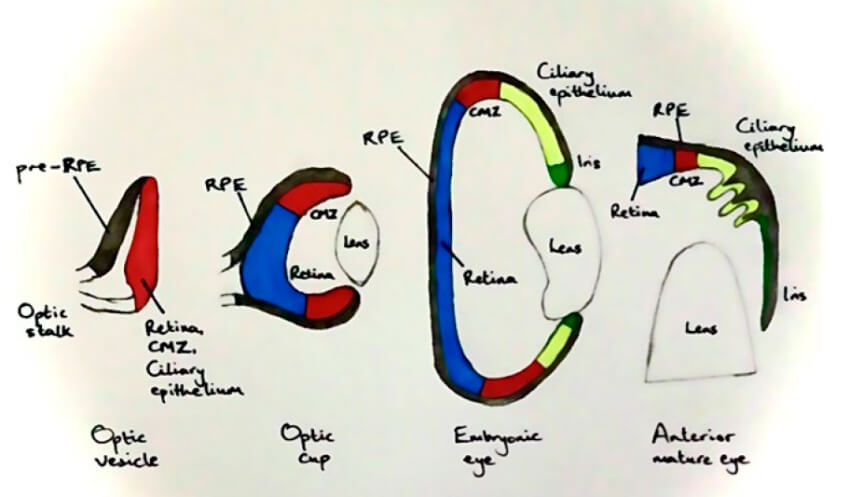 Pax6 is a crucial gene in eye development, and its main role is to initiate evagination of the optic grooves or sulci. The optic grooves later turn into optic vesicles, which make contact with surface ectoderm and induce the necessary developmental changes in this germ layer. The lens placode forms from thickening of the surface ectoderm adjacent to the optic vesicles. Optic cups further develop from the optic vesicles and interact with the retina while the iris and ciliary body develop from the central optic cup (Figure 2). 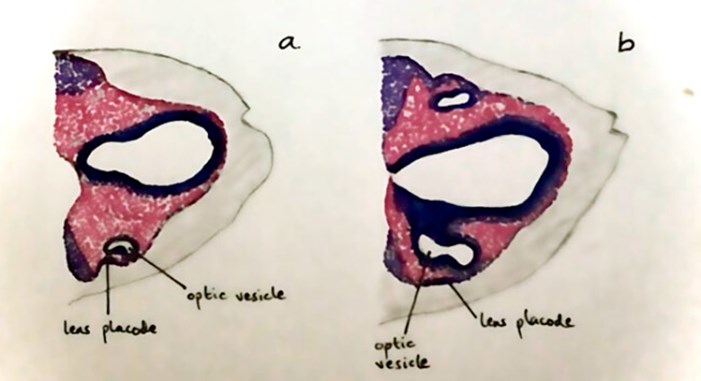 The lens vesicle is developed from continued thickening of the ectoderm and eventual separation from this layer. This stage of lens development is complete by week eight (Carnegie Stage 22) and the lens at this point measures ~400µm. Further growth takes place as epithelial cells in the lens germinative zone anterior to the equator undergo mitosis. Daughter cells migrate to the transitional zone posterior to the equator where they differentiate and elongate into secondary lens fibre cells. The new crescent-shaped fibre cells are deposited in concentric shells over older cells while synthesising large amounts of crystallin proteins in the bow region of the lens [6-9].

This is an extremely complex and delicate process on cellular and molecular levels, as these different germ layers must interact correctly to ensure that the visual axis and ocular architecture are maintained, allowing the eye to grow appropriately during childhood. Lens potential must also be actively suppressed in non-lens ectoderm in order to restrict lens growth in germ layers not destined to become lens tissue. Neural crest cells (NCCs) inhibit lens development except in the vicinity of the retina, ensuring the alignment of the lens and central retinal components. Transforming growth factor-β (TGF-β) is involved in this process, by activating both Smad3 and canonical Wnt signalling in the non-lens ectoderm. In the lens territory, both pathways prevent lens formation; however, their inhibition prevents lens suppression by NCCs. Smad3-mediated TGF-β and Wnt molecular signalling co-operate to restrict lens potential to the ectoderm overlying the retina, thus playing a critical role in the formation of a functional eye [10].

The pathogenesis of cataract formation in childhood is not completely understood. However, there are a range of causes thought to be associated with congenital and developmental cataracts.

Idiopathic congenital cataracts account for 50% of cases, and 30% are monogenetic with autosomal dominance being the most common inheritance pattern [11]. While other modes of inheritance such as autosomal recessive or x-linked are a possibility, it may also be associated systemic syndromes [8,11]. It is important to note it is not uncommon that genetic causes of congenital cataracts can present with other ocular anomalies such as aniridia, coloboma and posterior lenticonus among others [8,12] (Table 1). 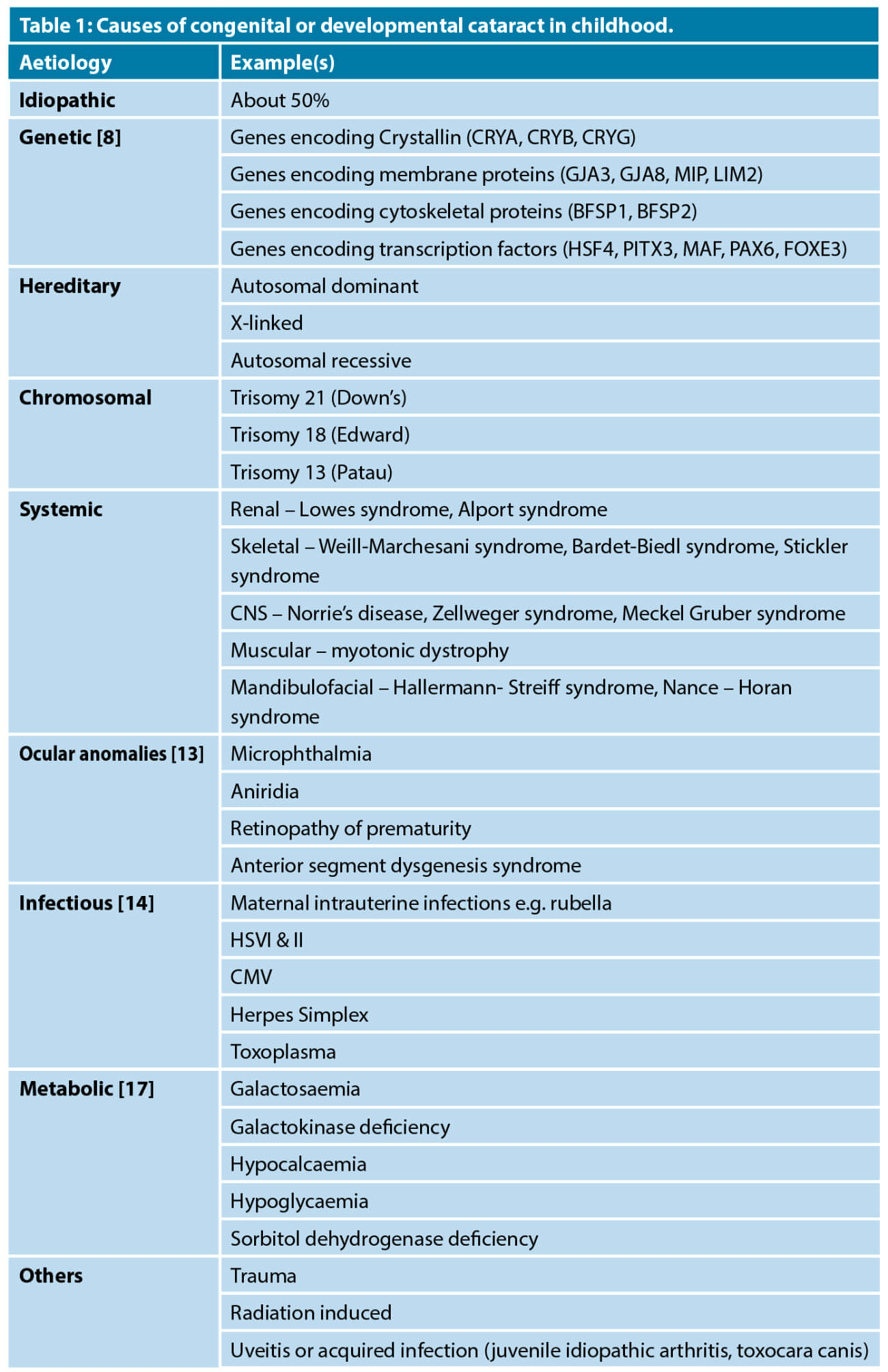 Several genetic components that influence congenital caractogenesis have been identified. Some of the key players implicated in genetic causes of congenital cataracts include crystallin, lens specific connexin, major intrinsic protein (MIP), paired-like homeodomain transcription factor 3 (PITX3), cytoskeletal structural proteins and heat shock transcription factor 4 (HSF4). Crystallin, in particular, a highly essential protein component of the lens, has been demonstrated to be affected in nearly 50% of congenital cataracts with recognised mutations [8]. It is thought that some mutations in genes encoding different types of crystallin can lead to improper aggregation and clearance of these proteins, which result in lens opacification seen in congenital cataracts. Missense mutations resulting in amino acid substitutions are the mainly dominantly inherited [11] and cause aberrant protein synthesis and lens opacity.

Unilateral congenital cataracts tend to be sporadic and can present as a result of TORCH pathogens (toxoplasma, rubella virus, cytomegalovirus, and herpes simplex virus (HSV) I and II). In these cases, it is thought that viral or parasitic infections during embryogenesis can influence the development of the crystalline lens. Maternal HSV infection is thought to affect foetal ectodermal tissue from which the lens is derived from, likely due to maternal IgG and IgM crossing the placenta and causing a degree of embryological lens disruption [15,16]. However, not all cases present with cataracts at birth, suggesting potential re-infective causes or triggers that re-activate the latent virus.

Developmental or juvenile cataracts tend to present within the first or even second decade of life. However, they are more likely to be associated with inherited metabolic diseases such as galactosaemia. Even so, there is still a degree of overlap between congenital and developmental onset [17]. Galactosaemia is a rare disorder that leads to a build up of galactose due to enzymatic deficiencies in glucokinase or galactose-1-phosphate uridyl transferase. This can result in the formation of oil-droplet cataracts which vary in the pattern of onset; early dietary changes have been shown to potentially reverse cataracts in this condition [4,17]. Glucose accumulation in aqueous humour and lens due to osmotically induced cataract can also occur in diabetes.

The use of steroids and traumatic eye injury are also associated with the occurrence of developmental cataracts. Traumatic injury is more common and affects boys more than girls. It is important in these cases to rule out foreign objects within the eye or the orbit. Steroids are a rarer cause of developmental cataracts and typically cause those in the posterior subcapsular category [4,14]. They are particularly due to long-term systemic use of steroids, an example shown in a case of Langerhans cell histiocytosis in a seven-year- old child. Although the mechanism remains elusive, it has been proposed that glucocorticoids could have an osmotic and / or oxidative effect on the lens which causes opacities, reduced visual acuity, glare and eventually leading to developmental cataract [18]. 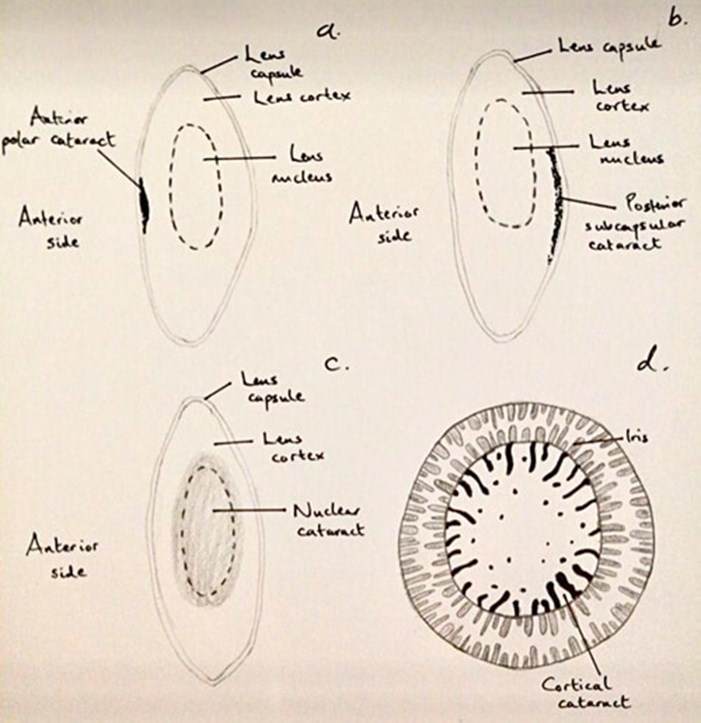 Other than classification by underlying pathology, a cataract can also be classified by its location and morphology. For example: polar (anterior or posterior), zonular (nuclear, lamellar, or sutural) and capsular [13,14] (Figure 3). Polar cataracts – in particular, anterior polar – are the most common congenital cataracts and have a strong hereditary history, especially if presenting bilaterally. Although bilateral congenital cataracts tend to be more indicative of an inherited mode of pathogenesis, nearly half of sporadic cataracts were shown to be bilateral in an Australian study [15].

In a brief summary, paediatric cataracts are rare but can lead to amblyopia and cause significant blindness if left untreated.

The pathogenesis is not fully understood, but genetic mutation, metabolic disease and oxidative damage are thought to be some causes of cataract formation in childhood. While about half of the cases are thought to be idiopathic, there are numerous systemic and ocular associations related to congenital or developmental cataract. Lloyd et al. have published a schematic diagram to aid diagnostic steps of a neonate or child presenting with cataract (Figure 4). 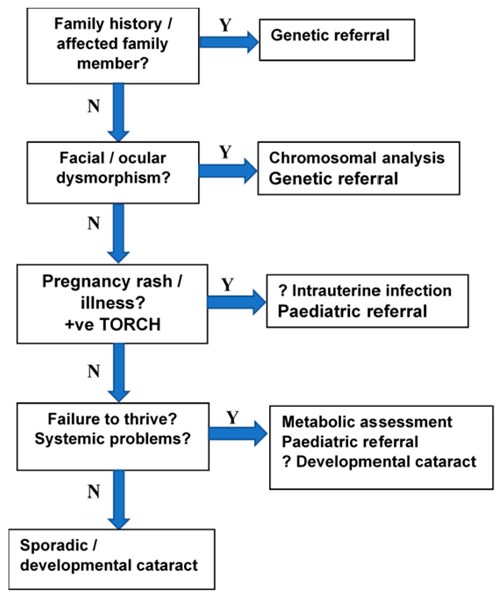 In our next article, we will cover the clinical presentation, investigation and challenges associated with the management of paediatric cataracts! 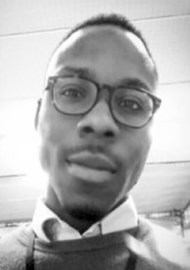