The authors review the current treatment options for this condition.

Radiation retinopathy (RR) occurs as a complication after exposure to any type of radiation (external beam, plaque brachytherapy and stereotactic radiosurgery) in the orbital or adnexal region. These include nasopharyngeal and paranasal sinus tumours, or orbital tumours such as choroidal melanomas, retinoblastomas and choroidal metastasis. Radiation is also used to treat benign conditions such as in thyroid ophthalmopathy, exudative inflammatory processes of the posterior segment, age-related macular degeneration and choroidal haemangioma.

It was first described in 1933 by Stallard and has been seen in several case reports. According to a number of case reports, the most common cause of radiation retinopathy in the UK appears to be external beam therapy [1]. Radiation retinopathy is often dose, daily fraction size and fraction interval dependent, with the usual threshold dose for retinal damage at 30-35Gy [1].

The time of onset varies greatly and can occur between one month to 15 years after exposure, but most commonly occurs between six months and three years. A recent retrospective study reported an incidence of proliferative radiation retinopathy of 5.8% at five years, 7% at 10 and 15 years in 3841 of the eyes treated with plaque radiotherapy for uveal melanoma [2].

Radiation causes microangiopathy of small retinal vessels secondary to endothelial cell loss and capillary closure in the posterior segment, which is more sensitive than the peripheral retina. A preferential loss of vascular endothelial cells and sparing of pericytes differentiates it from diabetic retinopathy. The hypothesised pathophysiology is due to direct exposure of endothelial cells to high ambient oxygen and iron found in the blood, which generates free radicals, leading to cell membrane damage [4-5]. Other clinical signs of RR include macular oedema, microaneurysms, telangiectasias, neovascularisation, rubeosis, neovascularisation of the retina, vitreous haemorrhage and tractional retinal detachment [1].

Symptoms are dependent on stage of retinopathy. Patients with early or mild retinopathy may be asymptomatic initially. However, with late progression, patients can report blurred vision or floaters [9].

Radiation retinopathy is mainly distinguished from its differentials (Table 1) from the history, particularly with identified exposure to ionising radiation. Systemic vascular risk factors can be assessed with basic investigations such as blood pressure readings, blood tests including full blood count with antibody, vasculitis screen, electrolyte panel, lipid screen and random blood glucose. Other investigations such as a carotid doppler ultrasound or a thorough history taking of past medical history, particularly blood disorders, drug history and social history such as a positive history of smoking are also pertinent to diagnosis [10].

In RR there is atrophy of the retinal pigment epithelium (RPE) and also less microaneurysms presented compared to diabetic retinopathy or other retinal vasculopathies. Additionally, neovascularisation does not typically extend through the internal limiting membrane into the vitreous. Telangiectatic vessels can also be present in radiation retinopathy but this is rarely the only feature seen and thus differentiates it from perifoveal telangiectasia [11-12]. 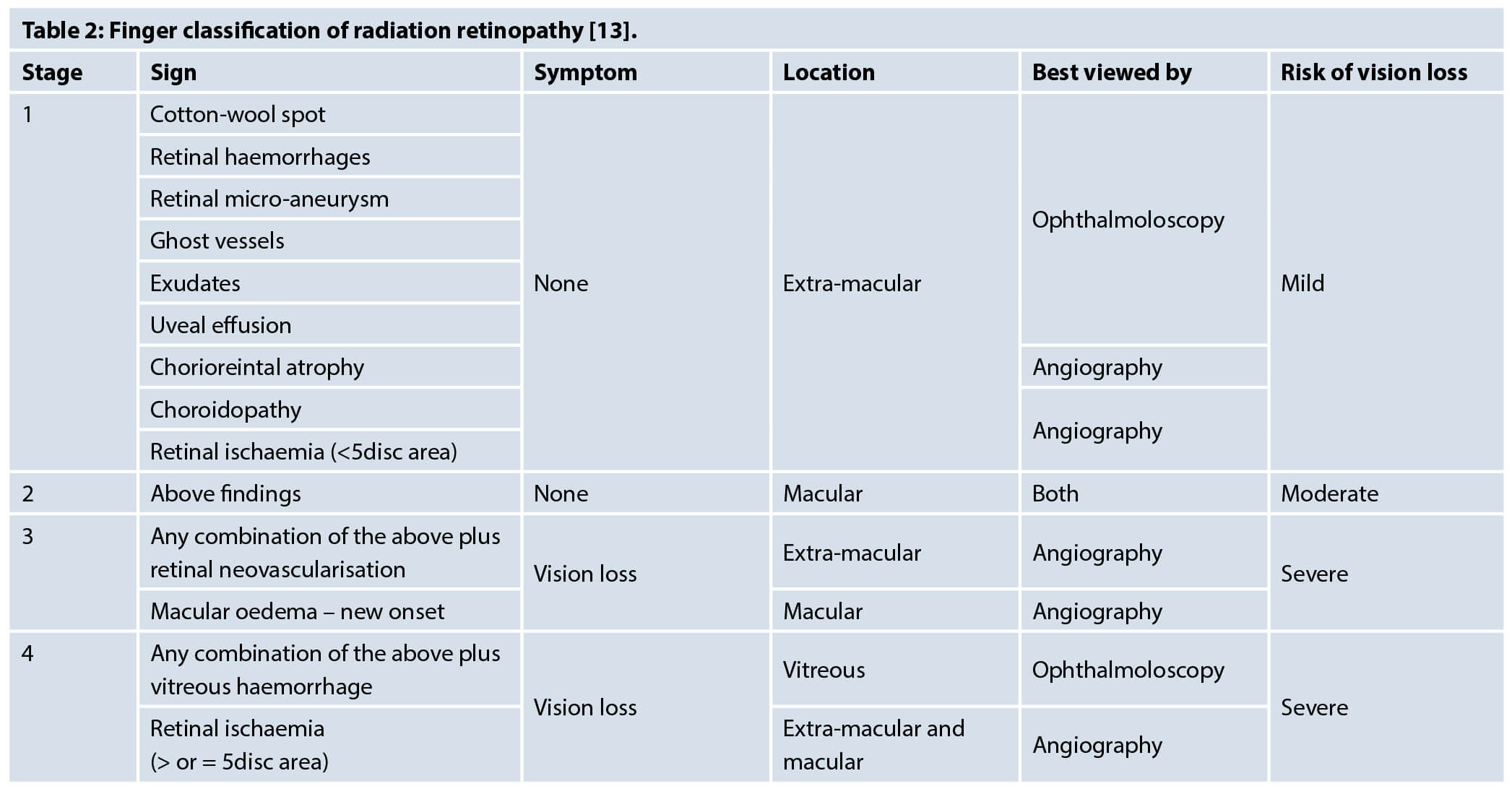 There are currently no National Institute of Health & Care Excellence (NICE) established treatment guidelines for RR. As there are many clinical similarities between RR and diabetic retinopathy, treatment that is presently used follows a similar therapeutic principle, which is to reduce macular oedema and prevent neovascularisation. Common treatment modalities include the use of laser photocoagulation, corticosteroids and anti-vascular endothelial growth factor (anti-VEGF) agents, such as Bevacizumab and Ranibizumab [14-19, 22-26].

Treatment decision should be made in conjunction with visual prognosis, in particular, the presence of macular ischaemia. Minor degrees of retinopathy such as subtle capillary fallout or occasional dilated channels and micro-aneurysms may not affect vision and may remain stable for years. Thus, no treatment might be necessary but patients might require annual follow-up as the disease is slowly progressive [20].

Laser photocoagulation can be used as focal therapy for macular oedema and exudation, or scattered / pan photocoagulation in controlling neovascularisation. Fovea involving macular oedema remains the major cause of visual loss in patients with RR. Hykin et al. reported 42% of the affected eyes had an improvement of one line on Snellen chart at six months when compared to the observational group, but the difference at 12 and 24 months was not significant. Axer-Siegel et al. also demonstrated improvement of retinal thickness and resolution of exudates with focal laser, but visual outcome only improved marginally [21].

Pan-retinal photocoagulation (PRP) is used as the treatment for many forms of ischaemic retinopathies and might be used in patients with high risk characteristics for vision loss such as neovascularisation of optic disc and vitreous haemorrhage. Reports in the literature have shown PRP to cause regression of neovascularisation in RR. This is achieved by targeting area of ischaemia through angiography [14]. In a study of 45 patients, Finger et al. found that sector argon laser photocoagulation regressed clinically evident RR in 64.4% patients with early onset retinopathy. However, a third of this group still sustained a loss of three or more lines in vision due to radiation maculopathy [13].

For prophylactic photocoagulation, the evidence remains unclear and long-term data is required.

Photodynamic therapy (PDT) is mainly used to cause regression of neovascularisation. It is comprised of a two-step process in which an intravenous infusion of verteporfin is followed by irradiance with a 689nm laser for around 83 seconds. Verteporfin binds to serum lipoproteins which bound favourably to choroidal new vessels. PDT induces formation of toxic oxygen species that leads to subsequent thrombosis of these new vessels. Several case studies have reported improved visual acuity after PDT. However, the use of photodynamic therapy has been insufficiently investigated for long-term prognosis and more evidence is required in terms of efficiency and safety [14].

Intravitreal corticosteroid injections are used to reduce radiation-induced macular oedema. Specifically, the use of triamcinolone acetonide has been reported to help achieve visual stability by Shields et al. [21]. Intravitreal dexamethasone implants have also been reported to reduce macular oedema. Some authors proposed that steroid reduces the osmotic swelling of Muller’s cell, while others suggested that it stabilises endothelial tight junctions and therefore reduces leukocyte migration [21]. Due to the associated side-effects of cataracts and raised intraocular pressure, alternate treatment should be considered for younger patients and those at risk of glaucoma.

Horgan et al. published more recently a randomised, controlled trial looking at periocular injection of triamcinolone for prevention of macular oedema. Periocular triamcinolone was given at the time of 125I plaque application with patients with uveal melanoma. This has shown some promising results in reducing risk of macular oedema up to 18 months after plaque radiotherapy [15].

Humanised monoclonal anti-vascular endothelial growth factor (VEGF) antibody has been shown to help improve macular oedema and to reduce intraocular neovascularisation. Studies have shown varied improvement in visual acuity, either as single injections or multiple treatments [16-18]. The variation is hypothesised to be due to age and duration of macular oedema prior to treatment, with an older age and long-standing oedema associated with reduced treatment effect. A study demonstrated that a single injection of Bevacizumab reduced mean foveal thickness and improved mean visual acuity six weeks after injection in patients with macular oedema. However, this was not sustained and four months following injection, mean visual acuity (VA) returned to pre-treatment levels with an increase in foveal thickness [22]. Another study demonstrated that injections of Bevacizumab every six to eight weeks following diagnosis of retinopathy improved or stabilised visual acuity in all treated patients with a mean follow-up of 4.7 months following first injection. Continued treatment up to 18 months also helped improve and achieve stability in visual acuity in the majority of patients [23]. 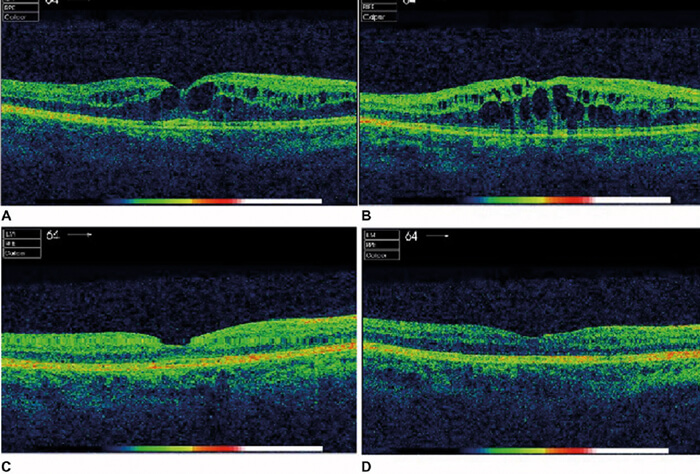 There are currently no published clinical trials to compare different commercially available anti-VEGF. Ranibizumab was used in a patient with radiation maculopathy with previous tachyphylaxis to Bevacizumab and showed excellent response [24]. In a different case report, Aflibercept showed an improvement on OCT macular thickness (Figure 1) and VA improved from 6/18 to 6/15 after a total of three intravitreal injections [19].

Alternative treatment modalities have been reported in the literature to treat various causes of RR with mixed results and are not used extensively.

Hyperbaric oxygen therapy (HBOT) improves oxygenation and is hypothesised to counteract hypoxic cells in radiation induced vasculopathies and neuropathies. One case report has shown improvement of clinical picture in terms of retinal exudates and visual fields following HBOT, however, visual acuity did not significantly improve [27].

Radiation retinopathy causes significant visual morbidity following radiation to the head and neck region due to macular oedema and the risk of choroidal neovascular membranes. Current treatment which aims to target this includes laser photocoagulation, corticosteroid and anti-VEGF injections and have reported varying degrees of success. Decision on which treatment to use also depends on the patient’s lens status, risk factors of glaucoma and their visual prognosis. More effort recently has been put in to investigate early treatment in preventing radiation retinopathy. 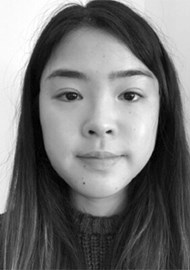 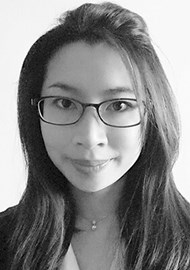