Central serous chorioretinopathy (CSCR) is a common retinal disease characterised by one or more serous neurosensory detachments. Patients present with acute onset blurring of vision, metamorphopsia and / or central scotomas.

The condition is six times more common in men than women and reportedly more prevalent in the Asia Pacific region [1]. In Asia the condition is also more aggressive and will more frequently present bilaterally or as multifocal CSCR [2]. Even so, more than 80% of CSCR presents in an acute manner and resolves spontaneously within three months. For these patients no treatment is required and the majority will recover their vision fully. Average final visual acuity for spontaneously resolving CSCR is 20/30 [3].

What can be done to avoid recurrences or accelerate remission?

CSCR is associated with risk factors including type A personality, systemic steroid use and excess caffeine. Reducing sources of stress and caffeine intake and minimising or excluding exogenous steroid is advised (Figure 1). 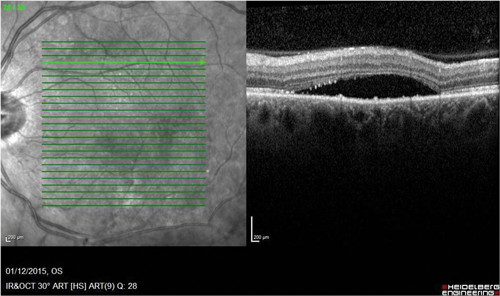 What if the condition lasts more than three months?

Although CSCR is often self limiting, in some patients it may become chronic. If it lasts more than three months, treatment is recommended to avoid irreversible sight loss [4]. 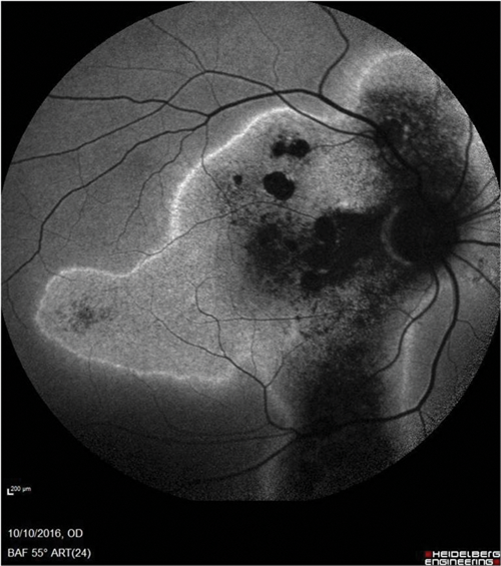 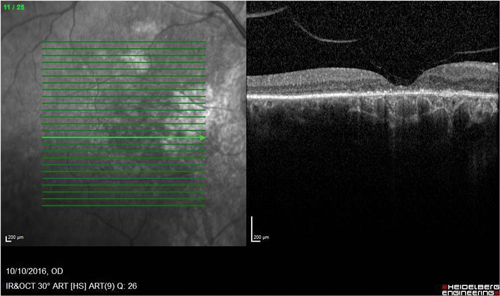 Figure 2: Consequences of chronic CSCR. (Top) Autofluorescence image of the right fundus showing widespread damage and atrophy of the retinal pigment epithelium and a ‘gravitational’ appearance. (Bottom) OCT scan of the same eye showing photoreceptor loss and RPE damage as well as abnormalities in the choroid.

Sight loss is due to photoreceptor damage and atrophy of the retinal pigment epithelium (RPE) (Figure 2). There are many different treatment options for chronic CSCR and no standard guidelines published on treatment protocols [5]. The treatment options range from systemic treatment to photodynamic therapy, as well as argon laser and micropulse laser treatment. Unlike other retinal conditions, anti-VEGF does not appear to be a useful treatment modality.

What is the role of systemic treatment and which therapies are available?

Although the pathogenesis of CSCR remains poorly understood, it is widely believed that overaction of the mineralocorticoid receptor is involved. For this reason, mineralocorticoid receptor antagonists have been successfully used to treat chronic CSCR. Spironolactone and Eplerenone have proven better than observation alone at treating chronic CSCR. A randomised control crossover study on the use of Spironolactone for chronic CSCR showed a statistically significant treatment effect with spironolactone as compared to placebo (p=0.04) [6]. Eplerenone has also shown encouraging results in non-randomised pilot studies to improve visual acuity (p<0.001) and reduce central macular thickness (p<0.01) with three months of treatment [7].

When would photodynamic therapy normally be considered?

Photodynamic therapy (PDT) works by causing short-term choriocapillaris hypoperfusion and long-term choroidal vascular remodeling, which reduces choroidal congestion, vascular hyperpermeability and extravascular leakage [8,9]. Multiple studies have now shown the long-term treatment efficacy of PDT for CSCR. A four-year retrospective review showed a mean gain of 8.7 letters with three quarters of patients gaining at least five letters [10]. Only four eyes (9%) had a reduction in vision and this was attributed to thinning of central macular thickness (CMT) and loss of IS/OS junction. PDT has, however, been associated with side-effects such as RPE rips and subretinal haemorrhage, which is a concern when treating CSCR patients with good pre-treatment visual acuity. For this reason, modified treatment protocols such as half dose, half fluence and half time PDT have been reported. A recently published retrospective review of 136 eyes in 123 patients treated with half dose PDT with long-term follow-up ranging from 36-96 months showed 97.1% of patients having complete resolution of subretinal fluid at final follow-up [11]. Recurrence of CSCR was reported in 6.6% of patients and a history of bilateral CSCR was significantly associated with recurrence. The same study also showed that baseline best corrected visual acuity (BCVA) was significantly associated with final visual acuity after treatment. The recommendations are therefore to treat CSCR in a timely manner before significant visual deterioration.

What about different PDT regimens?

Numerous published studies compare the different modified PDT treatment protocols. A randomised controlled trial (RCT) comparing half dose with half time PDT showed no difference in treatment efficacy or safety [12]. However, in a study by Uetani et al., with half dose PDT all patients have anatomical resolution of CSCR compared to only 33% with one third dose PDT [13].

Will patients respond to PDT?

Indocyanine green angiography is used to image the choroidal vasculature. In patients with CSCR, it is often observed that the choroid is hyperpermeable and this can be demonstrated on indocyanine green (ICG). The use of PDT is believed to be more efficacious in such patients.

What about standard laser treatment?

Argon laser photocoagulation has been reported to achieve resolution of CSCR but is also associated with a high complication rate of paracentral scotomas, contrast sensitivity loss, distortion and choroidal neovascularisation [14].

Where is the laser treatment directed?

Fundus fluorescein angiogram can be used to investigate CSCR and may show a focal leak (‘smoke stack’ or ‘ink blot’) throughout the run. If such a leak is demonstrated and if this is extra-foveal, then laser may be used. Complications are reduced if the site of the leakage is far away from the foveal centre.

Can the risks be minimised by the use of micropulse laser?

The risks of standardised laser have been significantly reduced with the advent of subthreshold micropulse laser (SML) treatment. SML delivers effective nondestructive treatment for both subfoveal and extrafoveal CSCR lesions with no significant retinal damage discernible postoperatively.

Micropulse laser delivers only 5% of the stimulus duration in a series of short rapid fire pulses. A number of case series have reported the safety and efficacy of diode laser (810nm) SML in CSCR and a large RCT (PLACE trial) comparing diode SML with PDT is currently recruiting patients [15]. A new wavelength of SML, 577nm yellow laser, reportedly has the advantage of superior absorption in the RPE layer over 810nm SML. Small case series have reported the use of yellow (577nm) to treat chronic CSCR but there are no RCTs planned to compare its treatment efficacy with that of 810nm SML or PDT to our knowledge.

Is there a role for combination therapy?

Department of Ophthalmology and Visual Sciences, The Chinese University of Hong Kong.