The interpretation and use of ultrasound biomicroscopy (part 1)
By Rizwana Siddiqi, Pravin Pandey and Peter Good

Ultrasound Biomicroscopy (UBM) has become increasingly important for the diagnosis of a variety of anterior segment pathologies. Most ophthalmologists are familiar with conventional B-scan ultrasonography techniques, which operate at lower sound frequencies (7.5 to 20MHz). UBM is an ultrasound technique developed by Pavlin and Foster in 1980. It allows high resolution, non-invasive, in vivo imaging of the anterior ocular segment, visualised as two-dimensional gray-scale images. Evaluation is both quantitative and qualitative.

There are many applications of this imaging method, though in our unit it is overwhelmingly used to study the angle in patients with angle closure. We provide a few examples of some other clinical indications.

What is ultrasound biomicroscopy?

The linear UBM provides a lateral resolution of 60µm and an axial resolution of 35µm with a depth of focus of 12mm. Linear scanning gives a better signal intensity, as the probe is always perpendicular to the tissue interface of interest. UBM has a distinct advantage over anterior segment optical coherence tomography due to its use of high-frequency sound waves rather than coherent light to obtain images posterior to the iris, including the angle, ciliary body, crystalline lens or intraocular lens. 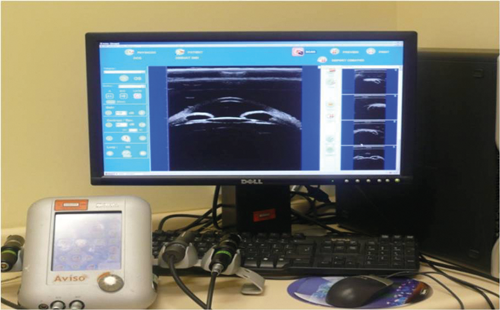 Multi-probe platforms have revolutionised ocular echography examinations (Figure 1). Previously described as cumbersome, UBM linear probes have made the technique more flexible allowing both supine and prone examination. Using either the clear scan or immersion technique (Figures 2 and 3), images are obtained by scanning over the area of interest. For patients with angle closure, scans are obtained in both scotopic and photopic conditions. Images are acquired in the primary position as well as in four positions of gaze. 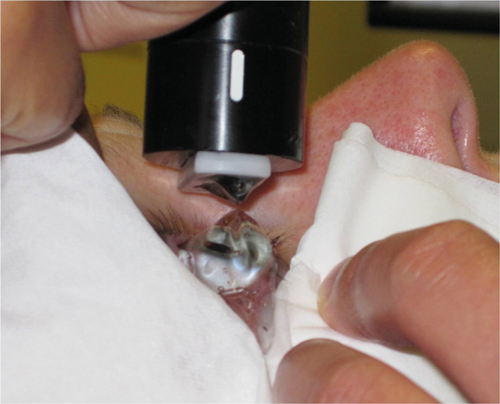 What are the clinical indications for UBM examination?

UBM, for glaucoma is usually used to visualise the angle, position and configuration of the iris and ciliary body, iris / ciliary body cysts as well as the identification of ciliary body tumors, cyclodialysis clefts, iris retinoschises and angle recession. In cataract and refractive surgery it may be used to evaluate phacomorphic lenses, dislocated intraocular lense (IOLs), misplaced haptics and sulcus-to-sulcus measurements for implantable lenses. In patients with uveitis it can identify pars planitis, fibrin, retained lens fragments, supracilliary effusions and cyclitic membranes. Post trauma UBM examinations come into their own and allow examination of the above structures in the presence of 8-ball hyphaemas or opaque media from other causes such as corneal oedema and scarring. This list is by no means exhaustive; UBMs can be also be used to examine the lids, conjunctiva, cornea and adnexae. 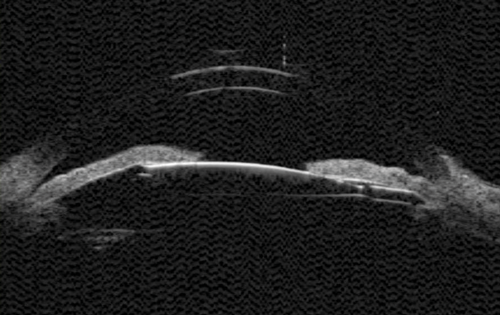 A patient who presented with persistent uveitis, raised pressure (glaucoma) and hyphaema (UGH syndrome) after cataract surgery appears to have an IOL haptic making direct contact with the posterior aspect of the iris (Figure 4). Unlike optical coherence tomography (OCTs), UBMs can more easily identify structures posterior to the iris. To facilitate the examination and direct the examiner to the appropriate area in the eye, it is useful for the clinician to indicate the position of the haptic / iris transillumination prior to the scan. 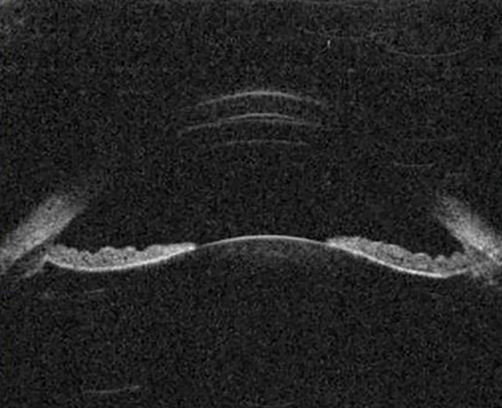 PDS results from the dissemination of pigment granules from the posterior surface of the iris as a result of friction between it and the zonules and / or lens. PDS typically demonstrates an open angle and iris concavity with reverse pupil block consistent with the hypothesis that irido-zonular chafing is responsible for the dispersion of pigment particles (Figure 5). 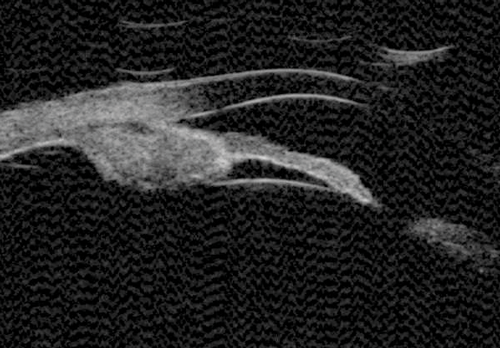 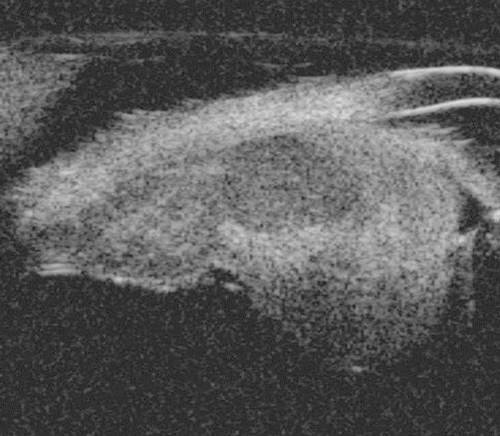 Figure 6b: Melanoma obliterating the angle and extending posteriorly involving the pars plana.

The most common anterior segment tumours imaged in ophthalmology are iris tumours, these can be both pigmented and non-pigmented; irido-ciliary cysts; iris tumours that involve the ciliary body; and ciliary body tumours. In lightly pigmented irides, the iris pigment epithelium can be clearly imaged with UBM and anterior segment OCT (AS-OCT). AS-OCT is able to delineate the border of thicker-walled cysts but cannot penetrate the iris pigment epithelium. UBM therefore remains the best method of imaging and following up the majority of anterior segment tumours. Some examples include: ciliary body melanoma (Figure 6), ciliary body lesion (Figure 8) and iris hamartoma (Figure 9). 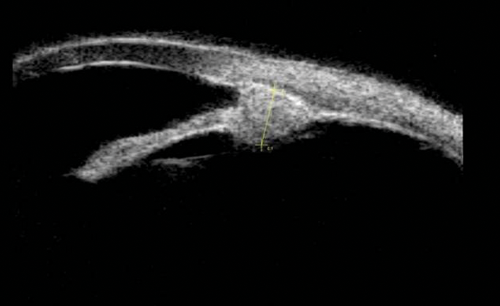 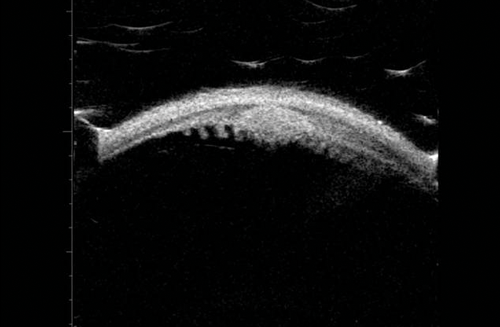 Figure 7b: Which can be seen amongst the ciliary processes. 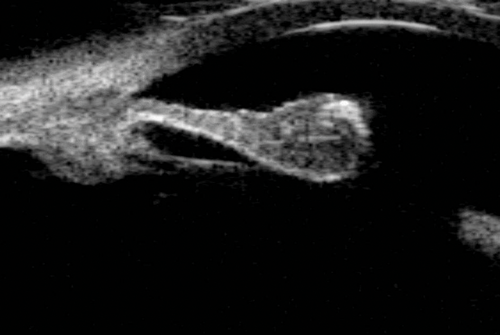 Figure 8: An iris hamartoma at the pupillary margin. UBM can be used to visualise the lesion and monitor its size. 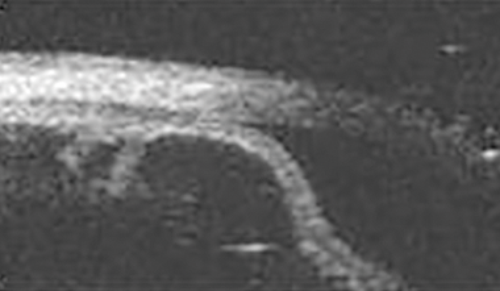 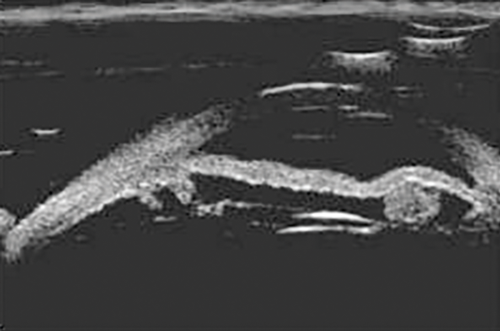 Figure 10: Large thin-walled, irido-ciliary, echolucent cysts may cause
displacement of the IOL and subsequent reduction in visual activity. 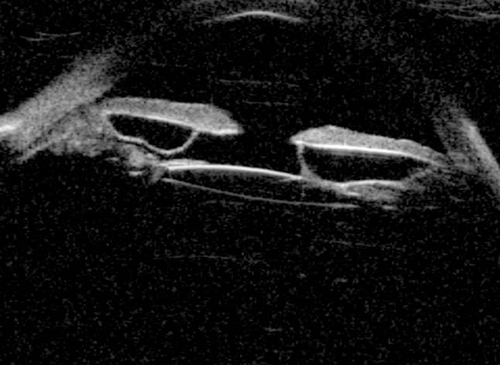 UBM is the gold standard when evaluating and following up irido-ciliary cysts. These are visualised as thin walled echolucent lesions (Figure 9). Figure 10 shows large irido-ciliary cysts causing IOL displacement. Figure 11 shows a non-axial UBM exploring a lesion that was initially referred as a melanoma. This was a pseudophakic eye with a lens remnant. A clear demarcation can be seen between the lens fragment and the iris, as apposed to melanomas, which are more homogenous (as in Figure 7). 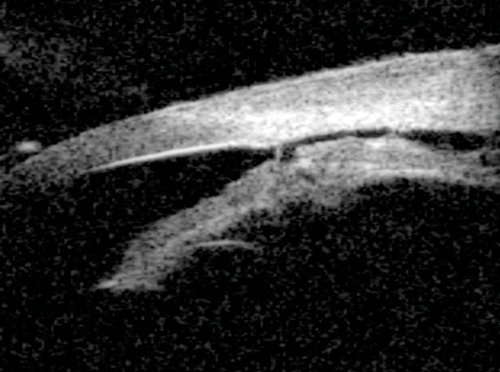 Figure 12: Blunt trauma causing cyclodialysis cleft. A direct communication between
the supra-ciliary space and anterior chamber can be visualised.

Cyclodialysis clefts can be iatrogenic or more commonly secondary to contusion injuries. Defined as a disinsertion of the ciliary body from the scleral spur, the injury allows access to the suprachoroidal space resulting in hypotony. Visualisation of the supraciliary fluid and the connection from the anterior chamber to the supraciliary space confirms the diagnosis of a cyclodialysis cleft (Figure 12). Direct gonioscopy once the eye is filled with viscoelastic is the definitive way of determining the location and extent of the cleft, principally because the iris will otherwise obscure the angle. UBM is useful in this scenario as it provides a way of knowing the location and extent of the cleft without physically entering the anterior chamber. 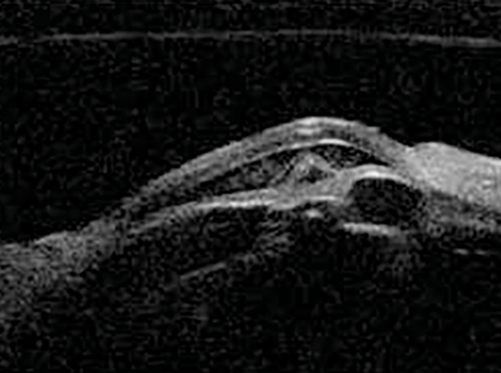 Intraocular foreign bodies are usually hyper reflective and show up readily in UBM examinations especially in the anterior chamber (Figure 13). B scan ultrasonography is the investigation of choice for when the foreign body is in the posterior segment. Due to the many clinical entities that can be identified, beyond coherent light machines where the iris blocks more posterior structures, providers have embraced ultrasound biomicroscopy. Its use has migrated from academic to hospital settings. Even as its present indications provide numerous clinical applications, innovative researchers, clinicians and technicians will discover further diagnostically fruitful uses for UBM in years to come.

See Part 2 for more on this topic.